Adequate daily nutrient intake is one of the most important factors contributing to the achievement of healthy aging. In this study, we investigated changes in blood nutrients over a 2 years and 9 months period in normally nourished, independent- living, older adults who were over 75 years of age.
Thirteen older adults (mean age 82.5 ± 5.2 years) participated in this study. Individual physical characteristics, nutritional status, dietary nutrient intake, and blood nutrient concentrations were measured in March 2009 and again in December 2011. The values of the anthropometric measurements, including height, weight, body mass index, mid-arm circumference, and calf circumference, decreased with advancing age. Estimated nutrient intakes revealed that all participants were well-nourished, although the estimated zinc intake of the male participants was slightly lower than the recommended dietary allowance. At the second measurement, in December 2011, serum zinc concentrations had decreased from March 2009 levels by 23% and 19% in the male and female participants, respectively.
Our results imply that normally nourished older adults over 75 years of age may develop zinc insufficiency with increasing age. Increased dietary zinc intake and zinc supplementation might be important for older people, even if they are normally nourished based on dietary survey information.

The number of older people in the world has been increasing at an unprecedented rate. According to the 2015 Revision of the World Population Prospects by the United Nations Population Division, the worldwide population estimates for people aged 60 years or over and aged 70 years or over (in the me dium-fertility population model) are 1.05 billion and 457 million in 2020, and 2.36 billion and 1.35 billion in 2060, respectively [1]. In Japan, the population estimates for people aged 60 years or over and aged 70 years or over are 42.9 million and 27.4 million in 2020, and 43.1 million and 31.3 million in 2060, respectively [1]. With these estimated increases in the population of older people, the need for lifestyle support and nursing care for the aging population is emerging as a pressing social issue, especially in developed countries such as Japan. There is a 7 to 9 years gap between life expectancy and healthy life expectancy [2]. Successful aging, including avoidance of disease and disability, maintenance of high physical and cognitive function, and sustained engagement in social and productive activities, is now an important public health focus [3].
Nutrition/diet quality is one of the major determinants of successful aging [4-6]. Poor nutritional status or low diet quality in older people is known to be an independent risk factor for progressive health decline, reduced physical and cognitive functional status, increased utilization of healthcare services, early institutionalization, and increased morbidity and mortality [7-9]. Various nutritional screening tools have been developed to allow early recognition of malnutrition or undernutrition in older adults; these include the Geriatric Nutritional Risk Index (GNRI), the Mini Nutritional Assessment (MNA), the Mini Nutritional Assessment Screening Form (MNA-SF), and the Malnutrition Universal Tool (MUST) [10-13]. In addition, recent studies have shown that nutrition/dietary patterns are associated with brain biomarkers of Alzheimer's disease and the rate of cognitive decline, suggesting the that dietary interventions may be an effective means of preventing Alzheimer's disease and cognitive impairment [14-16]. Other studies suggest the efficacy of dietary interventions for prevention of sarcopenia [17, 18].
Although older people eating a balanced diet might be assumed to be normally nourished, the rate of digestion and gastrointestinal absorption of nutrients may decrease with advancing age. Thus, older people may require a greater intake of certain nutrients than the current recommended dietary allowance (RDA) [19]. Additionally, few longitudinal studies have assessed the nutritional status of normally nourished older adults. Therefore, in this study we performed nutritional assessments of independent-living older adults over 75 years of age who were classified as normally nourished. All participants underwent two serum biochemistry analyses, the first in March 2009 and the second in December 2011. The serum concentrations of dietary nutrients were compared to identify which nutrient concentrations decreased during the 2-year and 9-month interval between the tests.

A baseline study was conducted of 33 people who were members of a senior citizens'club in Ichikawa, Japan in March 2009, when the participants were mean age 78.3 ± 5.9 years, and follow-up study was subsequently conducted in December 2011. In the research describe here, analysis was conducted of 13 people (7 men and 6 women) who participated in both the baseline study and the study conducted 2 years and 9 months later, when they were mean age 82.5 ± 5.2 years. All of the analyzed subjects were healthy and were living independently, without receiving any special nursing care. Individual physical characteristics, including height, weight, body mass index (BMI), mid-arm circumference (MAC), and calf circumference (CC), were measured. Nutritional status was assessed with Mini Nutritional Assessment (MNA), which is a nutritional screening tool used worldwide [11]. The full MNA® has been validated to classify whether older adults have a "normal nutritional status", are "at risk for malnutrition", or are "malnourished". Score ranges of 24-30 points, 17-23.5 points, and 0-17 points correlate with normal nutritional status, at risk for malnutrition, and malnourished, respectively. A self-administered diet history questionnaire (DHQ) and brief self-administered diet history questionnaire were administered in March 2009 and December 2011, respectively, to further evaluate the nutritional status and dietary intake of the participants [20-22].
Blood samples were collected into anticoagulant- and geltreated tubes at 9-10 a.m. after an overnight fast for whole blood sample analysis and serum separation, respectively. Whole blood samples were used to determine hematological values and the hemoglobin A1c ratio. Blood samples in geltreated tubes were stored at room temperature for 30 min to allow the blood to clot. Serum was then separated by centrifugation at 1,500 × g for 10 min at 4°C, and the following serum parameters were measured: total protein, albumin, transthyretin, asparagine transaminase (AST), alanine transaminase (ALT), ?-glutamyltransferase (?-GT), cholinesterase, urea nitrogen, creatinine, uric acid, lipids, glucose, sodium, potassium, chlorine, calcium, magnesium, inorganic phosphorus, iron, zinc, folic acid, vitamin B12, and vitamin C concentrations. Biochemical measurements were performed by SRL Inc. (Tokyo, Japan).
Data were analyzed by paired t-tests and regression analysis using Microsoft Excel 2013. Differences were considered statistically significant if P < 0.05. The study protocol was explained to the participants, and each participant gave their written informed consent prior to participation. This study was approved by the Wayo Women's University Human Ethics Committee (No. 0811 and 1103).

Table 1: Physical characteristics of the participants.

Serum levels of glucose, lipids, creatinine, urea nitrogen, uric acid, and HbA1c, and activities of marker enzymes were unchanged and in the reference range, suggesting that the participants had been in a relatively good health condition for their age for 2 years and 9 months. Serum levels of vitamin C and zinc levels in both men and women, and serum levels of folic acid and vitamin B12 in women, declined significantly between the two tests, although their levels, except for serum zinc, were still above the mid-value of the reference range. The serum zinc concentrations were less than the mid-reference range value (87.5 μg/dL; reference range = 65-110 μg/ dL) in December 2011 in 11 of the 13 participants (6 men and 5 women) (Figure 1). 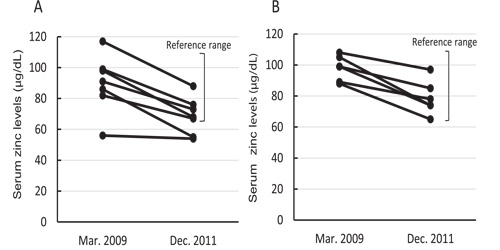 Figure 1: Changes in serum zinc levels in men (A) and women (B). The reference range for serum zinc concentrations in male/female adults was 65-110 μg/dL.

In this study, we found that serum concentrations of folic acid, vitamin B12 and C, and zinc decreased over a 2-year and 9-month period in normally nourished participants over 75 year of age (Table 3). This suggests that older people might be prone to micronutrient insufficiency. In particular, the decrease in serum zinc concentrations in older men may have adverse effects because zinc levels decreased to the lower limit of the reference range. We also confirmed that serum albumin declined more with greater decreases in serum zinc (Figure. 2B). Other micronutrients that are essential for successful aging, such as vitamins B1, B6, and D, may also decrease with aging, although we did not assess these micronutrients in the study [25-27].
Zinc is an essential trace element required for many cellular processes, including cell proliferation, normal development, and maintenance of normal immune responses [28]. Multiple studies worldwide have reported age-associated declines in blood zinc levels [29, 30]. Such declines in serum zinc levels may reduce immunocompetence, leading to an increased susceptibility to certain infectious and age-related diseases. One report suggested that older adults who consumed an adequate amount of zinc in their food were able to maintain serum zinc levels, but had elevated urinary zinc excretion compared with middle-aged people [31]. However, that finding was based on a cross-sectional study and to our knowledge no previous longitudinal studies reporting an age-associated decline in serum zinc levels exist.
Several factors affect serum zinc levels; these include dietary zinc intake as well as zinc absorption and excretion. Dietary zinc intake in men was slightly, but not significantly, less in December 2011 than in March 2009. However, this was not the case in the female participants, which suggests that age-associated reductions in absorption and/or increased excretion of zinc may affect serum zinc levels more severely than zinc intake in normally nourished older adults. Further investigation into the mechanism underlying the rapid decline in serum zinc levels in adults over 75 years of age is needed. Although the average serum zinc concentrations in December 2011 were within the reference range in both men and women, it is likely that a further decline would occur with increasing age. If so, zinc insufficiency or deficiency might occur in older adults even if they apparently consume an adequate amount of zinc in their diet. Because decreases in serum zinc concentrations were associated with decreases in serum albumin levels, and because zinc deficiency may play a major role in age-associated dysregulation of immune function and chronic low-grade systemic inflammation, prevention of zinc insufficiency by dietary zinc supplementation may be an effective means of delaying senescence and achieving healthy aging [23,24,32]. In mice, zinc supplementation has been shown to reduce ageassociated inflammation [33]. Individuals with the G/G variant of the IL-6 -174G/C locus (rs1800795) have been suggested to be more prone to age-related inflammatory pathologies, impaired innate immune responses, and low zinc availability compared with those with the C/C and C/G variants [34]. Because all Asian people are G/G allele carriers, Japanese people (including the participants in this study) might be more likely to need zinc supplementation than European people, in whom the ratio of G/G allele carriers is approximately 25% [35].
Our results suggest that older adults over 75 years of age might become susceptible to zinc insufficiency with increasing age, even if they are normally nourished. Preservation of serum zinc levels may be an effective means of preventing a decline in serum albumin levels. Therefore, increased zinc intake from zinc-fortified foods and supplements might be important even for older adults who are normally nourished as assessed by dietary survey. Further study of the association between zinc concentrations and physical condition/independence should be pursued.

Our findings suggest that normally nourished adults over 75 years of age may become susceptible to zinc insufficiency with increasing age. Increased dietary zinc intake and zinc supplementation might be important for older people to achieve successful aging.

This work was supported in part by a research grant from Kao Research Council for the Study of Healthcare Science (TS).

The authors declare that they have no competing interests.