Pathophysiological Changes With Aging in a Novel Obese Diabetic Rat

The Spontaneously Diabetic Torii (SDT) fatty rat develops hyperglycemia and dyslipidemia from a young age, leading to diabetic complications, such as nephropathy, retinopathy, neuropathy, and non-alcoholic steatohepatitis (NASH). In this study, we investigated pathophysiological changes in female SDT fatty rats at 65 weeks. Hyperglycemia and hyperlipidemia were sequentially observed in the rats, and blood insulin, alanine aminotransferase (ALT) and aspartate aminotransferase (AST) levels were also increased. Histopathological analyses were performed in the liver, kidney, heart and eye. Pathological findings, such as focal and/or diffuse hypertrophied hepatocytes with fatty changes, and very slight inflammation and fibrosis in the liver, were observed in the rats. Glomerular and tubular lesions in the kidney and corneal lesions were also observed; however, the NASH-like lesions tended to diminish compared with those at 40 weeks. As new findings associated with age, corneal lesions such as inflammation, vascularization and fibrosis, and increased cardiac fibrosis were observed in the aging rats. The aging female SDT fatty rat may be useful in better understanding the pathophysiology and development of new therapies in chronic kidney disease (CKD), diabetic ocular lesions and diabetic cardiomyopathy. Diet manipulation is also necessary for the acceleration of characteristic diseases.

Diabetes mellitus and obesity are common metabolic disorders, and this population of patients is rapidly increasing worldwide [1, 2]. Among the factors related to the increasing prevalence of this disease are consumption of high calorie diets and sedentary lifestyles [3]. Furthermore, the growing population of patients with diabetes and obesity has resulted in a rapid increase in the number of patients who have diabetic complications, such as nephropathy, retinopathy, and neuropathy [4, 5]. Despite efforts to develop means to suppress or treat the incidence and progression of these diseases, the effects and results remain poor [6].
Various animal models for diabetes and obesity have been established to help better understanding the pathophysiology in metabolic diseases and to develop new therapies. The Spontaneously Diabetic Torii (SDT) fatty rat was established by introducing the fa allele of the Zucker fatty rat into the nonobese SDT rat genome [7, 8]. The SDT fatty rat develops obesity, hyperglycemia, and dyslipidemia at a young age. Furthermore, with the early incidence of diabetes, diabetes-related complications in the SDT fatty rat are seen at a younger age compared with other obese diabetic models [7, 9, 10]. However, we have not examined the long-term changes of diabetic complications, keep, deterioration, or remission. In this study, we investigated the pathophysiological changes in the aging female SDT fatty rat.

Five female SDT fatty rats at 65 weeks of age from CLEA Japan (Tokyo, Japan) colonies were used in the study. All animal procedures and the protocol complied with the guidelines for animal experimentation set by the Ethics Committee for Animal Use in CLEA Japan. The rats were maintained in a climate-controlled room at a temperature of 23 ± 3°C, humidity 55 ± 15%, and a 12h/12h light-dark cycle. The rats had free access to a standard diet (CE-2, diet composition; moisture 8.9%, crude protein 24.9%, crude fat 4.6%, crude fiber 4.1%, crude ash 6.6%, nitrogen free extracts 51.0%; CLEA Japan, Tokyo, Japan) and water. The rats were anesthetized with isoflurane inhalation before the blood sampling and the necropsy. On the day of the necropsy, body weights were measured, and blood samples were collected from the abdominal aorta under non-fasted conditions to determine blood chemistry parameters, such as glucose, triglyceride (TG), total cholesterol (TC), blood urea nitrogen (BUN), creatinine, alanine aminotransferase (ALT), aspartate aminotransferase (AST), and insulin levels. Serum glucose, TG, TC, BUN, creatinine, ALT, and AST were measured using commercial kits (Roche Diagnostics, Basel, Switzerland) in an automatic analyzer (Hitachi, Tokyo, Japan). Serum insulin was measured using a commercial ELISA kit (Morinaga Institute of Biological Science, Yokohama, Japan). The liver, kidneys, heart and eyes were fixed in 10% neutral-buffered formalin. After resection, tissues were paraffin-embedded and subsequently thin-sectioned (3-5 µm) as previously reported [9, 10]. The sections were stained with hematoxylin and eosin (HE) for histological analyses. The liver, kidney and heart were stained with Sirius-Red to evaluate fibrosis.

Pathological findings, such as focal and/or diffuse hypertrophied hepatocytes with fatty changes, and very slight inflammation and fibrosis in the liver, were observed. Recently, the female SDT fatty rat reportedly showed non-alcoholic steatohepatitis (NASH)-like lesions from 32 to 40 weeks of age [11]. Surprisingly, in this study, the histopathological features of NASH-like lesions in aging female SDT fatty rats were ameliorated compared with those at 40 weeks of age. An intense approach to life-style changes can reportedly induce a desired weight loss of 7-10%, associated with reduced liver fat, NASH remission, and also a reduction in fibrosis [12]. It is necessary to investigate the mechanism of remission in NASH-like lesions in the SDT fatty rat in further studies
In the kidney, histopathological findings such as glomerular hypertrophy, glomerularsclerosis, mesangiolysis, tubular degeneration that includes Armani-Ebstein changes, tubular dilation, and urinary casts were observed in the aging rats. These renal findings were enhanced in aging rats compared with findings previously reported at 40 weeks of age in female SDT fatty rats [9]. Furthermore, tubular interstitial lesions, including fibrosis and inflammatory cell filtration, were observed at 65 weeks of age (Figure 1). 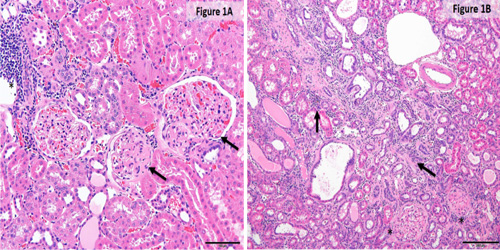 Histological photograph in the rat No. 2 is shown as a typical example. The rat No. 2 showed the most intensive changes in biological parameters (Table 1) as above mentioned. Tubular interstitial lesions are common pathological changes in chronic kidney disease (CKD), and renal changes are important findings when considering the pathogenesis of CKD progression.
In the heart, a slight increase in myocardial degeneration and fibrosis was observed (Figure 2). For the Sirius-red stains, an apparent increase in cardiac fibrosis was detected in the aging rats (Figure 2B). These findings were considered to indicate the potential for diabetic cardiomyopathy associated with hypertension in SDT fatty rats. 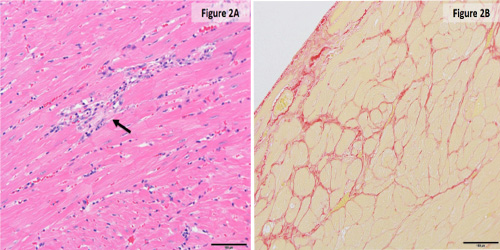 Figure 2: Histological analyses of the heart in female SDT fatty rats at 65 weeks of age (the rat No. 2). Myocardial degeneration (A) and fibrosis (B). HE staining (A). Sirius-Red staining (B). Bar = 100 µm.

In the eye, severe cataracts were observed in all animals, while cataract-related changes were only observed in female SDT fatty rats at 40 weeks of age [9]. Histopathological findings in the retina were not observed in the aging rats. However, retinal lesions, such as folding and thickening, were reportedly observed in male SDT fatty rats at 50 weeks of age [7]. The difference in retinal lesions was considered to be associated with the breeding environment and there is a necessity to clarify this finding during development. As new findings in the eyes that can be observed in aging SDT fatty rats, corneal lesions such as inflammation, and vascularization and fibrosis were detected along with cystic lesions in the corneal surface (Figure 3). Diabetic keratopathy is one of the ocular complications secondary to type 2 diabetes and is a finding that includes slow healing or loose adhesion of the corneal epithelium after wounding [13]. Diabetic keratopathy is reportedly observed in 50% or more of diabetic patients and sometimes induces vision-threatening corneal complications, including persistent epithelial defects [14, 15]. In normal SD rats, pathological changes observed in the pancreas, kidney, and eye have not been observed. 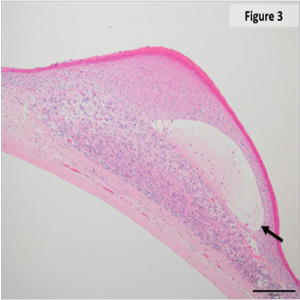 Figure 3: Histological analyses of the eye in female SDT fatty rats at 65 weeks of age (the rat No. 2). Corneal lesions, such as inflammation, vascularization, and fibrosis, associated with cystic lesions. HE staining. Bar = 200 µm

The obese type 2 diabetic rat models also represent various diabetic complications [7]. Renal lesions in tubuli and glomeruli are observed in Otsuka Long-Evans Tokushima fatty (OLETF), Wistar fatty, and Zucker diabetic fatty (ZDF) rats. Nodular lesions in glomeruli are notable changes in OLETF and SDT fatty rats. Ocular lesions, such as cataract and retinal capillary lesion, are observed in OLETF and ZDF rats. Among retinal changes, folding and thickening are interesting findings in SDT fatty rats. Moreover, other diabetic complication, osteoporosis and sexual dysfunction, are observed in OLETF and ZDF rats as well as SDT fatty rat.
In this study, we investigated the pathophysiological changes using three rats at 65 weeks of age. It is difficult to keep the SDT fatty rats for a long term because of development of diabetes-related diseases. In further study, more animals are prepared, and the reproducibility of this study and the periodical changes should be confirmed. Pathophysiological analysis in the aging male SDT fatty rat is also essential to elucidate the characters of this model.