1Department of Nutrition and Food Science, School of Biological Sciences, College of Basic and Applied Sciences University of Ghana

Body weight can be defined as the sum of bone, muscle, organs, body fluids and adipose tissue. Some or all of these components are subject to normal change as a reflection of growth, reproductive status, variation in exercise levels and effects of aging. The study sought to assess the strength of correlation between body weight and body fat composition in adults from the ages 30 to 60 years.

It is cross-sectional study of adults between 30 to 60 years. The study was conducted in a densely populated suburb of Accra the capital city of Ghana. WHO Step-wise questionnaires were used to gather all data. Weight was determined using standard weighing scale ensuring that subjects were in minimal clothing. Height measurement was taken using microtoise. The skinfold thickness were measured using skinfold caliper. The statistical package SPSS “11” and Microsoft Excel software were used for the analyses. Frequencies and percentages was computed for categorical variables whilst means and standard deviation for continuous variables. Pearson Correlational analysis was used to assess the relationship between body weight and total body fat.

It could be concluded from our findings that body weight is positively correlated with percentage body fat. Physical activity and conscious effort to maintain an ideal body weight through dietary approaches is therefore encouraged to reduce the high onset of non-communicable diseases that plagues the vulnerable population.

Body composition is the amount of fat versus lean muscle tissue in the human body expressed as a percentage of a person’s total weight. Body weight alone is not a clear indicator of good health because it does not distinguish how much comes from fat and lean body mass. Thus body composition can be referred as the relative sizes of the four basic body compartments that make up the total body: lean body mass, fat, water and bone [1]. The division of body composition into the fourcompartment model is based on metabolic activity, energy demand and comparative size [2]. The body weight can be defined as the sum of bone, muscle, organs, body fluids and adipose tissue. Some or all of these components are subject to normal change as a reflection of growth, reproductive status, variation in exercise levels and effects of aging. It has been argued that water, which makes up 60% to 65% of the body weight is the most variable component [3], because ones state of hydration can induce fluctuations of several pounds. Muscle and skeletal mass adjust to some extent to support the changing burden of adipose tissue. However, true weight loss and excessive weight gain are associated primarily with a change in the size of the fat depots [4]. Both cross-sectional and longitudinal studies have shown that with advancing age people tend to become more obese -their amount of visceral fat tends to increase and their skeletal muscle mass declines [5]. There seems to be some correlation between one body weight and body fat composition.

This was a cross-sectional study and constituted 108 males (54%) and 92 females (46%) adults between 30 to 60 years. WHO Step-wise questionnaires [6] were used to gather all data. This took into account the background of respondents which included occupation, ethnicity and income level. The lifestyle variables also included physical activities with corresponding duration for a particular activity. The subjects composed of males and females without any observable medical or surgical disorders in a suburb of Greater Accra Region in Ghana. Parameters indicating body weight and body fat composition and their correlation were determined. Hence, the main thrust of this research was to find out the strength of correlation between body weight and body fat composition in adults from the ages 30 to 60 years. The study was conducted in a densely populated suburb of Accra the capital city of Ghana.

Weight was determined using standard weighing scale ensuring that subjects were in minimal clothing. The respondents were prompted to stand upright with their heads in an erect position and the barefoot on the foot pads of the scale. Readings were recorded to the nearest 1kg. Height measurement was taken using microtoise where the subject stood upright with their arms at their sides, feet together and with the maximum occipital prominence of the head, their shoulders, calves, heels and the buttocks touching the vertical wall. The head was steadied such that the Frankfort plane (the lower border of the orbit of the eye aligned horizontally with the external auditory meatus of the ear) was perpendicular to the vertical wall. The measurement was then taken from the crown of the head to the heel of the feet. Measurements were recorded to the nearest 0.1cm. Measurements of body weights and heights of respondents were used in calculating the BMI= kg / m2.

The skinfold thickness were measured using skinfold caliper. The skin fold measurements were taken at four sites; triceps, biceps, sub scapular and suprailiac.The respondent’s left arm was in a relaxed position. The skin and subcutaneous tissue was grasped 1cm above the arm's midpoint between the tip of the acromion process of the scapula and the olecranon process of the ulna with the thumb and forefinger. The fold runs parallel to the long axis of the arm, and the measurements taken at the posterior midline within three seconds when the reader was stable. The procedure was similar to that of triceps above, but in this case the skin fold was lifted from the anterior aspect of the upper arm, directly above the center of the cubital fossa at the same level as triceps skinfold and mid-arm circumference. This skinfold has the advantage of being a uniform layer of subcutaneous fat and does not require precise localization. With the shoulder and arm relaxed, the skin was grasped 1cm under the inferior angle of the scapula with the thumb and forefinger. The measurement was then taken. The fold runs parallel to the natural cleavage lines of the skin, a line about 45° from the horizontal extending medially upwards [7].

The skinfold was supported with the thumb and forefinger during the measurement. Readings were recorded to the nearest 0.2mm. The sum of the skinfold measurement was compared to standard tables to estimate the percentage body fat Table 1 [8].

Table 1: Percentages of fat corresponding to the total value of skinfolds at four sites (biceps, triceps, subscapular and supra-iliac) [8, 9].

The statistical package SPSS “11” a and Excel computer software were used for the analyses. In the analysis of the body fat percentage, (Table 1) was the standard used. In the description of body weight per relative height, body mass index (BMI), Table 2 was use according to WHO classification. This is followed by the desire or recommended BMI per age (Table 3) was used to describe according to age distribution. To calculate the energy expenditure per person the following equations were used for men and women. Equations for energy expenditure calculation: Energy expenditure = Basal Metabolic Rate (BMR) x activity factor. Adopted from Owusu et al (2004) [8] 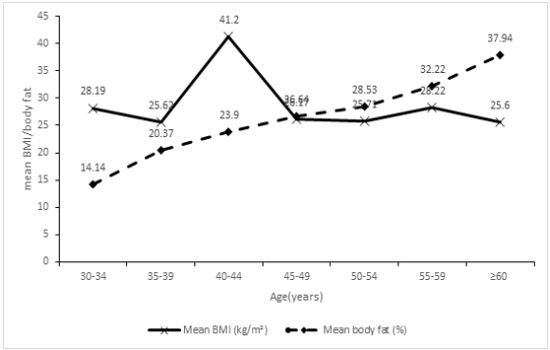 Figure 1: Effects of Age against BMI and % body fat. 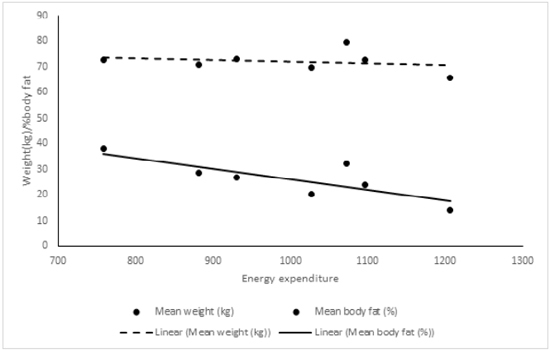 Percentage body fat contributes greatly to weight gain and weight loss and this consequently affects the overall health and general wellbeing of an individual. When % body fat is too high, it can lead to an increased risk of getting a cardiovascular disease, metabolic syndrome, cancer and other noncommunicable diseases. If it is too low it can also result in ill reproductive health among others [3]. The findings of the study revealed that, even though males recorded a higher mean body weight of 72.43 kg compared to females who recorded 68.12kg, the females had a higher mean body fat of 28.35% compared to that of 17.81% in their male counterparts (Table 4). This shows that the females had exceeded the ideal % body fat for their gender while the males were within the acceptable range. The gender disparities in % body fat is not surprising as males tend to have a larger portion of their body composition being muscle and bone mass as compared to females whose biological make predisposes them to have a higher percentage body fat [5, 8]. 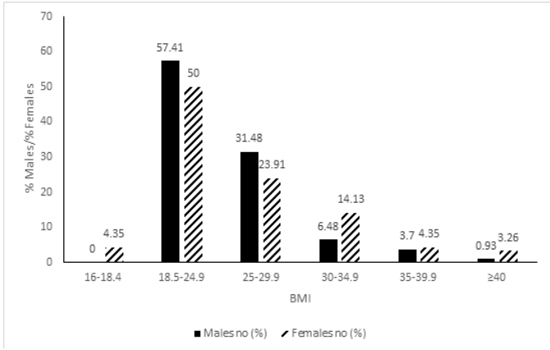 Figure 3: Effect of BMI on % number of males and females.

Again, it was observed that the kind of occupation engaged in by the participants affected their % body fat (Table 5). Drivers recorded the highest % body fat of 36.3% followed by Nurses who had 29.5% then public servants also followed with 27.13% while policemen had the least percentage body fat of 11.5%. This observation is consistent with literature as more physically engaging professions requires more physical activity and higher energy expenditure which is proven to lessen body fat as they are broken down for energy [3].

The effect of age on % body fat and BMI was also examined. The results showed that % body fat increased with increasing age. The BMI however fluctuated but climaxed in those individuals between the ages of 40-44 years at 41.2kg/m2 and then decreased from age 45 years to 25.6% by age 60 and above. Studies have shown that people tend to be more obese and have a higher % body fat with advancing age [5, 8]. The constant increase in % body fat across the youngest to the older participants is thus in line with literature findings. Also the components of body composition are known to be subject to normal change as a reflection of growth, reproductive status, and variation in exercise levels as well as effects of aging. This was further confirmed in figure 2 where increasing energy expenditure in terms of increased level of physical activity reduced both % body fat and mean body weight.

Finally, there was a positive correlation between overall body weight and % body fat (r = 0.217, p = 0.001). Gender was seen to be strongly and positively correlated with % body fat (r = 0.671, p = <0.001). Nature of Occupation and BMI were however not found to be correlated to % body fat in this study (Table 6). The correlation between body weight and % body fat has been established. True weight loss or excessive weight gain are primarily associated with a change in the size of fat deposits [4]. Clearly, % body fat has implications on health and general wellbeing of individuals as it is known to be associated with the risk of chronic non-communicable diseases and ill reproductive health amongst others.

It could be concluded from our findings that body weight is positively correlated with percentage body fat. The strength of association is seen more with the female sex and also with increasing age. A more active occupation reflected a lesser percentage body fat and vice versa. Physical activity and conscious effort to maintain an ideal body weight through dietary approaches is therefore encouraged to reduce the high onset of non-communicable diseases that plagues the vulnerable population.