Image understanding in knowledge-rich domains is particularly challenging, because experts’ domain knowledge and perceptual expertise are demanded to transform image pixels into meaningful contents [1-3]. This motivates using active learning methods to incorporate experts’ specialized capability into this process in order to improve the segmentation performance [4-6)]. However, traditional knowledge acquisition used by active learning methods, such as manual markings, annotations and verbal reports, poses series of significant problems [7, 2]. Because tacit (implicit) knowledge as an integral part of expertise is not consciously accessible to experts, it is difficult for them to identify exactly the diagnostic reasoning processes involved in decision-making, On the other hand, empirical studies suggest that eye movements, as both direct input and measurable output of real time signal processing in the brain, provide us an effective and reliable measure of both human cognitive processing and perceptual skill [8, 9]. Recently, studies try to incorporate perceptual skill into image understanding approaches [4, 7, 2, 6, 10]. Experts’ eye movement data are projected into image feature space to evaluate feature saliency by weighting local features close to each fixation. Salient image features are then mapped back to spatial space in order to highlight regions of interest and at- tention selection [4]. Furthermore, a conceptual framework is developed to measure image feature relevance based on corresponding patterned eye movement deployments defined by pair-wise comparison between multiple experts’ eye movement data [7, 2]. In an image retrieval study [10], images are segmented generically based on image features first. In the later step of image matching, the similarity measures between query image segments and candidate images are weighted by subjects’ fixation data. There are significant limits associated with these approaches. Some of them treat eye movements as a static process by solely using fixation locations without taking the dynamic nature into account [11]. Other studies apply dynamic models to capture sequential information of eye movements, but the cardinality is heuristic and the eye movement descriptions are limited. Since these studies directly use the observed eye movement data, which are noisy and inconsistent, to evaluate image features, their methods’ reliability and robustness are undermined. To address these limitation, we adopt Signature Patterns to represent experts’ perceptual skill [12-14]. Signature Patterns summarize a set of eye movement patterns consistently exhibited by dermatologists while examining various dermatological images in Fig. 1. Signature Patterns encode rich information of experts’ eye movements including fixation locations, fixation durations, and saccade amplitude. Recent eye tracking studies suggest that all these descriptions characterize important diagnostic reasoning processes [15, 16, 9]. Based on these eye movement descriptions, Signature Patterns shed light on both diagnostic significance of image regions and their relative spatial structures. We believe that the patterned behaviors underlying observed human behavioral data is a critical intermediate component to advance domain-specific image understanding. From this perspective, we utilize the spatialtemporal properties discovered in experts’ eye movement data to guide medical image segmentation. In particular, we propose a principled generative model to combine experts’ Signature Patterns with image properties in order to improve image segmentation by estimating diagnostic significance and varying visual spatial structures of the medical images. Perceptual Expertise Based Segmentation

Instead of directly evaluating image features with noisy unstable fixations, we formulated this problem into a probabilistic inference one: given the image features and Signature Patterns from experts, we are inferring diagnostic significance of image regions and their spatial structures [17]. Our method simultaneously grouped dense image features into spatially coherent segments via color and texture cues, and refined these partitions using Signature Patterns, as depicted in the probabilistic generative model in Figure 2.

Figure1: One dermatological image segmentation using our method which combines experts’ Signature Patterns and superpixels. From left to right, we show an original image, four experts’ eye movement sequences super-imposed onto the image (each circle center represents a fixation location and the radius is proportional to the duration time on that particular fixation, a line connecting two fixations represents a saccade), one instantiation of the Concentrating Pattern learned from multiple experts’ eye movement sequences which is characterized by a group of eye movement sequence segments with similar spatio-temporal properties [12, 13], an over-segmentation of 400 superpixels, and segmentation result generated from our model with inferred primary abnormality highlighted in red. Superpixels were adopted as the finest information scale [18, 19]. Each image was first segmented into a group of locally smoothed regions with the normalized cuts spectral clustering algorithm [18] as shown in Fig. 1. These regions contain more contextual information than at the pixel grid level. We described the texture of each superpixel using a local texton histogram by quantizing band-pass filter responses into 64 bins. A color histogram was computed by quantizing the HueSaturation-Value (HSV) color space into 60 bins. For each image n, the feature vector of m-th superpixel was represented with a variable x(i)nm. An eye movement sequence is described by a series of eye movement units, each one of which is composed of one fixation and its successive saccade. The features describe an eye movement unit are fixation location, fixation duration, and saccade amplitude. Similarly, let Mn(i) be the m-th eye movement unit. Our representation of a dermatological image n was characterized by a collection of regions with various diagnostic significance levels. Each region was composed of a number of superpixels. The goal is to infer the diagnostic significance (e.g., primary morphology) of each region both locally from the set of its internal superpixels and globally from experts’ signature eye movement patterns. Given the perceptual category [12], on which the image n belong to, we parameterized these dependencies with a significance variable s(i) that indicates the diagnostic importance of the superpixel i’s internal visual information, and a variable tn which indicate spatial structures of the Signature Pattern X(e). The joint distribution was defined as 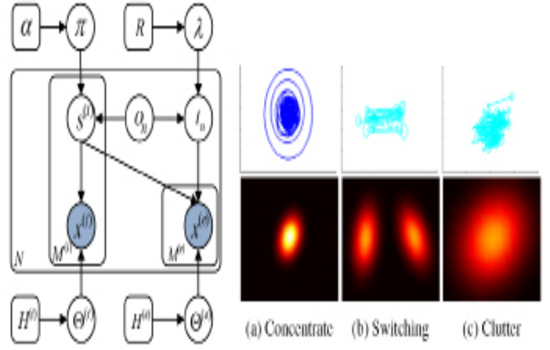 Figure 2: The proposed graphical model. Left: the generative probabilistic process is described using graphical models. See section 2 for details. Right: In the upper row, we show one centered instantiation for each type of Signature Patterns. In the lower row, we plot the Gaussian-distributed spatial structures tn learned by our model from multiple instantiations of corresponding Signature Patterns. The combinations of these three types of Signature Patterns form four perceptual categories of dermatological images [12].
Where N is the number of images, M(i)n is the number of superpixels in the n-th image, and Mn(e) is the number of eye movement units of the signature pattern. Thus X(i) = {x(i)nm} and X(e) = {x(e)nm} are the sets of all image and eye movement fea-tures. tn, s(i), and on specify spatial structures of signature patterns, the diagnostic significance level of superpixel i, and the perceptual category of the image, respectively. Note that the model has different dimensionality for different perceptual category as the dimensionality of tn,and s(i) depends on the perceptual category on. We defined K distinct diagnostic significance levels which give rise to superpixels with different typical features X(i) = {Xnm(i)} The particular significance level s(i) with each superpixel ar independently sampled from a category-specific multinomial distribution:

p(θ(e)|λ , on) = N(θ(e)|ςon, γon) -------------->(5) Where λ = {ς,γ}, and these transformation distribution are regularized by conjugate normal-inverse-wishart prior λ NIW(R). We then modeled the eye movement units of Signature Patterns as a Gibbs distribution:

p(x(e)nm|s(i), tn,θ(e)) ∝ exp(βf(x(i)nm, s(i),tn,θ(e)))------------->(6) Where f denotes the correlation between spatial structures of Signature Patterns and diagnostic significance. And ß is a free parameter to control the overall reliability of Signature Patterns. A Gibbs sampler was developed to learn the parameters of our model. We assumed that hyperparameter values are fixed. We also employed conjugate prior distributions for the diagnostic significance and spatial structure densities. These allowed us to learn the parameters by iteratively sampling significance s(i) using likelihoods which analytically marginalize significance probabilities πand parameters θ(e) This Rao-Blackwellized Gibbs sampler approximates the posterior distribution p(s(i)|X(i) , on) by sampling from it. This posterior can then be used to estimate the underlying parameters. Experimental Evaluation Eye tracking experiments were conducted to collect eye movement sequences from eleven board-certified dermatologists while they were examining and diagnosing a set of 70 dermatological images, each representing a different diagnosis. A SMI (SensoMotoric Instruments) eye tracking apparatus, which was running at 50 Hz sampling rate and has reported accuracy of 0.50 visual angle, was applied to display the stimuli at a resolution of 1680 by 1050 pixels. The subjects viewed the medical images binocularly at a distance of about 60 cm. They were instructed to examine the medical images and make a diagnosis. The experiment started with a 9-point calibration and the calibration was validated after every 10 images. Based on the inferred Signature Patterns, we ran our model to do segmentation. We compared our results to the normalized cuts spectral clustering method (NCuts), and a Guassian mixture model (GMM) based on the same set of color and texture features as used in our model. Our model consistently detected variability in the lesion spatial distributions, and capture both primary and secondary abnormalities. In contrast, NCuts tends to generate regions of equal size, which produces distortions. If the lesion scales are comparable with the body parts’ in the images, NCuts is relatively effective (4th row and 6th row, 5th column in Fig. 3). Otherwise, it tends to fail. Without incorporating domain-specific expertise, GMM discards the dependencies among the superpixels at diagnostic level. So it fails to either differentiate the regions with similar appearance (3rd row and 6th column in Fig. 3). 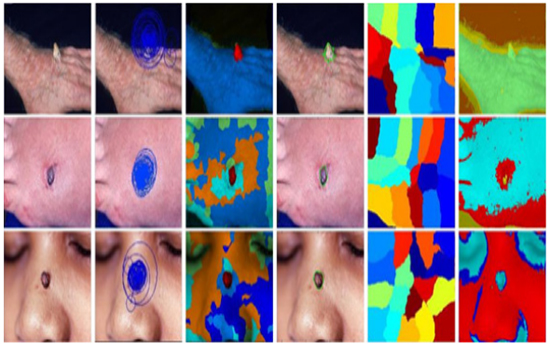 Figure 3: (a) Singular lesion segmentation based on Concentrating Pattern. 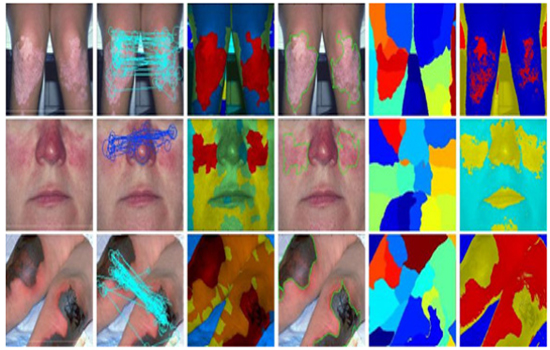 Figure 3: (b) Symmetric lesion segmentation based on Switching Pattern. 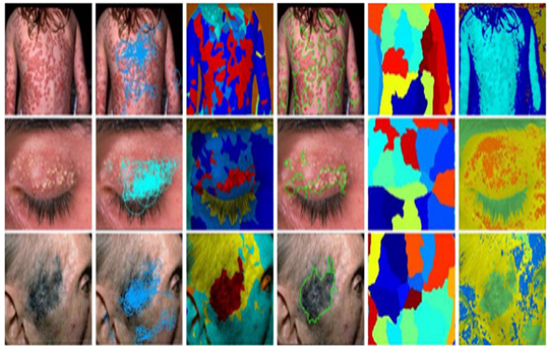 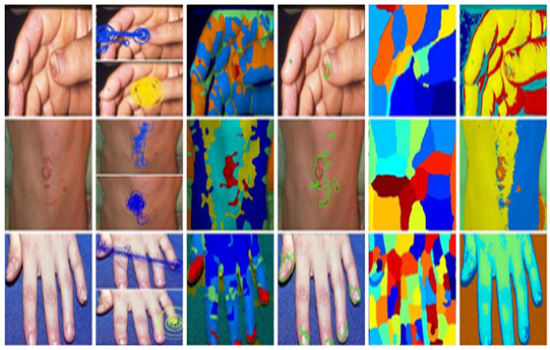 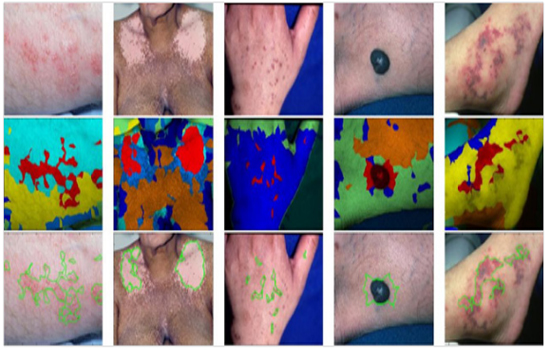 Figure 4: Qualitative test results for our perceptual expertise based segmentation. An even sampling from least to highest pixel error are shown from left to right. Original images are shown in the top row, the detected region labels in the middle row, and estimated primary abnormalities in the bottom row. The diagnostic significance estimates suffer if some abnormalities of high-density lesions are peripheral in terms of Signature Patterns’ spatial distributions.

To quantitatively evaluate results, we measured overlap with dermatologists’ segments via the Rand index in Fig. 5. Although GMM performs well for some images with unambiguous features, our method was often substantially better. Signature Patterns enabled us to improve segmentation performance without learning images layers. The perceptual skill encoded in Signature Patterns helped to capture global spatial structures of lesions among dermatological images. Note that superpixels being fixated on were not necessarily to be diagnostically significant, and those without fixations on them may be equivalently important as parts of primary abnormalities. Our model captured this subtlety by inferring the correlations between Signature Patterns and superpixel properties as well as taking Signature Patterns’ spatial transformation across different images into consideration. 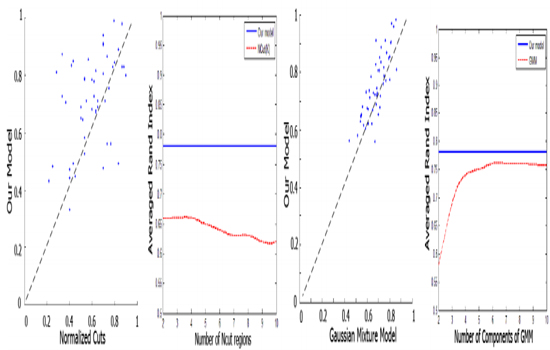