Steatocystoma Multiplex: A Case Report of a Rare Disease Diagnosed in a Trauma Patient

4Medical Student, American University of the Caribbean School of Medicine.

Steatocystoma Multiplex is a rare but benign disease that commonly presents in the head and neck region and has even presented in the oral cavity. Currently, there is limited reference of this condition in oral and maxillofacial surgery literature. The purpose of this article is to report on a rare epithelial disease that occurred in one of our patients and to review other similar diseases.

A 35-year-old male presented to the Nassau University Medical Center on two separate occasions as a level II and level I trauma, respectively. The patient was referred to our oral and maxillofacial surgery department for the management of his facial trauma and consultation about his associated facial lesions. This case report describes the sequence of treatment, methodologies in our work-up, and diagnoses of our biopsies. This report did not require approval from our institutional review board ("IRB") and the figures do not illustrate any patient identifying information.

The patient was diagnosed with Steatocystoma Multiplex after two biopsies, review of familial history of lesions, and dermatology consultation. This diagnosis was confirmed by histopathology that correlated with clinical presentation.

Steatocystoma Multiplex is often disfiguring and can lead to psychosocial behavioral issues in patients with said condition. It is important for specialists of the head and neck to be familiar with Steatocystoma Multiplex because these practitioners may be called upon to evaluate, diagnose, and treat a patient with this condition

Steatocystoma Multiplex is a rare, benign skin disorder that can manifest itself in the head and neck region and can be significantly disfiguring. There is minimal reference of this condition in oral and maxillofacial surgery literature. Steatocystoma Multiplex is characterized by multiple lesions of the skin in more than one location. The distribution of steatocystomas typically include the regions of the body that contain sebaceous follicles, most notably the face, anterior chest wall, and limbs [1, 2].However, steatocystomas can occur anywhere and have been reported on the oral mucosa and in the subdermal tissue [1, 2]. The prevalence of these lesions is not currently known, which is likely due to the fact that they are rarely reported. The lesions are smooth and round macroscopically, ranging in size from a few millimeters to several centimeters [3]. This case report describes the work-up and diagnosis of a 35-year-old male with Steatocystoma Multiplex who was clinically triaged by the Emergency Department at Nassau University Medical Center on two separate occasions as having other epithelial pathologies.

On January 22, 2015, a 35-year-old African American male presented to Nassau University Medical Center status post-assault with the chief complaint of pain to the right malar region. The previous medical history of this patient included well-controlled hypertension and multiple lumps throughout the body described as neurofibromas, suggestive of neurofibromatosis type I ("NF1"). Evaluation of the patient's chief complaint by examination and computed tomography revealed a moderately displaced right zygomaticomaxillary complex ("ZMC") fracture. Subsequent evaluation of the patient revealed asymptomatic, non-inflamed, well-circumscribed, yellowish, raised lesions located throughout the body with increased frequencies in the head and neck (Figures 1-3). 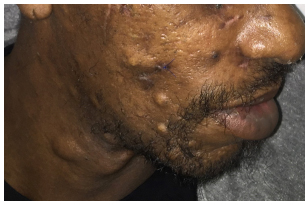 Figure 1: Illustration of multiple well circumscribed raised lesions of the head and neck. 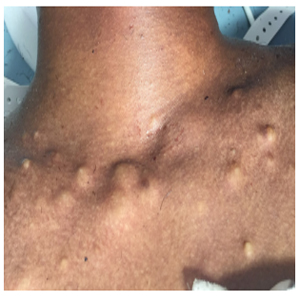 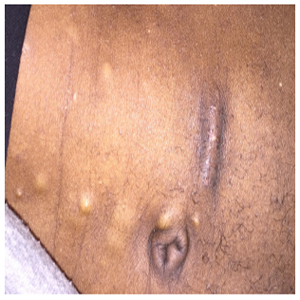 The overlying epithelium was normal in appearance, with the largest lesion approximately 2 centimeters in diameter. The patient stated these lesions initiated around the time of puberty and that he believed they were related to his acne. In addition, he stated his mother had similar lesions on her cheeks, but they were significantly smaller and fewer in frequency. Routine laboratory tests and chest imaging were within normal limits (Figure 4). The patient elected to undergo an open reduction and internal fixation of his right ZMC fracture. A biopsy of a lesion was performed through the existing incision in the right lateral brow region and submitted for histological evaluation. The histologic diagnosis of the lesion was reported as a steatocystoma, but unfortunately not conveyed to the patient as he failed to follow-up. 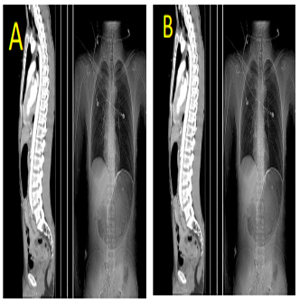 Figure 4(A and B): Figure A illustrating a computed tomography of the thorax. Figure B is a standard AP chest x-ray. Both images illustrating the patients spine is well aligned and no other obvious pathology could be determined, thus eliminating NF1.

On January 13, 2016, the same patient presented to Nassau University Medical Center as a level I trauma after an assault to the head and face with a cinder block. The patient had a Glasgow Coma Scale of 7 upon arrival and was intubated to prevent airway embarrassment. After computed tomography of the head and maxillofacial region, our oral and maxillofacial surgery service was consulted for evaluation and treatment. Injuries sustained during the assault were as follows: right temporoparietel skull fracture, frontal sinus fracture (both anterior and posterior table), grossly comminuted right zygomatic arch, left lateral orbital wall fracture, naso-orbitoethmoidal fractures bilaterally, right orbital roof fracture, Lefort I/II type fracture, bilateral nasal bone fractures, and right coronoid fracture of the mandible (Figure 5).

Additionally, the radiology service reported innumerable lipomas located throughout the head, neck, and abdomen, suggesting it may be secondary to a condition such as familial lipomatosis (Figure 6). 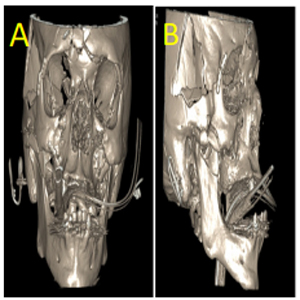 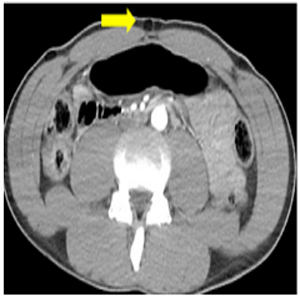 Figure 6: CT showing what the radiology team determined to be multiple lipomas on our patient.

The patient was taken immediately to the operating room by the neurosurgery department for a right hemicraniotomy, application of an external ventricular drain, and repair of a hemorrhaging scalp laceration. Once hemodynamically stable, the patient returned to the operating room with a combined neurosurgery and oral and maxillofacial surgery team for cranialization of the frontal sinus with fat and tensor fascia lata graft, and repair of the fractured facial bones (Figure 7). At this time, another biopsy was performed of one of the epidermal lesions. The pathology report diagnosed this lesion as a steatocystoma. Dermatology was consulted and confirmed the diagnosis of Steatocystoma Multiplex. 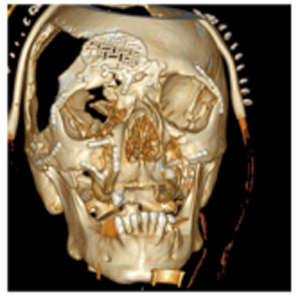 Steatocystomas are rare, benign, cystic lesions of the pilosebaceous glands. When the lesions occur in isolation they are referred to as Steatocystoma Simplex. Steatocystoma Multiplex is characterized by multiple lesions of the skin in more than one location. The distribution of steatocystomas typically includes the regions of the body that contain sebaceous follicles, most notably the face, anterior chest wall, and limbs [1, 2]. However, they can occur anywhere and have been reported on the oral mucosa and in the subdermal tissue [1, 2]. The prevalence of these lesions is not currently known, which is likely due to the fact that they are rarely reported. The lesions are smooth and round macroscopically, ranging in size from a few millimeters to several centimeters in diameter [3].

Histologically, steatocystomas are defined as dermoid cysts containing sebum or sebum-like material and keratin debris, lobules of sebaceous glands, and lacking a granular layer [1, 4, 5]. Our histologic specimen is consistent with thin, cyst-walled sebaceous glands lacking a granular layer (Figure 8). This feature is important to distinguish steatocystomas from Eruptive Vellus Hair Cysts ("EVHC"), a condition that has a similar macroscopic appearance, age of onset, and distribution pattern [4, 5]. EVHC consists of cysts that are formed by several layers of squamous cells, with vellus hairs being present in the cavity in addition to keratinous material [1, 4, 5]. 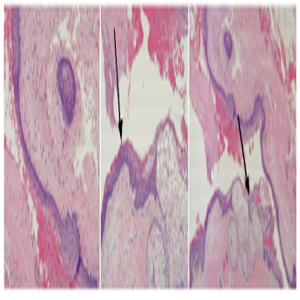 Figure 8: Steatocystoma: central space is the cyst cavity, epithelium forms the cyst lining and part of cyst wall (first image). The epithelial wall is thin and the luminal surfaces wavy (middle image). Lobules of sebaceous glands and cells are set within the cyst wall (Last image).

Steatocystoma Multiplex is a genetic condition following an autosomal dominant pattern of inheritance [1, 6]. However, the majority of reported cases are thought to be due to new spontaneous mutations as family history is often lacking [1, 6]. In our case, the patient's mother and grandfather reported having multiple lesions. The onset of cysts most commonly occurs in late adolescence to early adulthood, but has been reported as early as the neonatal period up until the sixth decade [1, 6, 7]. Its prevalence and sequelae are equal in both sexes and all races [7].

Steatocystoma Multiplex primarily occurs due to an R94C mutation in the 1A domain of the Keratin 17 gene ("KRT17"), responsible for keratin 17 [8, 9, 10]. Keratin 17 is a protein that is primarily found in the nail beds, hair follicles, and sebaceous glands. Mutations in this gene are also found in Panchyonychia Congenita Type 2, also referred to as Jackson Lawler Disease, a condition represented by eruptive cysts, natal teeth, and hair and nail abnormalities [6, 8]. Steatocystoma Multiplex can be distinguished from Panchyonychia Congenita Type 2 by the lack of comorbidities seen in Steatocystoma Multiplex [8]. However, there is often overlap between these two diseases and they are considered by some to be on the same spectrum [1, 5, 8]. Steatocystoma Multiplex has variable severity due to its dependence on multiple factors rather than purely genetic influence [1, 5, 8]. Androgen stimulation and other environmental factors play a large role in severity for individuals who are susceptible to developing these cysts [7, 10, 11].

Differential diagnoses of Steatocystoma Multiplex often includes EVHC, epidermal inclusion cysts, milia, trichilemmal cysts, and tumors of the follicular infundibulum [1, 6, 7]. Prior to biopsy, this patient was incorrectly diagnosed twice with diseases not commonly associated with Steatocystoma Multiplex. Initially, our patient was diagnosed as having NF1 due to the clinical appearance of his lesions, but he lacked other clinical features commonly found in NF1 (Table 1) and his lesions were not consistent histologically [6, 7, 11, 12]. The other diagnosis of our patient was that of familial lipomatosis, which presents as multiple, discrete, encapsulated lipomas found on the trunk, extremities, and occasionally in the neck and shoulders [3]. This diagnosis can be ruled out histologically as no adipose tissue was found in the specimen.

Steatocystoma Multiplex is benign and does not have any deleterious effects reported aside from the displeasing aesthetic appearance reported by patients. The lesions can spontaneously erupt and drain, leading to scar formation [1, 10, 13]. The worst complication is increased infection risk as there are reports that the cysts become inflamed and suppurate. This was of specific concern in regards to our patient, because these lesions were unavoidably in direct contact with the surgical field, including direct access to intracranial contents. During dissection for surgical access, numerous cysts were lanced and their contents disseminated into the surgical field, compromising sterility. Fortunately, we did not encounter any post-operative infections with either case.

The final concern is due to the rarity of Steatocystoma Multiplex. Physicians may not be aware of the condition leading to omission in their differential diagnosis [14]. This may result in an expensive and more invasive work-up than would otherwise be required.

There are several surgical and non-surgical treatment options available for patients with Steatocystoma Multiplex. Surgical excision for correction produces the most consistent result. However, permanent scarring can be an undesired outcome [14-16]. Several new treatment modalities that are being used include topical retinoids, oral isotretinoin, intraluminal steroid injections, YAG laser therapy, CO2 laser therapy, and cryoablation [4, 13, 14, 16].

Steatocystoma Multiplex was an incidental but relevant finding in this maxillofacial trauma patient. Due to his prolonged hospital course and recovery period, our team had adequate time to properly diagnose his underlying condition. When accessing facial fractures, care must be taken to avoid these lesions to minimize the risk of wound contamination. Steatocystoma Multiplex is often disfiguring and can lead to psychosocial behavioral issues. Familiarity with Steatocystoma Multiplex is important because its clinical presentation is similar to that of soft tissue tumor syndromes that may be seen by specialist who evaluate lesions of the head and neck.