Paraplegia Caused by Systemic Myopericytomas in an AIDS Patient: A Rare Case

# Chai ZH and Tao R contributed equally to this work.

Background: Myopericytoma is a rare type of perivascular neoplasm that arises from the skin and peripheral soft tissues. Cases associated with AIDS are even rarer.

Conclusion: The myopericytomas in spinal canal was relatively rare. The case we report is the most multifocal tumor to date. Surgery maybe the only treatment and it was reported that EBV may be related to the occurrence of myopericytomas.

Myopericytoma is a slow-growing benign perivascular neoplasms located in subcutaneous tissues and the etiology is unknown [1]. It was first reported by Granter et al. in 1998. And since then WHO has classified it as a soft tissue tumor [2]. It has been reported that typical myopericytomas are found in the skin and superficial soft tissues, it often located in the distal or proximal limb, such as the subcutaneous tissues at the tip of the finger, and occasionally in the trunk, head, neck, etc. A few cases are in the oral cavity, nasal cavity and larynx. The myopericytomas in the brain, heart, lung, gastrointestinal tract and other internal organs are rarely reported [3,4]. Tumor cells typically bulging into the lumen of a vessel. It often presents in a pattern as isolated and painless. The growth of myopericytoma is usually well-circumscribed, but there have been reports described that it may extend along blood vessels outside of the lesion [5]. Myopericytoma involving the nervous system is very rare. Intracranial myopericytoma has been firstly reported by Rousseau et al. [6]. We report a case of a multifocal myopericytoma involving the spinal canal in an AIDS patient.

A 31-year-old male was admitted to the first affiliated hospital of medical college of Zhejiang University in July, 2018 due to "Diagnosed AIDS for more than 3 years and gradually developed weakness in both lower limbs for 3 months". The patient presented with the loss of superficial sensation and proprioceptive sensation below the processus xiphoideus. The sensation between the T3 and processus xiphoideus was abnormal. Upon physical examination, Paraplegia and hypoesthesia below the level of nipple, muscle strength of both upper limbs graded V, muscle strength of both lower limbs graded 0. Reflex of Babinski's sign was positive. He was diagnosed with AIDS at the local hospital 3 years ago and began to receive HAART (Tenofovir+ Lamivudine+ Efavirenz). After 2 years of antiretroviral therapy, the patient spontaneously stopped taking the drug. More than 1 month ago, the patient developed weakness in both lower limbs and was unable to walk. Multiple abnormal enhancement lesions were found in the T2, T4, T6, and the L5 and S1, which were considered as neurogenic tumors. HAART (Tenofovir+ Lamivudine+ Efavirenz) was restarted. Probably due to the poor compliance, he remained immunodeficient with a CD4+ count of 166/μL, CD4+/CD8+: 0.15. Whole body tomography showed multifocal increase of FDG metabolism (Figure 1). In addition, the Magnetic Resonance Imaging (MRI) revealed multiple nodular abnormal signal shadows were observed in the spinal canal at T2/3, T4, T6 and T10 levels, with low signal on T1-weighted axial images and slightly high signal on T2-weighted axial images, and obvious enhancement was observed in the lesions on enhanced scan, the larger one was located at T2/3 level, with a size of about 2.6 x 1.0cm, and the compression and spinal stenosis in the corresponding levels of spinal cord were observed, especially at T2/3 level (Figure 2A,B,C). There was a columnar space occupying lesion in the extramedullary dura of the spinal canal at the level of L5-S1, with a clear boundary and a size of about 6.3 x 2.2 x 1.8cm. T1-weighted axial images showed equal signal, and T2-weighted axial images showed slightly higher signal, with obvious enhancement but there were some unenhanced areas in the center, and the spinal cord compressed without enhancement. (Figure 2 D,E,F). The examination of Epstein-Barr virus (EBV) DNA showed 6.29×104 copies/ml. 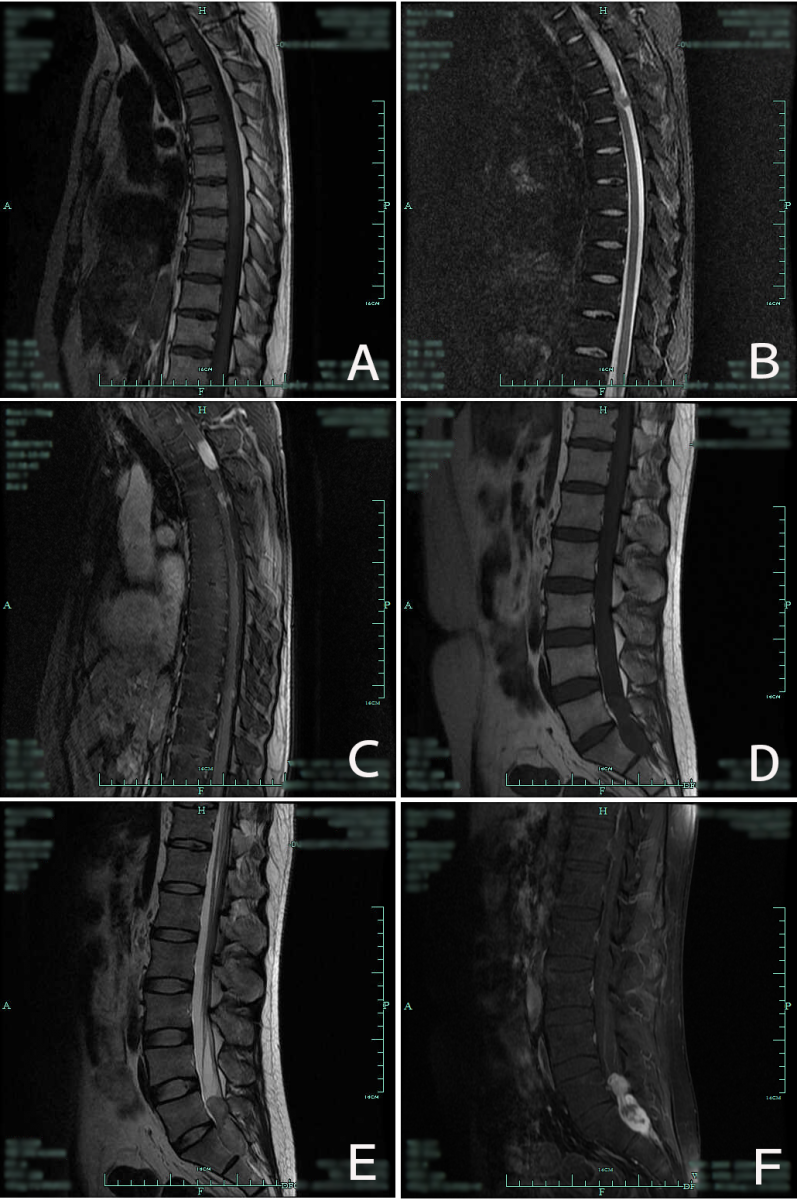 After admission to the hospital, he received treatment for AIDS and corresponding infection then received a biopsy of an inguinal lymph node, the pathological result showed myopericytoma. The patient was offered surgery for diagnosis and due to the inconvenience caused by paraplegia. A complete resection of the entities in spinal canal was performed. Histologically, the lesion was composed of spindle shaped cells that forms bundles orientated in a variety of directions, with a slightly ‘whorling’ pattern and a concentric arrangement of cells around plenty of variably-sized blood vessels. Nuclear atypia and mitotic figures were rarely found. It showed immunoreactivity for SMA, EBER, caldesmon and had a ki-67 index of about 10%. The staining of desmin, S-100 protein, CD34, CK-pan, CD117, DOG-1, human melanoma black (HMB)-45, CD31, epithelial membrane antigen (EMA) and human herpes virus (HHV8) were all negative (Figure 3). Infectious pathogens in the tumor tissue were detected by high-throughput genetic testing assay. The result showed 990 sequences, suggesting that this is human herpes virus type 4 (Epstein-Barr virus) of the lymphocryptovirus, while no bacterial, fungal, parasitic, chlamydia/mycoplasma, mycobacterium tuberculosis gene sequences were detected. 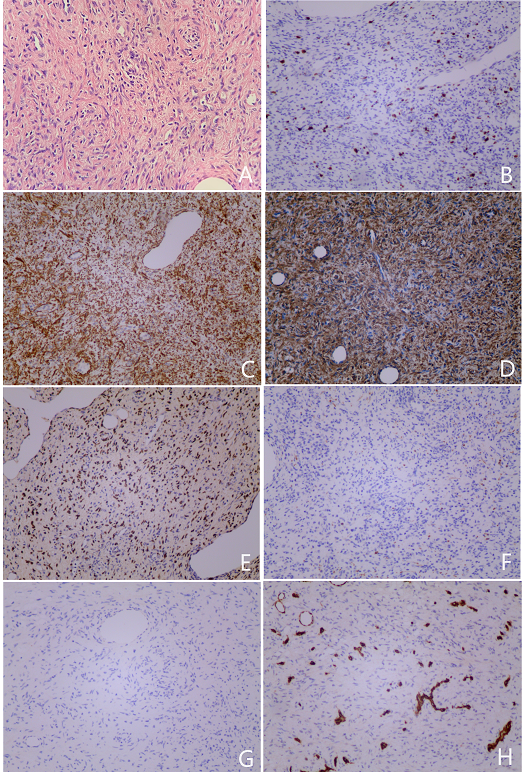 The patient's condition was not significantly relieved after the operation and discharged one month later. There is no evidence of recurrence 9 months after the surgery, the patient demonstrated that the sensory disturbance was relieved, the sensation between the xiphoid process to the umbilicus returned to normal, but the sensation below the umbilicus was still absent.

The morphological and immunohistochemical characteristics of myopericytoma were firstly described in 1998. Patients with myopericytoma are more common in middle-aged men [1,5]. In terms of gender difference, the ratio of male to female is 1.25, but no further research described the mechanisms with the differences in gender [3]. Myopericytoma is a benign mesenchymal tumor, rather rare located around blood vessels in soft tissues. The diameter of myopericytoma is generally less than 2cm [5]. It is thought to be consisted of myoid cells perivascular [7] and with no invasion to the surrounding tissues. It was usually unencapsulated and consisted of oval-to spindle-shaped neoplastic cells [6,7]. The cytoplasm of primitive spindle cells was scant and grew around the branched vessels, while the peripheral myoid cells were abundant in eosinophilic cytoplasm, showing a fascicular or whorled appearance in the myxoid matrix [8]. The clinical manifestations of myopericytoma are generally atypical with only 4% of patients relapsed after resection [9,10]. The clinical and imaging features are nonspecific, and are likely to be diagnosed as a more aggressive type of tumor, because the symptoms are primarily characterized by compression of adjacent structures [6].

Since myopericytoma is a kind of muscle-like cell, it is necessary to distinguish it from glomus tumor, myofibroma, hemangiopericytoma and angioleiomyoma morphologically. The morphologically distinguish of myopericytoma is not easy. The immunohistochemical staining becomes very important for the diagnosis of myopericytoma. It is showed that smooth muscle actin and calmodulin are positive, while CD34, XIII factor, desmin are usually negative [7,8]. Glomus tumor cells surround small blood vessels and are composed of small, single, cuboidal or round epithelial cells. Immunohistochemically, it is positive for SMA while it is negative for desmin and CD34 is positive in varying degrees, however, glomus tumor does not have the ‘onion-skin’-like proliferation of plump spindle-to-round cells as myopericytoma. Infantile myofibroma/myofibromatosis is a common fibroblastic/myofibroblastic proliferation in infancy and childhood, presenting spindle nodular hyperplasia, but these spirals present regional distribution, immunohistochemical showed positive for actin and vimentin, and negative for desmin and CD34 [4]. The tumor cells of hemangiopericytoma were spindle-to-oval, demonstrate intratumoral staghorn-type vasculature, without obvious concentric proliferation. They expressed CD34 and CD99 but did not express SMA and desmin. Angioleiomyoma has elongated and spindle shaped tumor cells surrounding the thick-walled vessels with irregular expansion, and the concentric circular structure is not obvious. Immunohistochemistry shows actin and desmin positive, while myopericytoma is desmin negative which can help the identification [11]. And in our report it showed immunoreactivity for SMA, EBER and caldesmon, and had a ki-67 index of about 10%. It revealed that the tumor is originated from smooth muscle, and the positive EBER further indicated that there may be some correlation with EBV. Negative desmin is an important marker for its differentiation from smooth muscle tumor. Reactivity of tumor cells for SMA, caldesmon, and the lack of CD34, CD117, DOG-1 reactivity can help to distinguish this tumor from solitary fibrous tumors and extra-gastrointestinal stromal tumor [12].

Myopericytoma is a unique, though rare, type of tumor that can occur in AIDS patients. Its’ association with EBV may increase the disease spectrum of mesenchymal tumors associated with EBV. But more research is needed to reveal the mechanisms of how EBV causes the onset of the myopericytoma. Similar to smooth muscle tumors in immunodeficient hosts, myopericytomas in AIDS patients have many similarities in clinical features, and EBV positive myopericytomas may be found in future patients with congenital immune deficiency or iatrogenic immunosuppression [13]. Given its mimicry and the potential for malignancy, myopericytoma presents a unique challenge to surgeons and may be overlooked in differential diagnosis [2]. No standard medical treatment has been proven to be effective, and complete resection of the lesion may be the only effective treatment. Resection of the tumor is considered curative, but radiation is used in some cases to reduce recurrence. Variants of rarer myopericytomas with malignant progression have been reported, and ongoing molecular studies may confirm mutations or activated signaling pathways that may provide chemotherapy options in the future. Because the case is rare, there is no evidence for the effectiveness of drugs or radiotherapy. More case reports are needed to improve diagnosis and broaden treatment strategies [14].

All authors have none to declare.

The authors acknowledge the contribution of Mr. Su Junwei & Mr. Zhou Hengjun in this study. All authors have read and approved the manuscript and each author believes it represents honest work.

Copyright: Chai ZH, et al. © 2019. This is an open-access article distributed under the terms of the Creative Commons Attribution License, which permits unrestricted use, distribution, and reproduction in any medium, provided the original author and source are credited.