Liquefying Panniculitis Associated with Scratching and Contact of Dirty Water

We present a case of 72-year-old man with liquefying panniculitis possibly in association with mild skin trauma due to scratching and contact with the contaminated water. There was no evidence of underlying pancreatic neoplasm or pancreatitis or other systemic conditions that might be involved in this case. Skin biopsy showed subcutaneous fat necrosis with neutrophil-dominant mixed inflammatory infiltrates. The skin lesions responded well to treatment with systemic corticosteroids. There was no sign of recurrence after three years of follow-up.

Liquefying panniculitis is often associated with pancreatitis or pancreatic carcinomas with poor prognosis [1-3]. It is an entity of clinical diagnosis, in which the epidermis overlying the nodules breaks down, and the lesion discharges brown liquid oil. We presented a case of patient with liquefying panniculitis involving bilateral hips that was not associated with these disorders, but possibly associated with skin scratching and contact of the contaminated water. Extensive investigations and the follow-up examination at three years did not identify any other etiological factors. This patient responded well to systemic corticosteroid therapy.

Similarly, Lord Buddha long before Hippocrates (544-3 B.C) 2600 years ago in his discourse Girimananda sutta had mentioned about 32 ailments that people could suffer, and stressed the fact that diseases are caused due to natural causes, changes in the environment, weather and human body. By the by, he revealed that there is another special cause of illness called Kamma Vipakaja Abhada, suffering according to your evil deeds in previous births. Several Dermatologic cases are given in these discourses.

A 72-year-old man, who was a farmer and previously healthy, reported a history of nodules and plaques on his hips. It started with small dark red-colored subcutaneous nodules on his right hip, progressed to join together, and formed plaques. A few days later, similar lesions appeared over his left hip. The larger lesions finally ulcerated and viscous oily liquids continuously outflowed (Figure 1. A-C). There was mild local tenderness Approximately 20 days prior to the onset of the lesions, the patient scratched of his left hip because he felt itching, and then accidentally contacted with unclear, but not cold, water. The patient was otherwise healthy. He had low fever in the afternoon before hospitalization, with the temperature being 37.8C. There were no other systemic symptoms such as fatigue, abdominal pain, or muscle and joint pain. The patient had neither injected nor taken any oral drugs, and had none of the following symptoms and signs before the onset of the disease: fever, joint pain, oral ulcer, history of trauma, and cold stimulation. 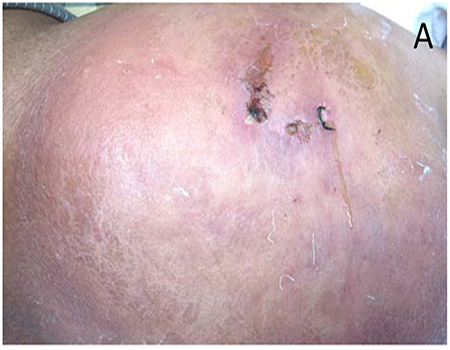 Figure1 A: A large edematous and dark erythematous subcutaneous plaque on the right hip, indurated with adhesion to skin surface and limited surface skin movement, and non-lineated margin. B: Pitting edema when pressed. C: Oily liquid discharging from the surgical wound of the skin biopsy. 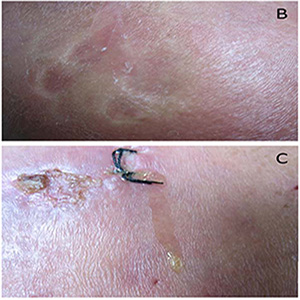 Because of a suspicion of cutaneous tuberculosis, after hospitalization the patient was treated with intravenous injection levofloxacin at 0.4 g per day plus oral rifampicin at 0.6 g per day for five days. However, there was no improvement. After the diagnosis of liquefying panniculitis was confirmed, the patient received intravenous methylprednisolone at a dose of 40 mg/d plus local dressing changes with indophor for five days. The body temperature became normal and local inflammation settled down. The treatment was continued with prednisone at a dose of 30 mg/d for two weeks. Then, the dose was reduced to 10 mg/d, which was maintained for two months before discontinuation. During a 3-year follow-up period, there was no sign of recurrence or pancreatic or other medical conditions.

Liquefying panniculitis has been often associated with pancreatic carcinomas and pancreatitis [3,4] . It is suggested that the pancreatic enzymes (e.g., trypsin) may increase microvascular permeability and escape from blood circulation to cutaneous fat tissues. These enzymes can digest fat tissues to free fatty acids. Free fatty acids were mixed with calcium from soap-like liquids, which discharge from the ulcerated lesion as oily liquid [3]. However, cases with normal serum pancreatic enzymes have also been reported. Our case showed normal blood and urine trypsin and we found no evidence of pancreatic malignancy or other tumors.  Liquefying panniculitis, sometimes, is associated with trauma, infection, cold stimulation, and other factors. Rather, in this case the skin lesions seemed to start closely after a mild cutaneous trauma (excoriation from skin scratching), followed by the contact with unclear contaminated water. These may suggest that the mild skin trauma and environmental factors in the unclear water are the potential causes of this case. However, we were not able to confirm the causalities of the skin scratching neither were we have the opportunity to identify any pathogens, chemicals or others in the unclear water because we did not have the chance to obtain the water for further analysis. We could not understand how skin scratching could cause deep fat necrosis. Interestingly, similar lesions occurred on the left side of his hips a few days later, without similar triggering factors. It is unclear whether it suggests that immune response is involved in fat liquefaction degeneration or the necrotic parts of the trypsin and lipase release into the blood, and then cause fat necrosis of the other side of his hip. The patient showed quick improvement following corticosteroid treatment. Although the pathogenesis of liquefying panniculitis is not fully understood, the well response to corticosteroids rather than antibiotics suggests that the immune regulation plays a role whereas the infection may not be involved in the case. Does that prompt the immune response may participate in the pathogenesis of the disease?  We reported a case of patient with liquefying panniculitis in which mild skin trauma and environmental factors may be involved in its pathogenesis. This case responded well to over two months corticosteroid treatments and had not recurred at the 3-year follow-up. Immunological mechanisms possibly play a role in this rare condition.