About 460 years B.C Hippocrates was born in the Isle of Cos in Greece. He taught his pupils that illness was due to natural causes, changes in the environment or weather or in the human body and dispel the belief of that illness was caused by anger of the Gods or evil spirits. The practice of charms or magic healing was changed to a science. Hippocrates is known as the father of Medical science. He taught his pupils that a patient must be carefully and thoroughly examined in order to diagnose his or her illness. Hippocrates as a teacher of medicine introduced the code of moral conduct. Even after centuries Hippocratic oath is honored by the present day doctors in all parts of the world.

Similarly, Lord Buddha long before Hippocrates (544-3 B.C) 2600 years ago in his discourse Girimananda sutta had mentioned about 32 ailments that people could suffer, and stressed the fact that diseases are caused due to natural causes, changes in the environment, weather and human body. By the by, he revealed that there is another special cause of illness called Kamma Vipakaja Abhada, suffering according to your evil deeds in previous births. Several Dermatologic cases are given in these discourses.

Buddha is believed to have treated many people, disciples and civilians who suffered from various skin diseases .A Buddhist monk Tissa Thera suffered from an unsightly skin rash consisting of multiple boils/abscesses and sores. In a day or two He was isolated by other monks because of his stinging impure body. Abscess burst and he was immersed in a pool of pus, robes soaked in pus and blood. Load Buddha heard about him went to his closet and he held one side of his bed to take him out while other monks followed .They prepared hot water, bathed him and washed his dirty robes. His wounds were cleaned was grabbed with new robe. Thissa-Thera was relieved became liberated in an instant, attained Arahanhood and passed away never to born again in Samsara [1]. (Figure 1) 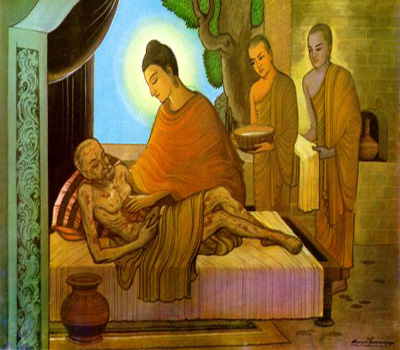 Figure1: Treating and caring a sick monk by Buddha.

THE FIRST ORIGIN OF PSYCHODERMATOLOGY

Buddhist philosophy is based on mind over the existing matter and is open to reason and critical analysis. Karma is believed to play a major role in the occurrence of some of the medical illnesses including skin diseases. Arahath Anuruddha (son of king Amithodana - a brother of Buddhas farther king Sudddhodana) after attaining Arahathhood visited his home town Kapilavatthu at the Himalayan foothills in (modern) Nepal to see his relatives. An alms giving was arranged in his home. All other relatives including parents paid homage but her younger sister Rohini was not present there. So the Arahath inquired about her. He was informed that princess was suffering from an acute skin disease with wounds all over her body; hence she is feeling shy to come to face the thera. Arahath requested her to come out and advised her to build a Resting Hall for Bikkus and offer same to Sangha. She built a two storied Resting Hall. Buddha participated at the offering ceremony alms giving. Rohini was cured instantly after the arms giving ceremony. Lord Buddha preached a sermon and she attained Sothapapatti hood. Buddha linked her condition to anger and treated her by teaching her on how to control her emotions through controlling mind in a previous birth she had born as the queen of King Brahmadattha. She was envious of a beautiful subordinale princess and applied Kasambiliya (Laportea interrupta) nuts on her bed. A rash erupted, her skin was full of wounds, suffered pain and her beauty vanished with scars all over her body. Rohinis Kamma vipakada abadha was thus explained by Buddha [2].

There lived in Rajagaha (now Rajgir in India) a patient with severe chronic skin disease named Suppabuddha. He saw a large gathering at Veluwana Vihara. He approached the crowd. He was ashamed to sit among other people because of his impure body with stinking wounds all over.So he sat in a faraway corner and listened to the Sermon. Buddha who saw him and knew his potential and preached a sermon dealing with vileness of sensual desires. Suppabuddha attained the Sothapatthi pala or realizing the fruition of stream winning. Cause for his suffering was, he had in a previous birth in samsara spit out when he saw Pachcheka Buddha Nagara Siki in anger and arrogance [3].

Buddhist text includes what may be the earliest descriptions of psychodermatology and dermatology nursing.