Introduction: Paracoccidioidomycosis is a systemic mycosis transmitted by inhalation of the conidia form of Paracoccidiodes brasiliensis fungus. The disease is presented as acute, subacute or chronic forms, according to the cellular immune response of the host, and can be developed from a primary pulmonary focus or the reactivation of an existing focus, years after exposure.
Case report: Male, age 41, carpenter, HIV positive with CD4+ lymphocyte count of 66 cells / ml, admitted at the Hospital Universitario Gaffree e Guinle (HUGG)- Brazil. He presented with fever, enlarged lymph nodes, diarrhea, and pancytopenia. Lymph node biopsy diagnosed as paracoccidioidomycosis. A Case advanced with severe thrombocytopenia, pulmonary bleeding and death, despite antifungal therapy instituted.
Discussion: Paracoccidioidomycosis in patients with AIDS manifests itself with clinical and epidemiological patterns different from non-AIDS patients, and is more common in patients with CD4+ lymphocyte cell count less than 200 cells / ml. The best course of treatment and duration of the maintenance phase are yet to be determined by further studies.

Paracoccidioidomycosis (PCM) or Lutz-Almeida-Splendore's disease is a granulomatous systemic chronic mycosis, with insidious progression, caused by the thermo-dimorphic Paracoccidiodes brasiliensis fungus. The most common form of infection occurs through inhalation of conidia present in the soil, usually in patients with epidemiological history of living in rural areas or earthmoving activity. These conidia produce the yeast form that parasite host tissues. Lungs and upper airway are the first segments to be affected, later following hematogenic or lymphatic dissemination [1].
PCM is the systemic mycosis with the highest mortality rate in Brazil. Considering the average mortality rate in the course of the disease, and the number of deaths / year attached to PCM, it is estimated an incidence of 3360 new cases / year of PCM in Brazil, around 1-3 cases per 100 000 inhabitants [1-3]. PCM can be expressed in acute, subacute and chronic forms. The acute and subacute forms, also called juvenile forms, correspond to 3 - 5% of the total incidence, more usual in children and teenagers. This clinical form has uniform distribution between genres with a slight predominance in young male adults. In this clinical presentation the main attributes are: lymphadenopathy, hepatosplenomegaly, unspecific digestive symptoms, joint involvement, and skin lesions. Anemia, fever, and weight loss, with fast deterioration of the general status, can also be found. Pulmonary involvement in juvenile forms is rare [1,4].
The unifocal-multifocal chronic adult form is more usual in males, and is responsible for over 90% of PCM cases. It is characterized by an indolent progression and a clinical condition that resembles to pulmonary tuberculosis, with weakness, weight loss, fever, sweat, coughing, and dyspnea symptoms. Reticulonodular infiltrate can be found in radiological lung exam: bat wing aspect, usually in the upper two-thirds of the lung, and distal hyper-transparency in the bases of the lung (unifocal form). When the disease expands to extra pulmonary sites, as the oral mucosa, adrenals, central nervous system, among others, it is classified as disseminated or multifocal [5].
According to these previous information, the main differential diagnosis of PCM is tuberculosis (TB), because of its clinical and radiological resemblance, so the diagnosis is based on microbiological criteria, established as isolation of fungus or mycobacteria. It is important to emphasize that the same individual can have both infections, this association occurring in 5.5 to 19% of cases, making the diagnosis even harder. Other differential diagnoses that should be considered are: sarcoidosis, histoplasmosis, idiopathic diffuse interstitial pneumonitis, chronic silicosis, coccidioidomycosis, chromoblastomycosis, cutaneous and visceral leishmaniasis, leprosy, skin, and laryngeal cancer [5].
The patient with Acquired Immunodeficiency Syndrome (AIDS) is more susceptible to the progression of acute PCM, reactivation of a chronic infection, and progression to disseminated forms, many times with unusual presentations. An Oswaldo Cruz Institute research, developed from 1996 to 2006, has shown that PCM, despite being the systemic mycosis with highest mortality rate in Brazil, has lower mortality when associated with AIDS. In this case, other causes are more prevalent: cryptococcosis, candidiasis, histoplasmosis, and aspergillosis, respectively. AIDS changes the appearance of systemic mycoses infection and may overlap other opportunistic infections, like TB. Therefore, it is possible that the PCM has to be underdiagnosed, especially when death occurs, in which autopsies are rarely performed [2].

Male, 41 years old, black, carpenter, born in Rio de Janeiro. HIV / AIDS diagnosed two years before. Presently in the irregular use of antiretroviral therapy (ARV) from diagnosis with: lamivudine (3TC) 150mg PO 2x / day, tenofovir (TDF) 300mg PO 1x / day, and efavirenz (EFV) 600mg PO 1x / day. Patient was transferred to the University Hospital Gaffree and Guinle (HUGG) with lymphadenopathy initiated five months before and abandonment of ARV. He was previously investigated for ganglionic tuberculosis and was in use of 4 four-inone tuberculosis tablets PO daily (rifampicin 150mg, isoniazid 75mg, pyrazinamide 400mg, and ethambutol 275mg - RIPE). Around seven days before admission, blood test showed CD4+ lymphocyte (LT - CD4+) count of 66 cells / ml and plasma HIV viral count of 135,519 copies / ml.
Presented in good general condition, with pallor ++/4, tachycardia (124 beats per minute), tachypnea (23 incursions per minute), hypotensive (90x50 mmHg), febrile (38.5°C), with cervical, axillary, and inguinal lymphadenopathy, without jaundice or cyanosis. He complained of fever on evenings, unquantified weight loss, and low diarrhea in the last two months. Pulmonary exam with vesicular murmur decreased in right lung base, without significant alterations in the cardiovascular or abdominal examination. He presented a pattern of diffuse alveolar infiltrates on chest radiography.
Prophylaxis began for Mycobacterium Avium Complex with clarithromycin 500mg IV 2x / day, and for toxoplasmosis and pneumocystis with trimethoprim/sulfamethoxazole (TMP/ SMX) 400 / 80mg PO 2x/day. Treatment for chronic diarrhea in immunosuppressed was initiated: metronidazole 500 mg PO 3x / day, albendazole 400 mg PO 1x / day and ciprofloxacin 400mg PO 2x / day, for five days (with TMP/SMX already installed). The use of RIPE was suspended due to drug-induced hepatitis.
Admission exams were requested with blood count, biochemistry and urinalysis, shown in Table 1. The most significant data were: the presence of transaminases raising more than five times the reference value, assigned to RIPE, and anemia with severe leukopenia, which quickly evolved with thrombocytopenia to pancytopenia. There was a need for blood transfusions during hospitalization. The pancytopenia was attributed to advanced HIV infection, possibly combined with an opportunistic disease that seems to involve the reticuloendothelial system preferably. 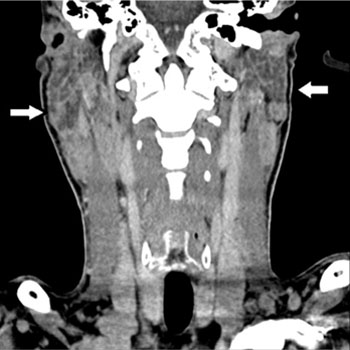 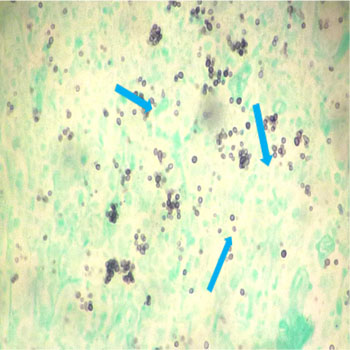 Despite treatment, the patient maintained daily fever peaks and poor dietary compliance, with deteriorating dyspnea, dyslalia and visual alterations. The treatment regimen was substituted with amphotericin B deoxycolate in an initial dose of 0.3mg / kg / day IV diluted in 500 ml of dextrose, infused at 4 hours for cumulative doses, increasing by 5 mg / day every 3-5 days, in the absence of side effects such as hypokalemia and renal failure. One week after initiated treatment with amphotericin, the patient evolved to respiratory failure that made necessary intubation and mechanical ventilation with transfer to the intensive care unit (ICU).
The Patient complicated with the pneumonia associated with mechanical ventilation, being treated with vancomycin 1 g IV 12 / 12h, imipenem 500mg IV 6/6h and polymyxin B 1,000,000 IU 12/12h. After tracheostomy for prolonged intubation, about three weeks later, the patient developed severe thrombocytopenia, massive pulmonary hemorrhage, and death.