The Prevalence of Vitamin D Deficiency in Patients with Hashimoto's Hypothyroidism

Introduction:Vitamin D has some anti-inflammatory and immune-modulating attributes and in recent studies its low levels has been associated with some autoimmune diseases. Hashimoto's hypothyroidism is one of the most common endocrine disease worldwide and in this study the aim is to investigate the relation between the level of vitamin D and Hashimoto's hypothyroidism.

Material and Methodes:40 patients with hypothyroidism and 40 healthy subjects with normal TSH level were selected from Besat Hospital, Hamadan, Iran during the period of April to August 2016. Their serum levels of 25 (OH) D, Anti-TPO and TSH were checked and recorded in the checklist.

Conclusion: Based on the results it can be concluded that there is an association between low level of vitamin D and Hashimoto's thyroiditis.

Vitamin D deficiency is a global problem and more than one billion people worldwide are vitamin D deficient [1]. Vitamin D has an important role in the homeostasis of calcium and phosphate and prevention of osteoporosis [2]. Also vitamin D can prevent excessive cell proliferation and cell differentiation, thus may prevent the development of diseases like cancers [3]. According to the recent studies, vitamin D deficiency is associated with the autoimmune diseases such as rheumatoid arthritis (RA), Systemic Lupus Erythematosus (SLE), Inflammatory Bowel Disease (IBD), Multiple Sclerosis (MS) and Type 1 Diabetes (DM1). Vitamin D can prevent the incidence or progression of these diseases [4]. Furthermore, in a number of articles low levels of vitamin D have been reported on Hashimoto's patients [5,6]. Vitamin D is a fat soluble vitamin which exposure to ultraviolet B light is its main source in the body [5]. Then it will hydroxylate in the liver and turn into the form of 25-hydroxycholecalciferol (25(OH)D) which is its inactive form. Its active metabolite, 1,25-dihydroxycholecalciferol (1,25(OH)2D) which is known as calcitriol is being produced in the kidneys [7]. The normal range of 25(OH)D is 30 to 32 ng/ ml and levels less than 12 ng/mL is concidered as severe vitamin D deficiency [8]. The calcitriol applys its work in the body by binding to vitamin D receptor (VDR). VDR is seen almost in all nucleated cells. Any genetic change in the VDR, predisposes the person to autoimmune thyroid disorders including Hashimoto's thyroiditis and Grave's disease [6]. More than 200 genes are regulated by vitamin D, either directly or indirectly. These genes are responsible for cell devision and differentiation control as well as cell death so vitamin D reduces the division of malignant cells. Vitamin D also inhibits the production of inflammatory factors that are important in the development of Hashimoto's thyroiditis. This hormone not only inhibits the activity of T-cells, but also inhibits the production of interferon gamma, Interleukins and T helper cells. In addition, vitamin D prevents B cells proliferation and induces their apoptosis [9].

In the present study our goal was to examine the relationship between Hashimoto's hypothyroidism and vitamin D deficiency and to find the relation between them.

This Comparative Cross-Sectional study was conducted in the Besat Hospital, Hamadan, Iran during the period of April to August 2016. 40 patients with hypothyroidism and 40 healthy subjects with normal thyroid-stimulating hormone (TSH) level between 0.4 to 5 microU/ml were selected and their serum level of 25(OH)D, Anti-thyroid peroxidase (Anti-TPO) and TSH was obtained. Exclusion criteria were patients with diabetes, chronic renal failure, IBD and other intestinal diseases, liver diseases, lupus, MS and patients who had taken vitamin D supplements. Patients with subclinical (SCH) hypothyroidism with the criteria of Anti-TPO positive and TSH level between 6-10 microU/ml despite normal level of free thyroxin (0.8-2.8 ng/dl) and clinical Hashimoto's hypothyroidism with criteria of Anti-TPO positive and TSH>10 micro U/ml with decrease level of free thyroxin (< 0.8 ng/dl) were involved into the study. Also vitamin D levels less than 12 ng/ml was considered as Vitamin D deficiency [8]. Informed consent was taken from all the study subjects. For data analysis, independent t-test method was used and all comparisons were based on the presence of a significant correlation with p value of less than 0.05.

In this study 80 subjects were evaluated which included 30 men and 50 women. T- test result showed that the average age and gender in both groups were close and no statistically significant difference was observed. Table (1) shows the mean S.D values of age and gender distribution in our study. Also it includes the Serum 25(OH)D and TSH levels in both groups. 67 cases (83.7%) were diagnosed with hypovitaminose D which 39 (58.2%) of them were in patients group and 28 (41.8%) of them were among the control group. Figure (1) demonestrates the persentage of vitamin D insufficiency (serum 25(OH)D <20 ng/ml) and deficiency (serum 25(OH)D <12 ng/ml) in the in control group versus patients with subclinical versus clinical Hashimoto's. The average vitamin D in Hashimoto's patients was 14.8 ± 7.17 ng/ml and in the healthy subjects was 26.08 ± 17.3 ng/ml. According to these results there was a significant difference between the two groups in terms of the vitamin D avarage level. After adjusting the groups for gender and age this result persisted. The mean level of vitamin D was lower in female patients in comparison with male patients but this was not significant.

Table 1: Demographical and clinical characteristics of the studied subjects. 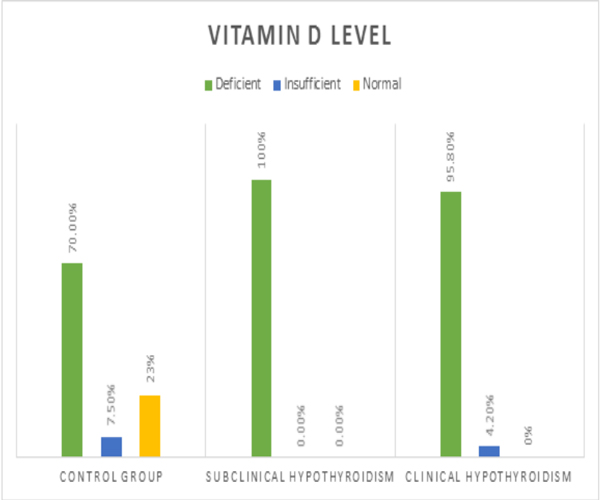 Figure 1: The persentage of vitamin D insufficiency and deficiency in the in control group versus patients with subclinical versus clinical Hashimoto's.

Vitamin D is a fat-soluble vitamin that has an important role in the homeostasis of calcium and phosphate and bone metabolism. Vitamin D controls calcium absorption in the intestine and it mediates skeletal mineralization in cooperation with parathyroid hormone. Also it has some anti-inflammatory and immune-modulating attributes probably caused by its affects on cytokine levels. Recent studies have shown relationship between low vitamin D levels and many diseases like cardiovascular diseases, cancer, and autoimmune diseases such as multiple sclerosis [10]. In Kragt study an inverse relationship was found between vitamin D levels and MS risk especially for vitamin D levels measured in young patients [11]. Also it seems that exposure to sun light in early childhood reduces the risk of developing multiple sclerosis [12]. There are few studies available about the association between the levels of vitamin D and Hashimoto's hypothyroidism and their results are conflicting. Hence in this study we aimed to evaluate the levels of vitamin D among patients with Hashimoto's hypothyroidism compared to healthy subjects. According to Lagunova study the level of vitamin D is related to the gender, age and body mass index (BMI) [13]. In our study the mean level of vitamin D was lower in females in comparison with males in both groups but it was not significant which we can refer it to the small sample size. Our results are similar to Hashemipour [14] and Mackawy [6] studies which show non-significant difference in level of vitamin D between males and females. In contrast, some studies are showing that regarding of the vitamin D level, there is a significant difference between males and females, in some studies it is more in females [15] and in others it is more in males [16]. In a study by Verdoia et al [17], it is found that gender significantly affects the vitamin D level and its lower levels observed in females, plays an important role in the severity of coronary artery disease. Age, race, exposure to sunlight, dietary vitamin D intake, chronic diseases and seasonal variations can be the explanation of the dissension between these studies.

In our study there was no correlation between Vitamin D and TSH levels but in Mackawy [6] study the results showed negative correlation between these two parameters. In addition according to our results, vitamin D level was significantly lower in hypothyroid patients compared to the control group and vitamin D deficiency prevalence was significantly higher in patients in comparison with the controls group.

There are several studies in concordance to our results [5,18]. In a study by Mansournia et al. [19] in 2014, the results demonstrated that in addition to lower levels of vitamin D in patients with Hashimoto's disease compared to healthy individuals, high levels of vitamin D is associated with reduced risk of Hashimoto's hypothyroidism. According to his study, each 5 ng/ml increase in vitamin D levels, reduced the risk of Hashimoto's upto 19%. The mean vitamin D level in this study was15.9 ng/ml in the patients and 24.38 ng/ml in the healthy individuals which is close to the results of our study. In 2009 Goswami et al. [20] cunducted a study on individuals aged 16 to 60 years to determine the relation between the level of vitamin D and thyroid autoimmun diseases. The average vitamin D in patients was 17.5 ng/ml and 87% of them were vitamin D deficient. Also a weak inverse association between the levels of 25 (OH) D and Anti-TPO was entitled. Some articles demonstrate that vitamin D deficiency may exacerbate the onset and development of Grave's disease and its correction can reverse the disease [21]. Vitamin D receptor has been identified in the thyroid follicular cells which can be suggestive of the role of 1,25(OH)2D in the thyroid. It has been shown that vitamin D has an important role in T helpers type 1 and 2 as a regulater. Vitamin D reduces the production of interleukin-2 (IL2), gamma interferon (INF?), and tumor necrosis factor (TNF) and also inhibits the expression of IL-6 and the production of autoantibodies by B lymphocytes [22]. Therefore, vitamin D deficiency may act as an trigger of autoimmune diseases like Hashimoto's and Grave's disease [23].

In summary, based on the results of this study and comparison with the other studies, it can be concluded that there is an association between low level of vitamin D and Hashimoto's thyroiditis. According to this result, it is recommended to do the screening test for Vitamin D deficiency in all hypothyroid patients. It seems that prescibing vitamin D to these patients can prevent the progresion of the disease or even can cause reversion. Latter statement needs more study with larger sample size to determine the effective dose of vitamin D which is needed to reduce disease progression in Hashimoto's thyroiditis.

We thank our colleagues who provided insight and expertise that greatly assisted the research,