Surgical Emphysema of the Forearm Following a Minor Skin Laceration

This article describes a case of surgical emphysema in an 80 year old gentleman secondary to a small isolated full-thickness laceration on the dorsal aspect of the mid-forearm from a minor injury sustained in the bathroom two days previously. The patient had no other systemic symptoms of concern. Infective causes were excluded. It was managed non-operatively and the surgical emphysema resolved spontaneously within two weeks of the injury.

Surgical or subcutaneous emphysema is the presence of gas in the subcutaneous tissues. It is characterised by 'bubbling' of the skin with crepitation on palpation. The signs and symptoms are due to the fact that the gas is mobile within the tissues.
The causes of surgical emphysema are trauma and infection. Traumatic causes can either be accidental or iatrogenic. In both circumstances the gas is usually introduced into the subcutaneous tissues. Examples of this include cervical emphysema after tracheal laceration, chest wall emphysema after rib fracture and lung injury, or surgical emphysema around laparoscopic port wounds.
Significant infective causes of subcutaneous emphysema are gas-producing bacteria, such as those found in cases of gas gangrene, a result of infection with Clostridium perfringens and other clostridia species. These are anaerobic, Gram positive, spore-forming bacilli, although some other bacteria, including aerobes, can also produce gas gangrene [1].
Gas gangrene can be a severe and life-threatening condition. Therefore, the presence of gas in tissues should be taken seriously. In the absence of such an infection, it is unusual to find subcutaneous emphysema without the presence of an obvious injury and method of gas entry.
To our knowledge, there is only one case report of surgical emphysema arising from a minor skin laceration [2]. Interestingly, this was also of the upper limb, from a laceration over the olecranon and the subcutaneous emphysema extended up to the level of mid-humerus and down into the hand. There have been other reported cases arising from bite wounds and wounds cause by assault with blunt instruments [3].

An 80 year old gentleman presented to the out-of-hours primary care clinic having noted 'bubbling" of the skin of his right forearm that morning. The patient described a sensation of 'water running underneath' the skin. On direct questioning no other localised or systemic abnormal symptoms were elicited. The case was subsequently referred to the on-call orthopaedic team for further investigation and management of a potentially serious condition.
On further enquiry, the patient reported that he had caught his arm against something in his bathroom two days previously, resulting in a small skin tear which the patient had not felt was relevant. This had not caused him any significant concern since.
The patient had a past medical history of bowel cancer, deep vein thrombosis and pulmonary embolism, managed with ongoing Warfarin therapy. Other current medication included simple analgesia, lansoprazole and loperamide. He had no allergies. He was a non-smoker, non-drinker and there was no history of intravenous drug abuse.
On examination he was systemically well and afebrile, with a heart rate of 56bpm and blood pressure 112/58mmHg. Respiratory rate was 16/min with an oxygen saturation of 96% on room air. General examination was normal. Clinical examination of the right forearm revealed no swelling or erythema, but there was a visible vesicular appearance of the skin on the dorsal aspect. Subcutaneous crepitus was felt on palpation (Figure 1, Video 1). 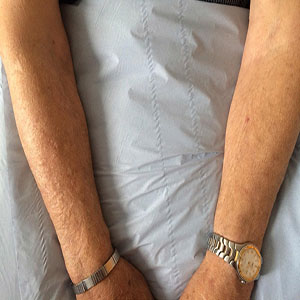 This was not tender to touch, and did not extend proximally past the elbow. A 3cm laceration was present on the proximal forearm, with a small skin flap with no evidence of skin colour change, increased temperature or obvious infection (Figure 2). 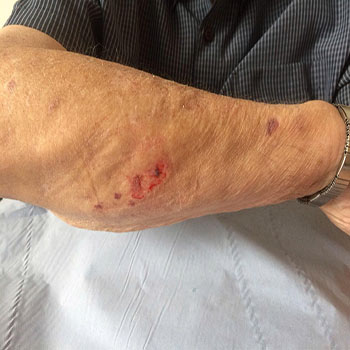 Serological examination was performed which was satisfactory including WCC 8.5x109/L, CRP 2mg/I, ESR 6mm/h and INR 2.2. Blood samples were taken for microscopy and culture and were examined for aerobic and anaerobic organisms. Microscopy was normal and the cultures were reported as sterile after 5 days of incubation.
Two orthogonal view plain radiographs of the right forearm were performed. These showed gas within the immediate subcutaneous tissues which did not extend into deeper tissues. No other abnormalities were noted (Figure 3). 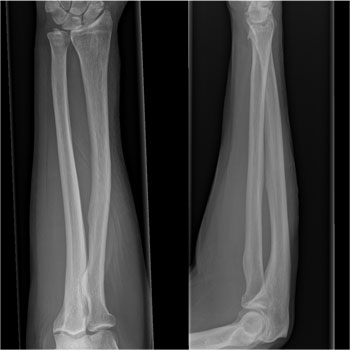 Surgical emphysema is a sign, or clinical finding, rather than a diagnosis. The cause of the emphysema should be the basis of the diagnosis. Therefore, the differential diagnosis must include the causes of surgical emphysema, trauma or infection.
Examination findings, physiological observations and basic haematological tests did not suggest infection, which was the most important cause to exclude. These examination findings were limited to the forearm and the patient had not suffered any respiratory tract or abdominal trauma. The superficial laceration he had sustained two days previously was suspected to be the source of his subcutaneous emphysema.
Vesicular or bullous dermatological conditions were considered but were excluded as early clinical findings were of definite surgical emphysema.

The wound was cleaned and dressed with an adhesive surgical dressing, and the patient was admitted for basic investigations and clinical review. When no abnormality was found on blood results and observation of vital signs, no further treatment was felt necessary and the patient was discharged home. Early outpatient follow-up was arranged for ten days later. The subcutaneous emphysema had resolved, and the small wound had healed.

De and Stevenson [2] reported a similar case of a 78 year old lady with a minor injury over her elbow following a fall, presenting with surgical emphysema of her forearm and hand. In this case, the emphysema was considerably more extensive, and had developed more rapidly over the course of one day following the fall. However it also settled with no active treatment after seven days. It was hypothesised in this case that the skin injury acted as a ball-valve mechanism, allowing air into the subcutaneous tissues, but not out again.
The most urgent cause of subcutaneous gas to identify, in the absence of gross mechanical trauma, is gas-producing organisms. Clostridium perfringens is the most common causative organism of gas gangrene [1]. They are often introduced via a contaminated wound. Such infections cause tissue necrosis and result in a significant systemic response and physiological upset. Deeper tissues, including muscles, beyond the superficial fascial layers can become involved due to necrotising fasciitis. This surgical emergency requires prompt clinical diagnosis and surgical debridement together with intravenous antibiotic therapy managed in a high dependency setting. Removal of dead and infected tissue will often leave a degree of soft tissue loss requiring flap coverage or grafts to enable wound closure, once the infection has been fully treated.
Most other non-infective reported cases involve injury to the respiratory tract, with air being introduced into the subcutaneous tissues under positive pressure. This pressure may be a result of normal breathing, or artificial ventilation. Similarly, it is a well-known phenomenon after laparoscopic surgery, during which carbon dioxide gas is insufflated into the abdomen to improve the space available for surgery. Some gas may be forced into the tissues through the laparoscopy port wounds.
In the presence of traumatic surgical emphysema, consideration must be given to where the air is being entrained from. If a respiratory tract injury is found to be the source, surgical repair is the definitive treatment. Respiratory compromise in these cases can otherwise be rapidly fatal. More rarely, surgical emphysema may result from perforation of part of the gastrointestinal tract. This source must also be considered, identified and repaired quickly. Major physiological compromise can occur from related complications such as mediastinitis or peritonitis.