Our objective is to present three cases of stump appendicitis, a rare surgical emergency. Stump appendicitis is a delayed complication following incomplete appendectomy. There have been fifty one cases reported in the literature thus far. This entity should be part of the differential diagnosis of any patient complaining of right lower quadrant pain with a previous surgical history of appendectomy. Failure to diagnose and delay of treatment may result in stump perforation and intra-abdominal sepsis. We report three cases of stump appendicitis in adults, presenting with right lower quadrant pain confirmed by computed tomography (CT) studies.

First described in 1945 by Rose, stump appendicitis (SA) results from re-inflammation of residual appendiceal tissue after an appendectomy [1]. While appendicitis is one of the most common causes of emergent surgical intervention for acute abdominal pain, stump appendicitis (SA) is exceedingly rare. The true incidence of stump appendicitis remains unknown. In one review, only 51 cases of SA were reported until that point, with age range of 8-72 [2]. Despite its rarity, missed SA may result in perforation, sepsis and stump gangrene [2]. While the majority of cases are reported in journals of surgery, there is a paucity of cases in Emergency Medicine. We report three cases of SA which have presented to our community emergency department.

A 45 year old female with no past medical or surgical history presented in June 2009 to the ED with right lower quadrant (RLQ) pain, nausea and vomiting starting 6-8 hours prior. Vital signs were blood pressure of 111/69 mm Hg, pulse 91 beats per minute, and afebrile, with the patient reporting pain to be 3/10. Patient had an elevated white blood cell count (WBC) of 23,000/mcL and neutrophils at 92 %, indicating acute inflammation. CT findings were consistent with acute appendicitis. Laparoscopic appendectomy was performed removing an inflamed appendix 6cm in length and 1 cm in diameter. Patient was discharged after an unremarkable surgery and recovery.
This patient presented to the emergency department (ED) again in March 2010 with RLQ pain, nausea and constipation. Vitals were blood pressure of 129/80 mm Hg, pulse of 118 beat per minute, temperature of 99.4 degrees Fahrenheit. Patient reported pain to be 5/10 and the CT scan showed inflammation around the appendiceal stump. Laboratory findings included elevated WBC count at 13,100/mcL and CRP elevated at 13.4 mg/dl. The appendiceal stump was removed via laparoscopic technique measuring 3.1cm x 1.1cm x 0.7 cm. Patient again recovered well in the post-operative period 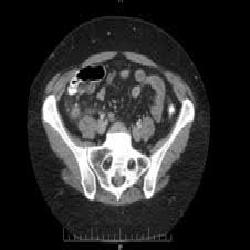 Figure 1:This image from March 2010 displays a slice of the CT scan of the abdomen with evidence of an inflamed appendiceal stump.

We report a second case of a 51 year old woman who presented to the ED in February 2010 with complaints of abdominal pain of 2 days duration. The patient underwent an uneventful laparoscopic removal of a ruptured appendix with irrigation of the peri-colic gutter. Patient was discharged on postoperative day 4.
The patient presented to the ED in August 2010 complaining of nausea, vomiting, and pain similar to the appendicitis she had earlier that year. The patient presented with positive guarding and positive McBurney's sign. Laboratory studies showed a WBC count of 11,000/mcL and a CT scan suspicious for ruptured appendiceal stump. The laparoscopic procedure was performed and purulent fluid was drained from the pericolic gutter. Due to the inability to locate the appendiceal stump the procedure was converted to an open appendectomy. The inflamed appendiceal stump measured 3-4cm in length. Patient tolerated procedure well and was discharged on postoperative day 3. 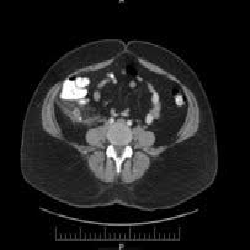 Figure 2:This image from August 2010 displays a slice of the CT scan of the abdomen with evidence of an inflamed appendiceal stump.

A 72 year-old male, with a past medical history of non-insulin dependent diabetes and hypertension, presented to the emergency department for evaluation of bilateral upper abdominal pain that started one day prior to presentation associated with nausea and several episodes of non-bilous vomiting. For the past five days, the patient had been taking ciprofloxacin for a urinary tract infection. Of significance, the patient had a laparoscopic appendectomy 9 months prior to presentation and felt his current pain was similar.
Our examination revealed a non-toxic appearing patient with mild to moderate pain in his right and left upper quadrants without guarding or peritoneal signs. Specifically, the patient did not have tenderness over his McBurney's point. A CT of the abdomen and pelvis with oral and intravenous (IV) contrast was performed. The patient was given 4 mg of morphine to help alleviate his pain.
A complete blood count was significant only for a WBC count of 12,700/mcL with 83.7 % neutrophils. A mildly elevated lactate of 2.3 mmol/l and a decreased magnesium of 1.4 mg/dl were the only other abnormalities noted on laboratory values. A urine analysis was not performed in the emergency department.
A CT of the abdomen and pelvis revealed diffuse thickening of the appendix with new prominent peri-appendiceal inflammatory changes consistent with acute appendicitis.
General surgery was consulted and patient was admitted. The following morning, the patient underwent laparoscopic appendectomy which was ultimately converted to an exploratory laparotomy with right hemicolectomy upon the discovery of a cecal perforation. The patient did well after his surgery and was ultimately discharged to home. 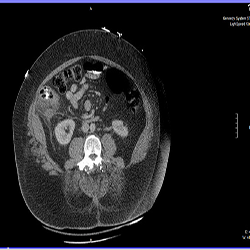 Figure 3:This image also displays slice of the CT scan of the abdomen with evidence of an inflamed appendiceal stum of a man who had appendectomy several months prior.

Stump appendicitis occurs from re-inflammation of residual appendiceal tissue after an appendectomy [1]. While the exact cause of re-inflammation remains unknown, poor blood supply and/or fecolith impaction are thought to play a role [1]. While an exact incidence of SA has never been reported, cases as soon as 2 weeks to as long as 23 years after appendectomy have been reported [3]. Further, SA has been reported after both laparoscopic and open appendectomies with slightly increased rates after laparoscopic appendectomies [4].
Patients with SA often present with symptoms similar to appendicitis: nausea, vomiting, leukocytosis and lower abdominal pain [4]. However, secondary to history of prior appendectomy, the diagnosis of SA is often not considered. Diagnosis of SA remains similar to appendicitis with CT and ultrasound being the modalities of choice [1].

Despite its rarity, missed SA may result in perforation, sepsis and stump gangrene [2]. SA has nearly a 70 % rate of perforation [5]. High clinical suspicion along with CT scan remains the best modality for diagnosis. Emergency physician should still consider CT scans for RLQ pain in patients who have had a previous appendectomy [6-9]. Emergency Department physicians need to consider SA as a differential diagnosis in anyone with abdominal pain and history of appendectomy to be sure not to miss a diagnosis with a potential for such a high morbidity and mortality.