Computed tomography of lumbosacral spine demonstrated sacrococcygeal agenesis. The two iliac bones are close to each other to replace the absent sacrum and coccyx. Patient also had bilateral club foot. 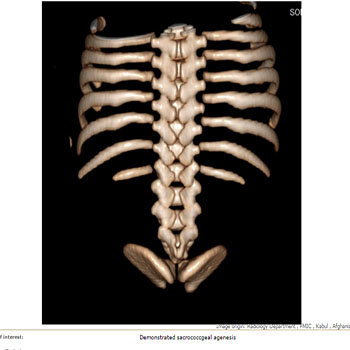 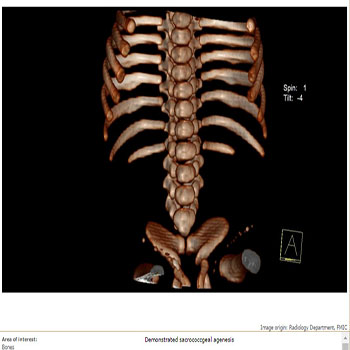 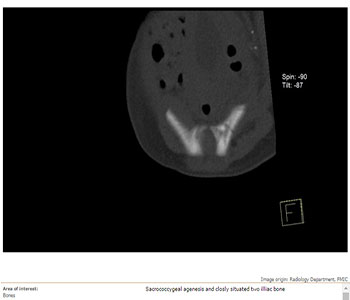 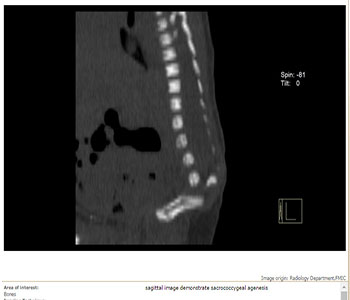 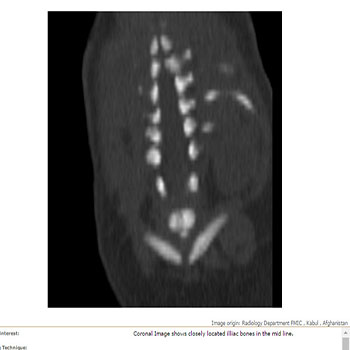 Sacral agenesis was first described by Hohl in 1852 [1]. Sacral agenesis is rare entity occurring in 0.01% -0.005% of the population [2]. Duhamel coined the term caudal regression syndrome to describe a spectrum of congenital malformation; these range from simple anal atresia, to absence of sacral (sacral agenesis), lumbar and possibly lower thoracic vertebrae (caudal aplasia/dysplasia), to the most severe form with fusion of the lower extremities and major visceral malformation known as sirenomelia [3]. There is also an increased frequency of spinal cord abnormalities is seen in patients with sacral agenesis, including syrinx, tethered cord, lipoma, and lipomyelomeningocele [2].
Maternal Diabetes, genetic predisposition and vascular hypoperfusion have been suggested as possible causative factors [4]. A higher frequency, in the range of 0.1%-0.2%, has been observed in children of diabetic mothers [2]. Insulin injections may have a teratogenic effect on the embryo. This view has been supported by by Duraiswami (1950) who has experimentally produced caudal regression in chickens by injecting insulin into the eggs [1].
Typically child present with flattened buttocks and shortened intergluteal cleft with absent lumbar lordosis .The pelvic ring is completed with either direct apposition of the iliac bones or with interposition of the lumbar spine replacing the absent sacrum. Scoliosis occasionally occurs. Visceral abnormalities such as anal atrasia, fused kidneys and congenital heart malformations are not uncommon [1]. The spectrum of sacral agenesis can be categorized into four types.
In type 1, partial unilateral agenesis is localized to the sacrum or coccyx.
In type 2, there are partial but bilaterally symmetric defects in the sacrum. The iliac bones articulate with S1, and distal segments of the sacrum and coccyx fail to develop.
In type 3, there is total sacral agenesis and the iliac bones articulate with the lowest available segment of the lumbar spine.
In type 4, there is total sacral agenesis and the iliac bones are fused posteriorly along the midline [2].
The diagnosis is often made late in pregnancy. Early detection of caudal regression syndrome at 11 weeks of gestational age by transvaginal ultrasound scanning was reported. In the first trimester crown-rump length was found to be smaller than expected in caudal regression using abdominal ultrasound [4]. CT scan is not contributory enough and shows lumbosacral agenesis.MRI is the investigation of choice [5]. The management of these cases is symptomatic for each system, and the treatment should start as soon as possible [1].