Resolving Vitreous Hemorrhage in the setting of Diabetic Retinopathy

This case series presents 2 patients (67 and 58 year old females) with resolving vitreous hemorrhage in the setting of diabetic retinopathy. Both patients had around 50% of the retina still visible and the hemorrhage was confined at the posterior vitreous cavity near the retina. Hence, partial panretinal photocoagulation was feasibly applied. On B-scan, both cases showed a liquified vitreous with a complete posterior vitreous detachment (PVD). For both patients, vitreous hemorrhage resolution occurred at less than 4 months from onset. Vitreous hemorrhage differs with bleeding in other tissues with the following characteristics: (1) Rapid Clotting, (2) Slow lysis of fibrin, (3) extracellular lysis of RBCs, (4) Persistence of RBCs for months, (5) Lack of PMN response. The presence of vitreous collagen matrix promotes rapid clotting and hinders resolution of hemorrhage by preventing passive diffusion; hence also delay inflammatory cellular response. Hemolysis is more important than phagocytosis and transportation of debris by macrophages for the removal of whole blood in vitreous. The prognosis for clearing hemorrhage was better when the fundus reflex was brighter and the retina adjacent to the ora serrata was visible. Clearing occurred sooner when hemorrhage was retrohyaloid rather than in the vitreous gel. Posterior vitreous detachment status has also been implicated in diabetic retinopathy progression. Partial PVD had a significantly higher rate of diabetic progression than no-PVD and complete PVD due to the presence of vitreoretinal traction/adhesion which serves as a scaffold for neovascular growth towards the vitreous.

The 1st case is a 67 year old female with uncontrolled diabetes for 20 years. Vision at consult was 2/60 on the right and 6/7.5 BCVA on the left. Ocular pressure for both eyes were normal. Her right eye had vitreous hemorrhage occupying half of the retina including the macula. Laser photocoagulation was immediately applied on the retinal areas free of hemorrhage. The left eye, on the other hand, had a beginning retinopathy with micoraneurysms and exudates. The patient was on close observation with high back rest and comanagement with her endocrinologist for sugar control. Every now and then, laser would be applied to areas of the retina that had been recently uncovered from the receding hemorrhage. She was also advised for vitrectomy if the hemorrhage does not resolve. After 3 months, the hemorrhage resolved and vision improved. At this point, we were able to complete the panretinal photocoagulation and do fundus photograph and OCT of the macula (Figure 1 & 2). 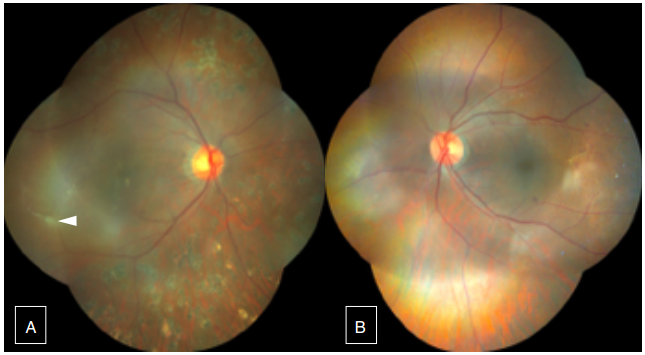 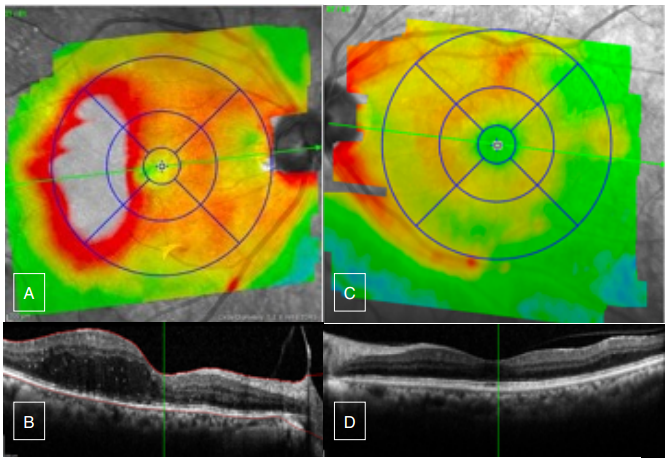 Figure 2: Case 1, OCT, OU. A & B) Right eye showed edema of the temporal macula involving fovea, there is PVD from the macula but still attached to the optic nerve. C & D) Left eye has partial PVD, otherwise it is unremarkable.

The 2nd case is a 58 year old female, also with uncontrolled diabetes for 10 yrs. She was a known case of proliferative diabetic retinopathy with panretinal photocoagulation done on both eyes. Patient got lost and a year after came back with vitreous hemorrhage of the right eye. Visual acuity of the right eye was 6/30 and on the left was 6/7.5. Ocular pressure for both eyes were normal. On examination, the hemorrhage was covering the entire macula, however the peripheral retina was clear of hemorrhage, hence, we were able to augment laser on these areas. We also added laser to the left eye. Patient was scheduled for vitrectomy on the 4th month however on preoperative examination, the vision of the right eye improved to 6/10 and the vitreous hemorrhage has already resolved. Thereafter, further laser augmentation was done to the right eye closing in to the arcade vessels. Fundus photo and macular OCT were also done (Figure 3 & 4). 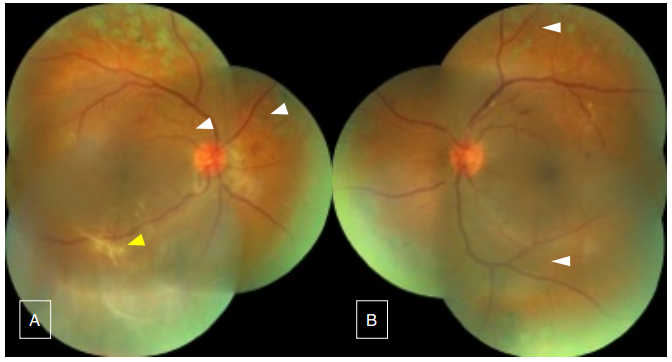 Figure 3: Case 2, Fundus photo OU. A) Right eye, after resolution of vitreous hemorrhage: there are neovascularizations (white arrow), and the yellow arrow points to a fibroproliferative membrane probably this was the source of bleeding, laser scars are seen outside the arcade vessels, foveal reflex is dull. B) Left eye: laser scars outside the vascular arcade, there are suspected neovascularizations seen (white arrows), dot and blot hemorrhages in the nasal and superior retina, exudates in circinate pattern at the superior distal temporal arcade. 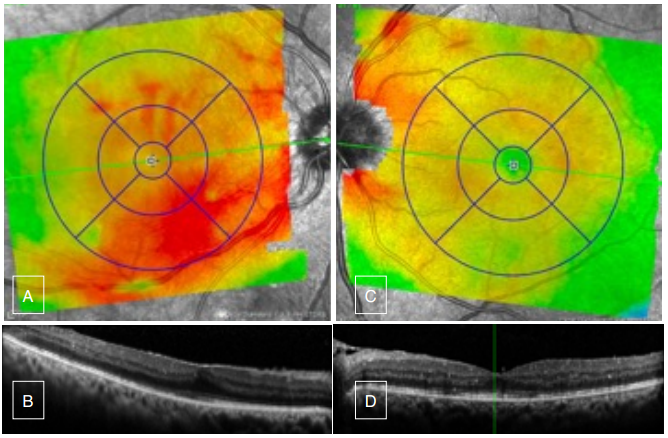 Catabolism of Blood in vitreous

When hemorrhage occurs in our body, coagulation begins instantly after an injury to the blood vessel has damaged the endothelium lining the vessel. Platelets immediately form a plug at the site of injury and additional coagulation factors respond in a complex cascadeto form fibrin strands, which strengthen the platelet plug [1]. Extravasation of blood intotissue causes an inflammatory reaction, the initial response of which is mainly of the polymorphonuclear cells (PMNs). Fibrin dissolution is a result of PMN response. In the second phase starting around 2 days, macrophages derived from the mononuclear phagocyte system migrate into the hemorrhage and phagocytise erythrocyte and cellular debris. Later on, within 2 weeks, granulation tissue extends into hematoma and resorbs hemorrhage, which eventually is replaced by scar [2].

Inside the eye, vitreous hemorrhage differs from the hemorrhage that occurs in general as described earlier, through the following characteristics: rapid clot formation, slow lysis of fibrin, extracellular lysis of red blood cells, persistence of intact red blood cells for months and lack of early PMN response [2].

Bleeding into vitreous gel results in rapid clot formation. Peculiar because tissue thromboplastin activity in the vitreous is low (tissue thromboplastin is a clotting factor necessary for the clotting process). This is the case even in animals studies where they injected anti coagulated blood into the eye, rapid clot formation would still ensue. The vitreous collagen facilitates platelet aggregation and an enhancement of clotting via the intrinsic clotting process and membrane formation. On the other hand, passive diffusion of red blood cells and fibrin debris, which is necessary for reabsorption, are inhibited by the latticework of vitreous collagen fibers [2].

Lysis of fibrin in the formed vitreous is very slow due to the low level of vitreal tissue fibrinolytic activity and lack of a PMN response. In rabbit studies, fibrin in vitreous clots is fully cross-linked and is more resistant to digestion by plasmin [2].

In the usual course of hemorrhage in general, macrophages derived from the mononuclear phagocyte system, migrate into the hemorrhage site and phagocytise erythrocytes and cellular debris. The process of phagocytosis and lysis by macrophage within its cell, is the “intracellular” process. “Extracellular” lysis of erythrocyte, on the other hand, is rather unusual, but this is the one that occurs inside the eye. Red blood cell lysis in vitreous hemorrhage can be the result of: (1) extracellular release of Lysosomal enzymes by macrophages or by (2) autohemolysis. Authors suggested that hemolysis is more important than phagocytosis and transportation of debris by macrophages for the removal of whole blood in vitreous. This is probably because smaller particles makes it easier to diffuse out of the eye for reabsorption. A study on rabbit eyes on resorption rate of blood injected intravitrealy found that hemolyzed blood exited the eye five times faster than the rate of whole blood [2].

Another unusual feature of catabolism of blood in the vitreous is the fact that intact blood cells can be seen histologically for many months. Degradation of RBCs occurs as an intracellular process which is phagocytosis by macrophages, in the vitreous, however, this does not happen frequently as described earlier. Red blood cells presumably metabolically adjust to conditions in the vitreous. Fresh RBCs are not readily covered by opsonins in turn fails to elicit a macrophage reaction therefore not ingested [2].

Cellular response in vitreous hemorrhage is unusual compared to hemorrhage in other tissues because of lack of an early PMN reaction. In turn, this leads to lack of fibrin degradation products [2].

The sparse cellular response seems to be directed toward phagocytosis of RBC debris rather than whole RBC, whereas the main mass of fibrin clot is poorly penetrated [2].

Clearance of blood in vitreous

Clearance of blood in vitreous is a slow process with a time constant of 1% per day. In a vitreous hemorrhage, blood and debris migrate from the body of the vitreous toward the posterior pole. This is because the circulation of fluid in the vitreous is from the ciliary area to the posterior pole. Various studies have indicated that macrophages play only a minor role in this migration. When the blood and debris reach the retinal vessels, the soluble derivatives are absorbed and the insoluble particles are phagocytosed and carried out along the perivascular space. Some RBCs may also find its way to anterior chamber angle and the trabecular meshwork or iris stroma [2].

Vitreous hemorrhage in the setting of diabetic retinopathy

In a 1980 study by Ziemnaski et al, they followed 85 eyes with severe vitreous hemorrhage on initial visit up to 10 years. They found out that 30% of eyes exhibited improvement, 28% with unchanged VA and 42% worsened. They also noted that the prognosis for clearing hemorrhage was better when the fundus reflex was brighter and the retina adjacent to the ora serrata was visible. Clearing occurred sooner when hemorrhage was retrohyaloid rather than in the vitreous gel. Going back to our patients, around 50% of the retina is still visible and the hemorrhage was confined at the posterior vitreous cavity near the retina. It is also mentioned that when the vitreous is more liquefied, hemorrhage has better passive diffusion hence have a faster absorption. Ocular ultrasound (B-scan) was done to the 2 patients’ affected eye and both showed liquified vitreous. For the first case, posterior vitreous detachment (PVD) was almost complete, the only remaining attachment is to the optic nerve. On the other hand, there was a complete PVD for the second case. (Figure 5) [3].

The status of PVD in diabetic eyes, has also been implicated in the progression of diabetic retinopathy. A pooled analysis of studies looking at the presence of a complete, partial or absent PVD in a number of macular and retinal diseases was done by de Smet et al, which involved a meta analysis of 5 studies of more than 2000 eyes of diabetic patients. They observed that partial PVD had 24 times greater prevalence of PDR vs No-PVD. When it comes to progression, partial PVD had 6 times higher rate of progression than No PVD, and 15 times higher rate than Complete PVD [4]. We wonder why partial PVD is implicated for the severity and progression of diabetic retinopathy. The process of PVD usually begins outside the vascular arcade with vitreoretinal adhesions at sites of neovascularization. Neovascularizations are pulled forward by the contracting vitreous gel and grow along the posterior surface of the detached vitreous cortex. Partial PVD is usually associated with severe fibrovascular proliferation which is prone to hemorrhages, tractional retinal detachment and breaks[5].