Subsequently, the defect was seen to be concentrated in a few special areas of the world, namely the Mediterranean countries, Japan, Iran and in the USA among the AfricanAmerican population [3].

Recently, a homozygous case with this defect has been reported from Argentina [4]. Previously only a few heterozygotes were reported from Latin America in Venezuela, Costa Rica and Brazil [5, 6].

We now report another family from Argentina. The propositus is a 79 year old male with an Argentinean background and whose parents were not consanguineous. The patient is not related to the previous family with this defect described in Argentina [4]. The patient is asymptomatic but refers that he showed some excessive bleeding after tooth extractions. At the age of 76, he underwent prostatectomy. Because of the prolonged PT and low FVII he was treated with 40 mcg of activated FVII. No excessive bleeding or any other complication occurred.

The patient has a low FVII level (3% of normal) using a rabbit brain thromboplastin and a near normal level if a human tissue or human recombinant thromboplastins are used in the assay system (60% of normal); FVII activity is 100% of normal using an OX brain thromboplastin. FVII antigen is also normal. On the basis of these clotting discrepancies suggestive of a FVII Padua defect, molecular biology tests were indicated. These were carried out as follows. Nucleic acids were extracted from dried thick drops of whole blood blotted on Whatman paper. For this purpose we used the kit (QiAmp DNA minikit) supplied by QIAGEN Laboratories (Qiagen s.r.l., Milan, Italy).

Primers are listed in Table 1 together with respective annealing temperatures. To investigate Exon 8, two pairs of primers (8AF, 8AR, 8BF, 8BR) were used due to the large size of the Exon 8 (2269 bp). PCR was carried out in a total volume of 15μL with 50ng of genomic DNA, 10mM of each primer, and 9 µl of 2X PCR Master Mix, (Promega, Madison, Wisconsin, U.S.A.). Thermocycling conditions are the following: after an initial denaturation step at 95°C for 5 minutes, amplification was performed for 35 cycles of denaturation at 95°C for 1 minute, respective annealing temperature for 1 minute, extension at 72°C for 2 minutes and final extension at 72° for 7 minutes.

After the amplification step, we passed directly to the sequencing, without the gel detection, because the PCR protocol for this gene has been optimized (2). PCR products were bidirectionally sequenced using the ABI PRISM BigDye Terminator Cycle Sequencing Ready Reaction Kit and ABI3130 Genetic Analyzer (Applied Biosystems, Foster City, Ca, U.S.A.).

The patient was found indeed to be homozygous for the Arg304Gln mutation (Figure.1). The children of the propositus were found to be heterozygotes for the same mutation. Only one of them, a 47 year old male, had noted excessive bleeding after a tooth extraction. The wife of the propositus was instead normal. 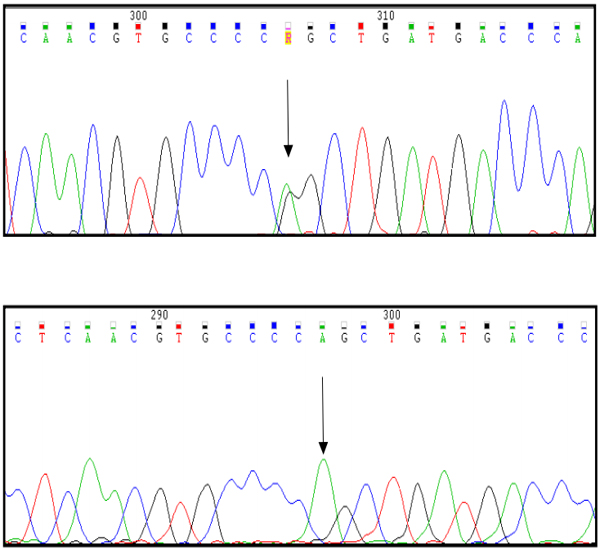 Sequencing results in a heterozygous daughter of the propositus (A) and in the propositus who is a homozygote (B). No other genetic abnormalities were present in the two patients.

The discovery of two unrelated homozygous patients in such a short period of time in the same country suggests that other similar cases may exist. Due to the heavy emigration to Argentina from Southern Europe or Mediterranean Countries, that occurred in the past, the finding is not surprising.

The observation of these two cases indicates that Argentina may represent another country or area in which the defect is frequent.

A few other cases of FVII deficiency have been described in Argentina but there is no molecular biology confirmation that could define the type of defect and their having the FVII Padua mutation [7, 8]. The present observation has once again underscored the diagnostic value of the discrepancies seen in FVII assays using rabbit brain, human placenta, human recombinant and ox-brain derived thromboplastins [9].

Argentina should be added to the list of areas or countries where FVII Padua is relatively common, namely the Mediterranean area, Japan and USA [3]. However, further studies like FVII mutation screening in a large number of patients is needed to establish this observation.