Spontaneous preterm birth is the leading cause of perinatal morbidity and mortality. Several methods were found to be helpful in preventing preterm deliveries in singleton gestations. Those include progesterone administration and different cervical cerclage. Arabin Pessary which is a silicone made device has been explored in recent years as a method of preterm birth prevention. In contrast to singleton gestations, neither progesterone administration nor cervical cerclage were found to be affective in a multi-gestational pregnancy. Our article describes three cases with increased chances of preterm delivery. Two singletons and one multi-gestational pregnancy. All three women received a cervical Arabin Pessary in addition to the accepted treatment of progesterone. All three women had favorable results and delivered healthy infants. We concluded from our experience and from trials conducted in centers around the world that cervical Arabin Pessary is beneficial in preventing preterm birth both in singleton and in multi-gestational pregnancies.

A 40 year old gravida 5 para 1, turned up for a medical evaluation 23+6 weeks gestation after in vitro fertilization [IVF] due to lower abdominal pressure. Primary evaluation determined 20 millimeters cervical length with a U shaped funneling. Her history included a genetic screening which demonstrated 2% 45 x0, 4% 47xxx and 94% 46 xx genetic mosaicism. During her previous pregnancy she experienced cervical shortening at 16 weeks gestation. McDonald's cerclage was administered.
At 25 weeks gestation cesarean section was performed after she experienced septic shock and the cerclage was removed. Her first trimester genetic screening determined a 1:95 chance for down's syndrome. Second trimester genetic screening determined a 1:170 chance for down's syndrome. She refused to go throw amniocentesis. 200 mg of Uterogestan®( Laboratoires Besins International) was given once daily and Arabin Pessary was inserted upon the cervix. During her admission period she was diagnosed with gestational diabetes mellitus which was well controlled with a low carbohydrate diet. She was discharged at 27 weeks gestation and returned to labor and delivery in active labor 36+4 weeks gestation. She delivered vaginally.
The fetus weighed 2400 gram and received Apgar scores of 9 and 10 after 1 and 5 minutes.

A 25 year old gravida 1 para 0 bichorionic biamniotic twin pregnancy after intrauterine insemination[IUI] turned for a medical evaluation 25 weeks gestation due to uterine contractions. Her medical history is within normal limits and so does her first and second trimester genetic screenings. Her cervical length was 23 mm dilated to 3 cm [figure 1].
In addition, the amniotic sac was exposed at the external cervical os. Her Monitor exhibited recurrent contractions. After Atosiban®[Ferring] administration contractions have subsided. She received magnesium for neuroprotection and Celestone. Arabin pessary was installed upon the cervix [figure 2]. The patient was weekly examined till 32+3 gestational week when upon speculum examination, the cervix seemed closed and the sac was no longer exposed. The patient was discharged at 34+3 weeksgestation and returned at 36+4 weeks gestation due to contractions. The patient gave birth by cesarean section due to breech presentation of the primary twin. 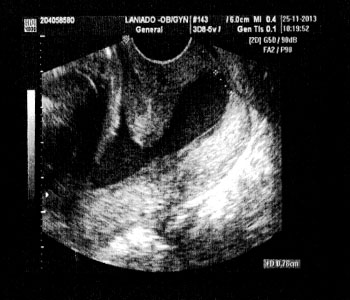 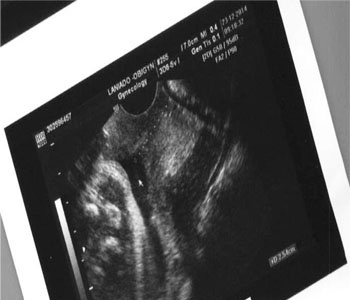 A 31 year old gravida 2 para 0 turned for a medical evaluation 17 weeks gestation post IVF due to lower abdominal pressure. Her obstetrical history includes late abortion after IVF treatment at 18 weeks gestation due to premature preterm rupture of membranes [PPROM]. Her ultrasound examination visualized a shortened 14 mm cervix with no dilatation but with a U shaped cervical funneling.
Uterogestan®( Laboratoires Besins International) was initiated and Arabin Pessary was installed upon the cervix. Her urine analysis indicated a urinary tract infection and antibiotics were administered. 3 weeks post admission she stared complaining of recurrent uterine contractions and bimanual examination diagnosed 4 cm dilated cervix with intravaginally bulging amniotic sac. Tocolytics were given and the contractions subsided. During 29+4 weeks gestation, the patient started complaining once more of uterine contractions. Bimanual examination demonstrated 6 cm dilatation and the cervix was fully effaced. Pessary was removed. The patient delivered 2 days after during 30 weeks gestation by regular vaginal delivery. While in the hospital the patient performed oral glucose tolerance test and was diagnosed with gestational diabetes mellitus A2.

The leading cause of perinatal morbidity and mortality is preterm birth.
Its incidence is around 5%-13 %[ 1-4]. Although neonatology and neonatal intensive care units are developing in an inclining rate, they still struggle with complications of preterm delivery. Complications of preterm delivery include respiratory distress syndrome, necrotizing enterocolitis, intraventricular hemorrhage and even death. Only about 10% of pregnant women have a history of preterm delivery hence preventive measures can be initiated as early as 16 weeks gestation [5]. In multi-gestational pregnancies, preterm deliveries are a known complication but effective methods of prevention are yet to be found.
When comparing preterm deliveries in singleton and multigestational pregnancies 6-10% as opposed to 60% delivered before 37 weeks gestation and 1% as opposed to 12% delivered before 32 weeks gestation.
In recent years more and more trials were conducted with the cervical Arabin Pessary in order to try and prevent preterm birth in cases of shortened cervical length in singleton pregnancies. The results were positively reassuring. Arabin and colleagues reported a preterm birth rate of zero when Pessary was inserted to women with short cervical lengths at 22 weeks compared to nearly 50% in a matched control group [9].
Chochrane review of 2013 describes one randomized controlled trial from 2012 which was conducted by Goya et al. and could be accounted for as a correct trial evaluating the Pessary's performance [6]. Prevention of preterm delivery due to cervical shortening in multi-gestational pregnancies by Arabin Pessary wasn't examined in randomized controlled trials. In contrast, prevention of preterm deliveries in multigestational pregnancies in general by the use of Arabin Pessary was examined and found to be without benefit except for when cervical length was below 38 mm [7]. Further trails in multi-gestational pregnancies should be conducted with a specific emphasis on cervical length below 25 mm. with our patients we experienced the full benefit of Pessary use. The exact mechanism is not fully understood. The angle change between the cervix and the uterus and sac is what thought to prevent preterm birth.
The angle change can be seen either via direct vision with the speculum or with the transviginal ultrasound. The angle change distributes away from the internal os and onto the vaginal floor, retrosymphyseal osteomuscular structures and cul de sac [8]. In our cases, Pessary was administered as soon as cervical dynamics change was diagnosed. In two of the three cases the amniotic sac was exposed in the cervical outlet or the vaginal vault. This in addition to cervical shortening increased the risk of preterm birth exponentially. The dilatation of the cervix which exposed the amniotic sacs stopped and even regressed in the twin case after Pessary administration. This could be explained by the fact that since the pressure of the gravid uterus and sac was no longer on the cervical os, biochemical changes which prepare the cervix for delivery ceased and even regressed. This point out that stopping the rearrangement process of the cervix as early as possible is of at most importance. If done on time, the cervix might even recover or at least biochemically reverse itself. In all three cases Pessary administration proved to be of significant benefit in preventing or postponing preterm delivery. Pregnancy outcomes were consistent with those described in English literature. It is from our experience and literature review that we recommend the usage of Pessary both in singleton and multi-gestational pregnancy as a method of preterm pregnancy prevention.