Posterior reversible encephalopathy syndrome (PRES) is a multipathological entity with a common ending point-dysfunction of the blood-brain barrier and formation of vasogenic edema, defined by a unique brain magnetic resonance (MR) imaging pattern with white matter abnormalities. Among atypical underlying causes, intracranial hypotension has been reported in few cases. We present what we believe to be another case of PRES possibly associated with intracranial hypotension, in absence of other known contributing factors. A 68-year-old woman with a dural tear was treated with lumbar liquor drainage and judged to have been cured. Three weeks later she suddenly presented with somnolence, agitation and disorientation. Brain MR showed hyperdense cortico-subcortical FLAIR lesions predominately in both occipital lobes. None of the typical predisposing factors were present. During the following 4 weeks the symptoms regressed significantly without any treatment, with follow up MRI also showing a clear remission of the hyperintense lesions in the temporal and occipital lobes. Data from individual cases suggest that intracranial hypotension may lead to PRES-like radiological patterns. Further observations are necessary to confirm this hypothesis and establish a pathological theory that would bind the two entities. The working theory could be based on compensatory vein dilatation and stagnation of venous flow leading to cytotoxic edema.

Posterior reversible encephalopathy syndrome (PRES) was initially described by Hinchey et al. [1] as a neurotoxic state accompanied by a unique brain magnetic resonance (MR) imaging pattern with white matter abnormalities. The subcortical parieto-occipital areas are most commonly involved, though a cortical affection has been observed in about 10% of patients in larger series [2]. The mechanism behind the developing vasogenic edema and typical imaging is not known. The first theory to be proposed postulated that the onset of PRES is brought on by vasoconstriction and hypoperfusion, leading in time to brain ischemia and subsequent vasogenic edema. A second, newer theory proposed that the syndrome originates through severe hypertension that leads to failed auto-regulation, subsequent hyperperfusion and endothelial injury/vasogenic edema of the white matter [3]. The main problem of this theory is that the necessary pre-existing condition of severe arterial hypertension is absent in about 20% of all PRES cases, and even when present often does not reach the limits of autoregulation failure [4,5].

A long list of other underlying conditions that can lead to PRES has since been described, among them organ transplantation, many differing kinds of autoimmune disease, numerous drugs used in chemo- and immunotherapy [6] and even blood transfusion [7]. The fact that the condition can be precipitated by such a different array of factors gives weight to the idea that PRES is indeed a multi-pathological entity with a common ending point-dysfunction of the blood-brain barrier and formation of vasogenic edema.

Among atypical underlying causes, intracranial hypotension has been reported in a single case by Pugliese et al. [8]. A 41-year-old woman with epidural anaesthesia for caesarean section presented with clinical and radiological symptoms of both intracranial hypotension and PRES. The possibility of compensatory venous distension and impaired venous drainage leading to increased venous pressure and extravasation of fluids, which in turn would lead to the development of PRES, was discussed.

Furthermore, Rajan et al. [9] presented a case of another 38-year old female with no signs of (pre) eclampsia and an elective caesarean section under spinal anaesthesia who developed a typical PRES pattern on brain MR after presenting clinically with a classic post-dural puncture headache 3 days prior. The pain changed its characteristics and became continuous with no relief in recumbent posture, and the patient presented with generalized tonic-clonic convulsions on the day the brain MR was done.

We present what we believe to be a new case of PRES possibly associated with intracranial hypotension, in absence of other known contributing factors.

A 68-year-old woman presented a dural tear as a complication of her lumbar disc hernia surgery. The tear manifested itself through a liquor leak through the operational wound. The patient had no other clinical complaints. She was treated with lumbar liquor drainage that remained in place for 14 days, after which the tear was judged to have been closed. Three weeks after lumbar catheter removal she suddenly presented with somnolence, agitation and disorientation. Posterior cerebral infarction was initially suspected after emergency brain CT showed a hypodensity in the right occipital lobe. Brain MR
however showed no alteration on diffusion weighted sequences and presence of hyperdense cortico-subcortical FLAIR lesions predominately in both occipital lobes (Figure 1). Based on these findings, a diagnosis of PRES was suspected, though none of the typical predisposing factors were present. Moderate arterial hypertension and type 2 diabetes were known vascular risk factors, however normal arterial pressure values were registered during the hospital stay. There was no history of autoimmune or tumoral disease; no intake of PRES associated drugs, and no signs of sepsis. There were also no signs of vasospasm on transcranial color-coded duplex ultrasonography. Lumbar puncture was performed and offered strictly normal results. Unfortunately, intracranial pressure could not be measured at the time. A lumbar MR still showed presence of serous liquid near the operative entry, though clinical symptoms of intracranial hypotension were furthermore absent.

During the following 4 weeks the symptoms regressed significantly without any specific treatment, leaving only a mild attention and short-term memory deficit. Follow up MRI 10 weeks later showed a clear remission of the hyperintense lesions in the temporal and occipital lobes (Figure 1). 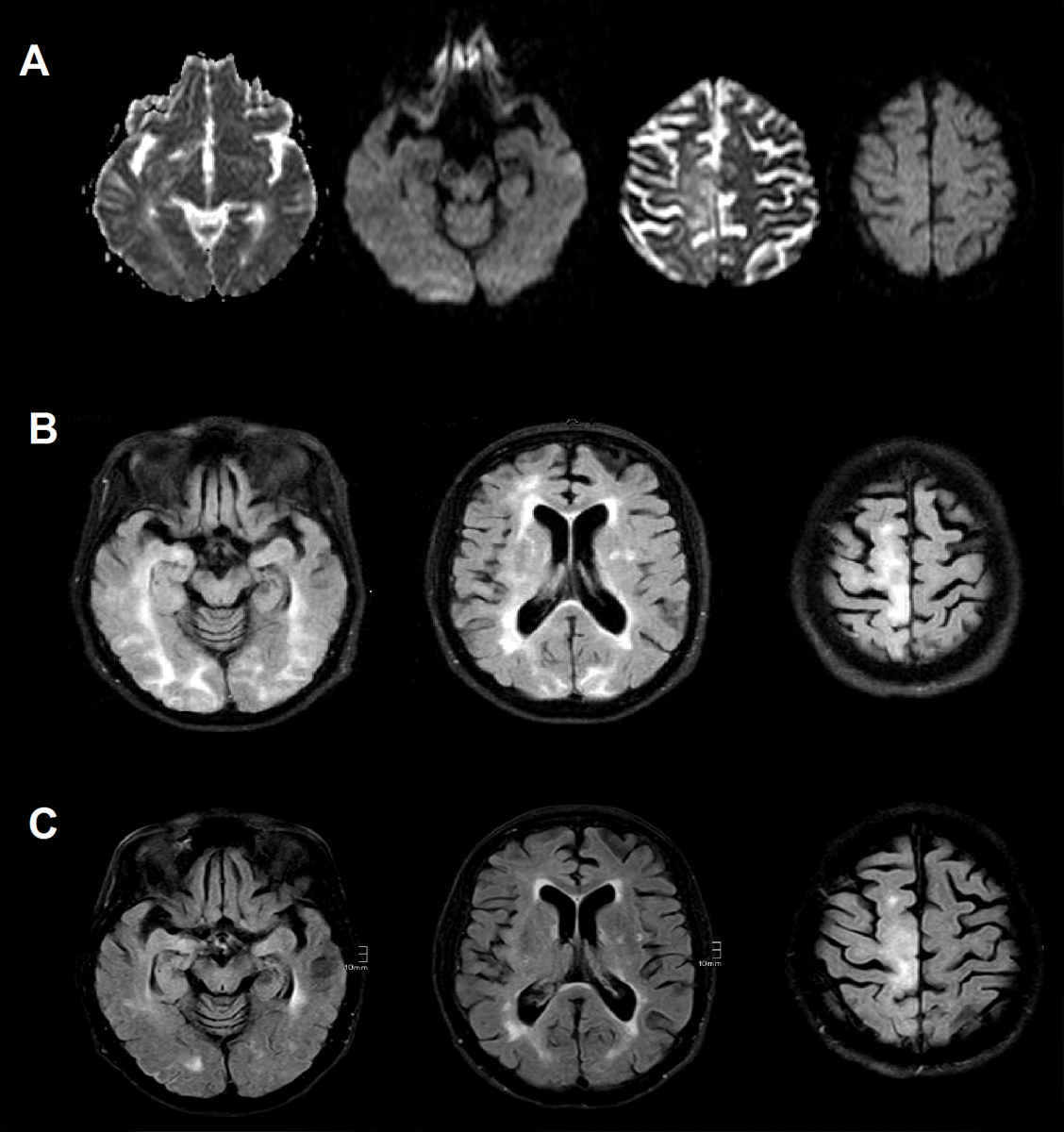 There are no comprehensible diagnostic criteria for PRES and the clinical presentation is often non-specific. The diagnosis relies mostly on typical MR findings and their disappearance over time [10]. The clinical findings and previous medical history of our patient were, in fact, hardly helpful in making a diagnosis. The radiological findings, however, were consistent with PRES. She had a bilateral cortico-subcortical pattern more prevalent in occipital lobes but also present in parietal and frontal lobes. According to literature, the lesions are typically located in occipitoparietal areas (80%), frontal lobes (68% to 82%) and lenticuloform and caudate nuclei (11.8%) [11,12]. The dwindling of lesions over time was also consistent with natural history of PRES.

As we have no other alternative diagnosis and could find no typical known precipitating factor, we are left with either an instance of a completely idiopathic PRES, or we can presume a pathogenic relationship with the severe liquor leak the patient had 3 weeks prior. The leak was assumed to have closed when liquor stopped filtering through the operative wound. However, as the patient never presented typical clinical symptoms such as nausea or postural headache, this assumption could not be clinically proven. It is worth notice that the absence of clinical symptoms does not rule out cerebral hypotension [13].

The pathological relationship between this hypothetical cerebral hypotension and PRES would be based on compensatory vein dilatation and stagnation of venous flow leading to cytotoxic edema [8]. Another possibility is that the sagging of the brain could impair the venous drainage due to functional stenosis [14], thus leading to the same result. In our case, the imaging offered no brain sagging and no other typical signs of cerebral hypotension, though the sensitivity of brain MR for diagnostic of spontaneous intracranial hypotension has been calculated at about 83% [15].

Data from individual cases suggest that intracranial hypotension may lead to PRES-like radiological patterns. Further observations are necessary to confirm this hypothesis and establish a pathological theory that would bind the two entities.