Obstructive Uropathy as a Cause of Acute Renal Failure During Labor

Citation: Polonsky A, Barbara D and Gagliardi C. (2016). Obstructive Uropathy as a Cause of Acute Renal Failure During Labor. Mathews J Case Rep 1(2): 008.

This case is extraordinary because it was never before described in English literature. The case describes a rare pathological situation during labor that is usually overlooked and can cause severe morbidity and even mortality. The importance of this case is to emphasis that even though certain occurrences are rare, they might still happen and should be immediately addressed and dealt with.

Previously called acute renal failure, acute kidney injury is now used to describe sudden kidney function impairment which includes retention of nitrogenous, other waste products and reduced urinary output [1, 2]. Acute kidney failure has become uncommon, a 6 year study from Mayo Clinic found an overall incidence of 0.4% [3]. Although acute kidney injury has become less frequent, it still occasionally causes significant obstetrical morbidity [4]. Amongst the etiologies of acute kidney injury are Preeclampsia, acute fatty liver, postpartum hemorrhage and placental abruption. Rarely, bilateral ureteral compression by a very large pregnant uterus can result in acute kidney injury and renal failure. The cases of obstruction which were described so far usually occur during pregnancy but no case so far described acute obstruction during labor. When obstruction occurs during pregnancy, various management methods are accepted [5]. These include bilateral stenting, induction of labor and even dialysis. In our case, obstructive uropathy and acute renal injury occurred during labor. Our pregnant laboring patient had no previously documented renal pathology or lab abnormality, during or before pregnancy.

23y/o Gravida 1 Para 0 with intrauterine pregnancy at 40week consisted with 12 weeks ultrasound presented to triage with complaints of worsening contractions for the past 5 hours. Patient denied any leakage of fluid or bleeding and reported good fetal movements. Patient denied any problems in pregnancy including hypertension or gestational diabetes mellitus. In triage the patient's blood pressures were noted to be 150- 140/90-80 mmHg. The patient did not have any complaints of headache, blurry vision, scotomas or epigastric pain. The patient's previous blood pressure measurements which were done during pregnancy were 120-100/80-60 mmHg. The only significant history was a normal echocardiography which was done due to grade II cardiac murmur. The fetal tracing was category I with contractions every 2 minutes. On vaginal exam, the patient was found to be 2cm dilated with 80% effacement and -2 fetal head station. The patient was admitted for labor. On admission, Central blood count and basic metabolic panel were sent and found to be within normal limits. The patients' creatinine was 0.7 mg/dl and BUN (nitrous wastage product) was 7 mg/dl. Shortly after admission, the patient received an epidural and a Foley Catheter was inserted. The patient was reexamined and was found to be 3cm dilated and 80% effaced. Four hours later, at 1pm, the patient was reexamined and was still 3cm dilated and 80% effaced. As the contractions disappeared, the patient received 1 dose of Misoprostol 50 micrograms orally for labor augmentation. The patients' urine output at that time was 70cc/h. Four hours later, at 5 pm, the patient was examined once more and found to be 5cm dilated and 80% effaced. The patient was comfortable with the epidural and contracting regularly every 3 minutes. No additional augmenting agents were used. Patient was examined again at 8pm and was still 5cm dilated and 80% effaced. At that point, Oxytocin was initiated. The urine output at that point was 40cc/h. Since admission, the patient was on a continuous ringer lactate infusion at a rate of 125cc/h. At 12am, it was noted that the patients urine output was 10cc/h. The Foley was changed and the patient received 500 cc of ringer lactate bolus. After admission the patients' blood pressures were circulated every 30 minutes never to go over 130/80. 1 hour later the urine output was 0cc/h. It was decided to perform a bed side ultrasound in order to evaluate the bladder and kidneys if possible (figure 1). 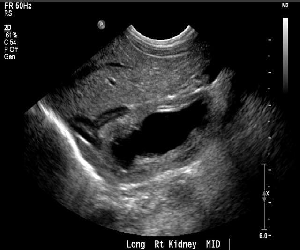 The Foley catheter balloon was visualized inside the bladder and was empty. The kidneys were significantly enlarged especially on the right side. The calyces were measured to be more that 20cm in diameter. Basic metabolic panel was sent at that time. Creatinine was 1.8 mg/dl and BUN was 11 mg/ dl. Considering the lab result and the anuric state, acute renal failure was diagnosed. At that point the patient was examined and was still 5 cm dilated and 80% effaced. It was decided to proceed with a cesarean section due to arrest of dilation and acute renal failure. During the CS, upon entering into the peritoneal cavity two elongated round dilated structures were identified running anterior to the uterus on both sides down the bladder. A viable fetus was extracted through a lower segment transverse incision. Immediately after evacuating the uterus, the bladder started filling and the Foley started draining. The Foley was additionally flushed with 10cc saline and 20 mg Furosemide was given to the patient. 6 hours after surgery, basic metabolic panel was sent again. Creatinine was trending down at 1.3 mg/dl and BUN at 11mg/dl. The patient was stable in recovery and was transferred to the postpartum floor. The next day, additional labs were drawn and the creatinine was still trending down to 1 mg/dl. Postoperatively, the urine output was within normal limits at 100cc/h. On postoperative day 2 the patient was sent for a follow up renal ultrasound which was found to be completely normal (figure 2). 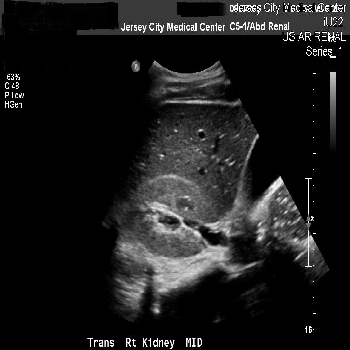 The patient recovered well and was discharged on postoperative day 3. Basic metabolic panel was again sent on discharge day. The creatinine was 0.5 mg/dl and BUN 6 mg/dl. The patient was informed about the possibility of a urinary tract malformation and was recommended to follow up with an urologist for additional diagnostic testing.

Pregnancy is a state of altered hormonal and hemodynamic milieu. The physiologic alterations may have a significant impact of kidney function, especially during pregnancy and certainly during labor. Patients, who have underlying kidney disease, should be carefully monitored during pregnancy and labor in order to achieve optimal maternal and fetal outcomes. Apart from these anticipated challenges, many other renal problems might occur during pregnancy and during labor, especially in the case of an underlying unknown malformation or anatomical variants. During pregnancy, major structural changes might be seen in the urinary system including dilation of the calyces,renal pelvic and ureters. These changes are mostly physiological and do not compromise urinary output or renal function [6]. These changes persist up to 16 weeks postpartum and should not be considered as pathologic. During pregnancy, glomerular filtration rate and renal plasma flow increases by 35%-50%. This results in lower levels of creatinine and BUN. Levels of creatinine above 0.8 mg/dl or BUN above 13 mg/ dl require further evaluation. The only statistics about acute renal failure which are published are during pregnancy and not delivery due to its rarity. During pregnancy the incidence of acute renal failure is 1/200,000 births [7]. There are various etiologies of acute renal failure during labor; Pregnancy induced hypertension and preeclampsia are responsible for 50% of acute renal failure cases during labor. Kidney injury is functional and occurs due to relative or absolute hypovolemia or acute tubular necrosis. Abruption placentae causing severe hemorrhage or disseminated intravascular coagulopathy can be a major cause of acute kidney injury and result in either bilateral cortical sclerosis or acute tubular necrosis [8]. In addition to occupying the leading role of maternal mortality, postpartum hemorrhage has one of the leading etiologic roles in acute kidney injury during labor. Acute obstructive uropathy is not an etiology which is mentioned in literature as a cause of acute kidney injury during labor. Rarely is it mentioned as an etiology of acute kidney injury during pregnancy. Nephrolithiasis, Gravid uterus, twin pregnancy and polyhydramnios are included but not limited to the possible causes of acute renal failure during pregnancy. These conditions rarely require any treatment and usually resolve after delivery. It is extremely rare for these conditions to suddenly emerge during labor and cause acute kidney injury. In the past, less than 20 cases of acute renal failure due to enlarged gravid uterus were reported. One of these cases describes a 34 weeks twin pregnancy with polyhydramnios that caused acute renal failure. In their case the creatinine reached 12.2 mg/dl. The case was resolved once amniotomy was performed [9]. In our case, amniotomy did not resolve the situation and other steps were required in order to resolve the situation. In other case descriptions, ureteral stenting resolved the bilateral obstruction recognized during pregnancy [10]. After stenting, renal functions improved significantly thus enabling pregnancy continuation without jeopardizing maternal and fetal health. This management could not be carried out in our setting secondary to the acuity and urgency of the matter. The patient had arrested for several hours, anuric and with elevated creatinine levels; evacuation of the gravid uterus via cesarean section was the only management available at that time. Reports of obstructive uropathy during labor were not found in our literature search. Presumptive etiology in this case was bilateral ureteral compression by the fetal head. It is possible that ureteral malformation was also involved considering the two dilated structures visualized during surgery traveling anterior to the uterus (most likely bilateral ureters running anterior to the lower uterine segment). Therapeutic course taken at the time resulted in complete resolution of symptomatology and laboratory abnormalities. Even though obstructive uropathy during labor is extremely rare and is rarely described in literature, from this case we can deduct that the situation is possible and should be addressed immediately to prevent morbidity and mortality.