Primary cardiac myxomas occur frequently in the left atrium, but they can be found in any cardiac chamber. Most tumors are solitary, and multiple intracardiac myxomas account for less than 5% of all cases of myxoma. Moreover, valvular myxomas are exceedingly rarer. Therefore, we report unusual myxomas with an unique anatomical location, which emphasizes the value of multiple imaging investigations in the diagnostic workups and subsequent management.

Cardiac myxomas are the most frequent cardiac tumors, accounting for 50% of cases. Unusual aspects of cardiac myxomas can include rare clinical presentations, special patient populations, unusual locations, and special pathology [1]. Mitral valve myxoma is defined as a myxoma arising from the mitral leaflet, annulus, commissure, junction area or subvalvular apparatus (chorda or papillary muscle) with a stalk or presenting as a broad-based one. Patients with cardiac myxoma may have a variety of clinical scenarios on a case-to-case basis. Cardiac obstructive symptoms, embolic events and constitutional symptoms are the most frequent clinical manifestations [2]. Although histologically benign, in some cases myxomas may be lethal, due to impairment of cardiac dynamics and their thromboembolic potential. A better understanding of imaging findings of cardiac myxomas would be helpful to improve timely prognosis. Echocardiography, as the initial imaging modality for the evaluation of cardiac masses, is widely used in cardiovascular practice. Since their introduction, multi-slice CT (MSCT) imaging and MRI provide a great incremental value for the diagnosis of cardiac myxomas [3]. Here, unusual myxomas with an unique anatomical location at mitral leaflet are presented, which emphasizes the value of multiple imaging investigations in the diagnostic workups and subsequent management.

A 58-year-old male was referred to our institution for further evaluations in a context of sudden syncope from unknown cause two months before. He had a 40-year history of cigarette-smoking and alcohol consumption. His initial vital signs were documented as normal range. No jugular venous distention or lower extremity edema was noted. Grade 3/6 systolic murmurs at the cardiac apex were heard on auscultation. The syncope work-up including head MSCT, carotid Doppler, electroencephalogram, electrocardiogram, and orthostatic blood pressure were all negative. Transthoracic echocardiography showed several uniform hyper echogenic masses adhered to the anterior and posterior leaflets of the mitral valve (Figure 1a), which rendered obvious mobility and some deformability following the cardiac cycle. The neoplasms measured 20 × 13 mm and 21 × 12 mm respectively. Colour Doppler flow imaging (CDFI) displayed slight-to-moderate regurgitation signal at the mitral orifice (Figure 1b). Cardiac MSCT angiography showed a lobulated filling defect in the left atrium and ventricle, closely contacting with the mitral valve annulus and mitral leaf lets (Figure 2a and 2b). Neoplasm was more likely to originate from the mitral valvular region and crossed the left cardiac chamber. Given the highly mobile nature of this mass and the incidence of embolic phenomena, cardiac MRI with contrast administration was conducted as a prelude to surgical intervention. The MRI scan showed the presence of multiple masses attached to the anterior and posterior mitral valve leaﬂets. On cine black blood steady-state free precession imaging, the mass was noted to be of high intensity (Figure 3a). The neoplasms remained in the left atrium during systole, and prolapsed freely into the left ventricle during diastole (Figure 3b and 3c). On early Gadolinium-enhanced images, the mass was hypointense. Mild patchy enhancement was observed on late Gadolinium (Figure 3d). According to imaging findings above, multiple myxomas of the mitral valve were preoperatively proposed. 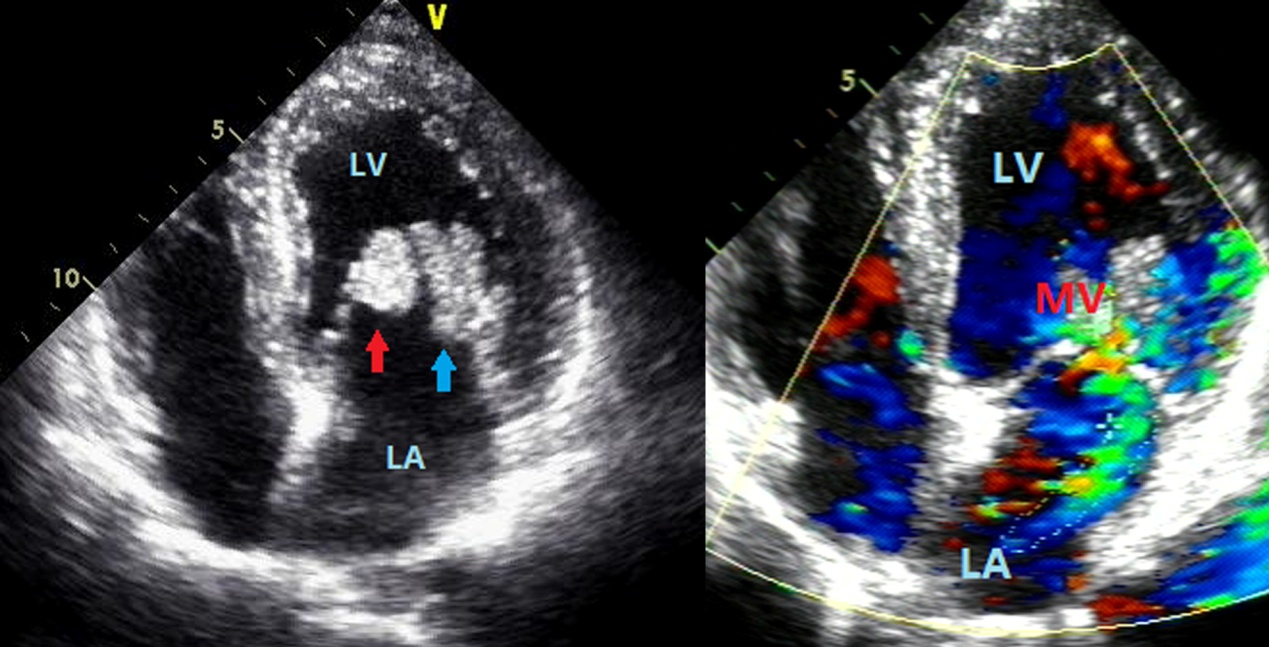 Figure 1: The diastolic period of apical four-chamber view indicated two tumors adherent to the anterior and posterior mitral valves. CDFI revealed a slight-to-moderate regurgitation signal at the mitral valve during the systolic period. 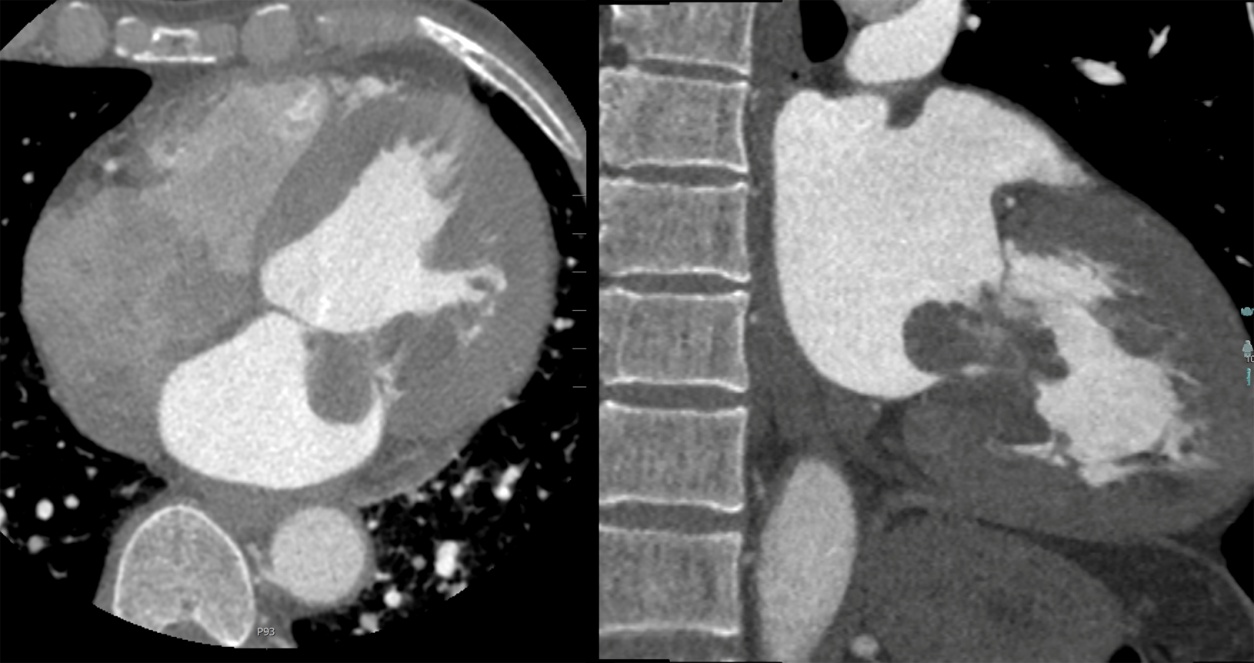 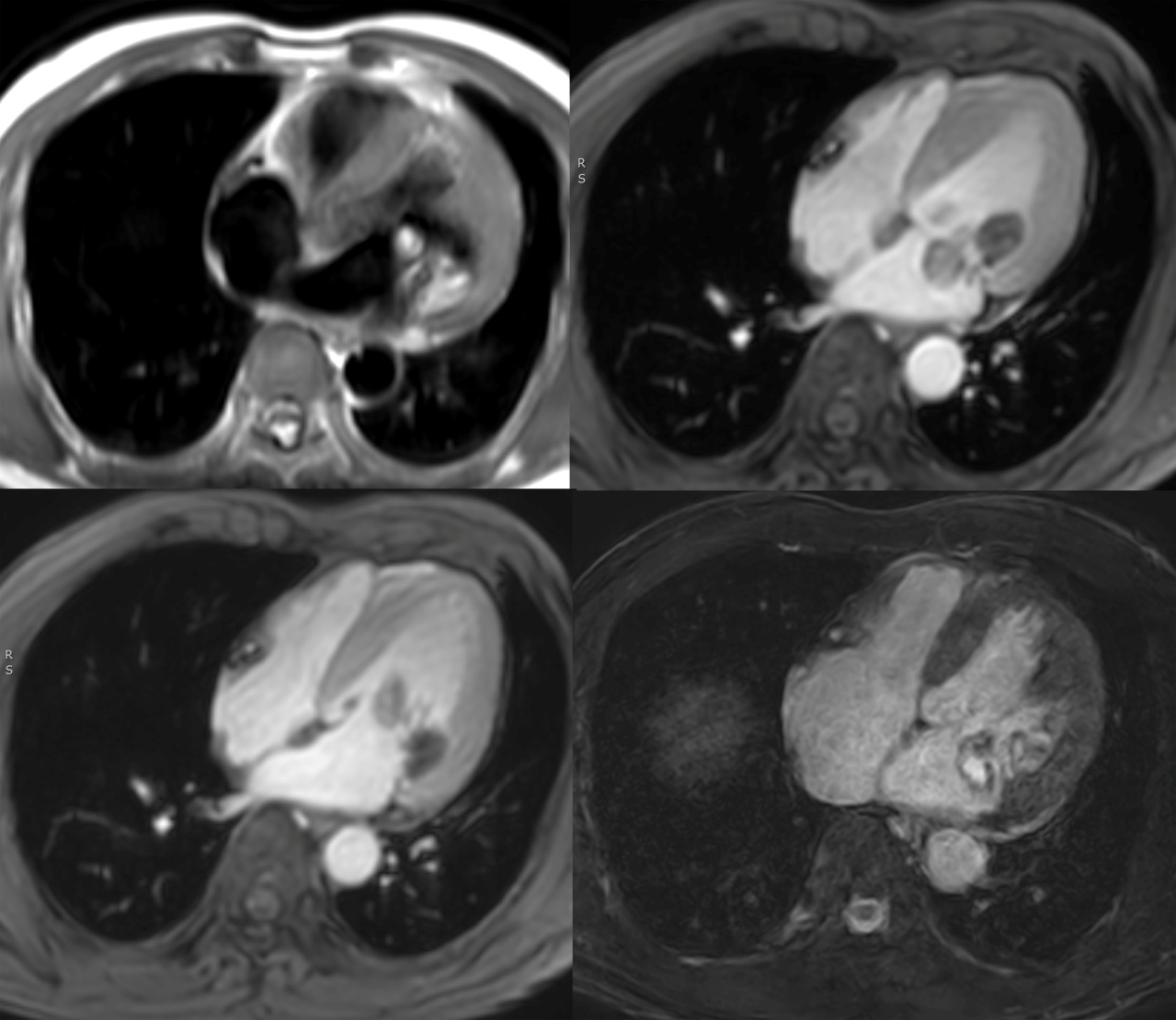 Figure 3B & 3C: One of neoplasms remained in the left atrium during systole, and prolapsed freely into the left ventricle during diastole.

Following multidisciplinary team decision, the patient underwent open cardiac surgery for neoplasm excision under general anesthesia and cardiopulmonary bypass. Intraoperative exploration revealed multiple myxoid tumors attached to the mitral annulus, valve leaflets and tendinous cords, suited at the left atrium and the left ventricle. Visually, no thrombus was seen on the mass surface. Because of neoplasm involving the mitral valve leaflets, the part of mitral annulus, and tendinous cords, mitral valve replacement was required and Sorin Bicarbon mechanical valve replacement was implanted. On macroscopic examination, cardiac myxomas assumed multiple polypoid forms with translucent surface (Figure 4a). Histopathological examination of the tumour revealed myxoma (Figure 4b). After surgery, the patient began to take heparin and warfarin concurrently so as to achieve an optimal result. Postoperative period was uneventful and the patient was discharged home during the tenth day post-surgery. There were no signs of recurrence at the 12 month follow-up transthoracic echocardiography, and the function of artificial valve was also good. 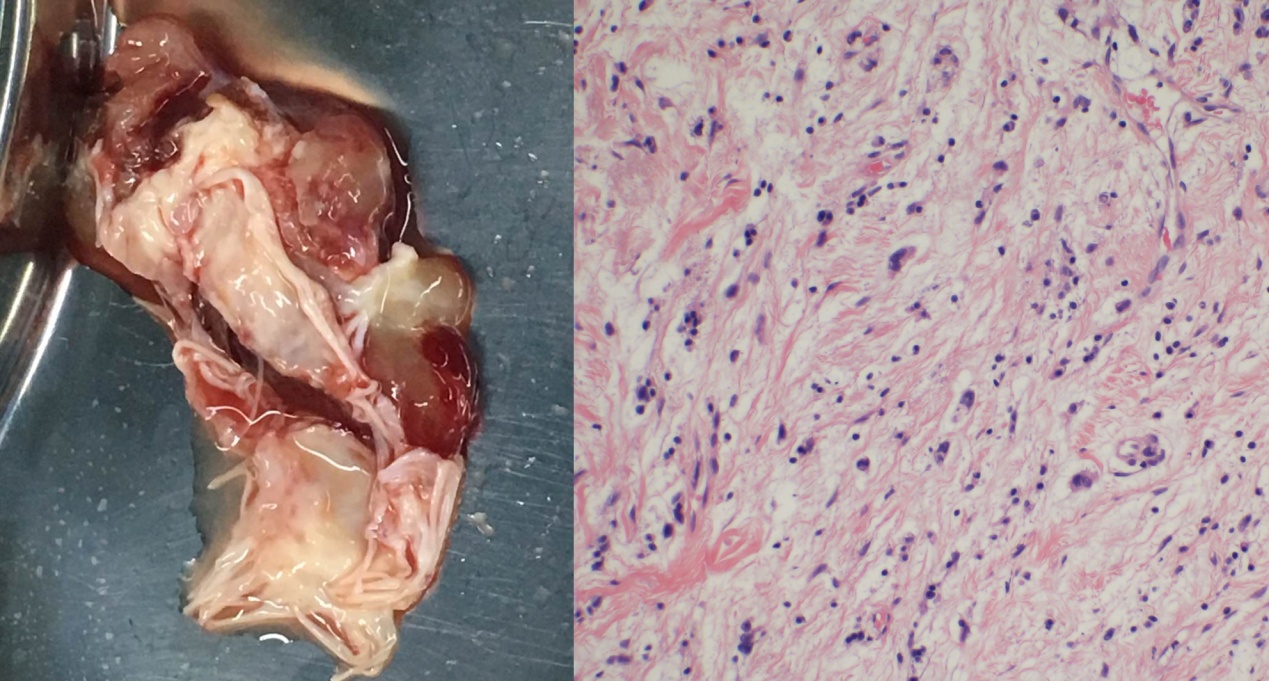 Figure 4A & 4B: Gross specimen appeared brown, soft, translucent and greasy, which were attached to the mitral valve. Histopathology indicated myxoid matrix with myxoma cells (HE staining, × 200 magnification).

Primary cardiac tumors are a rare disorder with the incidence from 0.001% to 0.3% by autopsy, and the majority of them are myxomas accounting for 50% of cases. Primary cardiac myxomas are thought to develop from primitive endothelial or subendocardial cells or from multipotential mesenchymal cells [4]. Myxoma occurs frequently in the left atrium, but it can be found in any cardiac chamber. Most tumors are solitary, and multiple intracardiac myxomas account for less than 5% of all cases of myxoma. Moreover, valvular myxomas are exceedingly rarer [5]. The myxoma in our patient simultaneously involved the anterior and posterior leaflets and chordae tendineae of mitral valve, which is rarely reported in the literature. Patients with cardiac myxoma may present with a variety of clinical scenarios on a case-to-case basis such as syncope, systemic or pulmonary embolization, rheumatic heart disease, disseminated malignant disease, and infective endocarditis. Of all these symptoms, syncope is one of the most ominous prognostic indicators, which carries a higher incidence of sudden death. Those individuals presenting with syncope probably result from impediment to blood flow, as described in our patient. In a related study evaluating the risk factors for embolism in cardiac myxoma, location of the myxoma and irregular tumor surface are independently associated with increased risk of embolic complications [6]. Embolic events-due to detached tumor tissue, disseminated thrombotic material overlying the tumor, or a compound of both-have been shown to occur in up to 30% to 50% of patients [7]. Luckily, obvious embolic event was not found in our case. Just because these related symptoms are often nonspecific in most patients, delayed diagnosis or unexpected poor prognosis is often encountered.

Transthoracic echocardiography, as the most widely used imaging modality for the evaluation of cardiac masses, can determine distribution, size, surface mobility, and attached points of the tumor, relation with neighboring structures, hemodynamic status concerning valvular function. In addition, contrast echocardiography is further useful to differentiate between cardiac tumor and thrombus. It was regretful that this technique was unavailable in this case. Current cardiac MSCT scan is useful for the assessment of calcification and fat content within a mass, and is beneficial to define small lesions with better resolution. However, the principal limitation of CT is the lack of soft-tissue contrast resolution except for radiation exposure and contrast-induced toxicity. Cardiac MRI can excellently determine tumor size, location, adjacent structures. Meanwhile, analysis of T1 and T2 signal can help to determine the composition of the mass. Use of contrast can evaluate the presence of cardiac thrombus versus a tumor and cardiac or valvular function. A particular advantage of cardiac MRI is its ability to distinguish a thrombus from a tumor by providing more reliable tissue characterization, and also better at assessing the relationship of a mass to cardiac structures [8,9]. Although technologically advanced diagnostic examinations are becoming increasingly available, noninvasive ultrasound examination remains to be indispensable. Besides the characteristics of a tumor, a preoperative imaging assessment of cardiac tumors using cardiac multi-slice CT and MRI might help determine resectability of a tumor and allow planning for reconstruction of the cardiac chambers or valves, as described in our patient.

Once diagnosed, cardiac myxoma requires timely surgical en bloc resection to avoid deterioration resulting from potential embolic event or obstruction. Regarding management of the mitral valve myxoma, a radical excision of the mass and valve replacement may be current standard of care. Most valves are reconstructed, leaving valve replacement for cases of large tumors with significant defects, ventricular side tumors, and myxomas involving both leaflets [2]. Due to the fact that myxomas can recur, regular postoperative surveillance is mandatory [10]. Replacement of the mitral valve in our patient was appropriate based on the extensive involvement of mitral valve. This treatment plan resulted in an excellent medical outcome at the regular follow-up of echocardiography.