1Department of Oncology and Radiotherapy, Medical University of Gdańsk, Poland

Thymic epithelial tumors (TETs), including thymoma and thymic carcinoma, are rare and clinically heterogenous group of neoplasms. Surgery remains the cornerstone of therapy for early-stage TETs. In advanced or recurrent, unresectable TETs chemotherapy is a standard of care. Platinum-containing chemotherapy is the most common, also used in neoadjuvant setting. There is no standard secondline treatment for TETs after chemotherapy failure. We present a case of 39-year-old woman with recurrent unresectable thymoma type B2 located in the thorax, with positive somatostatin receptor scintigraphy, who was treated with somatostatin analogue without prednisolone for 94 months. She underwent prior neoadjuvant chemotherapy, non-radical surgery (R2) with adjuvant irradiation, and salvage chemotherapy. She started long-acting, intramuscular octreotide at the initial dose of 20 mg and continued 30 mg every month since april 2011. Steroids were withheld due to patient’s obesity. Complete radiological remission under octreotide treatment was achieved and it has been continuing till now. The tolerance of octreotide is good. Our case is the longest reported with complete remission achieved with octreotide in thymoma. Somatostatin analogues may represent a valuable treatment option for advanced/recurrent refractory thymoma tumors showing an increased uptake at octreoscan.

Thymic epithelial tumors (TETs) are uncommon neoplasms, that consist almost half of anterior mediastinal masses reported in adults. TETs represent a wide range of clinical, histological and molecular entities [1]. Approximately half of patients presents paraneoplastic syndromes. According to the WHO 2004 histological classification thymic tumors include five types of thymoma (A, AB, B1, B2 and B3) and thymic carcinoma (TC). Masaoka-staging system and WHO subtype are the most significant prognostic factors for TETs. Three prognostic groups of thymomas include: A/AB/B1, B2 and B3. Surgical resection remains the cornerstone of therapy for earlystage TETs. Chemotherapy represents the standard of care for metastatic or inoperable refractory/recurrent disease, and have been applied as induction therapy for initially unresectable disease (Masaoka Stages III or IV-a). Recently, the effectiveness of neoadjuvant chemoradiotherapy with or without platinum was reported [2]. TETs are chemotherapy-sensitive, an average of two thirds of patients showing an objective response rate (ORR). Platinum-containing regimens remain the standard of care in both palliative and neoadjuvant setting. There is no standard treatment after chemotherapy failure. We present a patient with thymoma after prior induction and salvage platinumbased chemotherapy, who achieved complete remission (CR) for 94 months under treatment with somatostatin analogue without prednisolone. 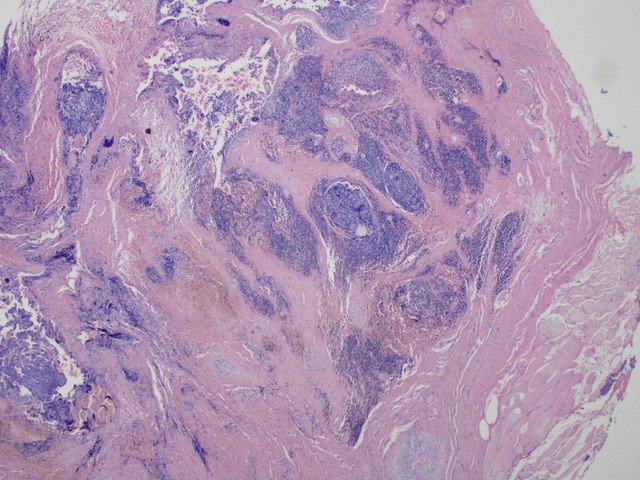 Figure 1B: The histology of recurrent thymoma (200x), the neoplastic component consists of prominent large epithelial cells with elongated shape. They present vesicular nuclei and are admixed with not numerous small lymphocytes. Immunohistochemistry of the primary tumor samples, demonstrated positivity for CKAE1/AE3 and EMA, and no staining for CD5, CK14, HMB45, VIM, and collagen IV. Moreover, a high content of CD3+, CD5+, CD20-, CD30- lymphocytes with high MIB1 index was found.

A 39-year-old female who complained of chest pain, fever and dyspnoea, was diagnosed through left parasternal mediastinotomy with type B2 thymoma in March 2008. Beside psoriasis, she had no significant previous medical history, as well as no family genetic and cancer history. Her Eastern Cooperative Oncology Group (ECOG) performance status was 1. A routine blood test was normal. On computed tomography (CT) scans of the chest an anterior mediastinal mass measuring 140 × 110 × 120 mm was diagnosed. It infiltrated surrounding structures, i.e. aortic arch, trunk of the pulmonary artery and pericardium (Masaoka Stage III). She underwent six cycles of neoadjuvant chemotherapy consisting of cyclophosfamid (500 mg/m2 ), doxorubicin (50 mg/m2 ) and cisplatin (50 mg/ m2 ) on day 1 every 3 weeks (CAP regimen), with a good partial response (PR). Thymectomy with incomplete resection (R2) was performed in February 2009, fallowed by adjuvant radiotherapy (60 Gy/30 fractions). Postoperative pathological analysis confirmed former diagnosis (Figure 1A and 1B). In February 2010 local tumor recurrence, as a mass of 74 × 64 × 45 mm was identified by CT. She had refused chemotherapy until the disease progressed with pleural involvement. The tumor on the pleural right side was 71 × 42 mm. Salvage chemotherapy of 4 cycles TC combination (paclitaxel 175 mg/ m2 plus carboplatin 400 mg/m2 , every 3 weeks), resulted in local progression. At that moment, octreoscan (Tc-99m HYNICTOC, 870 Mbq) was performed and an increased uptake of octreotide (Krenning 2/3) in the mediastinum and in the thorax was shown. In April 2011 she started long-acting octreotide administered by intramuscular injection at the initial dose of 20 mg and continued 30 mg every one month. Prednisolone was omitted due to the patient’s body mass index exceeding 39. The CR was achieved after 4 cycles, and confirmed by repeating chest CT until now. In 2013 transiently elevated liver functions parameters (transaminases AST, ALT grade 3) were observed. Ultrasound examination demonstrated toxic liver damage. Viral hepatitis was excluded. Mild elevation of transaminases (Grade 1) occurred periodically. CT showed splenomegaly, and postirradiation lung fibrosis. In 2013 she was diagnosed with obstructive pulmonary disease. In 2015, she had worsening of exercise tolerance with effort dyspnoea, and associated decreased ejection fraction to 32%. Coronary angiography was normal. After introduction of bisoprolol and ramipryl, gradual improvements of physical performance and ejection fraction to 40% was observed. Since 2017 grade 1 trombocytopenia is being observed. There were no changes in bone marrow trepanobiopsy performed in october 2018. Overall, she remains in good condition.

Owing to the disease rarity, data on the efficacy of systemic therapies including chemotherapy in TETs are limited, and include no randomized trial. Our patient received CAP as induction therapy, and TC as salvage treatment. The three-drug CAP regimen was assessed among 29 patients with thymomas enrolled into phase II trial [3], and has long been considered as standard first-line chemotherapy for TETs. Clinical benefit of carboplatin (AUC 6) plus paclitaxel (225 mg/m2 ) administered every 3 weeks for thymoma patients was demonstrated in another trial [4]. TC doublet failed to demonstrate the efficacy in our case.

Somatostatin receptors (SRRs) have been detected in both normal and various tumor tissues including TETs. Imaging of SSR expression by using the radiolabeled somatostatin analogue octreotide is a diagnostic tool to assess malignant thymic masses. Somatostatin analogues for TETs have been evaluated in two phase II trials [5,6]. Most patients in these trials had metastatic disease and had undergone prior surgery, radiation therapy, or chemotherapy. Palmieri et al. [6] enrolled 16 patients (13 with thymomas) with advanced or recurrent tumors, which had progressed following conventional palliative chemotherapy. With subcutaneous octreotide (1.5 mg daily) and prednisolone (0.6 mg/kg/day orally for 3 months, than 0.2 mg/kg/day), the ORR of 37% and one (6%) CR, and the median time to progression and survival of 14 months and 15 months, respectively, were observed. Aimed by understanding single-agent octreotide’s activity and its toxicity, the ECOG performed a prospective study treating 38 patients (32 with thymomas) with subcutaneous octreotide (1.5 mg daily) from the beginning [5]. Patients with a CR or PR after two cycles (one mounth of therapy consists one cycle), continued to receive octreotide alone; in patients with disease stabilization prednisolone was added. The ORR was 30.3%, indeed only 10.5% ORR was observed for patients treated with octreotide alone. At present the detailed mechanism of the octreotide anti-tumor effect against thymomas is not fully understood, especially the activity of octreotide versus prednisone remains to be clarified. It has been reported that somatostatin has antiproliferative activity associated with growth factors inhibition, such as insulin-like growth factor-1 and epidermal growth factor, activation of immunity and tumor vessel angiogenesis inhibition. Recently, octreotide Long-Acting Release (LAR) (intramuscular injections of 30 mg/every two weeks) plus prednisolone (0.6 mg/kg/day), for a maximum of 24 weeks, has been evaluated as neoadjuvant treatment in patients with positive octreotide scans in a phase II study [7]. Among 17 patients with primarily unresectable or advanced locally recurrent thymoma (15 cases) or TC, the ORR after 3 months of treatment was 88%, and overall operability after 6 months of treatment was 52%. Notably, an objective response to octreotide may be observed later, and two months of octreotide monotherapy may not be sufficient for response [5]. Successful somatostatin analogue therapy has been observed in reported cases of advanced, heavily pretreated, and unresectable thymoma, in which treatment with octreotide and prednisolone resulted in complete remission or tumor size reduction [8,9].

The long-term therapy with sandostatin analogue in our case is tolerated well. Overall, the tolerance of these drugs is good. The reported adverse events associated with octreotide are most common hematological and gastrointestinal, and grade 1 or 2. However, fatal pneumonia, probably caused by thymomaassociated immunodeficiency during steroid medication not to octreotide LAR was reported [7].

Recently, molecular targets are being developed for TETs [10]. Summarizing, octreotide may provide long-term CR in thymomas showing an increased uptake at octreoscan.

9. Pettit L and El-Modir A. (2011). The role of somatostatin analogues in the treatment of advanced malignant thymomas: case report and review of the literature. Br J Radiol. 84(997): e7-10.