In the pediatric population, the risk of developing an infectious endocarditis following the percutaneous closure of an atrial septal defect (ASD) is extremely rare. We report the case of a 10-year-old child who developed an infectious endocarditis nineteen months after closure with an Amplatzer septal occluder without residual shunt. The patient was treated with triple antibiotic regimen successfully, avoiding device removal. Trans-esophageal color Doppler suggested lack of endothelialization of the device, the most commonly described finding on extracted devices following an infective endocarditis. Proper assessment of the endothelialization process of septal occlusion devices is needed for individualized endocrditis prophylaxis.

Atrial septal defects are the second most common congenital heart malformations, following ventricular septal defects, with an incidence rate of 5%  to 10% [1]. Ostium secundum type atrial septal defect (ASD) account for 80% of these cases. Only this type of ASD can be repaired by a septal occluder to avoid open heart surgery. Indications for intervention include right ventricular dysfunction due to volume overload, significant shunting with a Qp:Qs ratio >1.5:1, pulmonary arterial hypertension, supraventricular arrhythmias and decreased functional capacity [2]. Bacterial endocarditis is an infection of the endocardium often associated with a cardiac predisposition. Based on large population studies, the incidence of infective endocarditis in patients with ASD closure with a septal occluder is 0% to 2% [3]. According to the American Heart Association (AHA) guidelines published in 2007, antibiotic prophylaxis for bacterial endocarditis is indicated in patients in whom such an infection represents a high risk of morbidity and mortality. There are 4 categories of high-risk patients: prosthetic heart valves, history of bacterial endocarditis, developed valvulopathy on a transplanted heart, and congenital heart defects. In the latter category, only unrepaired cyanotic congenital heart defects, congenital heart defects repaired within the last 6 months and congenital heart defects repaired with a residual defect at the site or adjacent to the  prosthetic material require antibiotic prophylaxis for bacterial endocarditis [4].

Nineteen months after the procedure, the patient consulted the emergency room with persistent fever, arthralgias and abdominal pain. Blood cultures were positive for Staphylococcus aureus. The first transthoracic echocardiogram (TTE) was realized on her first day on the ward and failed to identify cardiac vegetations. On the second day, TEE revealed the presence of hypermobile filamentous echodensities (14 mm and 5 mm long) attached to the postero-superior portion of the left side of the device representing one or more vegetations (video clip 1, additional material), and color flow between the device and the atrial septum, suggestive of insufficient or absence of endothelialization (video clip 2, additional material). The base of these vegetations had an organized appearance with a clear center suggesting a possible abscess. Directly after the TEE, the patient presented a tonic seizure of all four limbs. The computed tomography did not show any cerebral abscess or infarction. However, it showed two hypodense lesions, one in the right kidney and one in the spleen, considered to be septic emboli. The latter findings were corroborated with abdominal ultrasound. 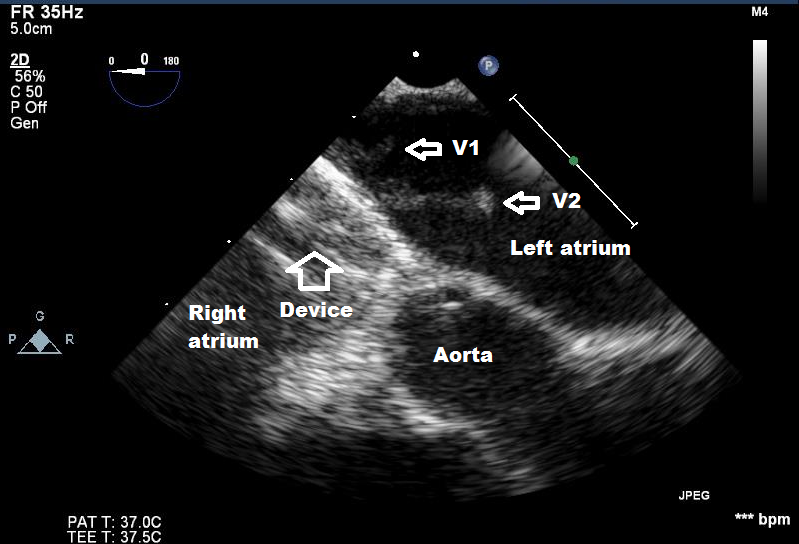 The patient was treated with triple antibiotic regimen: cloxacillin (41 days, 200 mg/kg/day), tobramycin (14 days, 7.5 mg/kg/day) and rifampicin per os (40 days, 20 mg/kg/day). Negative hemocultures were obtained one day after initiation of the treatment and remained negative afterwards. After one week of treatment, a control TEE demonstrated the disappearance of the vegetation. Although the scan did not document embolization of the vegetation to the brain, the early disappearance of the vegetation may have well been the cause of the seizure that occurred following the first TEE. With this course of events, it was decided that there was no indication to remove the septal occluder. At one year follow-up, the patient continued to evolve well with no further concerns.

Percutaneous catheter closure of an ASD has replaced open-heart surgery as the therapy of choice. The superiority of percutaneous approach on morbidity, mortality, cost and length of hospital stay has been demonstrated [5,6]. Possible consequences of catheter intervention include embolization and malposition of the device, cardiac wall erosion, cardiac perforation, tamponade, arrhythmias, thromboembolism and infective endocarditis [7,8]. Serious complications are rare and occur in less than 1% of patients [9].

An endocarditis that develops rapidly after an intervention may be due to bacterial inoculation during the procedure. Late endocarditis is often secondary to hematogenous dissemination from another infectious site [8]. According to the AHA, the majority of bacterial endocarditis is secondary to transient bacteremia during daily life activities and not following a dental, gastrointestinal or urinary procedure. Bacterial prophylaxis probably prevents a small number of cases resulting from these medical procedures, but even if the prophylaxis was completely effective, only a small part of these cases would be prevented. The prevention of bacteremia by adopting adequate dental hygiene is probably more effective than antibiotic prophylaxis. Moreover, the growing emergence of bacterial resistance to antibiotics may exceed the benefits of this practice [4].

In a 2016 literature review by Amedro et al., 21 cases of bacterial endocarditis were reported after an ASD device closure [10]. Seven of the 21 cases occurred in the pediatric population. All patients were treated with an antibiotic regimen for at least six weeks. In 18 of the 21 cases, the infected device was removed, often after 2 to 3 weeks of intravenous antibiotic therapy. Endothelialization of the device was noted as absent or incomplete in 8 cases, complete in 3 cases and unspecified in 10 cases. Ten of the 21 cases had a vegetation in the left atrium only, 1 case in the right atrium only, 6 in both atria and unspecified in 4 cases. Seven of the 21 cases occurred within six months of the intervention, 5 cases between the 6-24 months after the intervention, 7 cases 2 years after the closure.  A residual shunt was specifically reported in one case only, in which case the endocarditis developed within two weeks of the intervention [10].

Several studies suggest that the exposure of metal coils due to a lack of endothelialization favors the deposition of fibrin strands, which promotes the formation of a thrombus and therefore the possibility of developing endocarditis [7,8,11-13]. However, in 3 of the 21 cases reviewed by Amedro et al., the septal occluder was fully endothelialized [10]. One can speculate that the lack of endothelialization is only a co-factor in the development of endocarditis. It is also speculated that the incidence of incomplete endothelialization of device is low otherwise there would be a higher rate of bacterial endocarditis [12]. If the endothelialization of the metallic frame of the ASO is essential to reduce the risk of local infection, the GORE-Helex Septal Occluder (W.L. Gore & Associates, Inc., Flagstaff, AZ, USA) is composed of expanded polytetrafluoroethylene patch material with hydrophilic coating, supported by a super elastic frame made from nitinol. Unlike in the ASO, the nitinol wire in the GORE ® devices is entirely covered, thus not exposed to blood. While this might explain in part why there are only two cases reported with infective endocarditis over an implanted GORE device [14], one should keep in mind the unbalanced market distribution, overwhelmingly dominated by the Amplatzer devices (over 234,000 devices sold worldwide as of the first quarter of 2013, according to FDA reporting) compared to the GORE devices (a few thousands by the end of 2011).

Several studies reported a complete endothelization of the device within six months of implantation [10,11,15]. Accordingly, the duration of antibiotic prophylaxis and antiplatelet therapy following a transcatheter closure was set at 6 months. However, there is no actual and practical method that allows to unequivocally confirming the progression of the endothelialization process [11]. An autopsy case reported absence of endothelialization of the metal surface 5 months after the device implantation, despite the fact that the ASD appeared to be completely closed on the TTE [11]. We consider the persistent Doppler flow between the device and the atrial septum in our patient a very likely indication of insufficient endothelization of the device.

There are different devices available on the market, with efforts to reduce migraine headaches that are thought to be triggered by sensibility to nickel [16]. The Amplatzer Septal Occluder (ASO, Abbott, St. Paul, Minnesota) was the first one to be approved by the United States Food and Drug Administration in 2001 for the closure of secundum ASD [9]. It remains today one of the most used device for this type of intervention [12]. It uses the shape memory alloy of nitinol and polyester patches to promote the occlusion of the defect and eventual endothelization. The polyester also triggers the deposition of fibrin and platelets, which increases the susceptibility of infection [7]. Two other devices are now available, also made of two discs composed of uncovered nitinol alloy and polyester patches [13]. The Occlutech Figulla prosthesis (FSO, Jena, Germany) is coated with titanium and has a lower metal charge, designed to decrease the nickel toxicity and thrombogenicity and to promote neoendothelialization [13]. The Lifetech prosthesis (Lifetech Scientific Corporation, China) has a ceramic coating which is associated with lower thrombus formation, promotion of endothelialization and lower nickel hypersensitivity. Few studies note a favorable evolution at 1 year for this last device [2]. The most notable difference between these two latter devices and the ASO is the absence of nub in the center of the left disc. It is meant to decrease the likelihood of thrombus formation at this specific site and to promote neoendothelialization of the device. This may partly explain why the majority of thrombi are formed in the left atrium in patients with an ASO [13]. A study conducted by Sahin et al., attempted to compare the endothelialization of these three devices in vivo. No statistically significant difference was noted at 1 month follow-up concerning the neoendothelialization of the device based on inflammatory serum markers. The follow-up time was perhaps too short to actually demonstrate the lower risk of thrombus formation of these new devices [13]. According to other studies, no statistically significant difference was noted between the FSO and the ASO concerning the complications and efficacy in the pediatric and adult population. There is therefore no difference in the incidence of cardiac erosion, thrombus formation, and symptoms of nickel toxicity [5,17].

This is one of the rare cases of infective endocarditis in a pediatric patient on an Amplatzer septal occluder. In this case, there was no residual shunt and antibiotic prophylaxis was therefore not indicated. Yet, a documented endocarditis occurred at the edge of the left side of the device more than one year after implantation. Trans-esophageal color Doppler suggests lack of endothelialization in our case, the most commonly described finding on extracted devices following an infective endocarditis. Combined with previous data, our case raises the need for proper evaluation of the endothelialization process following device implantation for the appropriate management of patients who are at risk. Our case also suggests that there might be a benefit from a prolonged antibiotic prophylaxis of bacterial endocarditis whenever insufficient endothelialization of the device is suspected.

Acknowledgements: No conflicts of interest to declare. No funding received or required.

Compliance with Ethical Standards: This work was approved by the Institutional Professional Services Director as governed by provincial laws.