Hydranencephaly is an isolated rare congenital brain anomaly in which the greater parts of the cerebral hemispheres are replaced by cerebrospinal fluid (CSF). Bilateral occlusion of the internal carotid arteries mostly in the supraclinoid level in utero is a potential etiology.
Clinical features include intact brainstem reflexes without evidence of higher cortical activity. Infants with this condition are normal at birth; however, after a few weeks, they usually become irritable and have increased muscle tone and, after a few months of life, seizures and hydrocephalus (excessive accumulation of CSF in the brain) may develop. Other symptoms are growth retardation, impaired vision, deafness and spastic paralysis. Due to the late onset of most symptoms and signs, the diagnosis may be delayed.
The prognosis of hydranencephaly is poor; many of these patients die during their first year. This report presents a case of hydranencephaly diagnosed in an 8-month-old baby.

Hydranencephaly is a rare abnormality of the brain occurring in 1/10,000 births all around the world [1, 2].
It is thought to be arising from vascular insult involving the internal carotid artery after development of brain and ventricles occurs, usually in 2nd trimester of pregnancy; therefore, posterior circulation is intact [1-3]. This results in cortical destruction (most of the cerebral cortex is absent) and forms a large cerebrospinal fluid (CSF) space anteriorly involving the frontal and temporal lobes and intact areas in the posterior circulation, namely preserved thalami [1-4]. The third ventricle is normal, and the falx is seen in the midline [2]. The fetal head circumference would be expected to be normal [2].
Toxoplasmosis and viral infections may cause this abnormality [2]. Toxic exposures and cocaine abuse have been reported, and described in rare syndromes [2]. In monochorionic twin pregnancies, death of one twin in the second trimester may cause a vascular exchange to the living twin through the placental circulation, leading to hydranencephaly in the surviving fetus [2, 7].
This work reports a case of diagnosis of hydranencephaly.

An eight months female patient was referred for brain computed tomography (CT)-scan to radiology department. She had seizure and gradual enlargement of the head since birth.

CT scan in the patient demonstrated an intact falx with huge fluid density in the supratentorial level associated with separate thalami that suggested the diagnosis of hydranencephaly [Figures 1 and 2]. Presence of the posterior fossa structures but the absence of the cerebral hemispheres confirms that the posterior circulation is of normal limit [Figure 3]. 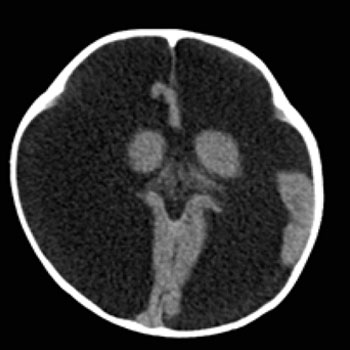 Figure 1: Axial image of brain CT-scan showing an intact falx with huge fluid density in the supratentorial level associated with separate thalami that suggested the diagnosis of hydranencephaly. 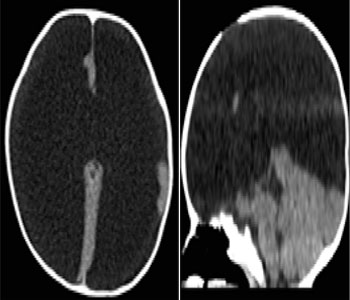 Figures 2A and 2B: Axial (A) and sagittal (B) images demonstrate a complete absence of the cerebral hemispheres, with a small amount of occipital cortex remaining. The absence of a circumferential rim of residual cerebral hemispheric tissue eliminates hydrocephalus as a diagnostic consideration. Posterior fossa structures are intact confirming that posterior circulation is intact. 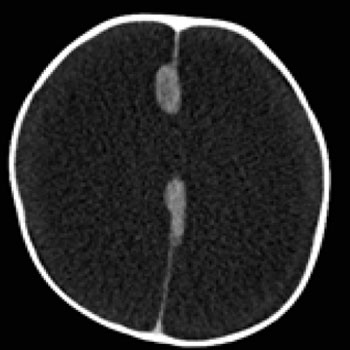 Hydranencephaly is a congenital brain anomaly due to vascular insult and resulting in a CSF filled parenchymal cavity which has not communicate with the subarachnoid space [3]. Posterior fossa structures are preserved because the posterior circulation is intact [2, 3, 4].

The infant's head size and spontaneous reflexes such as sucking, swallowing, crying, and moving the arms and legs may all seem normal, depending on the severity of the condition. However, after a few weeks, the infant usually becomes irritable and has increased muscle tone (hypertonia) [3]. After several months of life, seizures and hydrocephalus may develop [3]. Diagnosis may be delayed for several months because the infant's early behavior appears to be relatively normal [3].

Diagnosis may be made in utero via standard ultrasound, and confirmed with a high quality ultrasound [3, 5].
Ultrasound, magnetic resonance imaging (MRI) (pre and postnatal) and CT-scan are commonly used to make the diagnosis [5, 6].
Ultrasound examination is a useful diagnostic tool in the prenatal diagnosis of hydranencephaly and shows, at 21 and 23 gestational weeks, which is characterized by the absence of cerebral hemispheres, replaced by an anechoic content filling the supratentorial level. Thalami brain stem, and cerebellum are preserved [5].
After delivery, CT and MRI scan are used to differentiate more accurately hydranencephaly from holoprosencephaly or severe congenital hydrocephalus [5, 6].
In the present case, CT-scan demonstrates replacement of brain parenchyma with fluid density in the supratentorial level. No parenchymal rim remains around the CSF cleft. The residual parenchyma consists of the thalami and posterior fossa which is typical of hydranencephaly.
Transillumination is a useful diagnostic tool for diagnosis of hydranencephaly, in absence of other possible neuroradiological examination [5].
According the neurological signs and physical examination of the head in antenatal and postnatal periods, MRI remains the best imaging modality [5].
Electroencephalogram may be useful to confirm the presence and type of seizures, as it relates to their treatment [5].
Angio-MRI is a useful imaging tool to find congenital anomalies of the cerebral vascular structures [5].
The differential diagnosis is severe hydrocephalus, bilateral schizencephaly, and holoprosencephaly [1, 2, 3].