Herpetic encephalitis caused between 5% and 10% of total encephalitis. The clinic feature is fever, neck stiffness, and neurological symptoms. Serology and imaging tests are vital for diagnosis, but occasionally may be normal. Due to that, when the diagnosis is suspected, physicians need to initiate the treatment as soon as possible to avoid possible complications. A propos of a case report, we will do a review about the utility of various diagnostic tests and techniques, including the magnetic resonance spectroscopy, which may be useful for differential diagnosis with other processes.

Encephalitis means inflammation of brain tissue. The annual incidence of this disease is between 3.5 and 7.4 per 100,000 habitants, being most prevalent at child age and male gender [1]. Within viral encephalitis, Herpes simplex virus (HSV) comprises between 5% and 10% of total encephalitis without differences between sexes. Encephalitis HSV-1 is more prevalent in adults, while HSV-2 is more frequent in children [2]. It has been observed that this disease is more severe in children and the elderly [3]. The polymerase chain reaction (PCR) in cerebrospinal fluid (CSF) is a diagnostic technique highly sensitive and specific for the diagnosis of encephalitis, although false negatives have been appreciated related with the stage of the disease [4]. Imaging tests such as magnetic resonance imaging (MRI) and MRI spectroscopy are very useful in clinical practice for differential diagnosis and monitoring. A purpose of a case report in a patient affected of herpes simplex virus encephalitis, a review of the utility of these tests is performed.

The patient was a 49 years old woman, without allergies, and with a history of chronic alcohol abuse and smoking 20 cigarettes per day. It does not intake medication regularly. Suddenly, she suffered sensory aphasia with tonic-clonic seizure, drooling, sphincters relaxation, psychomotor agitation post crisis, and fever ((38’5ºC). On physical examination, the patient was conscious and slightly disoriented in time and space with retrograde amnesia (last 48 hours) and indifferent attitude. The neurological examination showed no disturbs of cranial, and strength and sensitivity of the extremities preserved without alterations of tendon reflexes. Notably, a slight alteration of balance and gait with minimum difficulty of the cervical movement was observed. Cardiopulmonary and abdominal examinations were unremarkable. No disturbs were observed in lower extremities or ganglion chains.
Laboratory tests showed only leukocytosis (18,000 / mm3), with a predominance of neutrophils (75.5%) and sodium of 128 mEq / L in peripheral blood. CSF had a clear aspect and it study showed an increase in the number of leukocytes (200 / mm3) without formula disturbs. The first test of brain imaging realized, a computed tomography (CT), showed no abnormalities. The electroencephalogram objectified abundant pleds at left temporal level. With these results, differential diagnosis was realized between acute confusional syndrome secondary to fever versus meningitis / encephalitis.
During the hospitalization period, serological and PCR studies of brucellosis, toxoplasmosis, syphilis, Epstein - Barr virus (EBV), cytomegalovirus (CMV), herpes simplex virus (HSV), varicela zoster virus (VZV), and enteroviruses were realized with negative results. Human immunodeficiency virus (HIV) serology and pneumococcus and Legionella antigen in urine were also negative. Another brain CT was performed showing a hypodense lesion at left temporal level, which was confirmed in a brain MRI study, concluding that this image was compatible with a residual herpes encephalitis process at left temporo-insular versus a grade 2 glioma, although the latter was less probable due to the evolution of the imaging tests (Figure 1). 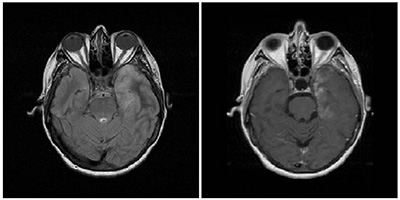 Figure 1:Brain CT and brain MRI study where is observed a hypodense lesion at left temporal level, compatible with a residual herpes encephalitis process at left temporo-insular versus a grade 2 glioma.

Because of the high clinical suspicion of herpetic encephalitis, treatment with intravenous acyclovir for 14 days was initiated with favorable clinical evolution, disappearance of neurological symptoms, and fever. The patient was discharged with developmental control at 6 weeks where a new MRI brain study was performed. It showed the known injury with increased signal caption and unfavorable evolution. At this time, the patient suffered loss of memory and behavioral disturbances. Due to this evolution, a new differential diagnosis was realized between residual herpes encephalitis process at left temporo-insular versus a grade 2 glioma. A MRI spectroscopy was performed, and it results showed increased levels of myoinositol and choline compared to creatinine levels, decreased N-acetylaspartate (NAA) levels, and presence of lipids and lactates, suggesting the diagnosis of residual lesions of a herpes encephalitis disease (Figure 2 and 3). 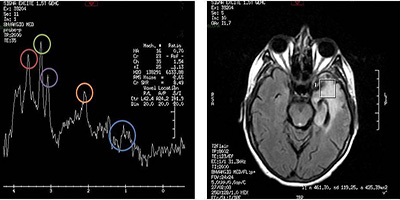 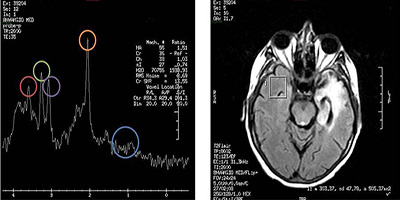 The patient of this case report showed symptoms of a herpetic encephalitis process (fever, stiff neck, neurological clinic), but the results of diagnostic tests performed at first time (serology) were not clear. PCR study of HSV in CSF has a sensitivity and specificity greater than 95%, remaining the positive result until five to seven days after the onset of symptoms and / or treatment [5,6]. The false positive or negative results are rare, and are related with the early or late perform of this test (within 72 hours of the onset of symptoms or more than 10 days), treatment with antivirals (4), or the presence of PCR inhibitors (Heparin or degradation products of hemoglobine) [7]. Previous studies showed series of patients diagnosed of HSV encephalitis with a false negative PCR result [8]. In our case, the precocity of the CSF study (in the first 24 hours of the onset of the symptoms), may explain the negative results. Attending to the imaging tests performed, both herpes infection as glioma seen as hyperintense in T2 weighted image, and hypointense in T1 weighted image [9]. Due to that MRI spectroscopy is a useful tool in the differential diagnosis. In both diseases, decreased levels of NAA (a marker of neuronal destruction), increased levels of choline (a cell regeneration marker), and decreased levels of creatinine (a marker of energy reserves) may be observed, but in acute encephalitis, increased levels of lactate are observed as a result of anaerobic glycolysis [10]. Decreased levels of NAA and increased levels of choline are observed in neuroinflammatory brain disorders. However, non-primarily inflammatory brain disorders, including stroke, epilepsy, traumatic brain injury, and hepatitis C virus have also increased levels of choline [11].
MRI spectroscopy evaluate resonance peaks of different metabolites (parts per million of them, ppm). NAA increased levels may be observed at frequences 2,02 and 2.52, while creatine may be evaluated in 3.02 and 3.94 frequences. Choline and lactate levels disturbs are observed in frequences 3.22 and 1.33, respectively. On the other hand, myo-inositol peaks are represented in frequences 3.54 y 4.06, and lipids at 0.9 and 1.3 ppm [12].
MRI spectroscopy results in stroke are similar to encephalitis. The differential diagnosis between these diseases, without considering the symptoms, is the lactate levels. In stroke, it is not observed constantly increased levels of lactate, and it peaks levels combined with NAA data provides useful predictive information about the viability of peri-infarct tissue in acute stroke [13]. Decreased levels of creatinine are observed in hepatitis C virus disease, decreasing by this way the NAA /creatine ratios in the cerebral cortex [14]. Both disturbs in NAA and choline levels are observed in acute phase of traumatic brain injury, while in the chronic stage are closed to normal values [15]. In epilepsy, the MRI spectroscopy results are observed to be similar to encephalitis [16].

In conclusion, herpes encephalitis can occur sometimes with apparently normal diagnostic tests. Due to that, if a suspected diagnosis is observed, it is necessary to initiate antiviral treatment to avoid possible complications. Moreover, nowadays physicians have access to imaging tests such as MRI spectroscopy, which may be a useful tool as an alternative to invasive tests such as biopsy, which still being the gold standard nowadays.