Introduction: Gastric carcinoma is the second leading cause of cancer-related death in the world. The aim of this study is to evaluate the role of E-cadherin and Ki-67 expression in gastric cancer and their correlation with clinicopathological factors.

Materials and methods: In this study, gastric cancer patients who underwent total gastrectomy were selected and their pathologic slides evaluated by immunohistochemical analysis to assess E-cadherin and Ki-67 level. Additional data including lymph node involvement, tumor site, and depth were also considered.

Results: Total of 52 patients were considered. The most common diagnosis was adenocarcinoma (82.7%). E-cadherin was negative in 46.7% of the patients while Ki-67 was present in 76.4% of the cases. There was a significant relation between E-cadherin and lymph nodes involvement (p=0.021). There was a significant relation between Ki-67 and the cancer grade (p=0.035) and patient gender (p=0.003). However, no other significant differences between the study parameters were noticed.

Gastric cancer is one of the most common cancers in the world. Until the 1980s it was the leading cause of cancer-related death which was overtaken by lung cancer later [1]. Approximately 22,220 patients are diagnosed with gastric cancer annually in the United States (US) and 10,990 of these patients are expected to die [2]. The prognosis of gastric carcinoma is poor. The overall 5-year survival rate of all people with stomach cancer in the US in the period of 1999-2005 was estimated to be 26.5% [3]. In recent decades, there was a significant reduction in the incidence of gastric cancer and its mortality rate in the US. This has also occurred in most of the western industrialized countries [4]. Part of this decline may be due to the recognition of certain risk factors such as Helicobacter pylori (H. pylori) and other dietary and environmental risk factors [4-6]. The risk of gastric cancer in people who have chronic H. pylori infection increases by a factor of three [4]. The histological types of gastric neoplasms are adenocarcinoma which is the most common (95-90%), lymphoma (4%), carcinoid (3%) and mesenchymal tumors including leiomyoma and schwannoma (2%) [1]. Gastric carcinoma is a silent disease and often patients are not aware of their disease until reaching the end stages. Symptoms include weight loss, abdominal pain, vomiting, dysphasia, melena and altered bowel function [7]. Advanced stages of the disease at the time of symptoms presentation, warrants research for a new prognostic indicator.

Cadherins are transmembrane glycoproteins that mediate the Calcium-dependent cell-cell adhesion. They are the major part of the adherent junctions and result in the epithelial barrier integrity between the adjacent cells. This epithelial barrier keeps the underlying tissue safe from the harmful agents. So E-cadherin has an important role in tissue immunity. Also, studies show that the development of human carcinomas is often associated with the loss or mutation of the E-cadherins. Selective loss of E-cadherin can cause invasive carcinomas [8]. Since all the normal cells in the body have adhesion molecules, antibodies can be designed to recognize the altered adhesion molecules and selectively attack them. This will help to reduce the side effects of the surgery, chemotherapy, and radiotherapy, and develops the new methods of therapy in the higher stages of cancer [9]. Several studies have indicated an association between E-cadherin presentation and tumor cell sensitivity to chemotherapy agents but the relationship between E-cadherin expression and gastric cancer prognosis is less clear [8, 10-11].

Ki-67 is a non-histone nuclear protein associated with cell proliferation. It presents in all active phases of the cell cycle. There are several studies that demonstrate the prognostic role of Ki-67 in breast cancer [12].

Due to the high incidence of gastric cancer and the increasing use of immunohistochemical (IHC) markers for both diagnosis and prognosis, establishing a relationship between the expression of E-cadherin, Ki-67 and gastric cancer will be very helpful in staging, determining prognosis and also adding the new complementary therapies.

Materials and Methods: In this cross-sectional study, we evaluated the pathologic slides of gastric cancer patients who underwent total gastrectomy. 52 slides were selected from the pathology archives of Besat hospital in Hamadan city, Iran, between years 2014-2017. All the slides were re-evaluated and reconfirmed by an expert pathologist using a light microscope. After reconfirmation of the diagnosis, formalin fixed paraffin embedded specimens were selected for IHC analysis to assess E-cadherin and Ki-67 expression (Image 1, 2). Additional data including lymph node involvement, tumor site, and tumor depth were also considered. We excluded patients who had chemotherapy or radiotherapy before surgery. Also, tumor slides that were not suitable for IHC have not entered the study 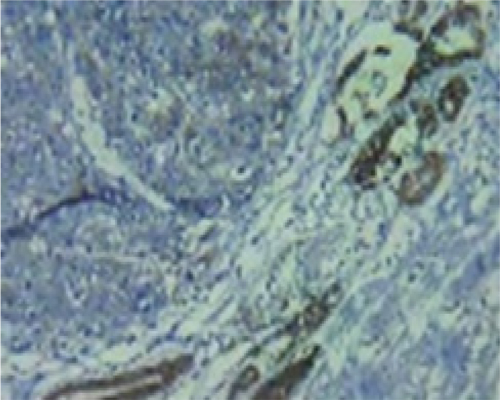 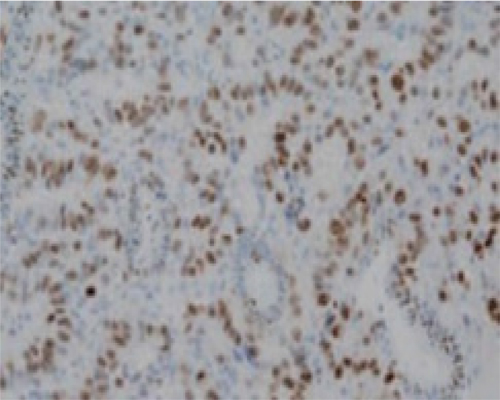 Statistical analyses were performed with SPSS 17.0 Statistics Software (SPSS Inc.). Chi-square test and T-test were used for analysis. A P value <0.05 was considered to indicate statistical significance and data was reported as the mean ± standard error.

Table 1: The frequency of gastric cancer based on the presence of lymphatic invasion, perineural invasion, marginal invasion, and vascular invasion. 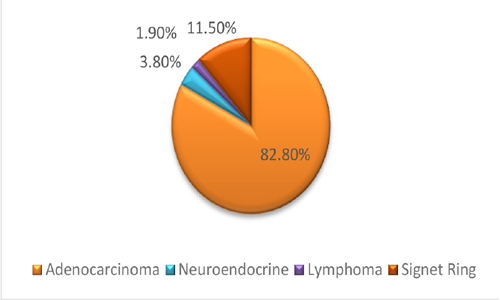 Figure 1: Frequency of patients with gastric cancer based on pathology.

Table 2: Clinicopathological characteristics of 52 patients with gastric cancer and their relationship with Ki-67 and E-Cadherin.

Ki-67 is a nuclear antigen which presents in proliferative cells and is absent in resting quiescent cells (G0 phase). The Ki-67 is a well-known proliferation marker and has been extensively used to estimate the growth fraction of tumors [13]. In our study, Ki-67 was presented in 76.9% of the patients. Based on gender, Ki-67 was positive in 63.6% of the male patients and 100% of the female patients. This difference is statistically significant, indicating that the gene expression of Ki-67 is higher in women than in men. This observation concurs with the data obtained by Lazar [13] who observed a significant relation between Ki-67 and the gender

Some studies have shown significant higher Ki-67 in intestinal type of gastric cancer [14-15]. However, in the other studies, no correlation between the proliferation of neoplastic cells and the histological type of the tumors were demonstrated [16-17]. In our study, the intestinal type was 75% of the tumor pathology but the results did not show a significant relationship between the gastric cancer pathology and the Ki-67 level. The difference between the studies may be explained by the difference in the evaluation methods such as IHC staining.

We observed a tight correlation between the degree of the tumor differentiation and the Ki-67 score (grade of the neoplasm). In Lazar [13] study, well-differentiated carcinomas (G1) were characterized by Ki-67 level of less than the mean level and poorly differentiated carcinomas had intense proliferative activities, with higher Ki-67 score [13]. Also based on other studies the role of Ki-67 overexpression and prognostic value is significant. K-67 level is strongly related to the higher grade of tumor malignancy which is similar to our study [18-20].

There was no relationship between the expression of Ki-67 and the tumor depth, size and other clinicopathological factors such as lymph node metastases and level of tumor invasion. This result is similar to most of the other studies [13, 21-24]. The study by Li et al. [25], reported the expression of Ki-67 in 58.3% of cases, which is lower than our study. In addition, Ki-67 was significantly related to the tumor size, grade, clinical stage, lymph node and distant metastasis [25]. Further, the five-year survival of patients with positive Ki-67 expression was lower than other patients [25].

In the present study, pylorus and antrum were the most common tumor sites but the site of the tumor was not related to the expression of Ki-67. In Lazar [13] study, cancers developed at the level of the cardia and those extended in the entire stomach proved to be more aggressive, with a higher level of Ki-67.

E-cadherin is a transmembrane glycoprotein playing an important role in maintaining cell-cell adhesion. E-cadherin is involved in the modulating of cell proliferation, survival, invasion, and migration signaling pathways. Therefore dysregulation of E-cadherin leads to dysfunction of gastric epithelial cells which results in gastric cancer development [26].

In our study, E- cadherin was related to the number of lymph node involvement but there was no association with the other factors. Zhang et al. [27] evaluated 94 gastric cancer patients by the method of IHC staining to determine the role of E-cadherin in cancer development. The E-cadherin positive rate was 65%. Although no significant difference was found regarding of E-cadherin expression there was a significant correlation between E-cadherin and MUC1 (mucin 1, cell surface associated) and MUC2 (mucin 2, oligomeric mucus gel-forming) presentation. It was concluded that E-cadherin expression alone does not have a role in gastric cancer, but its synergistic effect with MUC2 is significantly related to gastric cancer development [27]. Kim et al. [28] in Korea investigated the role of E-cadherin methylation in non-small cell lung cancer. In this study, 305 patients with non-small cell lung cancer were analyzed by polymerase chain reaction for the presence of E-cadherin methylation. Also, the presence of Ki-67 was examined using IHC staining. E-cadherin methylation was observed in 43% of the patients, more often (88%) in higher stages (Stage IV). The study by Li et al. [29] in 2014, indicated that E-cadherin can predict the overall survival and risk of metastasis in Asian patients with gastric cancer.

Our study suggests the routine evaluation of Ki-67 level as a useful tool in the identification of patients with more aggressive gastric cancer and its contribution to the better therapeutic approach. Also, E-cadherin might be used in the routine clinical management of gastric cancer. Understanding its underlying molecular mechanism can have an impact in the management of gastric cancer patients, and could be used in effective molecular target therapy. New methods of target therapy in patients with E-cadherin mediated gastric cancer, could be the direction of future studies. Future research should focus on the other tumor suppressor genes and oncogenes which are expected to have a role in gastric cancer.

We thank our colleagues who provided insight and expertise that greatly assisted the research.