Introduction: Cardiac arrest constitutes one of the main causes of mortality in the world. The early initiation of cardiopulmonary resuscitation (CPR) has been found to be directly related to survival rates. Several studies observed the relevance of teaching it in schools. The present study values the knowledge of CPR in adolescents of a Spanish institute before and after the development of an educational activity.
Material and Methods: A theoretical-practical program was developed in adolescents between 15 and 17 years old. The knowledge about CPR was evaluated with 3 questions before and after the activity. The questions asked about the emergency telephone numbers, the need to initiate CPR on a breathing but unconscious patient, and the number of compressions and ventilations per cycle during CPR.
Results: A total of 88 surveys were collected. Statistically significant improvements were observed in all cases after the development of the activity (p< 0.05 in question 1, p< 0.01 in question 2 and 3).
Conclusion: The teaching of basic CPR in schools is considered a useful and effective way of reducing mortality rates in patients with cardiac arrest. Due to that, within the educational process, basic CPR should be considered as an essential subject

Sudden cardiac arrest (SCA) is the leading cause of death in the United States, Canada and Europe, with a higher mortality rate in those produced at the patient's home compared to other places [1, 2]. Another important variable in mortality is the rapid recognition of the emergency situation as well as the early initiation of resuscitation maneuvers. In fact, a higher long-term survival rate is observed the earlier they are initiated [3]. The early initiation of basic cardiopulmonary resuscitation (CPR) maneuvers is vital because at 3-5 minutes of SCA the brain is irreversibly injured due to lack of oxygenation. This time is much lower than the time required by the Medical Services to arrive to the place of the event. Due to that, a delay in the initiation of basic CPR is observed, and it is found that less than 10% of the subjects who suffers an out-of-hospital SCA survive. Several studies observed that this survival rate could increase to 40% if early resuscitation maneuvers were performed [4, 5]. The most frequent causes for delayed initiation of basic CPR are: failure to recognize the critical situation, lack of knowledge about first aid, fear of infection, and fear of making mistakes that may be irreparable [6].
In Spain, 25,000 deaths per year due to myocardial infarction occur before that the patient could receive medical care [7]. Several cases are produced on the public road and are witnessed, so they would be susceptible to receive support basic CPR until the reach of the Medical Services. In addition, there are other situations, such as accidents, poisoning or drowning, where CPR may also save the patient's life. These theories has led to several medical societies and institutions to develop programs to teach to the general population basic CPR [8]. However, it has been observed that CPR is performed in less than 33% of witnessed SCA [9].
The purpose of this study is to evaluate the usefulness of the application of a learning program in institute students on basic CPR. This activity was developed by Residents of Primary Cared Medicine of an urban Health Center (Delicias Sur Health Center, Zaragoza, Spain).

A theoretical-practical program was developed in adolescents between 15 and 17 years old of Jerónimo’s Zurita School (Zaragoza, Spain). All the students included in this range of age were evaluated. The activity was performed by Residents of Primary Care Medicine (fourth year of specialty) of the Reference Health Center of the district. The program consisted of a theoretical and practical session of 2 hours each. The teaching model was based on the latest American Heart Association (AHA) protocols published to date (https://eccguidelines. heart.org/index.php/circulation/cpr-ecc-guidelines-2/, visited the 1st of November of 2016). The theoretical part consisted of an exposition of current protocols, while the practical part was based on simulations with training dummies as well as semiautomatic external defibrillators (SAED).
To verify the usefulness of the activity, a descriptive observational statistical study was performed questioning the students with a basic test of theoretical knowledge about CPR. The same questionnaire was repeated after the activity. The residents (3 per session) were trainned to ask the questions in the same manner. Question number 1 and number 3 were open questions while question number 2 was a closed question. The items that were collected were the following:
1. Which are the phone numbers to call if you need an urgent medical care?
2. If you are with an unconscious but breathing patient, CPR should be performed?
3. Which are the frequency of compressions and inspirations in a CPR cycle? (Write first the number of compressions and then the number of insufflations).
The questionnaire was anonymous and the variables age and sex were collected as identification variables. Prior to the realization of the activity, institute as well as the parents of the students was informed about the program and an informed consent of all of them was collected. For the subsequent assessment of the activity, according to the previously mentioned AHA criteria (30 compressions and 2 inspirations in a CPR cycle), and taking the correct numbers for receiving urgent medical care numbers 112 and / or 061, the answers were scored as s “correct” or “incorrect”. Once the results were processed, the data were analyzed using the IBM Statistics v. 22 applying the Chi-square statistic and Fisher`s exact test to detect the significance of parameters on categorical variables. p< 0.05 was used to determine statistical significance.

Attending to the first question, which referred to the knowledge of telephone numbers to call if an urgent medical care is required, the results prior to the intervention showed that 83 students (94’31%) answered correctly while 5 (5’69%) did it in a wrong manner. After the intervention, these values were 88 (100%) and 0 (0%), respectively. This difference was statistically significant (p<0.05). Figure 1 show these results. 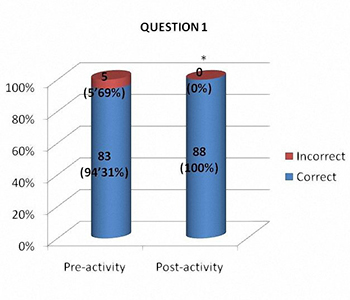 Figure 1: Attending to the question about the telephone numbers which is needed to call in an emergency situation, statistically significant differences were observed in scholars afther the activity (p< 0.05). * p< 0.05.

Considering the second question, which referred to the need to perform CPR in an unconscious but breathing patient, 63 students (71’59%) answered correctly before the intervention, while 25 (28’41%) did it incorrectly. After the development of the activity, these values were 77 (87’5%) and 11 (12’5%), respectively. These results were statistically significant (p<0.01).

Figure 2 show the observed differences. Finally, attending to the number of compressions and insufflations per CPR cycle (question number 3), the pre-intervention results showed 7 correct answers (7’95%) and 81 incorrect answers (91’05%). After the activity, the results were 73 (82’95%) and 15 (17’05), respectively. These results were statistically significant (p<0.01). The results may be observed in figure number 3. 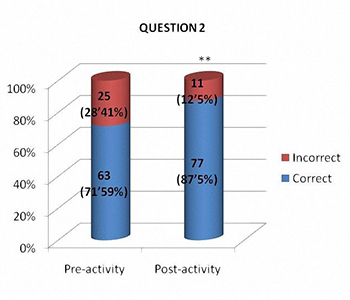 Figure 2: Statistically significant differences (p< 0.01) were observed in students in question number 2 after the activity (necessity to do compressions during CPR in an unconscious but breathing patient) ** p< 0.01 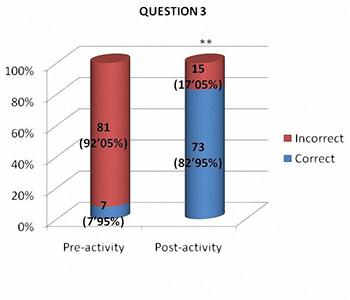 Figure 3: Attending to the question about the number of compressions and insufflations during CPR, statistically significant differences were observed in students afther the activity (p< 0.01). ** p< 0.01.

The present study values the usefulness of the application of a basic CPR teaching program in students of an institute. The results showed an acceptable knowledge about the basic notions in this matter, although with more problems in the most practical part (number of compressions and insufflations in basic CPR). Independently of the previous knowledge, the utility of this type of programs was observed because of statistically significant differences were obtained in all the areas valued after the accomplishment of the activity. Despite the statistical data, some students failed the questionary after the intervention. This may be posible due to the number of students per theorical session was higher than the desired (20- 22 per session). This could influence in the attention given by the students to the Primary Care Residents. Because of this, we consider that with smaller groups, the results would have been more satisfactory.
The usefulness of this type of activity has been evident in different studies. In countries such as Norway or Denmark, where several school education programs have been conducted, significant increases in the survival rate of patients with SCA have been observed [10-12]. The authors agree that these results are due to the development of these programs.
The choice of this age range in our study is due to the fact that this type of activities in adulthood or late adolescence are less effective [13, 14]. It is attributed to the greater interest of young people in learning as well as their greater accessibility to acquire the knowledge and to apply it in case of necessity [15]. However, studies performed in children aged between 4 and 5 years old, where the objectives are based on the recognition of SCA, the usefulness of this kind of activities has been objectified [16]. Nevertheless, if the initiative to perform basic CPR is evaluated, there are differences between the studies which could be attributed to cultural features. In example, New Zealand students would do it in 84% of the cases to a family member and 64% of the cases to a strange person [17]. However, in Japan, these values drop to 53 % and 13%, respectively [18]. Regardless, 50% of the students confirm that they would be afraid of the need to perform basic CPR, and this fear does not diminish after a second training activity [17]. This reaffirms the theories of several authors which suggest the need to implement this type of education in a formalized way in schools [18].
In addition, the application of this kind of activity in institutes provides the possibility of introducing physiopathological concepts of SCA, which are also increased after the application of this kind of programs [8]. These are not only increased after the course, but are maintained after one year, which differs from the adult population [19]. Other studies observed that this acquired knowledge remains in the students in a long time, including up to 6 years [20]. Despite these results, it has been observed that after a longer period of time, the subjects who perform CPR make more mistakes due to the forgetting of the teachings, which strengthens the theory of implementing a continuing training program on this subject [21].
Attending to the different manners to develop the CPR teaching programs, it has benn developed self-taught programs based on theoretical notions and practice at home with individual dummies with good results [1, 10, 11]. This model has been shown also to increase the knowledge about CPR in the general population due to the students act as teachers within their family and friends [1, 22]. Teaching-based programs via computer simulations are useful because they can arouse greater interest in adolescents, but the results are worse than those performed in a practical manner [23, 24]. Attending to the classical format, which is based on a theoretical and practical model, there have been no statistically significant differences in the results when the activities are given by health professionals or properly trained teachers [6, 23, 25, 26]. In addition, no differences have been observed between the uses of specific manikins compared to more rudimentary simulators based on plastic bags, which makes it possible to apply these activities independently of the available resources [27]. The use of information cards or songs during activities has been observed to increase the students' comprehension skills [28, 29].
In conclusion, the teaching of basic CPR in schools is considered a useful and effective way to reduce mortality rates in patients with SCA. The implementation of this knowledge may be developed in different manners (theoretical, theoreticalpractical, face-to-face or online, etc.), obtaining good results in all the different modalities. That is why, within the educational process, basic CPR must be considered as an essential subject from an early age. For a correct implementation, successive programs performed to renew the knowledge must be developed to maintain the knowledge acquired.