Special Issue Special Issue, Issue Trauma: an overview of its incidence and effects in the community - 2017

In order to provide a robust opinion with regard to psychological injuries following a road traffic accident, experts follow a process of differential diagnosis. This involves examining different sources of evidence to consider a range of potential diagnoses. Arriving at a robust diagnosis is important for decision making around treatment and prognosis in civil litigation. Through means of a case illustration, this paper discusses issues in the process of differential diagnosis of traumatic psychological symptoms in a medico-legal context.

Following a road traffic accident, individuals can report an array of psychological symptoms, including nightmares, sleep difficulties, low mood and anxiety, as well as physical injury and pain. Psychologist experts are instructed to make sense of all the different sources of evidence, such as claimant self-report interview, presented to them in order identify symptoms of trauma and other psychological problems to provide a robust diagnosis. This may be made more difficult in the context of pain or other physical symptoms which can often obscure or overlap with symptoms of psychological trauma, making differential diagnosis more challenging.
A process (or road map) of differential diagnosis [1,2] consists of four steps. Firstly, consideration of malingering, untruthfulness or unreliability. Secondly, consideration of medical or physical explanations for 'psychological' problems reported. Thirdly, determination of primary disorder and ruling out of less likely diagnoses. Lastly, establishing the boundary with 'no mental disorder'. (see Figure 1 below) 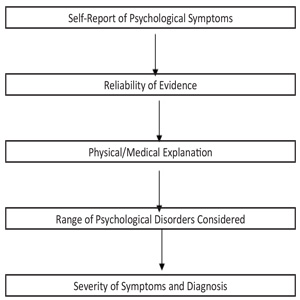 The challenge for the expert is to navigate this process while also considering issues such as pre-existing psychological problems, contemporaneous stressful life events and inconsistencies between different sources of evidence. In particular, inconsistences between the different sources of evidence, such as claimant self-report, medical reports, and GP records, need to be examined in order to achieve a most consistent and robust opinion [3].

Background to Case Illustration
Ms S was a 54 year old woman who, whilst carrying out her job as a domiciliary care worker, was driving alone on a motorway though Glasgow in the middle of the day. She was travelling at approximately 50 miles per hour in the right hand lane when a van pulled over from her left and collided with her car. The collision caused her car to spin a number of times and ultimately collide with the central reservation before being brought to a halt. She did not lose consciousness during the incident. She was taken to a local hospital where she was assessed but discharged the same day with medical advice. She reported physical injuries in terms of whiplash, bruising and pain to her back neck and shoulders.

Expert Assessment
A report from a clinical psychological was requested by Ms S's solicitors to assess the extent and duration of any possible psychological injury resulting from the accident. The assessment took place approximately 12 months after the accident. At interview, Ms S reported a number of psychological symptoms had occurred in the 3 months following the accident. These included:
• Intrusive thoughts of the accident and occasional nightmare
• Sleep problems (this was affected by pain as well as intrusive memories/nightmares)
• Low mood
• Increase in feelings of vulnerability and overall general anxiety
• Reduced social contact with friends and family
• Avoidance of car travel (both as a driver and passenger)
• Irritability, tension and stress in the family home with her husband and children
• Increased alcohol consumption
Ms S's presentation appeared consistent with the report of her psychological and physical symptoms. She spoke clearly about her problems and was appropriately emotional when describing the accident. She said there were some details of the accident and her psychological symptoms that she could not recall.
Ms S reported that she had been off work for 6 weeks after the accident due to her physical injuries and pain. She reported that the thought of driving when she returned to work was 'terrifying' and that she probably could have returned earlier but for this. Her employers were very supportive of her and she was able to negotiate a transfer to a care home relatively near to her house which did not require her to provide domiciliary visits or the need to drive for work. She stated she would rather walk to work than travel in a car.
Ms S reported that she had a prior period of depression approximately 15 years ago after the birth of her first child. She has been treated with antidepressants at the time which she took for about 12 months. She stated that she had not had any recent problems regarding low mood or anxiety.
Perusal of Ms S's medical records supported her description of her previous episode of depression and also no recent consultations related to low mood or anxiety in the years prior to accident. Following the accident, she attended her GP on a number of occasions describing significant ongoing pain as well as poor sleep, travel anxiety and low mood. The records indicated that her GP had provided pain relief and some support with regard her psychological difficulties but had generally adopted a watchful waiting approach. The notes indicated that antidepressants were discussed but no prescriptions were issued.

Road map to differential diagnosis:
Consistent with the process of differential diagnosis, Ms S's reliability was considered. Bearing in mind the both the consistency of presentation in the interview room, and the consistency between different sources of evidence, namely her interview presentation, description of symptom, medical report and GP records, it was decided that she presented as reliable and trustworthy and there were no reasons to doubt the veracity of her report of the accident and its effects.
Ms S's report of her physical injuries and pain was then considered. She reported that she continued to suffer residual discomfort and pain at 12 months after the accident. This was consistent with the prognosis given by a orthopaedic expert. She reported that initially her pain adversely affected her sleep, her physical activity and the physical ability to drive. She stated that she considered that it was the pain that prevented her from trying to get back into the car and drive for 2 weeks after the accident. Once the pain had reduced, she stated that she was too anxious to drive. Her report was supported by GP consultations. It was considered that her physical injury and pain was consistent with the nature of the accident and was improving in line with the prognosis detailed in the medical report. It was considered that her report of the physical effects of the accident was appropriate and that there were not physical or medical explanations for her psychological symptoms.
The primary diagnosis relating to the description of her symptom was considered next. Ms S reported some re-experiencing symptoms (nightmares, intrusive thoughts), increased arousal (sleep problems, irritability) and avoidance, however, she stated that she did not fear for her life at the time of the accident. It was deemed that these symptoms did not meet the criteria for Post Traumatic Stress Disorder. The main feature of her psychological symptoms following the accident was anxiety in relation to travelling as a driver and a passenger. She described consistent avoidance, which initially was medicated by her pain, but once this had reduced was mainly related to anxiety. She also described numerous symptoms of depressed mood, but it was felt that these did not fully meet diagnostic criteria. Furthermore, her GP did not prescribe an antidepressant. It was decided that her travel anxiety symptoms were indicative of a Specific Phobia.
In order to decide whether the travel anxiety met the diagnostic criteria for a specific phobia [4], the severity of the symptoms and the effect on them on her life was considered. She had almost completely avoided driving for 12 months and had experienced significant anxiety on attempts to drive again, consequently, it was considered that this was clinically and diagnostically significant. It was regarded that her symptoms were diagnostically significant for 12 months and ongoing. In terms of treatment, 8 to 10 sessions of cognitive behavioural therapy was recommended. Prior to treatment it was considered too difficult to offer a prognosis and a re-assessment following CBT was recommended.
Ms S. was re-assessed 8 months after the initial assessment. She had received 10 sessions of cognitive behavioural therapy with a clinical psychologist which had helped reduce her avoidance of the car and increase her frequency of driving and also reducing her intrusive thoughts about the accident. An examination of her recent GP records indicated that she had continued to received support, but less frequently. In terms of prognosis, if Ms S continued with this approach to increasing her frequency of driving, then it was likely that her symptoms would resolve in three to six months from the second assessment.

By means of this case illustration it has been demonstrated that, when acting as expert witnesses, clinical psychologists require a thorough approach to analysing evidence provided in the case of psychological injury. Using claimant self-report, medical report and GP records, a process of differential diagnosis can be followed using a road map to diagnosis which arrives at the most appropriate conclusion which is essential for both successful treatment of the psychological injury, also to facilitate appropriate decision making around prognosis.