Vein of Galen malformations (VOGMs) are very rare intracranial vascular defects. VOGMs are well defined, rounded, intracranial space occupying lesions located within the cistern of velum interpositum. Patients may have headache, seizures, proptosis, cyanosis, hydrocephalus, developmental delay and focal neurological deficits.
Antenatal and postnatal ultrasound is the primary diagnostic tool for detecting VOGMs. Both CT and MRI can be used to delineate the malformations cross-sectionally. CT angiography is another diagnostic modality but is technically challenging in neonates with high output cardiac failure due to small volume of contrast passing rapidly through the circulation and for vascular anatomy MR angiography would be a better diagnostic tool. Angiography remains the gold standard for full characterisation of the lesion.
In this study brain CT of an eight-month-old boy showed typical well defined, rounded, isodense space occupying lesion in the midline resulting in massive hydrocephalus.

An eight months old boy presented with enlarged head since birth to radiology department for brain CT-scan. Brain CT was done by a128 slice scanner without and with IV injection of contrast agent. Without contrast images showed a well-defined, rounded, isodense, space occupying lesion in midline, posterior to the tectum and anterior to the tentorium [Fig 1a]. Few focal calcifications were visualized in the periphery of the lesion [Figure 1b].
The lesion was intensely enhanced same like adjacent vessels without internal septation in post contrast images. It was measured 4cm x 3.5cm x 3.5cm in cranio-caudal, transverse and anteroposterior dimensions, respectively [Figure 2a]. This well demarcated mass lesion showed mass effect over the aqueduct of sylvius resulting in massive dilatation of lateral and third ventricles [Figure 2]. Fourth ventricle and cisterna magna were in their normal limits [Figure 2c].
The lesion showed communication with venous sinus [Figure 2d].
The vertebro-basilar circulation seemed normal. Internal carotid arteries with anterior and middle cerebral arteries were normally enhanced.
Significant loss of white matter was appreciated in the supratentorial level.
No gross abnormality was detected in brain stem, basal ganglia and bilateral cerebellar hemispheres.

In this study, we described the CT findings in a case of vein of Galen malformation.
Vein of Galen malformations are rare intracranial circulation defects which account about 1% of all intracranial vascular defects The vein of Galen is composed of the two internal cerebral veins and drain in straight sinus.2 VOGM is the result of direct arteriovenous communication between the arterial network and the median prosencephalic vein which occurs between the 6th and 11th week of intrauterine life [1-5].
Arachnoid granulation is not mature in infants in this situation CSF is absorbed through the ependyma and it is draining by medullary veins causing high venous pressure resulting in hydrocephalus, brain edema and hypoxia [1, 4]. 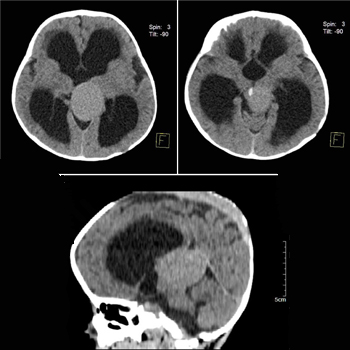 Figure 1: a: Non contrast brain CT section shows, well defined, rounded, isodense, and space occupying lesion in midline posterior to the tectum and anterior to the tentorium due to compression over the 3rd ventricle resulting in massive hydrocephalus. b: Non contrast images shows specks of calcification in the periphery of lesion (arrow). c:Sagital image showing compression over the 3rd ventricle causing massive supratentorial hydrocephalus (arrow head). 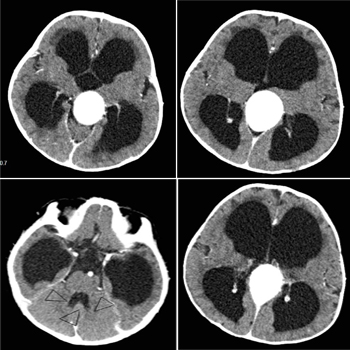 Figure 2: a: Post contrast images demonstrate intense enhancement of the lesion same like adjacent vessels without internal septation. b: The mass lesion showed mass effect over the aqueduct of sylvius and resulting in massive dilatation of lateral and third ventricles. c: Fourth ventricle (arrow head) is not dilated but temporal horn of lateral ventricle is massively dilated. d: Contrast enhanced images showing intense enhancement of the lesion same as vessels and communicating with straight venous sinus.

In neonate it is associated with multiple fistulas. 2 25% of cardiac output is passing through the fistulae resulting in congestive heart failure[1, 2]. Cyanosis may be seen in patients with VOGM and is mistaken with congenital cyanotic heart disease[1, 2].
In infant and children due to single shunt and small fistula cardiac manifestation is absent or may be mild [1]. Hydrocephalus with macrocephaly is existing [4, 6]. These children have failure to thrive due to venous congestion resulting in hypothalamic-hypophyisial dysfunction [2, 6]. Older children and adults have headache, seizures or small group of patients present with developmental delay, focal neurological deficits, proptosis and epistaxis due to low-flow fistulae [2, 6]. Occurrence of subarachnoid hemorrhage and intracerebral hemorrhage is due to changing of blood flow into the pial veins [1, 2, 6].
Plain radiography of skull is not helpful, only will show calcification of aneurismal sac and 50% it occur with thrombosis and reveal CHF features [1, 2].
Antenatal ultrasound showing a hypoechoic well defined cystic pulsatile structure posterior to the 3rd ventricle associated with hydrocephalus and cardiac dysfunction [2].
Contrast enhanced CT of the brain usually demonstrates a well-defined, multilobulated, intensely enhancing lesion, located within the cistern of velum interpositum [2]. Hydrocephalus, peri-ventricular white matter hypodensities and diffuse cerebral atrophy is the associated findings [1].
Thrombosis is seen on contrast enhanced CT as mixed hypodense, isodense and hyperdense areas due to variable maturation of the clot [1, 5].
A crescentic rim of calcification is more commonly seen in patients with thrombosed VOGMs [5]. MRI demonstrates the location of fistula, the arterial components, the venous sac as well as the status of venous drainage and thrombosis [3, 4].
MR angiography is used as a noninvasive alternative to diagnostic angiographic studies in the initial evaluation of these lesions [1].
Angiography remains the definitive study in the complete evaluation of the patient with a vein of Galen malformation prior to transvascular or transcranial therapy [4, 5].