Carbon monoxide poisoning can cause serious damage to brain and myocardium. The sites more commonly affected in the brain are globus Pallidus, caudate nucleus, putamen, thalamus and cerebral white matter. The authors present a case of Carbon Monoxide poisoning in a 33 year old previously healthy electrician who was exposed unintentionally to generator smoke in a close environment for approximately one hour and the patient was unconscious thereafter. Nonenhanced brain Computed tomography was performed on the third day of exposure and revealed diffuse white matter ischemic changes and brain edema. 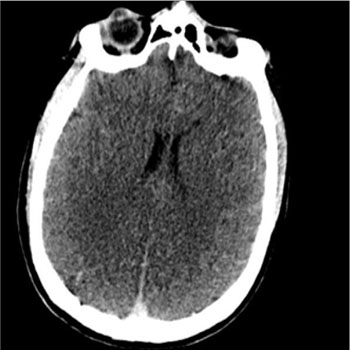 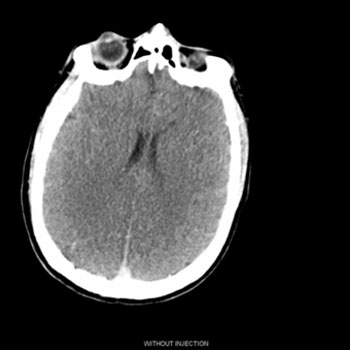 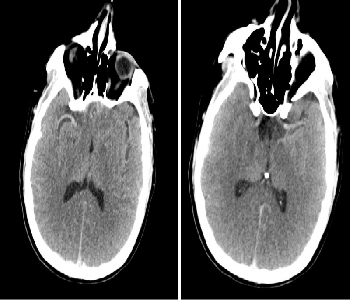 Carbon monoxide (CO) is a lethal, toxic gas produced by incomplete burning of carbon-based fuels and substances [1]. Intoxication occurs by inhalation of natural gas, smoke or automobile exhaust [2]. CO poisoning can cause serious (acute and delayed) damage to brain and myocardium [3]. Various mechanisms are described responsible for brain damage, the most important being hypoxia [3].

The diagnosis is usually suggested clinically [2].
Signs and symptoms are directly proportional to the level of CO in blood. At lower levels; headache is the commonest symptom, while at higher levels, mental status changes, dyspnea, and syncope may occur. Very high levels of intoxication can result in myocardial ischemia, ventricular arrhythmias, pulmonary edema, lactic acidosis, seizures, hypotension, coma, and death [10].
While the diagnosis is usually made clinically and treatment should be started, imaging is useful for understanding pathophysiologic mechanism, delineation of disease extent and determining the prognosis [1, 2, 11].

CT is usually the first line, rapid imaging modality while MRI can depict the changes more precisely, especially in areas where CT is of limited value; like hippocampus [11].
The main imaging features are those of ischemic insult (hypodensity in CT, low signal on T1WI, high on T2WI and FLAIR images and diffusion restriction) [1].

Management depends on early diagnosis and initiation of hyperbaric oxygen therapy, as treatment is of benefit in reversing both cerebral and myocardial tissue damage [11].
Based on severity of insult, the prognosis differs from complete recovery, to long-term neurologic sequelae, and even death [2, 10].
Lesions within deep WM are indicator of a poor prognosis and absence of white matter changes at follow up CT suggest likely improvement [2].