A rare but potentially lethal complication of ICD, Pacemaker or CRT-D treatment named Twiddler’s syndrome is generally diagnosed within first year of implantation. It is characterized by device malfunction due to dislodgement of intracardiac leads because of some form of manipulation by the patient and several other reasons. The following case is about a 40 years old male patient with severe heart failure and ventricular fibrillation who was treated via Cardiac Resynchronization Therapy with Defibrillator (CRT-D) and found that his device was rotated and wrapped around by the dislodged RV lead on his Chest X-ray at 3 months follow up after implantation. Although there is delayed ventricular capture, he complained nothing and the repair procedure was performed 5 days later.

Twiddler’s Syndrome is a very rare but fatal complication of ICD, Pacemaker or CRT-D device and it can be defined as rotation of the pulse generator which may be coiled around by leads and/or twisting of the lead in the pocket mostly due to intentional or unintentional manipulation of the devices by patients, oversized pockets and fewer sutures [1]. Other important causes include: weight loss, obesity, advanced age and female gender [1]. It can be usually leading to lead dislodgement, lead fracture, cessation of pacing, symptomatic bradycardia, and pacing of the diaphragm, brachial plexus or skeletal muscle [1].

A 40 years old male, a chronic smoker and alcoholic, with chronic heart failure was admitted to hospital due to severe shortness of breath and orthopnea. On echocardiography, a dilated cardiomyopathy with 92mm of Left ventricular end diastolic diameter was revealed and his ejection fraction was 24%. On ECG there was left bundle branch block and ST elevations in anterior leads. Coronary stenoses were excluded via Coronary Angiogram. His Brain Natriuretic Peptide (BNP) Value was 5351 on admission and become 2498 after 5 days. During admission he suffered Ventricular fibrillation twice daily and he was treated with Cardiac Resynchronization Therapy with defibrillator (CRT-D) under the current guidelines of CRT. A CRT-D device with active fixation leads was implanted in the left subpectoral pocket. The procedure was done without complication and he was discharged when his symptoms were relieved.
After 3 months of implantation, his CRT-D device was found rotated and coiled around by the dislodged RV lead on chest X-ray (Figure 1). LA and Left Ventricular lead were found intact. On ECG, a delayed ventricular capture was also detected. However, he didn’t express any symptoms. On Examination, we found some scratch marks (Figure 1) around his scar which could be the sign of his unconscious manipulation of the device although he refused to do that.
During the repair procedure, we found intact sutures and a pulse generator coiled around by the dislodged RV lead as we Furthermore, the RV lead was twisted in the pocket but not fractured. However, the tip of it was found damaged. So, the damaged lead was removed and a new one was implanted at RV apex via subclavian approach. After standard measurements with acceptable threshold values, the leads were reconnected to the pulse generator. Then, the device was tightly positioned via extra sutures. 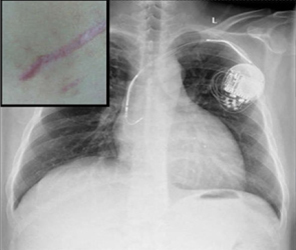 His post op was uneventful and during the subsequent follow ups, the chest X-ray was rechecked and CRT-D was found to be functioning well and the device and leads were found to be in proper positions (Figure 2).

From the time of 1968 when Bayliss and his colleagues first noticed this Twiddler’s Syndrome, it is well known among patients with pacemakers and Implantable Cardioverter Defibrillators (ICDs) [2]. In this 21st Century, CRT and CRT-D devices become very popular and we start seeing that complication in CRT patients [3, 4]. Reported prevalence is around 0.07 - 7% [5,6] and majority of cases occur in the first year of implantation although late Twiddler’s Syndrome was reported [7].
It usually occurs if the pocket is oversized in relation to the device, there is inadequate suture and patients manipulate the device [1]. In those conditions, the device can be rotated over and over until the lead is tightly wound and may dislodge because of traction. Other literatures also said that new types of pacemakers and ICDs are smaller and therefore easier to twist in their pockets. One old literature shows that almost all patients are elderly women aged between 60 and 85 years. This may be due to the anatomy of female at those ages with accumulation of prepectoral subcutaneous adipose tissue and eventually pendant breast. Weight loss and obesity can also predispose this syndrome [1]. In our case, the patient is middle aged male and mildly obese, the sutures are intact, pocket is adequate and scratch marks around the scar are found. So, his unintentional scratching and mild obesity may predispose this complication.
As CRT-D combines both pacemaker and ICD technologies, any finding of pacemaker and ICD twiddler’s syndrome may be seen in the patient. Due to the lead dislodgement, there may be an exit-block or inhibition by oversensing on one hand or inappropriate pacing because of undersensing on the other hand. Because of the cessation of pacing and symptomatic bradycardia, the patient may complain about dizziness, syncope and collapse. There may also be symptoms of stimulation of the diaphragm, brachial plexus or pectoral muscle [8]. Due to additional defibrillation function, CRT-D patients may suffer inappropriate shock delivery and the lacking capability for the treatment of life-threatening ventricular arrhythmias by the device. As worst case scenario, an inappropriate defibrillation therapy may be proarrythmic and may lead to sudden cardiac death [1,9,10]. But, patients may remain asymptomatic especially in pacemaker independent individuals. Our patient also complained about nothing. That may be because of early detection although the RV lead is dislodged and damaged at the tip. There may be fractured and twisted lead causing above findings if we miss this follow up. Therefore, early detection, regular follow up and careful examining are very important.
In conclusion, using subfascial pockets, avoiding oversized pockets and stitching adequate sutures are crucial at the time of implant to reduce the frequency of this complication. Careful reviewing the chest x-ray with focus on the electrode and device positions in all patients during every follow up is necessary to identify minor changes in lead configurations as symptoms do not appeared immediately. Regular and frequent follow ups are also required until one year after the procedure. By early detection of the complication, we can avoid the serious consequences. Patients are also need to be well instructed to avoid stretching the arm above the shoulder level, heavy lifting, playing with device and scratching surrounding area in early months after the procedure.