Cauda Equina Compressed by Bratpfannen-Like Vertebra rather than Protruded Disc: An Unusual Radiographic Images in a Lady with Severe Osteoporosis

# Hong YH and Wang GJ contributed equally and acted as the co-first author.

Burst fracture of lumbar spine may cause cauda equina syndrome to present varying neurological symptoms. The structure causing compression of cauda equina has been known as a herniated disc. Other structures resulted in such compression were rare mentioned. Here, we present an unusual condition with cauda equina compressed by a bratpfannen-like vertebra, rather than a protruded disc. A 76-year-old female with a history of osteoporosis and falling episode 1 year ago presenting with lower back pain for 3 months and a 3-day history of bilateral legs weakness with urinary and stool incontinence. This patient displayed decreased muscle power of bilateral lower limbs, as well as saddle anesthesia and decreased anal tone. Image revealed showed a severe burst fracture with neartotal loss of height in the second lumbar vertebral body (L2), a bratpfannen-like deformity, which abuts to compress the dural sac of cauda equine, not a common herniated disc. The patient underwent subsequent surgical intervention soon. Symptoms relieved 3 weeks later. In summary, we believe the meanings of the distinct features are different from conventional concept when facing such unusual representations.

Burst fracture, a severe type of spinal fracture, means anterior and middle spinal columns collapse [1]. One third people suffered from burst fracture of lumbar spine had neurological deficits [2]. Cauda equina syndrome (CES), the most severe one of them, causes terrible consequences, which includes saddle anesthesia, bowel and bladder dysfunction, and varying lower extremity sensory and motor dysfunction [3]. Most etiologies causing CES are compressed by prolapsed lumbar disc(s) [4]. However, CES may also be resulted from other lesions not just disc only [5]. We report an elderly lady of lower back pain, motor weakness, urinary and bowel incontinence followed by a lumbar burst fracture and presents an unusual image pattern in such an osteoporotic burst fracture with CES.

This 76-year-old lady had a history of falling episode one more years ago. Her ADL was independent until 3 months prior admission when low back pain developed. She complained back pain especially when she changed posture or prolonged standing and walking. She initially visited local clinic and osteoarthritis was told, but the oral pain-killer and physical therapy were ineffective. Three days prior admission, her back pain worsened accompanied with bilateral legs weakness, especially in left leg, which made her difficult in moving in any motion. Besides, urine and stool incontinence ensued.

She came to our OPD for help, where physical examination revealed obvious local tenderness of the low back region. Straight leg rising test showed positive bilaterally with pain while bigger than 30º. Decreased muscle strength in both lower limbs, more severe in left side, muscle strength (R/L): L2:4/3; L3:4/2; L4:4/4; L5:4/4; S1:4/4. Events of saddle anesthesia and decreased anal tone were found as well. Deep tendon reflex was hyporeflexia. X-ray films of lumbar spine showed generalized osteoporosis and near-total loss of height in the vertebral body of the second lumbar vertebra (L2), raising the diagnosis of compression fracture, (Figure 1A). Computed tomography (CT) scan of lumbar spine displayed severe compression fracture of the L2 vertebral body with an impressive “U” shape deformity, like a bratpfannen, (Figure 1B). Magnetic Resonance (MR) Imaging confirmed as burst fracture with vertebral body collapse of L2, with retropulsion of bone fragments leading marked dural sac compression, as shown in Figure 1C. The burst fracture was scored as Type A3.1 by classification of AO [2]. 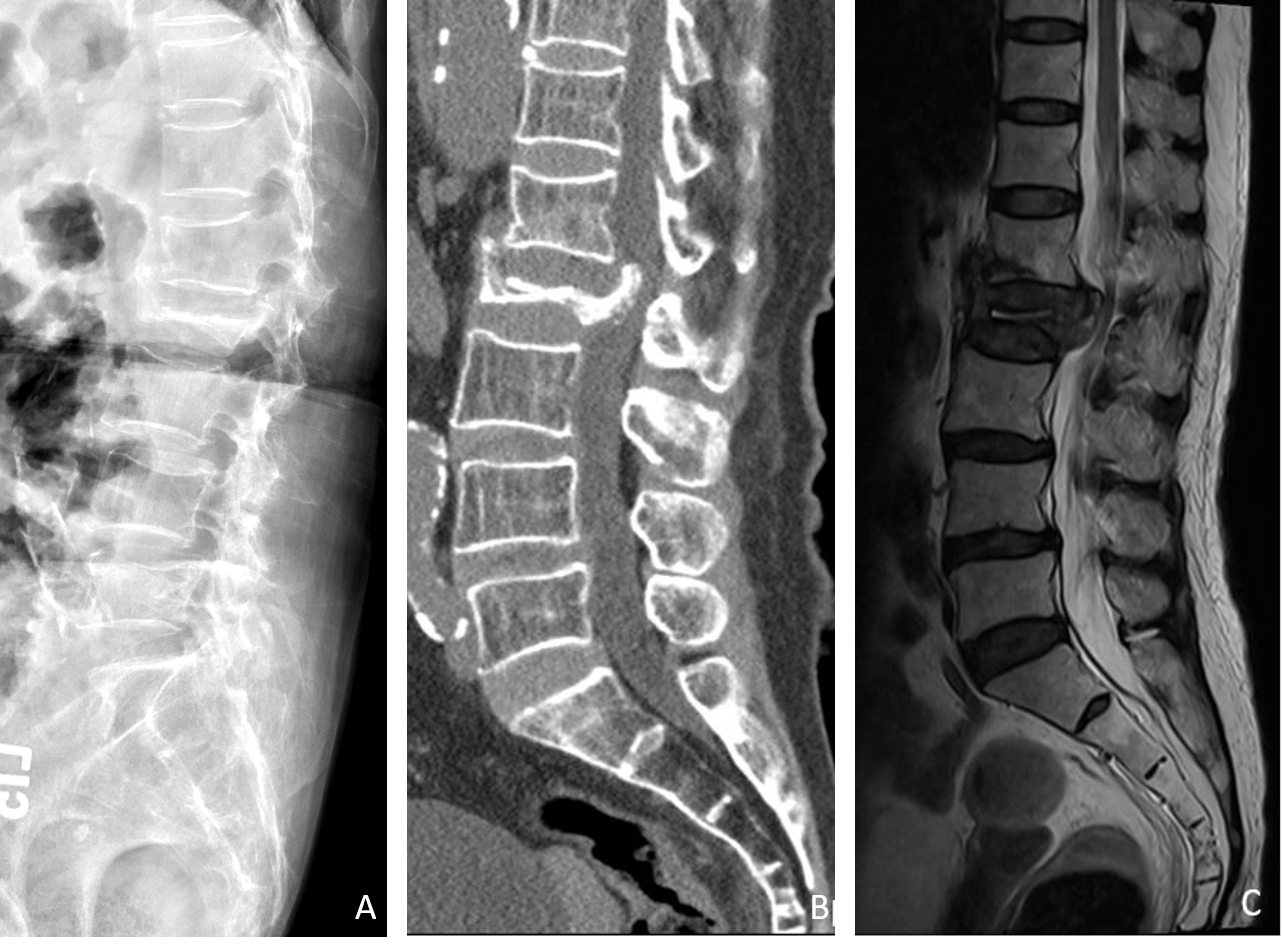 An orthopedics consultation was provided urgently, and she received dexamethasone 8-mg intravenous dose every eight hours. She underwent operation with posterior lumbar interbody fusion (PLIF) over T12-L4, combined with laminectomy and vertebroplasty over L2, as Figure 2. She was then treated with rehabilitation therapy. Sacral numbness and muscle strength improved gradually 1 week later. One month later, she could get off the bed and walk with quadcane. She was discharged stably and impairment of voiding and defecating returned to normal.

The image of the osteoporotic vertebral compression of our case is unique. Plain film of lumbar spine showed near-total loss of height in the vertebral body of L2, and CT/MR scans showed the severe L2 burst fracture with “U” shape, and retropulsion of the vertebra compressing the dural sac of cauda equina significantly. Interestingly, such a deformed compressed vertebra, just like a bratpfannen, abuts to compress cauda equina closely. To our knowledge, the deformed pattern in those images of our case is quite different from conventional sense and raise awareness while watching those unusual representations. In particular, the entity of nerve compression is caused by bony structure, rather than a protruded disc.

Vertebral compression fractures (VCFs) are common and can be resulted from multiple etiologies. It is very important to use images to distinct those apart. With respect to study of VCFs viewing from MR, traditional concept accepted abnormality of bone marrow signal affecting posterior elements as a strong indicator of malignancy, and osteoporotic fractures seldom having signal change in the element. Instead, Mauch et al. [6] stated that osteoporotic fractures commonly cause similar signal abnormality in the posterior element, which was owing to inflammation after biomechanical stress and/or direct injury. Therefore, retropulsion of bone fragments from the posterior aspect of the vertebral body, rather than an expansile and convex contour, is characteristic as benign VCFs [6]. This finding of axial loading from traumatic source, particularly burst-type fractures, presented similarly to our case shown on (Figure 1).

Besides, Laredo et al. [7] reported several CT features that are more commonly found in benign VCFs, such as fracture of the anterolateral or posterior cortex of the vertebral body, a retropulsed bone, fracture lines within cancellous bone, and a diffuse thin paraspinal soft-tissue thickening [7]. Our patient meets the findings of fracture of the anterolateral and posterior cortex and had retropulsed bone.

Yuzawa et al. [8] found that the combination of CT characteristics and MR imaging features enhanced the accuracy of differentiating benign from malignant fractures. The CT findings used in their scoring system included sharp fracture lines without osteolytic destruction in benign VCFs and osteolytic destruction in malignant VCFs. While MR imaging is typically superior in the depiction of most spine pathology, such studies exemplify the utility of CT in providing excellent characterization of cortical and cancellous bone and fracture margins [8]. Our case underwent both image studies not only to differentiate benign and malignancy, but also to define the margin of the compressed vertebra.

Burst fractures frequently occur in lower thoracic and lumbar vertebrae, likely due to the bigger compression forces generated by the weight of the relatively more rigid thoracic rib cage and pelvis on a region that acts as a fulcrum connecting an immobile to mobile portion of the spinal column. Those fractures are seen commonly in patients with falls from height and high-speed traffic collisions in restrained passengers, or with sudden deceleration [9]. Most of these fractures (70%) occur at the thoracolumbar junction (T11- L2). Additionally, 13% of the fractures are located at the thoracic spine (Th1-10) and 18% at the lumbar spine (L3-5) [10]. In an aged population, incomplete burst fractures can be seen after simple falls or even in the absence of trauma [11]. Almost half of vertebral body fractures are reported to be burst fractures, of which 21% of those are incomplete.

A burst fracture is the consequence of spinal compression. It is characterized by a comminuted fracture of the upper endplate associated with depression of the anterior column and bursting of the middle column (3-5 fragments); conventionally the central fragment is within the spinal canal and encounters the spinal cord (above L1) or roots of the cauda equina (below L1) via the dura mater [2]. Magerl et al. [2] Firstly introduced the classification of AO comprehensive fracture in 1994 after analyzing a total of 1445 thoracolumbar vertebral fractures. Fractures of the compression type were classified as type A fractures. Type A1 and A2 fractures denoted as the involvement of anterior column and sparing the posterior cortex. Type A3 fractures were burst fractures that involved additionally the posterior cortex. Those fractures, where only the upper or lower half of the vertebral body has burst while the other half remains intact, are subclassified as incomplete burst fractures, type A3.1 [2].

Retropulsed bone fragments (RBFs), located above the basivertebral foramen (BF), in the posterior wall of the vertebral body, and in the median sagittal plane between the two pedicles, typifies thoracolumbar burst fractures. BF provides a pathway for blood vessels to penetrate the vertebral body and may induce local weakness in the posterior vertebral wall, leading to excessive stress concentrations. Together with flexion injury, RBFs are accompanied with compression force and had significant role in estimating nerve injury, vertebral canal occlusion, fracture stability, and posterior longitudinal ligament rupture [12]. Most RBFs including all or part of the upper surface of the basivertebral foramen mean that it may be a potential risk in thoracolumbar fracture involving an RBF. We believe that the burst fracture happened in our case had identical pathophysiology.

Osteoporosis is a major underlying reason for vertebral fractures. Osteoporotic vertebral compression fractures have a prevalence of approximately 25% among all postmenopausal women [13]. Patients with severe osteoporosis can occur as a result of minimal trauma, such as bending forward, twisting, lifting objects, and even sitting from a standing position onto a low chair [14]. The acute vertebral fragile fracture (VFF) is the prime point, presenting as a long-lasting, severely painful, and disabling situation. A study has shown that health-related quality of life is considerably lower compared with controls up to 7 years after fracture. Besides, these patients experience increased fear of pain and falling, as well as decreased selfesteem. Pain reduces physical activity initiating muscle wasting/atrophy, weakness and further acceleration of bone loss. Most patients sustaining a VFF will have mild to moderate symptoms, however a significant proportion develop substantial pain and disability and require hospitalization, like our case. Generally, hospitalized patients have a tendency to be more elderly, frail, and have co-existing comorbidities [14]. Our patient had same problem, that’s why she had to stay four more weeks.

Based on Taiwan insurance database, a recent study regarding osteoporosis and associated fracture determines the prevalence of diagnosed osteoporosis increased with age, with the highest rate aged 80 and older. At the age of 70-79 years old, the prevalence for females was about 4500 per 100000 persons between 2009 to 2013. In contrast, the prevalence for male in the same group was about 1100 per 100000 persons. Besides, major osteoporotic fracture incurred significant increases in direct medical costs in both men and women in all age groups [15].

Cauda equine was usually compressed by herniated disc, but our case present an unusual condition with abutting compression by a bratpfannen-like deformed vertebra in L2 resulted. We believe the meanings of those images are different from conventional concept when we facing such unusual representations.

Copyright: Chang ST, et al. ©2019. This is an open-access article distributed under the terms of the Creative Commons Attribution License, which permits unrestricted use, distribution, and reproduction in any medium, provided the original author and source are credited.