Benign Subcutaneous Emphysema of the Upper Extremity after Unsuccessful Venous Catheterization: Report of a Case

An 88-year-old male was admitted to the internal medicine department of our hospital due to hypochromic microcytic anemia. From his medical history, weakness during the previous 7 days was reported and also two strokes, 9 months and 5 years ago respectively. No other diseases, allergies, surgical operations or medication were mentioned. During the five first days of hospitalization he received 4 units of packed red cells and 1 unit of fresh frozen plasma. On the fifth day gastroscopy revealed a deep ulcer on the posterior wall of the duodenal bulb. The next day the patient received one more unit of packed red blood cells through a new 20 G peripheral intravenous catheter on the left arm after two unsuccessful attempts of peripheral vein catheterization on the same place due to brittle veins. During the transfusion the patient became feverish (39.0º C) with chills. The transfusion was stopped immediately and the venous catheter was removed. No evidence of hemolysis was present. Cultures taken from the transfusion bag and venous catheter were negative. There was no indication of respiratory system or urinary tract infection.

Inflammation appeared on the left elbow and forearm arround the site of venous catheterizaion with redness, swelling, heat, pain and tenderness without palpable crepitation. Full blood count revealed remarkable leukocytosis (white blood cells count 26.03 K/μl, neutrophils 92.8%, lymphocytes 3.5%, monocytes 3.6%, eosinophils 0% basophils 0.1%). An emergency US of the left upper extremity was ordered. It revealed extensive edema of the soft tissues, including muscle bellies, of the left arm and forearm and extensive gas bubbles in the subcutaneous tissue of the left forearm flexor surface (Figure 1). Additionally, it revealed a superficial venus thrombosis of the left arm extending to a perforating vein. No deep venus thrombosis or abscess of the left upper extremity were observed. An X-ray confirmed the subcutaneus emphysema in the middle of the left forearm (Figure 2). The patient was empirically treated with Ampicillin Sodium + Sulbactam Sodium (2000 mg + 1000 mg)/6 h IV for four days, which was then altered in Clindamycin 600mg/6 h IV and Ciprofloxacin 400 mg/12 h IV. The patient responded well after the alteration of the parenteral antibiotics. Five days after the initial imaging the patient was afebrile, the signs of inflammation had resolved significantly and the full blood count was normal. On that day, a second US and X-ray examination was conducted. The US revealed significant improvement of the previous findings while no subcutaneous emphysema appeared on the X-ray. The patient was discharged home on the ninth day after the appearance of the subcutaneous emphysema with oral antibiotic therapy. 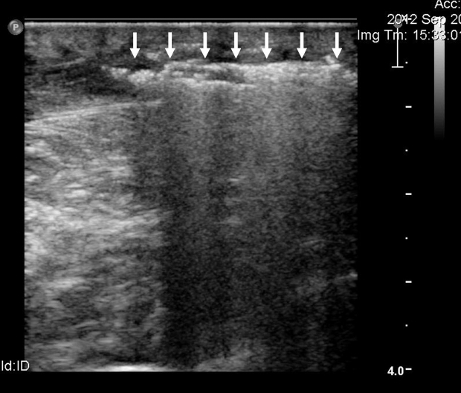 Figure 1: Ultrasound imaging of the subcutaneous emphysema. Air within the soft tissues appears as a hyperechogenic signal with hypogenic shadow (arrows). 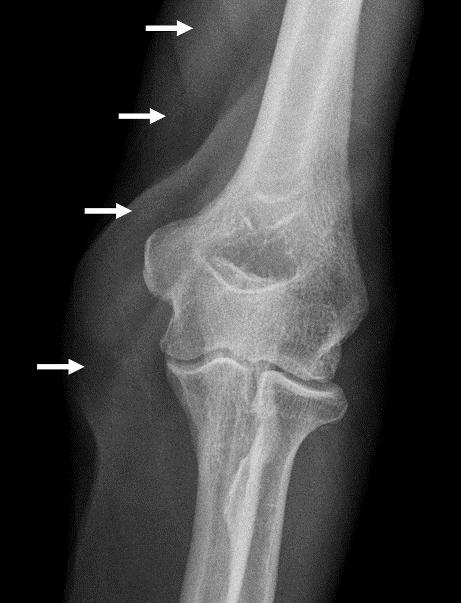 Figure 2: X-ray imaging of the subcutaneous emphysema. Air within the soft tissues of the elbow (arrows).

Subcutaneous emphysema in the upper extremity may be caused either by bacterial infection, such as gas gangrene [clostiridial myonecrosis-necrotizing fasciitis (NF)] or crepitant infection by other gas producing bacteria (anaerobic streptococci and coliform bacteria), or non-infectious, benign, causes. NF is associated with high mortality rates, 21.9% [5]. Early diagnosis is crucial as delayed management results in worse prognosis. It usually appears with inflammation signs around the infected area. Significant oedema, erythema, calor, pain, especially on palpation, and dysfunction, if it affects joints, are observed. Gas forming bacteria need around 12-18 hours to cause palpable crepitus. Although it is characteristic, is not pathognomonic and it is clinically detectable in 12% to 36% of patients with NF [6]. Beyond the regional signs and symptoms, fever, increased white blood count, systematic upset, early organ failure and septic shock may co-exist. However, clinical diagnosis is incorrect in 64% of the cases [7]. Subcutaneous emphysema is seen on plain X-ray in 17% to 57% of patients [6]. CT and MRI are frequently used in suspicion of NF. Nevertheless, both have high sensitivity and low specificity for NF. Although the appearance of NF in US has rarely been reported in the literature, it is a useful tool for early diagnosis of NF [8]. US have a sensitivity of 88.2% and a specificity of 93.3% in the diagnosis of NF [9]. Indicative findings for NF include thickening of the deep fascia, diffuse thickening of the overlying fatty tissue, increased echogenity of the subcutaneous tissue, and a fluid layer of at least 4 mm in thickness along the deep fascia. Gas within the soft tissues, especially within the muscle bellies, and fluid spaces tracking along the deep fascia are pathognomonic [8]. The treatment of NF includes high doses of antibiotics and extensive wound debridement with wide surgical excision of necrotic lesions after immediate surgical exploration [5].

There are not specific symptoms and signs for benign subcutaneous emphysema. It usually appears with palpable crepitation, within 6 hours from the mentioned trauma, swelling and minimal pain of the affected area [1-4]. Most times there are no signs of inflammation, local adenitis and systematic symptoms such as fever, shock or organ failure. White blood count is not increased and cultures collected are negative. However, a case with minor local inflammation and significant increase of pain has been described in the literature [3]. The imaging findings are similar to those of NF but in the benign subcutaneous emphysema X-ray air is confined to the superficial tissues and respects the tissue planes and fat pads, [2-4] while in the US there is no air within the muscle bellies [4]. According to the literature for benign subcutaneous emphysema conservative treatment with intravenous or oral antibiotics and close observation is recommended, rather than immediate surgical intervention [1-4].

Clavijo-Alvarez JA et al. suggest an algorithm [1] for the diagnosis and treatment of benign subcutaneous emphysema. Diagnosis is set according to history (timing, general symptoms, pain) and physical examination (hemodynamic parameters, oedema, skin discoloration, odour, functional limitation, and crepitus. Supportive diagnostic tools are the complete blood count, wound cultures (aerobic and anaerobic) and imaging. They suggest plain radiographs and computed tomography if there are any changes in the physical examination. However, US could also be a useful tool for early diagnosis and differential diagnosis of subcutaneous emphysema [8]. As for the management Clavijo-Alvarez JA et al. propose hospitalization for observation, serial examinations and monitoring vital signs for systemic infection. They also suggest irrigation of the injured area with saline solution, wrapping with elastic bandages and change dressings every 6 hours. Tetanus vaccine or immune globulin administration is recommended depending on vaccination status. The management is completed with broad-spectrum intravenous antibiotics administration for 24 hours. Finally they prefer to keep the patient non per os in case surgical intervention is indicated [1].

Mink van der Molen et al. suggests a guideline [2] in treating patients with subcutaneous emphysema. For nonimmunocompromised patients without systemic symptoms, such as chills or malaise, who report minimal pain at the site of emphysema, who are afebrile with stable and normal hemodynamic parameters (pulse, blood pressure, and respiratory rate), who have crepitus not associated with severe pain on palpation, and who are without inflammatory skin changes can be managed non-surgically. They further recommend initiation of intravenous antibiotic therapy and frequent observation over a 12 to 24-hour period. They underline that if deterioration in the extremity or in the hemodynamic status of the patient occurs, prompt surgical intervention is indicated. The highlight that the grave consequences of gas gangrene must always be considered and they recommend surgery if there is any doubt concerning the diagnosis.

In our case, we had an inflammation without palpable crepitation on the area of a venous catheter which was used to transfuse packed red blood cells. We underline that two unsuccessful catheterizations had been attempted in the same area. Subcutaneous emphysema was diagnosed via X-ray and US. These findings in addition to leucocytosis, neutrophilia and fever with chills could indicate gas gangrene. However, in the US the absence of air bubbles within the muscle bellies, abscesses and fluid spaces tracking along the deep fascia forced us to think about the possibility of a benign cause. The history of two unsuccessful catheterizations could explain the subcutaneous emphysema formation via the penetrating skin wounds in combination to a one-way ball valve mechanism or accidental air injection during the catheterization attempts. Additionally, the presence of superficial venous thrombosis could justify a temperature increase with leucocytosis and neutrophilia. A further temperature increase with chills could also be associated to a febrile non-hemolytic reaction because of the repeated transfusions [10]. The absence of characteristic imaging findings, the absence of positive blood cultures, the disease course and the response to the conservative treatment confirm the benign non-infectious causes of the subcutaneous emphysema in our case.

In conclusion, subcutaneous emphysema is not always associated to gas gangrene. Symptoms and signs may be misleading. X-ray imaging is a useful tool for the clinician but US may help in early diagnosis and differential diagnosis in order to avoid unnecessary surgical exploration.

CONFLICT OF INTEREST: no conflict of interest to report.