The increased desire of patients to salvage and maintain their dentition has forced conservative and regenerative dentistry to conserve the teeth in the mouth which are planned to be removed. Thus periodontally compromised teeth with severe vertical bone loss and furcation invasion may well be retained of their roots. In this case report bicuspidization of the left first mandibular molar with bone graft and Platelet Rich Fibrin (PRF) membrane and subsequent prosthetic treatments are presented.

The treatment and management of mandibular molar teeth exhibiting furcation invasions (FI) may involve restorative dentistry, endodontics and periodontics, so that the teeth are retained in whole or in part. Such teeth can be useful as independent units of mastication or as abutments in simple fixed bridges. Thus tooth separation and resection procedures are used to preserve as much tooth structure as possible rather than sacrificing the whole tooth [1].

The furcation defects vary from a subtle loss of attachment in the buccal furcation area, forming a shallow pocket, to advanced pathology with deep pockets > 10 mm, advanced bone loss and clinical exposure of the furcation [2-4]. In the mandibular molars, grade III defects are managed by tunnelling procedures, hemisection and bicuspidisation along with open flap debridement [2, 5 ,6].

REVIEW OF LITERATURE
Bisection or bicuspidization is the separation of mesial and distal roots of mandibular molars along with their coronal portion, where both segments are then retained individually [12, 13].

The following table summarize the indications and contraindications for bicuspidization:

Endodontic therapy is performed initially, and during the open flap debridement procedure, the bicuspidization is done and the tooth is restored with a post-endodontic restoration, keeping in mind that the restoration allows for optimal plaque control in the space between the separated roots [2, 14-17].

A 31-year-old male presented with the complaint of pain of left mandibular first molar with slight mobility. On examination, the tooth was sensitive to percussion. On probing the area, there was a 9-mm-deep periodontal pocket around the mesial aspect of the furcation area (Figure 1). 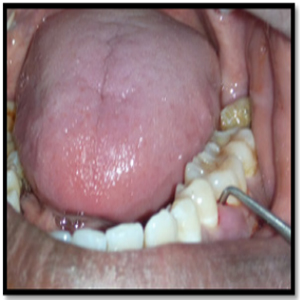 On radiographic examination, severe vertical bone loss was evident at the mesial aspect of the furcation area. The bony support of distal root was completely intact but at mesial roots level was compromised due to presence of deep infrabony pocket (Figure 2). 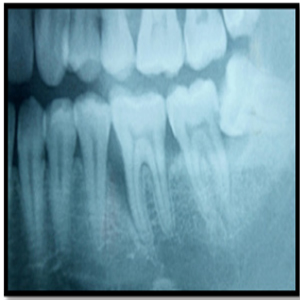 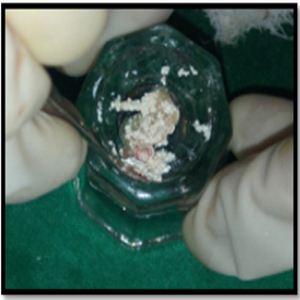 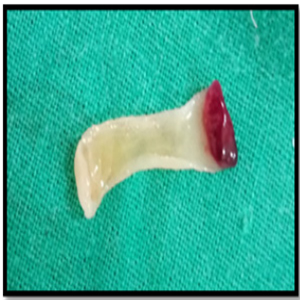 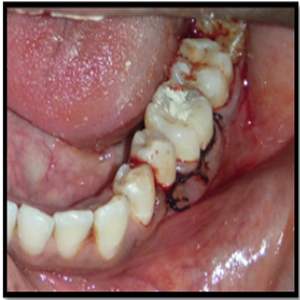 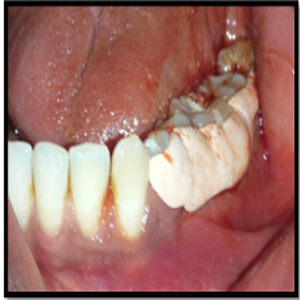 All faces of the mesial and distal roots were instrumented and the spurs were smoothened with aerotor. After thorough curettage of the mesial vertical osseous defect and irrigation with saline solution, the bone graft (DM-Bone) was placed in the defect and condensed followed by coverage with patient's PRF membrane. The flap was repositioned and sutured and a periodontal dressing was given. (Figure 7-8). 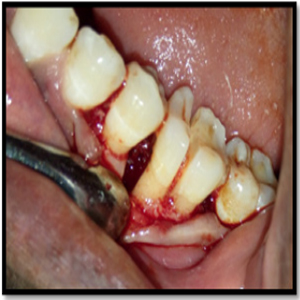 Six weeks after surgery, the dissected portions were prepared for a splinted stainless steel restorations and each dissected parts of the tooth was crowned as a premolar tooth (Figure 9). The patient was followed at 3, 6, 12 and 24 months after surgery, and clinical measurements and radiographies were recorded.

Management of deep infrabony pocket, encroaching root apex of posterior teeth along with furcation involvement, always presents a challenge to the periodontist. Non-surgical management alone leads to failure due to inaccessibility of the base of the pocket and the furcation region, leading to an incomplete removal of the plaque and plaque retentive factors [2, 18, 19]. The clinician splits the mandibular molar vertically through the furcation, without removing either half, leaving two separate roots that then are treated as bicuspids (a procedure termed “bicuspidization”).

Farshchian and Kaiser [20] have reported the success of a molar bisection with subsequent bicuspidization. They stated that the success of bicuspidization depends on three factors: 1. Stability of, and adequate bone support for, the individual tooth sections; 2. Absence of severe root fluting of the distal aspect of the mesial root or mesial aspect of the distal root; 3. Adequate separation of the mesial and distal roots, to enable the creation of an acceptable embrasure for effective oral hygiene.

According to Newell [21], the advantage of bisection is the retention of some or all the tooth structure and the disadvantage is that the tooth has to undergo endodontic therapy. Not many studies have been cited in the literature regarding the use of bicuspidised molar teeth as a viable abutment for a fixed partial bridge. The role of endodontic care prior to bicuspidization procedure has a long history and it has remained today as a necessity in treating furcally involved mandibular molars. However, failure to perform endodontic treatment first is not a contraindication for root resectioning if it can be determined that a successful root canal filling is practical and possible.

The treatment for deep infrabony pocket (vertical bone loss) requires the use of various regenerative procedures but PRF belongs to a new generation of platelet concentrates geared to simplify preparation without biochemical blood handling. PRF is considered as a fibrin biomaterial. Its molecular structure with low thrombin concentration is an optimal matrix for migration of endothelial cells and fibroblasts. It permits a rapid angiogenesis and an easier remodeling of fibrin in a more resistant connective tissue. Therefore, these PRF membranes can be used for all types of superficial cutaneous and mucous healing. Not only is it a simple fibrin membrane but also a matrix containing all the molecular and cellular elements permitting optimal healing. The matrix carries all the favorable constituents present in a blood sample. That is why this biomaterial can be considered a physiological concentrate. It is obtained without any addition or manipulation. A case was provided successful treatment of dehiscences with PRF and autogenous bone graft at the implant dehiscence site which could be compared to the regeneration required in our case [22].

Bicuspidization may be an apt alternative to extraction and implant therapy and should be discussed with patients during consideration of treatment options. With recent refinements in endodontics, periodontics and restorative dentistry root separation and resection have received acceptance as a conservative and dependable dental treatment and the functional needs have been adequately met with by such treated teeth.