A case is described of a 58-year-old gentleman who presented to a community emergency department with an acute infero-posterior wall ST-elevation myocardial infarction (STEMI) and a third-degree atrioventricular block. Since there was a delay in transporting the patient to a percutaneous coronary intervention (PCI) for definitive management, a decision was made to administer thrombolytics. Upon re-evaluation of the case, a conversation ensued whether or not a priority existed for transvenous pacemaker placement prior to administering thrombolytics.

A 58-year-old male presented to a community emergency department for evaluation of intermittent retrosternal nonradiating chest pain which had been mild over the past 2 days, but significantly worsened this morning. Review of symptoms was notable for diaphoresis and nausea, but without dyspnea, syncope, cough, fever, or emesis. There had been no history of similar. The patient's medical and surgical histories were negative (largely because he hasn't seen a physician in 20 years). He had a 35 pack-year history of tobacco abuse. The initial vital signs were 123/62 mmHg, heart rate 43, beats/minute, respiratory rate 18 breaths/minute, oxygen saturation of 92% on ambient air, and a pain score of 8 out of 10. An electrocardiogram (ECG) was obtained immediately and showed an acute infero-posterior wall STEMI in the presence of a third degree atrioventricular block (Figures 1). A right-sided ECG was subsequently performed, confirming right ventricular extension with ST elevations in V3r and V4r.
He was given aspirin 325 mg oral, clopidogrel 300 mg oral, atorvastatin 80 mg oral, ondansetron 4 mg intravenous, morphine 4 mg intravenous, 2 liters of normal saline, and weightbased heparin bolus and drip was initiated. Given that transfer to the local cardiac catheterization center, including arranging transport units, takes over 90 minutes, a weight-based dose of tenectaplase was administered to remain within the door-toneedle time. The patient's blood pressure fell to 87/54 mmHg, heart rate remaining in the low-40s beats/minute; dobutamine was initiated. He was mentating at all times, diaphoresis had resolved, and pain was controlled. A repeat ECG was done prior to his departure to a tertiary care center (Figure 2). In retrospect, all of the laboratory data (including blood counts, metabolic panel, and cardiac biomarkers) were all within the normal range. A portable chest X-ray showed minimal pulmonary congestion. 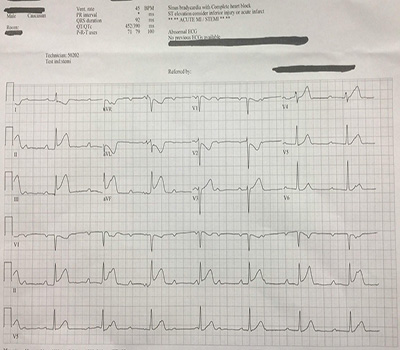 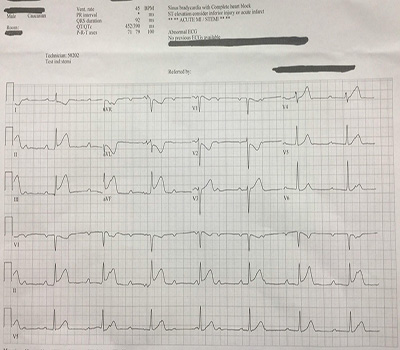 He reached the catheterization lab promptly and without incident. The right coronary artery was found to be 99% occluded. Two coronary stents and a permanent pacemaker were placed. The post-catheterization course had been benign.
Upon review of the case and further discussion with other emergency physicians and cardiologists, a debate ensued regarding the necessity for temporary transvenous pacemaker placement prior to transfer. "We are sending a critical patient with a very tenuous rhythm out of our department, what if the rhythm decompensates on the highway in the back of an ambulance?"

Briefly, atrioventricular blocks are relatively common in the context of myocardial ischemia. Inferior wall infarctions are usually supra-Hisian in origin, transient, have a narrow QRS escape rhythm, and carry a low risk of mortality. Anterior wall infarctions, on the other hand, are usually infra-Hisian, have a wide QRS escape rhythm, and carry a much higher mortality rate (up to 80%!) because of the extent of myocardial damage. Conduction abnormalities in the context of ischemia overall carry a significantly higher risk of mortality, even after the introduction of thrombolytics several decades ago. Long-term prognosis is directly related to the degree of heart failure, hemodynamic compromise, and amount of damage to the myocardium.
The priority for invasive management of old infarcts with angioplasty over thrombolysis has been enumerated in multiple large studies and reviews. Since percutaneous interventional capabilities were not readily available in this facility, the initial thought process followed as such: time = myocytes, break the underlying obstructive lesion in the hopes of relieving the subsequent conduction problem (there was no reports of syncope or other relevant history to signify a primary heart block in addition to an infarct). The opposing argument emphasized the fragile nature of transcutaneous pads (which we had placed immediately upon noticing the heart block) and a need for better stabilization for transfer (i.e. transvenous pacing). The door-to-needle window for giving thrombolytics would almost certainly be missed had a transvenous pacemaker been placed. A final alternative was briefly entertained: give thombolytics and then place a transvenous pacemaker as carefully as possible, however this would have certainly delayed the transfer process.
Third-degree atrioventricular heart blocks are commonly seen with inferior wall myocardial infarctions, and usually resolve in hours-to-days after revascularization. Right coronary artery occlusion is usually implicated as it vascularizes the AV nodal artery. Several theories as to the exact pathophysiology have been put forth, including ischemic metabolites, increased parasympathetic activity, and ongoing ischemia and necrosis to the conduction system. The incidence of complete blocks has dropped precipitously with the introduction of thrombolytics (3.7%, from 5.3% in one study), thus obviating the need for permanent pacemaker placement in a majority of patients. Current guidelines from American and European consortiums offer recommendations of permanent pacemaker placement in specific situations of coronary artery disease in the longer term, but don't mention the utility of temporary pacemakers in the hyperacute stages we usually encounter in the emergency department. For example, the European Heart Rhythm Association offers level Ib evidence in support of permanent pacemaker placement if there is a persistent third-degree heart block. Furthermore, much of the current recommendations are derived from dated literature and poorly conducted studies. One of the most relevant studies (Clemmensen, 1991) specifically looked at complete heart block in inferior MIs after giving thrombolytics within 6 hours of symptom onset. They found that, in the group that received thrombolytics, patency rates were improved and long-term mortality rates were similar, but had higher rates of complications (e.g. re-occlusion, ventricular dysrhythmias, pulmonary edema) and overall inhospital mortality. The following year, another study (Berger, 1992) looked at this subset of patients from the TIMI II trials who received thrombolytics within 4 hours of symptom onset, and found higher rates of cardiogenic shock and 21-day mortality in patients that presented with complete heart block as opposed to those who developed it after admission.

The morbidity and mortality of acute coronary syndrome cannot be overstated. Here, we present a case of an acute infarct in the context of a malignant conduction abnormality requiring transport to another facility for definitive cardiac care, and raise a question of whether or not the primary emphasis should have been placed on opening the obstructive vascular lesion versus pacifying the secondary electric abnormality prior to transfer, especially in the setting of a potentially decompensating patient. Since the majority of emergency departments in this country do not have immediate catheterization capabilities, there remains a need for a homogenous management protocol. This case also brings to light other interesting discussion points, such as the medicolegal ramifications had this patient decompensated en route to the accepting facility, the necessity to follow established guidelines (e.g. door-toneedle and balloon times) in the not-so-straightforward patients, and how to reconcile differing management priorities from the emergency and cardiology perspectives.