Sustained ventricular tachycardia (VT) is a life threatening arrhythmia that usually occurs after myocardial infarction (MI). Although conventional anti-arrhythmic therapy is often effective, some cases require additional measures such as myocardial revascularization or radiofrequency catheter ablation. Only few cases of intractable ventricular arrhythmia requiring emergent percutaneous coronary transluminal angioplasty (PTCA) have been reported [1- 5]. To the best of our knowledge, all those reported cases involved an infarct-related artery (IRA) in the early phase of acute MI. In contrast, this report describes a case of intractable VT several years after MI, which responded favorably to a successful angioplasty of a non-infarct related artery. However, VT recurred concomitantly with restenosis.

A 64 year-old male patient with a long history of smoking was admitted to our coronary care unit for mild chest pain and palpitation related to monomorphic apical left VT with a right bundle branch block pattern and a superior axis (Figure1). All combinations of anti-arrhythmic therapy including intravenous administration of lidocaine, amiodarone and propranolol failed to restore sinus rhythm that was obtained only after electrical shock. There were no changes of ischemia or reinfarction on the electrocardiogram (ECG). 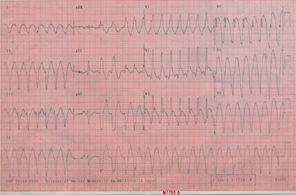 The patient had sustained fourteen years earlier an anterior MI lately presented complicated by left ventricular failure. At that time, a coronary angiogram showed a tight stenosis of the proximal left anterior descending (LAD) artery; however, the left circumflex (LCX) and right coronary (RCA) arteries appeared normal. A left ventricular angiogram as well as an echocardiography revealed a total akinesis of the anterior wall thus no primary stenting was performed on the LAD.
Four years later, he returned with symptomatic premature ventricular contractions (PVC’s) that responded favorably to amiodarone. Nevertheless, the patient subsequently failed to continue this treatment, presumably because of his significantly clinical improvement, and two years later, the current episode occurred.
During his hospitalization, the patient had 20 episodes of VT of the same pattern and all required electrical cardioversion. A coronary angiogram during which two episodes of VT occurred showed that the LAD was occluded at the proximal segment. In addition, there was a severe thrombotic stenosis of the mid RCA (Figure2A); however the LCX remained normal. There were no collaterals developed to the LAD. Left ventricular angiogram showed a markedly dyskinetic anterior wall with an ejection fraction of about 30%. The decision to perform an aneurysmectomy with a bypass graft to the RCA and surgical treatment of VT was turned down by the surgeons who considered such a procedure a very risky one.
As an alternative, a successful balloon angioplasty of the RCA was performed (Figure2B) since it was a very thrombotic lesion without a real tight plaque under. It resulted in the non-recurrence of VT. Shortly thereafter, the patient was discharged on amiodarone, low dose propranolol, ACE inhibitor and Aspirin. 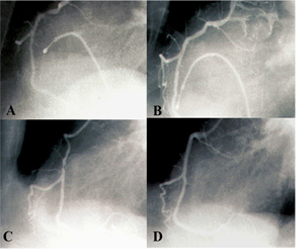 As an alternative, a successful balloon angioplasty of the RCA was performed (Figure2B) since it was a very thrombotic lesion without a real tight plaque under. It resulted in the non-recurrence of VT. Shortly thereafter, the patient was discharged on amiodarone, low dose propranolol, ACE inhibitor and Aspirin.
Four months later, the patient returned with palpitation and chest pain related to a recurrent episode of sustained VT of the same pattern than the previous episodes.
Although the first such event responded favorably to a loading dose of intravenous amiodarone and lidocaine, the four following episodes required electrical cardioversion.
A coronary angiogram revealed restenosis of the mid-RCA lesion (Figure2C). A repeat dilatation with stenting was successfully performed and allowed the weaning of the patient from intravenous drug treatment. No episodes of VT occurred in the three days after stent placement and the patient was discharged on amiodarone, propranolol, nitrates, aspirin clopidogrel, and statin.
Ever since, the patient was asymptomatic with no restenosis on the coronary angiogram that was performed seventy eight months after the stenting procedure (Figure 2D).

This case illustrates that arrhythmia can be a primary manifestation of unstable angina as it was the only indicator of a significant lesion of the RCA in this patient. Arrhythmia was also the only indicator of restenosis few months after a successful balloon angioplasty procedure that prevented the recurrence of VT.
We propose that VT occurred several years after acute MI because the infarct-related artery (the LAD) was initially open, although severely stenosed as shown on the first angiogram performed soon after MI. Nevertheless, by the time the LAD became totally occluded, presumably months or years later, the anterior wall received blood flow through collaterals from the RCA that was free from any significant lesion at that time. Subsequently, a stenotic lesion developed in the RCA, which in turn compromised the collateral flow to the anterior wall. This series of events led to the occurrence of VT.
Ventricular tachycardia in the chronic phase of myocardial infarction is generally due to a mechanism of intramyocardial reentry related with the infarction scar. Although in some cases ischemia can act as a trigger in this context, it normally does not have a primordial role in its appearance, which is why adequate revascularization or treatment with antianginal drugs does not control the risk of recurrence [6]. In these cases, antiarrhythmic treatment is focused on modifying the electrophysiological properties of the reentry circuit pharmacologically (by acting on sodium or potassium channels) or by radiofrequency ablation or surgical interruption.
The concept of increasing electrical stability of the plaque by restoring flow into an infarcted myocardium is gaining wider acceptance [7]. This case is a clear illustration of the “open artery hypothesis” according to which the restoration of the IRA patency even late after acute MI reduces the likelihood of complex arrhythmia [8]. However, in this specific case, restoration of flow did not involve the IRA itself but rather the artery that provided collateral blood flow to the infarct region. Surgery in that particular setting would have been an interesting alternative, consisting of left ventricular aneurysmectomy, bypass to the RCA and surgical treatment of VT. However, such a surgery carries an operative mortality of about 10 to 20% [9-11]. Automated implantable cardioverter would have been also an alternative, but without a revascularization procedure, this would not be an effective approach [12, 13].
Because of the special indication of PTCA in this particular case and although a satisfactory result of the initial balloon angioplasty procedure was obtained, a primary stenting would have been a better approach as the likelihood of restenosis is certainly lower [14, 15].
The adjunction of amiodarone to a low dose of beta blocker has certainly played a role in the enhancement of electrical stability in this patient. A study by Ogunyankin has clearly demonstrated the benefit of such an association particularly in patients with high risk for malignant arrhythmia [16].
Implantable cardioverter defibrillator (ICD) devices have improved prognosis in patients with low left ventricular ejection fraction (LVEF) and ventricular tachyarrhythmia. However, these devices are not capable of preventing recurrences of VT appearing in up to 70% of patients [17]. In 3% to 5% of patients, electrical storm occurs, often many years after infarction [18]. ICD shocks are painful, and repeated appropriate ICD shocks are an increasing clinical problem requiring hospital admission and are accompanied by anxiety and depression in more than 50% of patients [19]. ICD shocks require high voltage, and frequent shocks lead to premature depletion of the ICD battery and early device replacement.
Catheter ablation reduced the frequency and persistency of VT and the beneficial effect of catheter ablation in the patient with frequent ICD interventions is obvious, but an important question remains unanswered: Should every patient with VT(s), an old myocardial infarction, and an ICD undergo a catheter ablation to improve the prognosis? [17, 20].
We think that an appropriate revascularization of an infarcted region with an association of low dose betablocker and amiodarone could be an effective alternative to cardiac implantable defibrillator in post MI patients at high risk for malignant arrhythmia.

Myocardial ischemia can have an important role in monomorphic recurrent ventricular tachycardia. Conventional antiarrhythmic treatment can be ineffective, for that reason, coronary revascularization must be the primordial goal and may constitute definitive therapy.