A Rare Cause of Pediatric Respiratory Distress: Congenital Lobar Emphysema. A Case Report

Congenital lobar emphysema (CLE) is a rare congenital abnormality of the lung characterized by hyperinflation of one of more pulmonary lobes with compression of the surrounding structures, causing respiratory distress. Its prevalence is one in 20,000-30,000 live births, being more frequently observed in newborns and young infants' males. Diagnosis of CLE is based in high level of suspicion and established by combined clinical, radiological and histological findings. Radiological studies include chest X-ray and chest computed tomography, which show distension of the affected lobe and mediastinal displacement. Surgical treatment is required in patients with respiratory distress. However, conservative treatment may be an option in cases with no or minimal symptoms.

We report a case of a nine days old boy affected with respiratory distress and poor feeding. Physical examination showed reduced breathing sounds on the right side as well as mild intercostal and subcostal retractions. Blood test was performed revealing any disturbs. To complete the study, a chest X-ray and chest computed tomography were performed showing a right middle lobe hyperinflation causing mediastinal shift to the left. With the diagnosis of congenital lobar emphysema, resection of the emphysematous lobe was done without complications. Histopathology report was consistent with the initial diagnosis.

Congenital lobar emphysema (CLE) is a rare congenital abnormality of the lung characterized by hyperinflation of one of more pulmonary lobes with compression of the surrounding structures [1, 2]. Prevalence of this condition is one in 20,000- 30,000 deliveries, being more frequently observed in newborns and young infants' males [2-4]. Cases reported are usually sporadic, but family association has been also described [5, 6]. Diagnosis of CLE is established by combined clinical and radiological findings [7]. Hereby, we summarize a case report of a nine days old boy diagnosed of congenital lobar emphysema with a short review of the literature.

A nine days old boy patient was admitted in the Emergency Department affected of respiratory distress and referring poor feeding. The clinical onset of the disease was two days before admission, with progressive worsening.

Personal history showed that he was the first child from a physiological pregnancy, born at term by C-section, with birth weight of 3605 g, and his Apgar scores were 9 at one minute and 10 at five minutes.

Physical examination revealed breathing sounds reduced on the right side, with mild intercostal and subcostal retractions. The child was alert and active. Abdominal exploration did not reveal any disturbs.

A blood test was performed revealing any disturbs in complete blood counts, as well as serum biochemistry profiles. Venous gas showed pH 7.42, pCO2 of 52 and BE 7.6. To complete the study, an echocardiography was realized, excluding congenital cardiac malformations. A chest X-ray was performed showing hyperinflation in the right upper and middle zone, with mediastinal shift to the left (Figure 1). Due to these disturbs, a chest computed tomography was realized, detecting right middle lobe hyperinflation, causing mediastinal displacement to the left (Figure 2). 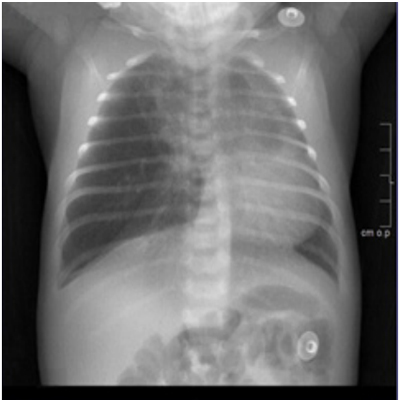 Figure 1: Chest X-ray showing hyperinflation in the right upper and middle zones, with mediastinal shift to the left. 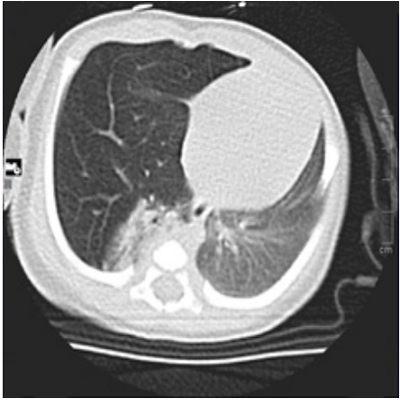 Figure 2: Computed tomography showing hyperinflation of right middle lobe, with complete atelectasis of the right lower lobe and mediastinal displacement to the left.

With the diagnosis of CLE, resection of the emphysematous lobe was done by video-assisted thoracic surgery, with no complications. The child was extubated on the third postoperative day and discharged 1 week later without disturbs. Histopathology report was consistent with congenital lobar emphysema. A year after the resection, the boy is asymptomatic, with an adequate pondoestatural growth.

CLE is also known as infantile lobar hyperinflation and it is a rare entity caused by an anomaly of lung development characterized by progressive overinflation of one or more lung lobes. This hyperinflation is caused by air trapping and it results in distension of the affected lobe, causing a mass effect that may compress the remaining lobes and nearby structures, generating mediastinal shift and hemodynamic changes [8].

Clinical presentation varies widely, from mild tachypnea to severe respiratory distress with acute respiratory failure or recurrent pulmonary infections. Respiratory distress is caused by the massive overdistension of the affected lobe compressing surrounding structures and it worsens progressively with the passing of days as a result of increased lung hyperinflation [8, 9], like our case reported. Clinical manifestations are more often detected in the newborn period and early infancy [10], however, some patients may remain asymptomatic for years, diagnosing some cases in adulthood [11, 12].

In prenatal period, congenital lung malformations may be diagnosed by ultrasound [21], but most cases are diagnosed after birth. The correct diagnosis depends on a strong clinical suspicion [22, 23] and it is made by the combination of clinical, radiologic and histologic findings. Chest X-ray may show hyperinflation of the affected lobe and mediastinal displacement, with compression and atelectasis of the contralateral lung. Additional imaging investigations are usually needed to confirm the diagnosis, including chest computed tomography [4]. CHD are the most frequently associated with CLE, so echocardiography should be done in these patients to exclude any defects [9]. In our patient, complementary examinations did not show associated malformations.

Differential diagnosis of congenital lobar emphysema is established with other entities causing respiratory distress in neonates and infants, such as foreign body aspiration, pneumothorax and other lung malformations [24].

The classical treatment for CLE is surgery in most cases because this ensures compensatory lung growth. However, moreand more studies show that CLE can be managed conservatively in some cases. The choice of the more appropriated treatment depends on severity of respiratory distress [7]. In patients with significant respiratory distress it is indicated to perform surgical treatment consisting in resection of the affected lobe [17, 25]. Because of the symptoms showed by our patient, lobectomy was done in this case. Asymptomatic patients may be treated conservatively but should be closely followed-up because they may require surgery in cases of worsening respiratory distress [2, 9, 21, 25-28].

In conclusion, congenital lung abnormalities should be considered in the differential diagnosis of a patient leading with respiratory distress. Although the most frequent is that CLE manifests in neonatal period, congenital lung lesions may present for the first time in infancy, childhood or even in adulthood. A high level of suspicion is required to diagnosis because it is a rare anomaly that can be confused with other pathologies presenting with dyspnea. Afebrile infants with respiratory distress should be considered to perform a chest X-ray to early diagnosis of CLE. Traditional treatment is surgery, and it is indicated in symptomatic cases, however, conservative treatment is a reasonable option in cases with no or minimal symptoms.