The Cytomorphological Spectrum of Papillary Lesions in the Breast

The objective of this review is to illustrate the broad spectrum of papillary lesions that can be found in breast fine needle aspirations (FNAC).
Papillary tumors of the breast comprise lesions of variable morphology and include entities ranging from benign to high grade malignant. Features of papillary neoplasms invariably describe branching three-dimensional papillary clusters with delicate fibrovascular cords. Cytomorphological criteria for benign and low-grade malignant entities overlap and a definite cytological diagnosis is not always possible. Cellular papillomas may harbor areas of ductal carcinoma in situ (DCIS), atypical ductal hyperplasia (ADH) or lobular neoplasia. DCIS can be both high grade and non-high grade. Immunocytochemistry (ICC) can be helpful, providing there is adequate material for ICC. Relatively high error rates, false negatives as well as false positive diagnoses can be found. In general, papillary lesions may be recognized as such. Reporting strategies will often recommend caution if trying to differentiate benign, cellular papillomas from low-grade carcinomas.
In conclusion, papillary lesions present with a broad spectrum of cytomorphological features that are illustrated in this review

Papillary tumors of the breast comprise lesions of variable morphology and include entities ranging from benign to high grade malignant (table 1). A papillary neoplasm is histologically one that exhibits an arborescent epithelial proliferation with fibrovascular cores and is attached by a stalk to the wall of a dilated duct. They constitute < 2 % of all breast lesions.

Table 1: Papillary lesions of the breast.

Cytomorphological criteria for benign and low-grade malignant entities overlap and a definite cytological diagnosis is not always possible. Features of papillary neoplasms invariably describe branching three-dimensional papillary clusters with delicate fibrovascular cords [1-6]. Additional features of papillary carcinomas include moderate to abundant cellular material [2-4], small papillae arranged in cell balls, tall columnar cells, isolated naked nuclei and hemosiderin laden macrophages [2, 3], irregular groups of predominantly monolayered (two-dimensional) epithelium composed of small, polygonal or cuboidal cells with eosinophilic cytoplasm and rounded, eccentrically placed nuclei [2, 3, 7-19]. Features indicating a benign papillary lesion include less cell material, papillae with cohesive stalks surrounded by columnar cells in a honeycomb pattern, apocrine metaplasia, bipolar naked nuclei as well as fewer small papillae and isolated columnar cells [2, 3]. Myoepithelial cells within clusters and inconspicuous naked, bipolar nuclei in the background also indicate a benign lesion [2, 5]. Tse et al report considerable overlaps in the criteria [19] and no demonstrable quantitative differences between papilloma and papillary carcinoma (PC), but with a qualitatively higher degree of atypia in PC and more elaborate and slender papillary fragments. Haji et al found loose cohesive clusters and acinar formation of neoplastic cells to be significant parameters differentiating PC from benign papillomas [20].
Reported accuracy rates in the literature are given as 27 % - 88 % for all papillary lesions [10, 19, 21, 22] and 91 % for PC alone [18]. Prathiba et al and Jayaram et al reported a sensitivity of 42% and 73%, respectively [10, 15] and a specificity of 88.3 % [23]. Relatively high error rates, false negatives (FN) as well as false positive (FP) diagnoses are reported [11, 15, 18, 19].
Not all lesions diagnosed as papillary on cytology are papillary on histology, the most common error being fibroadenomas and fibrocystic changes (10, 18, 21, 24) but in general, papillary lesions can be diagnosed as such [2, 6, 7, 10, 12, 21].
The known and reported criteria of papillary lesions are almost exclusively based on conventional smears. Many institutions now use liquid based preparations (LBC) alone or as an adjunct to traditional smears. Several features may change and appear different in LBC and could potentially cause both

The aim of this review is to illustrate the broad spectrum of papillary lesions that can be found in breast FNAC. 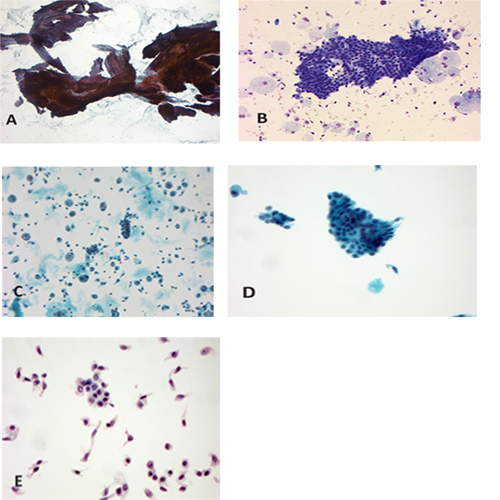 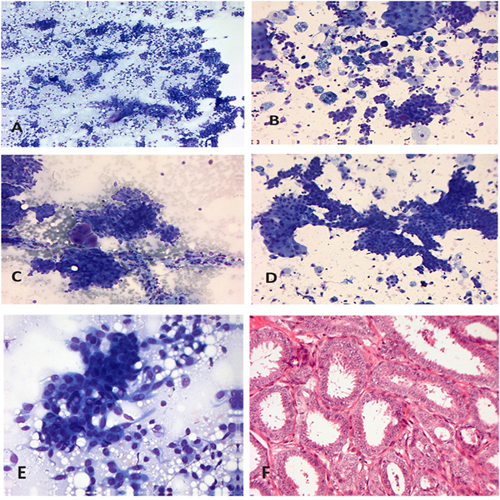 a. Magnification x 100, MGG. Cellular material with stromal fragment, irregular sheets, groups and aggregates of ductal cells as well as a single cell population.
b. Magnification x 200, MGG. Smaller groups and sheets, mixed ductal and apocrine as well as numerous macrophages. In addition a minor single cell population.
c. Magnification x 200, MGG. Cellular papilloma with threedimensional epithelial clusters and metachromatic basement mebrane-like globules
d. Magnification x 200, MGG. Complex epithelial sheets with transition from ductal to apocrine cell type.
e. Magnification x 400, MGG. Cellular polymorphism in a papilloma with extensive, but histologically benign hyperplasia. Nuclear irregularities, but uniform chromatin structure.
f. Magnification x 200, HE. Proliferative papilloma with adenosis; same lesion as 2e.
They may harbor areas of ductal carcinoma in situ (DCIS), atypical ductal hyperplasia (ADH) or lobular neoplasia. DCIS can be both high grade and non-high grade. Cells from high grade DCIS are clearly recognized as malignant [27], whereas aggregates and single cells from a non-high grade lesions may not be definitely identified in the smears. In many cases though, the atypical cells may not present in the specimens. Immunocytochemistry can be helpful, providing there is adequate material for ICC (Table 3). These cellular and heterogeneous papillary lesions should be diagnosed as equivocal/ atypical and surgically excised.

Table 3: Overview of papillary lesions and their immunophenotypes.

Florid papillomatosis of the nipple (subareolar papillomatosis) is a benign epithelial proliferation localized within and around the collecting ducts of the nipple. It comprises < 1 % of breast specimens and has an age range of 20-87 yrs (mean 43 yrs). Approximately 2/3 of the women presents with nipple discharge. Some cases may have skin erosion and mimic Paget’s disease of the nipple clinically [25]. The cytologic findings are listed in (Table 4) and they are illustrated in (Figure 3 a-g). If palpable, the clinical findings are usually very characteristic and help making a confident diagnosis. The FNAC material is moderate to abundant and can be prepared both as smears, as LBC and as cell block (Figure 4 a-e). ICC phenotype (Table 2) reveal a benign, polymorph cell composition and supports the diagnosis of a benign lesion. 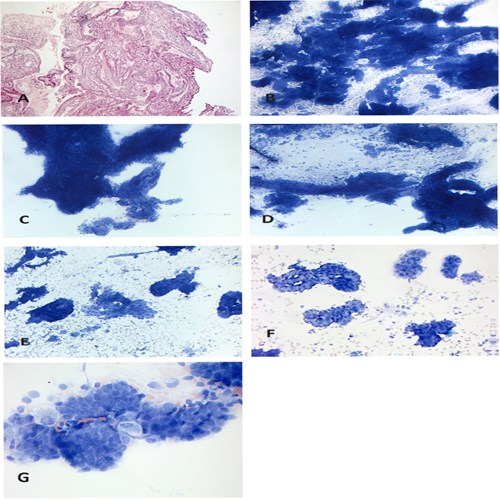 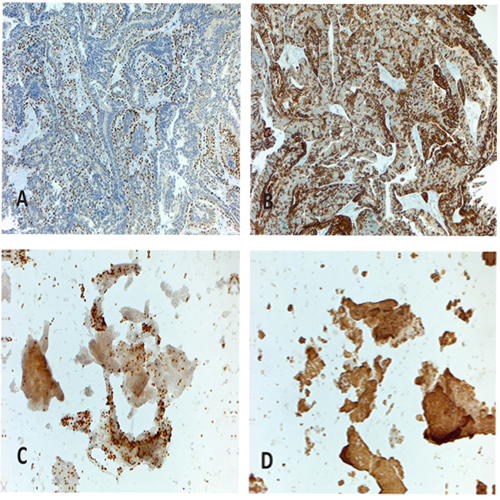 Papillary carcinoma variants
Intraductal papillary carcinoma in situ may present with a clear or blood stained nipple discharge. More peripheral lesions may present as a mass. Radiologically it can present both as a single, round and partly cystic lesion as well as micro-calcifications (as part of a DCIS) without a tumor [25]. In histology, we find ducts or TDLU (terminal duct-lobular unit) with slender branching fibro-vascular stalks covered by a single cell population of neoplastic cells (Figure 5 a-k). Micropapillary, cribriform and solid growth patterns are also seen. The papillae are lined by neoplastic, columnar cells in one or several layers. The cells are deceptively bland with low - grade atypia. The cytological findings mirror the histology and are detailed in Table 5. 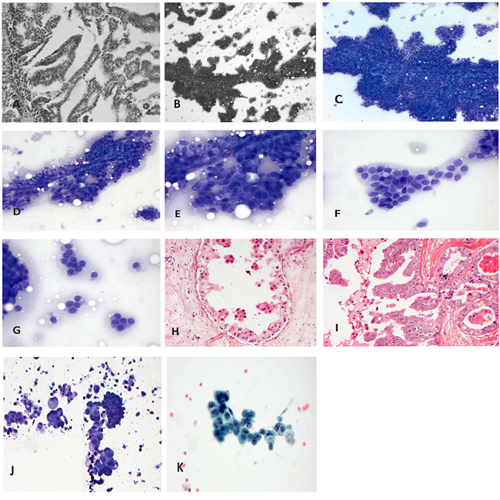 Encapsulated papillary carcinoma
[25] is a variant of papillary carcinoma characterized by fine fibrovascular cores covered by neoplastic cells of low or intermediate grade and surrounded by a thick fibrous capsule (figure 6a). In the majority of cases there are no myoepithelial cell layer within the papillae or at the periphery of the lesion.
There is a circumscribed round mass on mammography and ultrasound imaging. A frank invasive component is usually IDC and cannot be appreciated in the cytological material. Nipple discharge may be present. Cytologically the features (Figure 6b-g) are the same as the intraductal papillary carcinoma (Table 5), and the two entities can only be distinguished histologically. 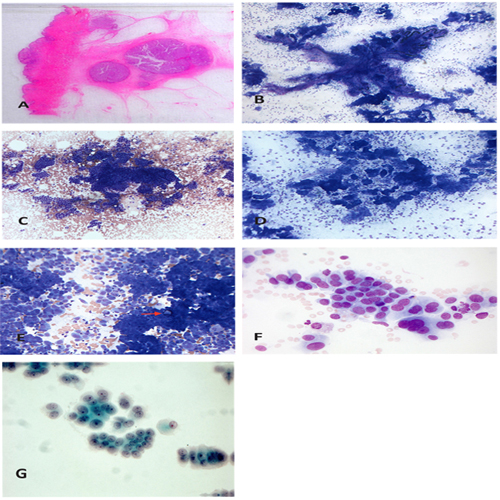 Solid papillary carcinoma [25] represents < 1 % of breast carcinomas. It occurs usually in menopausal women with a mean in the seventh decade. About 20-25 % have a bloody discharge. Mammography may show an abnormality or lobular lesion. Ultrasound may also show a lobulated mass that histologically (Figure 7a,b) corresponds to closely apposed, expansile nodules with delicate fibrovascular cores within the nodules. These tumors often reveal neuroendocrine differentiation and/or mucinous components. Conventional invasive growth may be present, often having mucinous or neuroendocrine features [28, 29]. The cytological features resemble the two above subtypes of papillary carcinomas (Table 5) (Figure 7c-h). The cystic component is virtually absent, and debris and macrophages are not present. The features and findings of the epithelial cells, though, are virtually the same as the two above. Images illustrating the findings are seen in figures 7c-h. The cytological criteria are those of a low - grade carcinoma [28]. The presence of an eventual additionally invasive component cannot be evaluated in these three lesions. Primary surgery should then be complete excision, but should not include removal of the sentinel node (SN) or extensive surgery
An overview and comparison of cytological features and immunocytochemical findings in benign and malignant papillary lesions is given in tables 3 and 6. 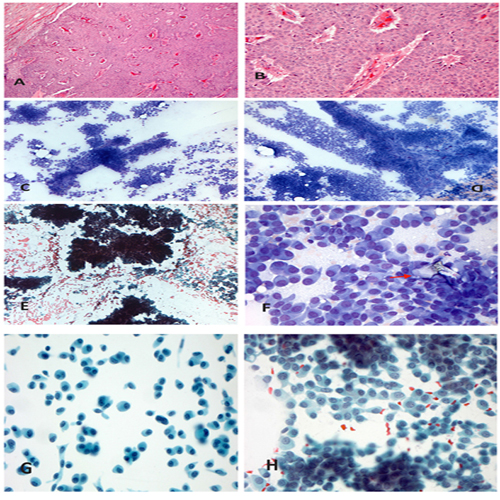 Invasive micropapillary carcinomas [25] are composed of small, hollow and morula-like clusters of cancer cells and sur- rounded by clear stromal places (Figure 8a). There is usually a reversed polarity, an “in side out”  growth pattern, whereby the apical pole of the cells faces the stroma and not the luminal surface. They make up 0.9-2 % of invasive breast cancers [4], but up to 7.4 % off invasive breast cancers may have partial micropapillary growth pattern [5]. The mean age is as in IDC, 75 % are grade 2 and 3, estrogen and progesterone receptors (ER/PgR) are usually positive, whereas HER-2 is variable, but often positive. They usually present as a palpable mass. Cytologically these present as high grade carcinoma cells in well demarcated, angulated micropapillary groups lacking a fibrovascular core with irregular crowded nuclei (Figure 8b-d) and are clearly malignant [30-32].
According to the WHO (world health organization) definition [25], invasive papillary carcinoma is a tumor with predominantly papillary growth pattern (> 90 %) in the invasive component. It is a rare tumor with no known clinical characteristics or known epidemiological data. The tumor resembles papillary carcinomas from other organ sites, in particular ovary, tube and lung that are the main differential diagnoses. The cytological features have not been described. 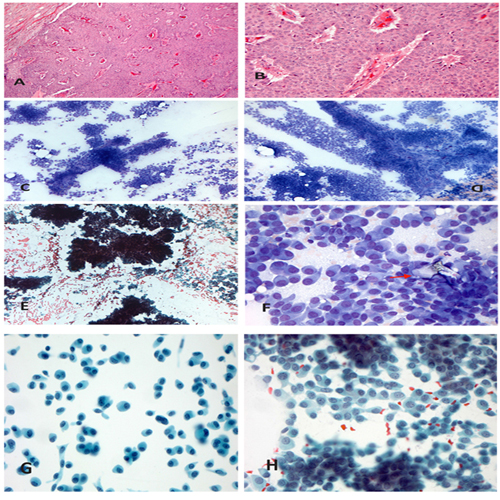