Mindfulness
Mindfulness defined as an awareness that comes forth by paying concentration to the purpose at here and now and without any judgmentally on the ongoing experience [1]. Being aware of the present moment without judging, reflecting or thinking is being mindful or mindfulness. Demonstration of mindfulness is direct attention to ongoing moments and mental state, yet seek after in experiential instead of systematic preparing. Mindfulness pertains to corroborated consciousness and concentration on the present moment and to ongoing experiences. Mindfulness is one form of awareness but varies reflection, self-observing, and requirement for discernment that all are from other forms of awareness and defined by rational, logical and analytical forms of processing information [2].
According to Germer [3] three interconnected elements of mindfulness. Firstly, mindfulness implies a feeling of awareness. That feeling of awareness is deliberately instead of blur. Secondly, this clear awareness depends on the current experience. Put differently, people feel cognizant about their instantaneous background and of the environment and not immediately draw the attention to the events of the past and opportunities for the future. Thirdly, an awareness of the continuing experience not to be judge, assess and intricate [4]. It means that the considerations, emotions, sensations, and desires are all acknowledged instead of assessed. A term of mindfulness can be utilized in various contexts. That is, mindfulness alludes to a portrayal of some express a state described as a feeling of uncritical attention to current experience. On the other hand, mindfulness symbolize as an intervention, the more often with meditation in which people learn how to mention this state of consciousness. Certainly, mindfulness is not a state, underpinning selfregulation but it as a mental process or acceptance [2, 5].
For the cognizant of natural tendencies of the humans and gives them a pause to change their reaction, mindfulness will be very helpful [6]. A variety of different mindful practices are available that are focused on coercing attention to a specific internal or external experience. Following your breath, thoughts, or focusing on a specific body part are internal experiences and focusing on a certain sound or listening for any sound you hear considering as external experiences [7].

Psychological distress
Psychological distress is viewed as an emotional condition that involves negative views of the self, others and the environment and is characterized by unpleasant subjective states such as feeling tense, worried, worthless and irritable [8]. These subjective states can reduce the emotional resilience of individuals and impact on their ability to enjoy life and to cope with pain, disappointment and sadness. Psychological distress can be viewed as a continuum in which people can move from experiencing wellbeing to distress and back at various times throughout their lives [9].
Brown & Ryan, investigated that mindfulness is positively related to subjective wellbeing, life satisfaction, and self-esteem, as well as negatively related to psychological distress (depression and anxiety). These relationships tend to persist even after emotional intelligence, private self-consciousness, neuroticism, and extra version are controlled. A growing body of research suggests that high level of mindfulness has positive effect in the treatment of variety disorders including stress, chronic pain, depression and anxiety [10].
A variety of studies have shown that attempts to instill mindfulness can alleviate mood disorders. That is, interventions that introduce or entail mindfulness have been shown to ameliorate symptoms of anxiety as well as depression [6, 7, 11]. Many protective factors that have been recognized, acceptance, forgiveness, and gratitude and mindfulness has been recognized as a protective factor to psychological distress and other psychological issues closely related to psychological well-being [12, 13].

Participant
A sample of 150 depressed patients purposively selected from different hospitals of Multan. All participants was married and belonged from same socio-economic status.

Instruments
Two Instruments was used in this research.
1. Freiburg Mindfulness Inventory
2. Kessler Psychological Distress Scale
Kessler Psychological Distress Scale (K10). The Kessler Psychological Distress Scale (K10) [14] is a simple measure of psychological distress. The K10 scale involves 10 questions about emotional states each with a five-level response scale. The measure can be used as a brief screen to identify levels of distress. The tool can be given to patients to complete, or alternatively the questions can be read to the patient by the practitioner.
Freiburg Mindfulness Inventory. The Freiburg Mindfulness Inventory [15] is a useful, valid and reliable questionnaire for measuring mindfulness. It is most suitable in generalized contexts. It is self-rated questionnaire and the 14 items cover all aspects of mindfulness. All of the items are scored on a 4- point scale 1=Rarely, 2=Occasionally, 3=Fairly, 4= often Almost always.

PROCEDURE
Information has been accumulated by using survey questionnaire and 2 questionnaires Freiburg Mindfulness Inventory and Kessler Psychological Distress Scale were utilized for data collection along with consent form and demographic sheet. These folks were informed with regards to the purpose of research and have been directed how to populate this weighing scales. Participants have been advised to help all the items seriously and have been advice in which responses could stay anonymous. Participants have been likewise provided confidence in which info would be discreet. SPSS 20 version (Statistical Package for Social Sciences) has been used for the descriptive and inferential statistical analysis of the data.

Table 1:Descriptive and Correlations Matrix on the scores of Mindfulness and Psychological Distress.

Table 2 indicated the significant positive effect of the psychological resilience on forgiveness.

Table 3 reveals that significant differences on the level of mindfulness among male and female depressed patients. (t =2.021, df = 148, *p < 0.05). The results show male have high level of of mindfulness as compare to female. No significant differences showed (t =--1.747, df = 148, p > 0.05) on the level of psychological distress among male and female depressed patients. 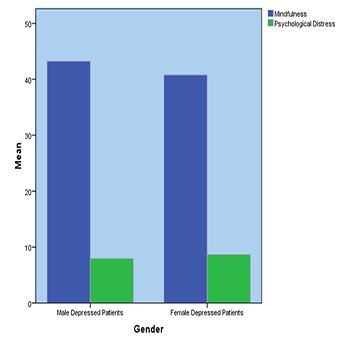 LIMITATIONS
Limitations also exist when it comes to measures of critical independent variables along with the theoretical frameworks we were looking at intended to stand for. Sample composition is relative small. Current study based on cross-sectional method and longitudinal method is best way to get depth knowledge about depressed patients.

SUGGESTIONS
In future researchers must notice these suggestions: Sample size of the research must be increase and across the nation exploration is required. This examination has established the relationship between mindfulness and positive thinking but in future exploration causal relationship highly recommended. More demographic variables like forgiveness, personality and happiness ought to be explored in the role of mental health.