The aim of this study is to develop biomathematical models with important physiological parameters involving immune response for antibody rhythms by using the circadian, infradian and ultradian rhythms of IgY antibody, which could be used in many aspects, for instance to explain the controversies concerning antibody concentration with biological reasons and biomathematical calculations, to optimize the antibody yield in large scale production. In general, this approach could be extended to construct computational models for other antibodies using their biological rhythms to describe their physiological and pathophysiological mechanisms. This approach would aid to utilize the engineered antibodies and their derivatives for various biomedical applications.

The immune system of all living things shows regularly recurring rhythmic variations in numerous frequencies, and the responses of the immune system to an antigen entry could vary in accordance to the chronobiological phenomena. These cyclic oscillations in living things occur for many essential biological processes in order to deal with environmental changes and challenges. Chronobiological phenomena are ubiquitous in living organisms; these periodic (cyclic) episodes are called as biological rhythms (a rhythm is a change that is repeated with a similar pattern). Most of the early reports on biological rhythms focused on circadian rhythms (roughly 24-hours cycle), which could be observed in chicken serum IgY, it has been depicted in mathematics by Forger and Kronauer in 2002 through “van der Pol oscillator”, written in the Lienard phase plane form:

where I[light] is an indicator variable, and that is 1 when the light is on, 0 otherwise; D is the change in the derivative of the second state variable induced by the light; c1, c2 are constants. This treats the state variables as some kind of “stuff”, the second of which is converted to the first, but whose creation is blocked or accelerated by light. In light of, this is not necessarily unrealistic; however it is only a first attempt at modeling changes in circadian rhythms [1]. The further investigations have imposed that, biological cycles having periods shorter or longer than circadian rhythm. For instance, cycles that have periods less than 20-hours are called ultradian rhythms, while cycles that have periods longer than 28-hours are called infradian rhythms. Collectively, these three rhythmic domains comprise a network or web of rhythmic oscillations that in many ways can be linked to the various chemical pathways that perform different functions and occur simultaneously within the same organelle or cell [2]. These cyclic oscillations in living things occur for many essential biological processes in order to deal with environmental changes and challenges. There is increasing evidence that immune system and its functions are highly and predictably organized in time, for example the immune response to antigen presentation differs both quantitatively and qualitatively according to time [3]. In chrono-immunological study, time dependent variations of immune system parameters are ubiquitous phenomena. Previous study has demonstrated that spleen, lymph nodes, and peritoneal macrophages of mice contain intrinsic circadian clockworks that operate autonomously even ex vivo [4]. Our previous observation demonstrated that FcRn receptor expressed with a regular periodicity in all tested organs [5]. These previous findings explain that, daily rhythms of variety of immunological phenomena and functions are obvious and well known. However, their molecular basis is little understood; thus, it is necessary to elucidate the biological rhythms of immune system (immune clock) to understand the timing mechanism of physiological and pathophysiological immune functions. Biomathematical or computational models have been proposed in different biological subjects in order to explain various complex phenomena. We have designed this study to demonstrate the rhythmicity of immunoglobulins (synonym for “antibodies” in most situation, refer to a part of the most important molecules in the adaptive immune response) using biomathematical models. In recent decades, significant and rapid growth of IgY literature shows increasing interest of the scientific community in chicken egg yolk antibody production. IgY antibodies found in birds, reptiles and amphibians are the avian counterpart of IgG. However, IgY antibody production in chicken and poultry has increased due to several advantages over the traditional mammal IgG production. In addition, the unique features of the avian immune system, notably the deposition of antibodies in egg make it ideal for basic immunological research. Recently, we have assessed the chronobiological rhythms of chicken IgY and found significant circaseptan rythms in yolk IgY. Besides the circadian rhythm of IgY is superimposed by an ultradian rhythm (Figure 1 & 2) and the biological reasons behind such oscillations are not clear [6, 7]. The biological oscillations of IgY concentration in serum and yolk IgY were analyzed using the OD450 absorption values (Figure 3). In this study, we constructed some biomathematical models on the basis of IgY oscillations in egg yolk and serum from the view of antibody chronobiological rhythms. Our models could contribute to the efforts regarding to multiple measures of physiology or oscillations in the circadian, infradian and ultradian rhythms of IgY. The following models could be used in many aspects, for instance to address the controversies concerning antibody concentration with biological reasons and biomathematical calculations, to optimize the antibody yield in large scale production. 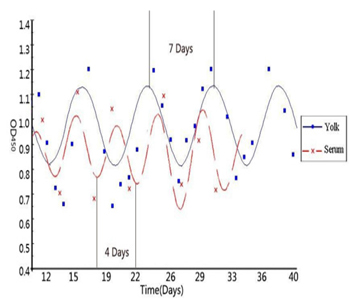 Figure 1: Biological rhythm of IgY antibody in serum and Yolk (adopted from He et al., 2014). 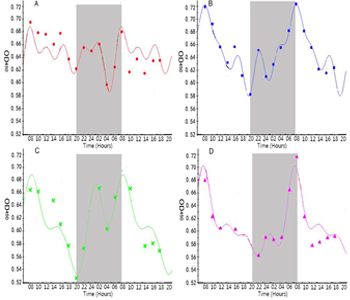 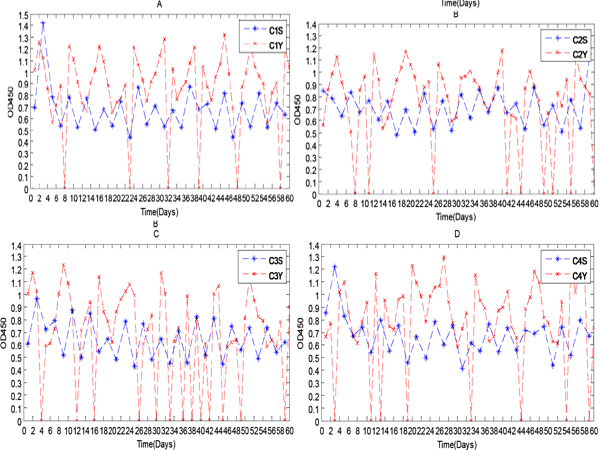 Figure 3: IgY levels in serum and yolk over a 60 day period.

The circadian rhythm of IgY in blood and yolk of chickens:

On some conditions, such as the reference [6], the model of circadian rhythm needs us to make a mathematical model to describe by the following two differential equations, which have many aspects, and are full of uncertainty:

where P(t) is the function on circadian rhythm of the time t, cj, = 0 are constants, Zj ( j =1,2,...n.) are the uncertainty of the jth individuality that determine the extent of these n factors related to circadian rhythm, and ?t is the time difference obtained by subtracting universal time. On the other conditions, the model of circadian rhythm is a simple system of equations, which is described by the following five nonlinear ordinary differential equations [7]: 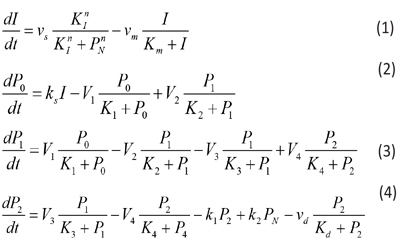 For convenience of biomathematical description, the explicit finite difference method has been chosen. The explicit method requires a small time step to ensure the stability and accuracy of the numerical solutions. The code developed here allows the user to set any time step. For all the simulations here, the default time step is set to 12 min. As an example, the finite difference of Equation (5) can be written as follows: 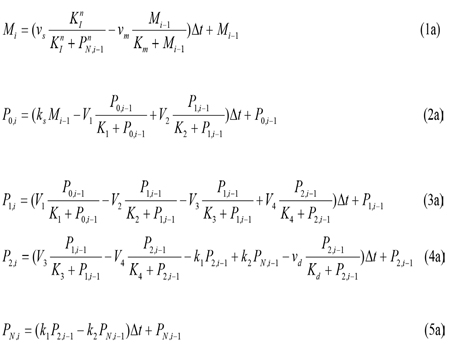 With the resultant finite difference equations, the concentration variables M, P0, P1, P2, and PN can now be calculated using iterations from one time step to the next. 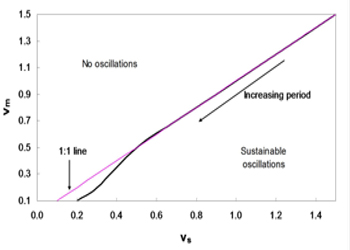 Figure 4: Phase diagram of vm and vs. Sustainable oscillations exist only when vs is greater than vm. The domain for such oscillations is relatively large.

As shown in Figure 4, the system with parameters vm and vs below the line produces sustainable oscillations. In brief, a sustainable oscillation requires the rate of accumulation vs to be greater than the rate of degradation vm; otherwise, the IgY concentration would degrade fast rather than accumulation, thereby resulting in the depletion of IgY and a possible collapse of the system. From this assumption, the 1:1 line can be drawn, which roughly coincides with the line obtained from simulations. In addition, the period of the oscillations increase with the decreasing vm and vs. 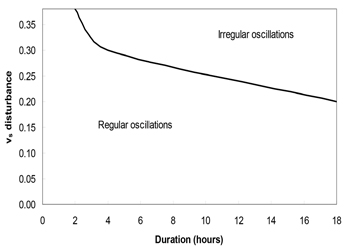 Figure 5: Multiple pulse disturbance phase diagram for vs. The oscillations become irregular when the disturbance amplitude of vs exceeds about 30% of its original value.

Despite our work is based on avian IgY antibody, the convenience of chicken-egg model in antibody study has taken into consideration to establish biomathematical models on the basis of our previous IgY rhythm study. Our biomathematical models can be further extended as computational models for the study of chronobiology of other antibodies (eg.: IgG, IgA, IgE and IgM) through their biological rhythms to describe their physiological and/or pathophysiological mechanisms. This would aid to utilize the engineered antibodies and their derivatives for various biomedical applications.

This work was supported by the Fundamental Research Funds for the Central Universities (2014YB030); Ministry of Education and State Administration of Foreign Experts Affairs “Overseas Teacher” project (MS2011XBNL057); the Key Construction Program (2015SD0018) of International Cooperation Base in S&T, Shaanxi Province, China.