Can Ultrasound Elastography Substitute Tissue Biopsy in the Diagnosis of Malignancy?

Ultrasonography, or imaging by ultrasound, is one of the most commonly utilized diagnostic procedures today. This is despite the introduction of many other alternative diagnostic methods. The reasons include ultrasound being non-ionizing (unlike X-rays and CT scans), non-invasive (unlike tissue biopsies), less expensive and more commonly available (unlike MRI and genetic tests). In addition, new ultrasound technologies have also made ultrasonography more reliable and agile, thus offering additional diagnostic capabilities. One of these new technologies is the so-called "ultrasound elastography".

We casually judge a material as “hard” or “soft” by applying pressure while touching it. In medicine, clinicians palpate the patient's body to determine if certain tissue feels normal, unusually hard or unusually soft, to get possible signs of disease or disorder. However, palpation is highly subjective and therefore can be unreliable. For example, lesions that are very small and those that are located deep into the body may not be detectable by palpation alone. Also, the degree of hardness between different pathologies may not be distinct enough that can be appreciated by our sense of touch despite extensive training and experience. Although in some cases, abnormal growths can be easily judged as hard tumor or cystic tumor based on their hardness and on their echo pattern during conventional ultrasound imaging, to differentiate one type of solid tumor to the others based on degree of hardness can be difficult. Such distinction is particularly important in clinically differentiating deadly malignant tumors from the benign ones because early detection and intervention of malignant lesions can be life-saving.
A newly introduced ultrasound technology provides a noninvasive way to accurately diagnose a malignant tumor based on its characteristic hardness. This technology is being utilized in a diagnostic procedure that grades tissue elasticity using ultrasound, more often called "ultrasound elastography".

Use of ultrasound in diagnosis has been one of the oldest of the "modern technologies" available to medicine today. Imagingwith the use of ultrasound, also called ultrasonography or echography, is considered one of the safest and cost-effective real-time imaging that is widely used today not only for diagnosis but also as an instrument useful in interventional medicine.
The imaging works when ultrasound waves, usually at frequencies between 2 and 10 MHz, is applied on the part of the body and the reflected sound waves (or echo), collected by the receiver and then analyzed by the computer, give a picture of tissue along its path. The varying tissue densities will results in varying impedances that will in turn give a varying echo signals and hence the formation of an image. Some tissue will have characteristic echo patterns that will help guide sonographers to identify landmark structures and detect possible anatomical anomalies and other abnormalities.

The Physics behind Elastography

Tissues that are very reflective of ultrasound tend to block ultrasound from getting an image of the tissue beyond that region while a tissue with very low impedance tends to dissipate ultrasound and prevent it from having enough echoes. These are true with hard tissues such as bones and gas filled structures such as the lungs. Some calcified lesions and tumors may also have some hard outer shells that could reflect ultrasound. These types of lesions would create artifacts that distort the echo-pattern. To address this imaging issue, elastography has been introduced. The term "elastography" is coined for this particular method that determines the level of tissue elasticity and display them as images based on the degree of elasticity.
those indicator pathogens that recommended for quality evaluation of raw materials and finished products by different pharmacopoeia. These procedures include cultivation, morphological and biochemical characterization of isolates [1]. Microbial identification methods can be divided into several groups (Table 1). 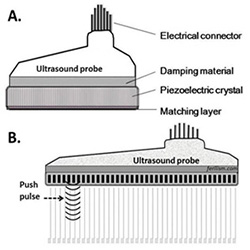 In this new technology, a couple of methods to elicit elastographic images from a sonographic device are being used. One is by manually applying pressure using the ultrasound probe while another is by using an specially designed ultrasound probe capable of sending strong pulses that would compress the tissue while ultrasound imaging device monitors the tissue response to that compression (See Figure 1). The elasticity of the tissue is then gauged based on the movement of every particle in the ultrasound field in 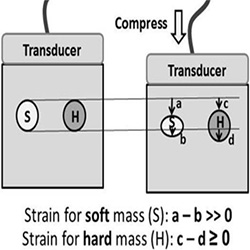 Figure 2:Calculating strain. The effect of manual compression on soft (S) or hard lesions (H) within the soft tissue and how strain or elasticity is being calculated.

response to the pulses (See Figure 2). Elastographic image will then be displayed either as gray-scaled or color-coded images based on the level of compressibility, thus allowing a more accurate image depicting hardness of the lesion relative to the surrounding normal tissue. Several clinical studies have shown the value of this method in differentiating suspected lesions.

Elastography in the Diagnosis of Malignancies and Other Lesions

Currently, several ultrasound devices from different companies have elastography functions. The main application of elastography is in the diagnosis of certain cancers; particularly cancers in the liver, breast, thyroid, and prostate (See Table 1) [1]. This ultrasound function is capable of identifying a tumor lesion to be either malignant or not, with a reliability comparable to tissue biopsy [2]. The latter being the current gold standard. Elastography has also the ability to delineate the actual size of the lesion (See Figure 3), more accurately than ordinary sonography. Studies have shown that with elastography, ultrasound imaging can diagnose the extent of breast tumors and are able to detect its state of malignancy.

Considering the nature of ultrasonography, which is noninvasive and devoid of pain compared to tissue biopsy, with elastography it can also be a better alternative in identifying the grade of liver lesions. This is particularly useful in lesions such as liver fibrosis and cirrhosis which are currently diagnosed by tissue biopsy [3,4]. With tissue biopsy, a small part of the liver lesion is either surgically excised or taken using a large bore needle for microscopic analysis. Complications such as bleeding and infection, in addition to pain, are possible. These complications associated with tissue biopsy are absent with elastography, thus making elastography a safer and advantageous alternative.
In most cases though, elastography may not be enough to make a diagnosis of a lesion's malignancy, but this will likely compliment diagnostic results from other methods to come up with a more accurate diagnosis. In addition, initial information provided by elastography may also help reduce the number of unnecessary biopsies.

Table 1:Clinical studies related to the use of ultrasound elastography in the diagnosis of cancers and other lesions.

The Future of Ultrasound Elastography

With the rapid advances in this technology, ultrasound elastography will likely become a common feature in all ultrasonographic devices. Further studies in this field will certainly find more applications for such technology, not only in the diagnosis of cancer and liver lesions, but in many other fields in medicine and related sciences.