Anticancer Potential of EDTA: A Preliminary in Vitro Study

To determine the potential anticancer activity of ethylenediaminetetraacetic acid (EDTA), six cancer cell lines of human origin (U937, C-32, HeLa, HSC-2, Molt-4, and U87-MG) were treated with different concentrations of EDTA, and then assayed for cell viability. The melanoma C-32 cell line, which was found to be moderately sensitive to EDTA, was then compared to normal melanocytes, on the other hand, a relatively resistant cell line Molt-4 was then chosen for further investigation to determine the role of calcium-chelating activity of EDTA against the cells. The result showed that the cell lines had different levels of sensitivity to EDTA; and, that melanoma cells are more sensitive compared to melanocytes. Comparison of EDTA toxicity to that of a known calcium-selective chelator, BAPTA, also showed marked differences in toxicity profiles, which may suggest that the calcium chelating ability of EDTA may not be a major player in its toxicity against the cancer cells. Further study should be done to investigate how such anticancer effects work in vivo; and also, if EDTA can be utilized as an enhancer of other anticancer therapies, such as chemotherapy, radiotherapy and hyperthermia.

Ethylenediaminetetraacetic acid (EDTA) is a known metal chelating agent that is clinically being used to treat heavy metal poisoning, such as mercury or lead poisoning; and also, to remove excess iron in blood [1]. In the body, EDTA is eliminated in the kidneys, which is clinically being utilized to determine the glomerular filtration rate in children [2]. With EDTA's iron chelation ability, it is being proposed that EDTA could be used as an additive in an agent that protects skin from radiation such as antiphotoaging products [3]. EDTA has also been shown as a potent inhibitor of matrix metalloproteinases and an important component in the design of drug. carrying liposomes [4, 5]. While a study also found that EDTA could be a useful and well-tolerated adjuvant for enhancing intratumoral effects of cisplatin chemotherapy, other studies found it to affect subcellular expression of clusterin protein in human colon adenocarcinoma COLO 205 cell line [6, 7]. EDTA may also inhibit the effect of bleomycin and was shown to prevent bleomycin nucleasic activity, a process important for bleomycin's ability to induce cancer cell apoptosis [8, 9]. EDTA may also prevent iron from the iron-doxorubicin complex that produces damaging reactive oxygen species [10]. In these studies where EDTA counters the effects of anticancer drugs, it may serve as an adjunctive therapy in preventing unwanted effects in the event of accidental extravasation injury during the administration of anticancer drugs.
This in vitro preliminary study aims to investigate the potential of EDTA as an anticancer agent or as a potential enhancer of anticancer therapy.

Cell growth and viabilities were analyzed by 3- (4,5-dimethylthiazol-2-yl)-5- (3-carboxy-methoxyphenyl) -2- (4-sulfophenyl) -2Htetrazolium assays (MTS assay or more commonly known as MTT assay) using CellTiter 96 One Solution Cell Proliferation Assay kit (Promega, U.S.A). Briefly, the medium in each of the 96-well plates were replaced with 100 μl growth medium, then incubated with 20 μl MTS solution at 37oC in a humidified 5% CO2 atmosphere. After 1-2 h incubation, the absorbance was determined using the Immuno Mini NJ-2300 (Nalge Nunc. International K.K., NY, USA) with a 490-nm wavelength filter. Data presented are averages of at least 4 samples/experiment with the experiments repeated 2 to 3 times.

EDTA and BAPTA, and cell treatments

EDTA (2-({2-[Bis(carboxymethyl)amino]ethyl} (carboxymethyl) amino)acetic acid or Ethylenediaminetetraacetic acid) and BAPTA (1,2-Bis(2-aminophenoxy)ethane-N,N,N',N'-tetraacetic acid) were purchased from Sigma (Sigma-Aldrich, CO. LLC., USA). All reagents were freshly prepared just before the experiments by diluting them to the desired concentrations using the culture medium of the corresponding cell line being treated with.
While under treatment, the cells were monitored daily by direct microscopic observation. Viability assays were decided when obvious differences between some of the treated samples and the control (untreated sample) were observed. For example, the data shown in figure 1, were the result after 72 hours of EDTA treatments when viability ratio is significantly suppressed in all cell lines at concentrations 300 µM or higher, a finding that was somehow expected during the pre-MTMT microscopy. 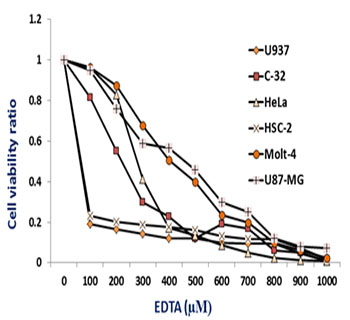 Figure 1: EDTA toxicity. Six cancer cell lines all of human origin were treated with varying concentrations of EDTA. Using MTT assay, cell viability were determined after 72 h and compared to the viability of the sample that did not contain EDTA.

The different cancer cell lines tested in this study have all shown some degree of sensitivity to the toxic effect of EDTA. Most of them required higher concentrations of EDTA with longer durations of treatments but these treatments are generally within the range of conditions of current chemotherapy treatment protocols. Human squamous HSC-2 cells and human myelolymphocytic U937 cells did show to be the most sensitive types; while, relatively, cell lines glioblastoma U87-MG and T lymphoblastic leukemia Molt-4 were the more resistant ones (Figure 1). The other two cell lines, melanoma C-32 and epithelial adenocarcinoma HeLa were moderately sensitive to EDTA. 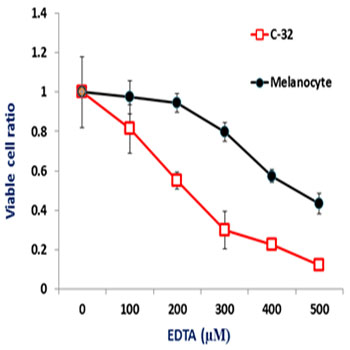 EDTA toxicity against the normal melanocytes (available in our facility) was then compared to that with the C-32 melanoma cells. The result showed significantly greater sensitivity of the C-32 melanoma cells over that of the normal melanocytes (Figure 2).
While several mechanisms of action by EDTA against the cells might be involved and need to be pursued, we decided to test one possible characteristic of EDTA being a calcium chelator, a test that can be easily done as part of this preliminary investigation. Using a known calcium-selective chelator BAPTA, we compared the toxicity profile of EDTA and that of BAPTA against a resistant cell line, Molt-4. The result showed striking differences between the two, which may suggest that calcium chelation may not be an important factor in the toxicity of EDTA (Figure 3, A vs. B).

The data showed that all the six cancer cell lines have shown some degree of sensitivity to EDTA. While the significant variabilities of their sensitivities suggest that the mechanism is influenced by factors inherent to the cellular or biomolecular profiles of each particular cell line, the melanoma C-32 cells showing relative greater sensitivity over the melanocytes bolster the argument that EDTA can be a potential anticancer agent.
EDTA is also a calcium chelator [11]. However, differences in EDTA's toxic profile against Molt-4 to that of the toxic profile of a known calcium-selective chelator BAPTA may suggest that calcium chelation is not a major mechanism involved, as far as, EDTA toxicity against cancer cells is concerned [12].

Figure 3: Toxicity to EDTA and BAPTA. Toxicity profiles of EDTA against Molt-4 cells, especially with the 72 hour treatments (72 h), showed to be different from that of a known calcium chelator, BAPTA.

Further studies are needed not only to investigate the mechanism related to in vitro toxicity; but also, to explore if such effects can also be replicated in vivo. EDTA, in combination with other anticancer therapies, could be also another interesting subject to be explored in future investigations.