A 7- year- old, male canine was referred with apathy and anorexia from last four days. Radiography revealed splenomegaly and ultrasound showed a "lacy parenchyma" with "hyperechoic perivenous" triangle. A tentative diagnosis of splenic torsion was made. The CT examination was performed for special reconstructions and to obtain additional information to confirm the diagnosis. Images in an oblique plane transversal to the splenic arteries and veins were reconstructed. Looking at these images in a fast forward video mode, the rotated pedicle, containing the splenic vessels along the gastrosplenic ligament, surrounded by the twisted, striated, hyperattenuating fat had a striking resemblance to a meteorological satellite video of a tornado. The "Tornado sign" is a characteristic, possibly pathognomonic sign of splenic torsion. Splenic torsion was than confirmed on exploratory laparotomy. The dog recovered completely with supportive care. In conclusion, if torsion of an organ is suspected and computed tomographic images in standard planes fail to demonstrate and identify the rotation, images perpendicular to the pedicle and/or main mesenteric or hilar vessels supplying the organ should be reconstructed and evaluated in a fast forward video mode as an additional diagnostic tool.

Isolated Splenic Torsion is a rare condition in dogs with unspecific clinical signs. The Great Dane and German Shepherd dogs are found to be at increased risk for isolated splenic torsion [1]. No age or sex predilection is known. For diagnosing splenic torsion radiographic and ultrasound examinations are further strongly recommended diagnostic tests, but none is necessarily pathognomonic [2, 3]. Laparotomy is the gold standard to confirm splenic torsion. With CT examination and special reconstructions additional information is obtained to confirm the tentative diagnosis of splenic torsion before surgery.

A 7- year- old, male Hovawart was referred with apathy and anorexia from last four days. The dog was treated with antibiotics (Doxycyclin, Streptomycin, Metamizol) by the local veterinarian without any improvement. Upon the presentation at the clinic, the dog was alert, mildly dehydrated (< 5%), exhibited increased rectal temperature of 39.5oC and heart rate of 100 bpm. A mass was palpated in the mid-abdomen. While the abdomen was examined, the dog was painful. The remaining physical examination findings were within normal limits. Complete blood examination was carried out.

Complete blood count revealed elevated leucocytes (19+109/l), decreased hematocrit (31%) and increased ALT (407 U/L), AP (1122 U/l) and Bilirubin (8,8 mol/l). The right lateral and ventrodorsal abdominal radiographs of the spleen revealed enlarged spleen with round margins. The dorsal extremity of the spleen, normally situated in the left hypogastric region, was displaced to the right side. The ventral extremity extended to the level of the fourth lumbar vertebra in the midventral line. No gas accumulations were seen within the spleen (Figure 1, 2). 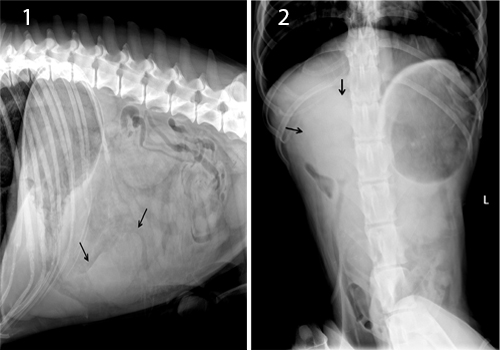 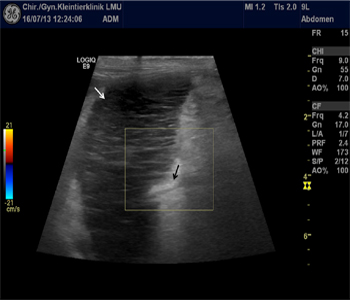 Figure 3: Sonography of the spleen: "lacy parenchyma" (white arrow) and hyperechoic, perivenous triangle (black arrow) with loss of Doppler flow at the hilus.

Abdominal CT examination was performed with a 64-slice, helical CT scanner (Somatom Definition AS, Siemens Healthcare, Erlangen, Germany). The dog was placed in sternal recumbency under general inhalation anesthesia. Breath hold technique in exspiration was used to minimize motion artifacts. Transverse images of the abdomen were acquired using 64x 0.6-mm detector collimation, 120 KVp, 120 mA, 1sec rotation time and 512x512 reconstructed image matrix. A soft tissue algorithm (B26f) was used for reconstruction. Further, a dualphase post contrast study was done, using 600 mg iodine per kg BW intravenous contrast agent (Iohexol, Accupaque 300, GE Healthcare Buchler GmbH&Co. KG, Braunschwaig, Germany) administered via power injector at a rate of 2.9 ml/ sec in the cephalic vein (total contrast dose 68.1 ml; 22.9 sec contrast flow duration). A region of interest was placed in the aorta at the level of the cardiophrenic angle, and the arterial scan was started with a delay of 5 seconds after a peak of 100 Hounsfield Units (HU) in the descending thoracic aorta. The late phase was started with a delay of 43 seconds after a peak of 100 HU in the descending thoracic aorta. Exhibiting a C-shaped appearance, the spleen extended from the left craniolateral abdomen, displayed a mildly cranial and right loop, and then proceeded to the right caudolateral portion of the abdomen. The spleen was severely enlarged, showed rounded margins and displayed a soft tissue density between 45 and 60 HU. In pre- and postcontrast images, the organ surface was mildly hyperdense. Additionally, mild changes in density of the thin peripheral splenic capsule were seen. Hyperattenuating fat stranding was present surrounding the spleen. Mild amount of free abdominal effusion, hyperdense to the abdominal fat was seen. After contrast medium administration, the abdominal vessels showed a proper enhancement. The splenic artery showed a sharp ending of the contrast filling, 5 cm proximal of the splenic hilus and branching into the splenic branches seen in both phases. The splenic veins, which did not enhance in any phase, were enlarged, ill-defined and wrapped around the splenic artery creating a small soft tissue halo at the level of the arterial contrast medium obliteration. The splenic parenchyma was homogenous and showed no contrast enhancement in the arterial and late phase. After obtaining the transversal images, dorsal and sagittal images were reconstructed with 1 mm slice thickness and 1 mm increment. Additionally, images in an oblique plane transversal to the splenic arteries and veins were reconstructed, using a double oblique multiplanar reconstruction tool (Somatom Definition AS, Siemens Healthcare, Erlangen, Germany) (Figure 4).

Looking at these images in a fast forward video mode, the rotated pedicle, containing the splenic vessels and the gastrosplenic ligament, surrounded by the twisted, striated, hyperattenuating fat had a striking resemblance to a meteorological satellite video of a tornado (Video).

OUTCOME From the clinical and diagnostic findings, an isolated splenic torsion was diagnosed, and exploratory laparotomy was performed. A small amount of free intraabdominal fluid was present. Corresponding to the imaging findings, the swollen and severely enlarged (38 x 18 x 7 cm), bend, dark purple spleen was rotated by ~270o, and almost completely wrapped in the thickened omentum. The splenic capsule showed multiple ruptures. After ligation of the splenic vessels and the short gastric vein, the spleen and the adjacent mesentery were removed. Histopathological analysis was performed on hematoxylin- eosin (HE) and Giemsa stained paraffin sections of formalin-fixed, paraffin embedded tissue samples. The spleen and the omentum displayed excessive haemorrhagic infarction, haemorrhage, extensive necrosis, multifocal thrombosis, and granulating inflammation (Figure 5). 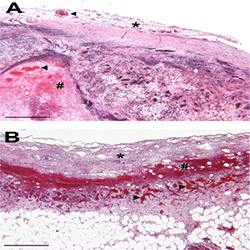 Isolated splenic torsion is a rare condition in dogs. More commonly splenic torsion occurs in association with gastric dilation volvulus [2, 4]. Clinical findings are unspecific and diagnostic imaging is required for diagnosis [2]. Abdominal radiographs can reveal splenomegaly, loss of abdominal detail and intrasplenic gas [5, 6]. However, definitive diagnosis of splenic torsion is not possible based on these unspecific findings. "Mottled parenchyma" or "lacy appearance" of the spleen can be detected ultrasonographically in cases of splenic necrosis or infarction unrelated to splenic torsion [3]. Sonographic demonstration of a "hyperechoic, perivenous triangle", has been described to be indicative, but not pathognomonic, for splenic torsion [7]. A hyperechoic, perivenous triangle can as well be found in extensive venous thrombosis or diffuse neoplastic infiltration as e.g. splenic lymphoma [8]. In our case, the splenic artery was encased by a soft tissue cuff at the level of the contrast medium obliteration, compatible with venous wrapping, and likely corresponding to the corkscrew-like finding in a previously reported case [9]. This central pedicle was surrounded by streaky marbled fat, compatible with hyperattenuating fat stranding in our case. This finding was not reported with splenic torsion yet, and is described as an abnormal increased attenuation in fat, first mentioned in veterinary CT examinations with several abdominal diseases [10]. Histologically, fat stranding was reported to correspond to an underlying pathologic process with increased edema and engorgement of lymphatics [11]. Various disease processes can lead to this appearance including infiltration by inflammatory cells, edema, lymphatic accumulation, hemorrhage, tumour infiltration, and fibrosis [12]. In the present case, there was also hemorrhagic infarction, necrosis, and granulating inflammation in the omental fat tissue, as evidenced by histopathology (Figure 5). In human medicine many underlying diseases like mesenteric panniculitis, neoplasms, mesenteric lymphoma, infiltration of lymphatics by gastrointestinal adenocarcinoma, acute cholecystitis, idiopathic, cirrhosis due to oedema secondary to portal hypertension, adjacent inflammation, appendicitis and inflammatory bowel disease, typically due to Crohn disease are described [11-14]. Macroscopically, there were ruptured areas of the splenic capsule. The splenic capsule was seen as a mildly hyperattenuating, thin peripheral structure with areas of decreased density in CT, likely compatible with the ruptured capsule. This finding was obscured due to the presence of hyperattenuating fat stranding surrounding the spleen partially effacing the splenic margins. Lack of blood flow and missing contrast enhancement within the splenic vessels and splenic parenchyma can occur due to various reasons, for example vascular neoplastic invasion, necrosis, acute splenic infarction or thrombosis [8, 15, 16]. The tornado-like appearance was visible without contrast medium administration and was independent of vascular flow and contrast enhancement as fat stranding is not based on contrast medium enhancement. The tornado sign consists of the twisted pedicle containing the central distorted vessels and surrounding twisted fat stranding. The splenic vessels resemble the eye of the tornado and the surrounded twisted fat stranding corresponds to the peripheral twisting tornado wall (Figure 4 A-C). The tornado sign should help to differentiate specifically between splenic torsion and other splenic diseases. We observed that the appearance depends on the orientation of the image plane in relation to the splenic vessels. Standard transversal, sagittal and dorsal views didn`t reproduce this finding properly. We identified the tornado-like appearance most conspicuously with reconstructed imaging plane perpendicular to the central splenic vessels. The perpendicular orientation to the transverse scanning plane was pointed out for proper delineation of the omental whirling pattern reported in human medicine [17]. Based on the course of the splenic vessels, a double oblique reconstruction was needed. We suspect that the tornado-like appearance depends on the degree of splenic rotation, and should be more severe with increased degree of rotation. Presence of abdominal fat seems to be a pre-condition for abdominal fat stranding, and, correspondingly, also for occurrence of the tornado-like appearance, too. The amount of intraabdominal fat and the degree of fat stranding might further modify the appearance. Hence the tornado-like appearance could be missed with very mild fat stranding, probably in an early disease stage, or with partial torsion of the spleen. Severe peritonitis or generalized hyperattenuating fat necrosis might probably lead to effacement of the twisted fat stranding. A CT "whirl sign" was described in a dog with mesenteric volvulus in dorsal planar reformatted contrast-enhanced CT images [18]. The "whirl" mainly represents the intestinal loops encircling the blood vessels and was first reported in 1981 in human medicine [19]. No fat stranding has been reported with the mesenteric volvulus in the dog [18]. In contrast the tornado resembles the rotated fat stranding around the vessels. In human medicine fat stranding and a whirling pattern of fatty streaks within the omentum has been described with omental torsion [17, 20]. Torsion of liver lobes, gallbladder and liver lobe, uterine horn and intraabdominal retained testicle has been described [21-25]. Liver lobe and gall bladder torsion, mesenteric volvulus and isolated splenic torsion were diagnosed with computed tomography without reported fat stranding [9, 18, 23]. The presence of fat stranding and it`s twisted appearance maybe an additional diagnostic sign in torsion of organs with surrounding fat or fatty mesentery or omentum.

In conclusion, if torsion of an organ is suspected and computed tomographic images in standard planes fail to demonstrate and identify the rotation, images perpendicular to the pedicle or afferent vessels of the organ should be reconstructed and evaluated in a fast forward video mode as an additional diagnostic tool.