The Trifecta aortic valve (St. Jude Medical, Inc., St. Paul, MN, USA) is a third-generation three-leaflet stented bioprosthesis consisting of bovine pericardium tissue leaflets mounted on a titanium stent covered with swine pericardium, and is specifically designed for the supra-annular aortic position [1]. Since its arrival on the market in April 2011, several studies on the hemodynamic performance and durability of this device have yielded promising results, showing overall optimal trans-prosthetic gradients and low percentages of severe patient-prosthesis mismatch, even in subjects with a small aortic annulus in relation to body size [2]. Other studies have demonstrated that its near-physiologic, hemodynamic profile is superior to that of some of its principal competitors [3-8]. However, the studies conducted so far have often been relatively small and have had a limited period of follow-up; moreover, the populations analysed have been quite heterogeneous in terms of age and indication for aortic valve replacement.

The present study sought to analyse the hemodynamic performance of the St. Jude Trifecta aortic bioprosthesis in a population of polymorbid, moderate- to high-risk, octogenarian patients, mainly suffering from severe aortic valve stenosis.

Patient selection
Between January 2014 and January 2015, 250 consecutive patients underwent aortic valve replacement with the St. Jude Trifecta aortic bioprosthesis at Careggi University Hospital, Florence. Patients submitted to multiple combined surgical procedures were not excluded from the study. Written informed consent was obtained from all patients and institutional review board approval was granted by the local ethics committee.

Surgical technique
All patients underwent midline sternotomy and cardiopulmonary bypass; myocardial protection was implemented through moderate hypothermia and cardioplegic arrest. After aortic annulus decalcification, the appropriate prosthesis size was determined by the surgeon with the specific manufacturersupplied replica sizer. Prostheses were implanted by means of three linear sutures. Immediately after weaning from cardiopulmonary bypass, correct bioprosthetic positioning and function were checked by trans-oesophageal echocardiography. None of the patients required an aortic root enlargement procedure.

Patient follow-up
Upon hospital discharge, each patient was scheduled for a one-year follow-up visit, consisting of clinical examination, ECG and a thorough echocardiographic exam. Of the 226 surviving patients, a total of 202 attended the follow-up visit and were enrolled in the present study. Deceased patients’ medical records were obtained from the patients’ relatives or from their general practitioners. Standardized definitions from the Society of Thoracic Surgeons/American Association for Thoracic Surgery, specified in the ‘‘Guidelines for Reporting Morbidity and Mortality and Cardiac Valvular Operations’’ [9], were used to classify adverse events. Early events were defined as those occurring within 30 days of surgery, mediumterm events were defined as those occurring between 30 days and 6 months after surgery, while late events were classified as those occurring between 6 months and one year after prosthesis implantation.

Echocardiographic examination
Preoperative and one-year postoperative data from bi-dimensional and Doppler transthoracic echocardiographic examinations (EPIQ, X5-1 transducer, Philips Healthcare, Andover, Massachusetts) of all the patients enrolled in the study were acquired in a single core laboratory and stored in an ad hoc database. Standard prosthetic valve measurements were collected according to the American Society of Echocardiography (ASE) guidelines [10]. Each measure was repeated three times and averaged. Peak and mean systolic gradients were obtained automatically through the modified Bernoulli equation, by integrating the continuous-wave Doppler spectral envelope of flow, sampled where the transducer position could yield maximum velocity across the aortic valve or bioprosthesis. Effective orifice area (EOA) was calculated as (CSALVOT x TVILVOT)/TVIAO, where CSALVOT represents the cross-sectional area of the left ventricular outflow tract (LVOT), while TVILVOT and TVIAO represent the time-velocity integrals (TVI) derived from the pulsed-wave Doppler of LVOT and the continuouswave Doppler of the aortic valve/prosthesis, respectively. Finally, mild-to-moderate patient-prosthesis mismatch (PPM) was defined as any value of EOAi (EOA indexed by patient’s body surface area) between 0.85 cm2 /m2 and 0.65 cm2 /m2 , while severe PPM was defined as any EOAi value below 0.65 cm2 /m2 [11-13]. Left ventricular mass (LVM) was indexed by body surface area (BSA), calculated by means of the Dubois and Dubois formula [14].

Statistical analysis of data
Statistical analysis was carried out by means of SPSS, release 22.0 for Windows (IBM SPSS, Inc., Chicago, IL, USA). All data are presented as mean ± standard deviation or as percentages (continuous and categorical variables, respectively). The Kolmogorov–Smirnoff test was used to verify the normality of data distribution. Student’s paired t-test was used to compare continuous variables. Dichotomous variables were compared by means of Fisher’s exact test or χ2 , as appropriate. Gender differences were analysed by using two-way analysis of variance. P < 0.05 was considered statistically significant.

Implanted prostheses ranged in size from 19 mm to 27 mm; no patient received a prosthesis with a nominal size of 29 mm. Figure 1 shows the size distribution of the Trifecta aortic valves implanted, on follow-up examination. 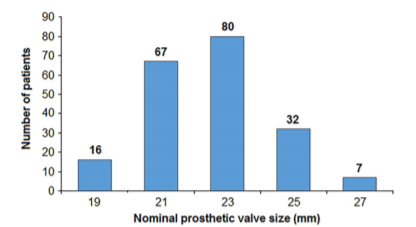 A total of 24 (9.6%) patients died. Early mortality occurred in 4 (1.6%) patients. In the immediate postoperative period, 5 (2.47%) patients suffered thromboembolic events: 4 (1%) transient ischemic attacks (TIA) and 1 (0.49%) ischemic stroke; none of these patients had a previous known history of atrial fibrillation. Two (1%) patients underwent postoperative thoracic revision for sternal wound dehiscence. No major bleeding occurred in the postoperative period or during follow-up. There were 4 (1.9%) cases of prosthetic valve endocarditis. Two (1%) patients suffered early prosthetic valve detachment and root abscesses, and needed immediate re-operation. Another 2 (1%) adverse events were incidentally detected during the scheduled one-year follow-up echocardiographic examination; these took the form of subacute endocarditis with sessile vegetation protruding into the prosthesis orifice: after careful re-evaluation by means of trans-esophageal echocardiography, an indication for re-operation was established in both cases. Freedom from prosthetic valve endocarditis was 98% at one year. There were no cases of prosthetic valve thrombosis or significant hemolysis. A de novo, irreversible, advanced or complete atrio-ventricular heart block needing permanent ventricular pacing occurred in 15 (6%) patients. A total of 6 (2.9%) patients underwent re-hospitalization for congestive heart failure during the follow-up period (Table 2). 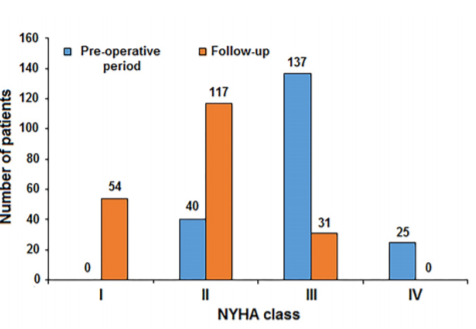 Figure 2: Distribution of NYHA classes before surgery and on follow-up examination. N = 202. 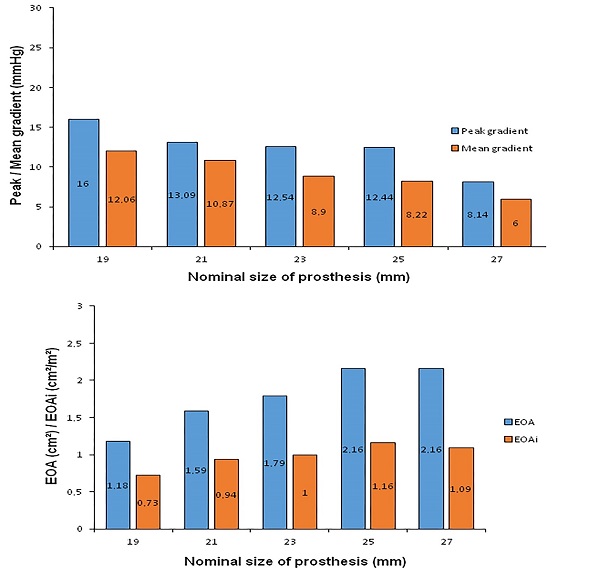 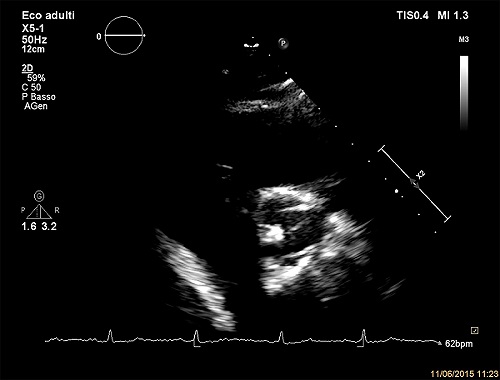 The results of the present prospective study confirm the optimal haemodynamic profile of the Trifecta aortic bio-prosthesis, first described in the pilot study by Bavaria and Colleagues [1]. Very low trans-valvular gradients and larger EOAs endow this valve with one of the highest performance levels among currently available pericardial bio-prostheses [3-8]. These features have also been observed in patients with small annuli, relative to body size [2], in whom haemodynamic results have even proved to be comparable to those of stentless bio-prostheses[16].

While several studies have tested the haemodynamic performance of the Trifecta aortic valve and evaluated its durability over variable periods of follow-up [17], very few have reported haemodynamic data collected after one year or longer [1,18,19]; our follow-up data are consistent with their results. The considerable reduction in LVMi and the complete LVH regression attained in more than half of the patient population confirm the excellent haemodynamics of this prosthesis. Our data assume even greater importance if we consider the advanced age, higher number of comorbidities, higher average preoperative risk and elevated number of concomitant procedures of the patients enrolled in the present study.

To our knowledge, our population is the oldest one ever to undergo aortic valve replacement with the Trifecta aortic bioprosthesis. Our patients had more comorbidities and relatively higher preoperative risk profiles: nevertheless, mortality was comparable to that expected in a healthy population within the same age-group. Severe PPM, which has been demonstrated to negatively affect patient prognosis [18-21], had a low incidence, occurring in only 21 (10.4%) patients; these were mainly women with little body surface area and small aortic annuli. Diastolic dysfunction, although present in more than half of the population, did not affect the global clinical outcome of patients, probably because of the reported good adherence to optimal medical therapy.

Study limitations
Our study reflects the annual experience of a single primary center. While the fact that all procedures were carried out by the same surgical team using standard surgical techniques could be an advantage in reducing confounders, the limited size of our population could constitute a limitation to the study. Moreover, although we could document good valve durability on one-year follow-up examination, with only one case of early deterioration, early post-operative and discharge data were not available for comparison, making it impossible to evaluate the temporal trend in the performance of the prosthesis.