Background & objectives: Social functioning plays a major role in community health as both a "health asset" and "determinant of physical and mental health". The aim of present study was to establish a frame for the concept of social functioning and develop related indicators in national and provincial level.

Methods: A combination of qualitative and quantitative approach was used. A primary pool of domains, subdomains and related indicators were extracted via literature review. Next, through conducting sessions with experts, the framework and indicators was developed. Finally, scoring in a three-point Likert-type scale was used to prioritize indicators on the basis of their importance and feasibility to measure.

Results: A consensus-built framework was developed with six main domains including; "family role"; "role as member of social networks including friends and relatives"; "responsible for self-care"; "role as a citizen"; "economic roles" and "flourishing the talents". Indicators related to family functioning", violence and employment were ranked highest.

Conclusions: The idea of social functioning is, on the face of it, straightforward. However, reviewing evidence demonstrated high level diversity between different communities and experts from different countries. The locally developed framework and prepared indicators assist policy-makers to analysis the current situation of populations' social functions and an instrument in their hands to monitor community-based initiatives in both national and provincial level.

In the new public health, the concept of "social functioning" has received particular attention as both a social health asset and a determinant of physical and mental health, in despite the fact that the concept primarily derived from the works of sociologists and psychiatrists [1-2]. Seeking care for nonpsychotic mental disorders as a consequence of problematic social relationships was one of the first reasons of paying attention to the concept of social roles and similarly, social functions [3-5].

In Iran, as a middle-income country, with rapid social, cultural, and political changes, and improvement in social function was increasingly emphasized by government and policy-makers in recent twenty years, following the evidence-based reports of diminishing trend of social health and capital and increasing trend of social problems such as drug abuse, violence, depression, relationship and family breakdown. The last report of global burden of diseases study regarding Iran situation, which estimated burden of 289 diseases with 67 risk factors, ranked drug use, intimate partner violence, and children sexual abuse as 10th, 13th, and 16th risk factor, respectively; and ranked major depressive disorder, anxiety disorder, drug abuse disorder, self-harm, and interpersonal violence as 4th, 10th, 12th, 23th, 25th of diseases, respectively [14, 15]. In addition the trend of divorce and sexual dysfunction among Iranian spouses has been increasing during recent decades [16, 17]. Taken together, the weight of problems with social aspect in Iranian health system is dramatic. Iran Supreme-leader has recently alarm and concern at the impact of social problems and emergent need for governmental interventions. For this reason, policy-makers in different organizations such as Ministry of State, Ministry of Social Affairs and especially Ministry of Health (MOH) made several attempts to deal with the problems. Establishment of Social Health Unit in MOH, conducting the first round of "Iranians" social health survey", and implementing provincial community-based initiatives to reduce social problems were a number of good illustrations [18-20].

Following the mentioned attempts, Social Health Unit of MOH decided to develop an evidence-based conceptual framework and indicators to monitor social functioning as a major aspect of social health in national and provincial level since there is no a consensus among sociologists and public health scientists on the concept of social functioning. Indeed, developed indicators would be a valuable instrument in hands of policymakers in different levels to make most effective and efficient attempts. Therefore, the aim of our study was to contribute to this growing area by exploring framework of social functioning, and develop and prioritize indicators through a consensus-building approach.

The methodological approach taken in our study was a mixed qualitative and quantitative approach. At first step (qualitative phase), the aim was to identify all probable domains, sub-domains, and indicators of social functioning through a structured literature review. Strategy of search was mainly relied on search of academic literature and then World Wide Web for gray literature such as governmental reports and policy papers.

We reviewed the literature from 1995 to 2017 to identify domains and sub-domains and related indicators within areas. Persian databases such as IRANDOC, "Barakat Knowledge Network System", Magiran, and SID were searched. English databases, e.g. Social Sciences Citation Index, Medline, Scopus and Google Scholar, were also searched. The key words included indicator, index, social functioning, social adjustment, social role, social performance, social health, etc. and a filter for social support and social insurance. To do qualitative analysis, meaning units from different documents were extracted and coded. Similar codes were grouped and primary categories were formed. The highest homogeneity was maintained within the groups and also the most heterogeneity between groups. Then the categories were named as domains and subdomains.

Next, a primarily prepared framework of social functioning was presented and discussed by a group of ten experts from different disciplines "psychiatry, psychology, public health and sociology. Then, through a two rounded mailing process, the consensus was built on social functioning framework, domains, subdomains and indicators. Indicators were arranged both positively such as employment and negatively such as divorce rate.

In quantitative phase, a questionnaire including prepared indicators was sent to officers of Mental Health Departments in all provinces with a census sampling approach from 56 Medical Universities (In Iran, each public Medical University has a defined catchment area and is responsible for health of population in its own area. 25 of officers accepted to participate (Response rate = 45%).

They were asked to state their view on each indicator in two aspects- importance and feasibility to be measure- in 1 threepoint Likert-scale (one to three).

Based on the scores of each indicator in two aspects, we categorized the indicators in three categories:

The developed conceptual framework of social functioning and a number of its indicators are displayed in figure 1. 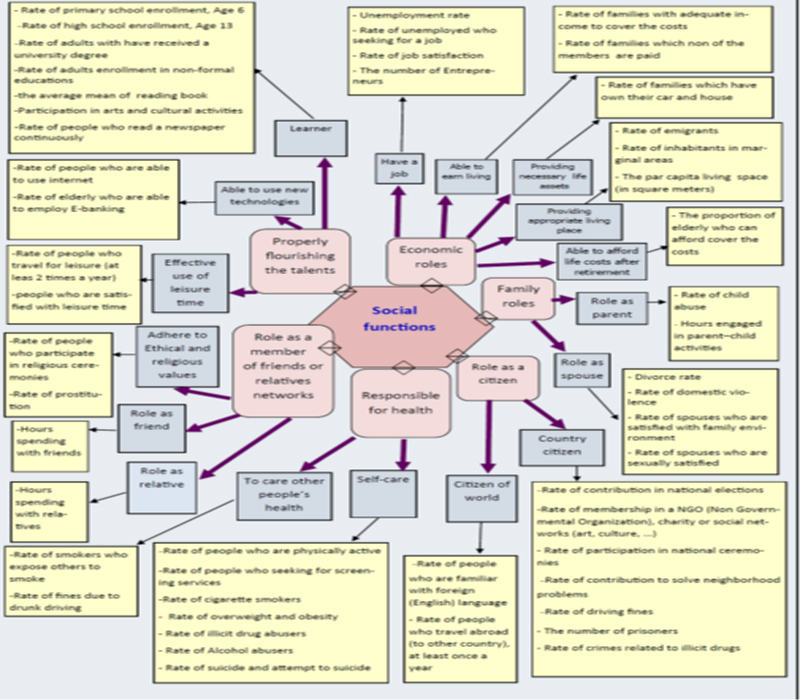 According to the scores of importance, indicators related to employment, divorce, satisfaction with relationship with spouse, and job satisfaction achieved the highest ranks. Indicators related to suicide, smoking, alcohol consumption, child abuse, parenting skills and favorable function of school teachers won the next ranks. Figure 2 shows the rank of different indicators based on score in detail. 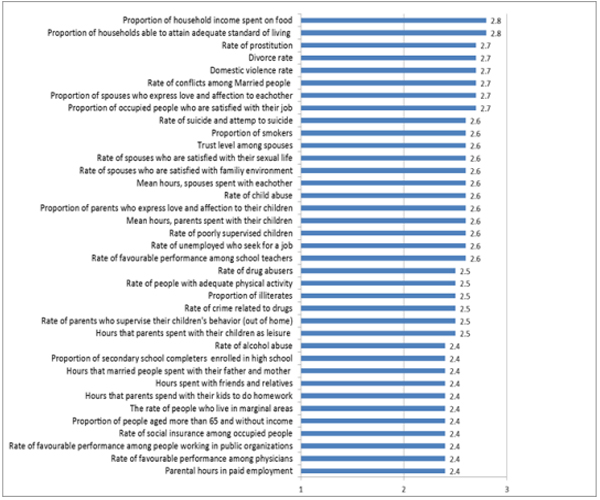 Figure 2: The scores of social functioning indicators (with score higher than 2.3)

Finally, the high-priority indicators based on both importance and feasibility are summarized below:

To our knowledge and search, it was the first study in country that attempted to develop social functioning indicators in national and provincial level in a systematically evidence-based approach. The developed framework of social functioning includes five domains and 17 sub-domains which emphasized mainly on social roles and responsibilities. In this conceptual framework, ideal social functioning occurs when an individual is 'a productive person', 'a good member of family, friends and relatives networks', 'adhere to moral and ethical values', 'a good citizen of country and world' and finally 'able to flourishing his/her talents'.

In current study, we suggested a framework which monitors social functioning independently from health but along with other aspects of health. This approach in not usual and most of health system integrate social functioning indicators in comprehensive health programs. Healthy people 2020 which provides science-based, 10-year national objectives for improving the health of Americans, is a good illustration. There is a separate part for social indicators, some of them emphasizing on social functioning such as; being economically stable (e.g. Proportion of households that experience housing cost burden); being educated (e.g. Proportion of high school completers who were enrolled in college the October immediately after completing high school); living in safe Neighborhood (e.g. reduce the rate of minor and young adult perpetration of violent crimes); and community participation (e.g. Proportion of persons eligible to participate in elections who register and who actually vote) [10]. Regarding other approaches to social functioning indicators, assessing WHO health indicators demonstrates high focus on literacy, economic situation and health care access as the main indicators which are related to social functioning [21]. Similarly, Canadian health indicators also focus on unemployment, community belonging, and income as three main social indicators [12].

High score of indicators related to family functioning such as sexual satisfaction and parenting skills are surprising. The list of top-ranked indicators shows the change of Iranian experts' view on social functioning. It seem that their previous view which has been focusing on pure mental disorders such as drug abuse and depression is shifting to a more broad approach that which pays particular attention to social routes of problems such as unemployment, lack of social skills and dissatisfaction in family environment. Additionally, emphasis on risk-taking behaviors such as smoking, physical inactivity and alcohol consumption was interesting too. It shows the attention of Iranians expert to the issue of newly emerged non-communicable diseases, behavioral risk factors, and their social impacts.

On the other hand, less attention to indicators related to employing new technologies, non-formal education such as; mean time non-formal study, ability to use new IT technologies and environment protection, was disappointing.

Taken together, the developed indicators would assess the policy-makers, especially in provincial level to design, implement and monitor efficient community-based interventions.

Grant for the ISHS was awarded by the Mental and social health department of Ministry of Health and Shahid Beheshti University of Medical Sciences on the approval of the study protocol by the research ethics Committee of university.