Synthesize and Antimicrobial Analysis of Schiff Base Ligand N-Salicylcefuroxime

Schiff base ligand N-salicylcefuroxime was synthesized from cefuroxime and salicyldehyde to develop a more effective antibiotic. Bacterial infections have been a major health problem and the emergence of multi drug resistant complicates the situation. In the purpose of discovering more effective procurement, several antibiotics have been procured or synthesized. Advanced research of synthetic chemistry has pointed out several organic compounds with antimicrobial potentials, Schiff bases are one of such compounds. Cefuroxime is a bactericidal antibiotic. This research aimed to discuss the synthesis of a new schiff base from common antibiotic cefuroxime and salicyldehyde. This ligand synthesized and characterized by elemental analysis and some other physicochemical techniques. This synthesized compound was also characterized by different spectroscopic techniques. It was subjected to melting point determination, TLC (thin layer chromatography) determination, chemical tests, solubility test, etc. The schiff base was screened for in vitro anti-bacterial activity by disc diffusion method. The synthesized compound was found more anti-bacterial potential then cefuroxime.

Organic synthesis is a one kind of study how we build molecules ranging from complexes, biologically active natural product to new materials because synthesis allows a chemist to construct entirely new structure. It is a special branch of chemical synthesis and is concerned with the construction of organic compounds via organic reactions [1]. Organic molecules often contain a higher level of complexity than inorganic compounds. So that the synthesis of organic compounds has developed into one of the most important branches of organic chemistry. There are several main areas of research within the general area of organic synthesis, total synthesis, semi-synthesis and methodology [2]. Organic synthesis involves the conversion of a substrate to the desired molecule. To make the product molecule, most organic synthesis requires the use of a series of one step reactions. Determining which reactions to use follows a technique called retro synthetic analysis. Organic chemists use synthesis for a variety of purpose. The synthesis of natural products increases the available supply of the compounds for further study or use [3]. A Schiff base is a nitrogen analogue of an aldehyde or ketone in which the C=O group is replaced by C=N-R group. It is usually formed by condensation of an aldehyde or ketone with a primary amine. Cephalosporins are indicated for the prophylaxis and treatment of infections caused by bacteria susceptible to this particular form of antibiotic. First-generation cephalosporins are active predominantly against Gram positive bacteria, such as Staphylococcus and Streptococcus. They are therefore used mostly for skin and soft tissue infections. Successive generations of cephalosporins have increased activity against Gram-negative bacteria, albeit often with reduced activity against Gram positive organisms [4]. The antibiotic may be used for patients who are allergic to penicillin. The different β-lactam antibiotic structure. The drug is able to be excreted in the urine. Cefuroxime is a cephalosporin (SEF a low spor in) antibiotic. It works by fighting bacteria in your body. Cefuroxime is used to treat many kinds of bacterial infections, including severe or life-threatening forms [5].

Preparation of Schiff base ligand of Cefuroxime [6] Cefuroxime and salicyldehyde were taken (1:1 ratio) in a round bottom flask along with containing methanol as a solvent. The magnet was introduced as stirrer into the reaction medium.

The reaction was carried out at 80°C. After 8 hours, the apparatus was switched off and the reaction mixture was cooled in an ice water bath and left for 24 hours to allow condensation of the product. After the product was condensed, it was filtered and collected.

The remaining reaction mixture was collected in a beaker which was placed on the hot top of the hot plate with magnetic stirrer to evaporate the remaining solvent. After Solvent evaporation; the beaker was placed in an ice water bath to crystallize the remaining product which was then filtered. The along with the previous batch of filtrate was dissolved in methanol.

TLC was used to monitor the progress of reaction .It was performed at room temperature using standard TLC plate. A mixture of the solvents N-hexane and methanol was used at ratio of 5:2. The sample solution and standard cefuroxime solution were spotted onto the plates and kept in a TLC chamber containing a small quantity of the solvent mixture. Then the chamber was covered and samples are allowed to rise up the plate through capillary action. After the solvent had almost travelled to the plate it was removed and the solvent front were marked with pencil. Then the plate was observed under the UV lamp where the samples were visualized. The visualized samples were marked with pencil. The distance travelled by the sample and that travelled by the solvent front were noted. 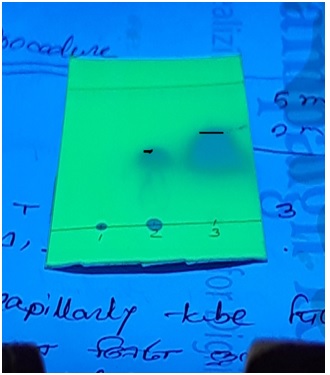 Here the TLC value is justified. Moreover in future HPLC analysis of each compound would be studied.

The UV spectral analysis was carried out by using UV visible spectrophotometer and the spectral data were shown as table 1.

The electronic absorption spectra are often very helpful in the evaluation of results furnished by other methods of structural investigation. The electronic spectral measurements were used for assigning the stereochemistry of ligands based on the position and number of d-d transition peaks. The electronic absorption spectra of the SB ligand N-salicylcefuroxime (L) and Cefuroxime (S) were recorded at room temperature using methanol as solvents. The maximum wavelength was observed at 510 nm which was different from cefuroxime. So, it was confirmed that new Schiff base was found [7]. 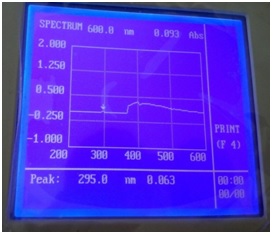 The 1HNMR spectral analysis of SB Ligand was carried out by using DMSO solvent and the spectral data were shown as table 2. 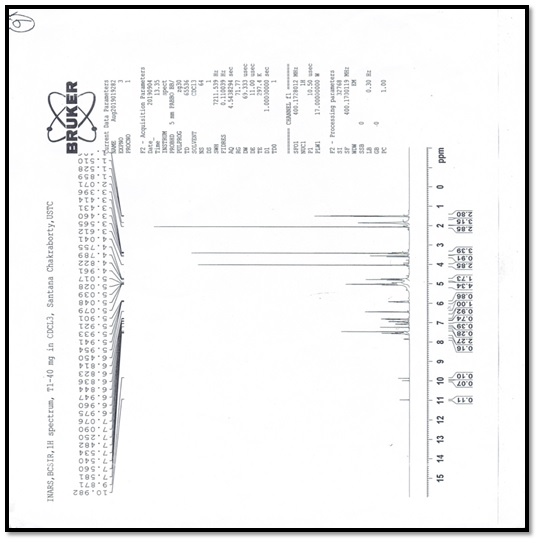 IR spectral data for the prepared ligands are shown as table 3. 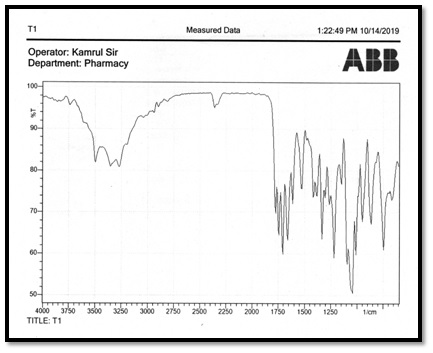 Figure 4: IR spectral of the Cefuroxime (A2) and SB ligand N-salicylcefuroxime (T1).

Cefuroxime standard solution and N-salicylcefuroxime solution in DMSO was used to prepare discs at a solution of a concentration of 30mg/ml was applied to the discs with the help of micropipette in aseptic condition. The dishes were then inverted and kept in a refrigerator 24 hours at 4°C [9].

The synthesis and also characterization of innovative metal complexes of the two Schiff base ligands which are derived from condensation reaction of the cefutaxime with the 1H-Indole-2, 3-dione(isatin) (LI) in addition to p-dimethylaminobenzaldehyde (N,N-DMAB) (LII) (Scheme1 ) as well as studies co ordination behavior of two ligands with the Co(II), Ni(II), Cu( II ), Cd(II ), Pd(II) Pt(IV) ions [10].

Test tubes were vortexed to get a uniform suspension

The bacterial suspension were immediately transferred to the sterile petri dishes

It was then refrigerated at 4°C

Table 4: Results of the antibacterial activity of the ligand (salicylcefuroxime) and Sample (Cefuroxime).

Schiff base ligand N-Salicylcefuroxime was synthesized by using condensation reaction method. Here -NH2 group containing cefuroxime was used as starting material which is an antibiotic. –CHO i.e. aldehyde group containing compound salicylaldehyde was used to prepare the ligand. This ligand was characterized on the basis of IR, 1HNMR and UV spectral data. This product was confirmed by checking melting point, TLC, Rf value, color test, test, several spectral data etc. Some identification tests were performed for several functional groups. The structure of synthesized schiff base ligand N-salicylcefuroxime is given:

Antimicrobial activities against E. coli and S. aureus were determined. New Schiff base ligand was found more active than the sample compound cefuroxime against those bacteria. So, the synthesized compound may be further used as a antibiotic. The prepared Schiff base can be used to prepare complex compounds by using the transition elements The diameters of zone of inhibition (in mm) of the standard drug Cefuroxime and new Schiff base ligand N-salicylcefuroxime against bacteria, Escherichia coli and Staphylococcus aureus were found to be 13, 18 and 14, 16 mm respectively.  The ligand found to be active against the bacteria Staphylococcus aureus and activity is more than standard. It also found more activity against the bacteria Escherichia coli such as Fe (II), Fe (III), Cu (II), Co (II), Ni (II) etc. In future the stability of this compound under physiological conditions would be studied.