The main aim of this paper is to show the management of a patient with advanced Bisphosphonate-related osteonecrosis of the maxillar (BRONM) and to provide a discussion of the alternatives for the treatment of this condition. We report the history of a 72-year-old-woman without any information of interest on her clinical records, who underwent breast cancer surgery on 2005 because of a ductal breast carcinoma. After surgery, it was decided to use chemo- and radiotherapy as an adjuvant treatment, adding intravenous bisphosphonates (BPs) to prevent bone metastasis. In the postoperative control thirteen years after the administration of BPs the patient evolution was torpid. A facial CT scan was performed showing an osteosclerosis and an isolated bone sequestration image compatible with the developing of advanced BRONM. It was decided to practice surgical treatment of the lesion, after treatment for three days with broad-spectrum antiobiotherapy. Risk factors of BRONM and surgical modalities of treatment are discussed.

Bisphosphonate-related osteonecrosis of the maxillar (BRONM) is a severe adverse reaction experienced of these drugs commonly used in the treatment of cancer and osteoporosis and involves the progressive destruction of bone in the mandible or maxillar [2]. Depending on the drug, its dosage, and the duration of exposure, the occurrence of this adverse drug reaction may be rare (e.g. following the oral administration of BPs treatment for osteoporosis) or more common (e.g. following intravenous bisphosphonate for cancer treatment). BRONM is associated with significant morbidity, adversely affects quality of life (QoL), and is challenging to treat (3).

BPs mechanisms of action are: decrease of bone resorption due to inhibition of the osteoclastic activity, apoptosis induction of the osteoclasts, antiangiogenic action and disturbance in the physiological bone turnover. These actions turn the bone more frail and incapable to repair microfractures due to repetitive stress, which, associated to terminal vascularization of the maxillar, convert this zone into one more propitious to suffer osteonecrosis with bone sequestration areas and its clinical expression among ulcerations intra- and extra orally, difficult to treat. Moreover, BPs have an inhibition effect on the cellular cycle of the keratin that delays reparative mechanisms on the mucosa [4].

Because the clinical appearance of BRONM can vary in a broad range, several classifications have been proposed; however, the American Association of Oral and Maxillofacial surgery (AAOMS) differentiates between three stages of BRONM with specific therapeutic alternatives for each BRONM stage [5], as this is shown at Table 1

Although the need for surgical treatment in advanced BRONM is widely accepted, there are still some controversies with regard to the extent of surgery. Therefore, the present study aimed to analyze the outcome of surgical therapy in a patient with a maxillary isolate necrotic secuestrum and a review of the literature.

75-year-old woman, without any information of interest on her clinical records (absence of diabetes or toxic habits), who underwent breast cancer surgery on 2005 because of a ductal breast carcinoma, which consisted on a tumorectomy with axillar dissection. Postoperative results showed tumorectomy with free margins and metastasis in seven out of ten axillar lymph nodes, classifying it as a pT2N1M0. It was decided to use chemo- and radiotherapy as adjuvant treatment, adding intravenous BPs (Zometa® at a monthly 4 mg dosis in 15 minutes each with calcium blood tests) to prevent bone metastasis. In the postoperative control 13 years after the administration of BPs the patient evolution was torpid, appearing an ulceration of the mucosa with pain, haemorrhage and suppuration. The intraoral clinical exploration showed necrotic bone exposition in the oral cavity. A facial CT scan was performed showing an osteosclerosis and an isolated bone sequestration image compatible with the developing of advanced BRONM (Stage 3 according to the classification previously named). Note the rest of the maxillar was free of necrosis and covering with healthy mucous ridge (Figure 1). 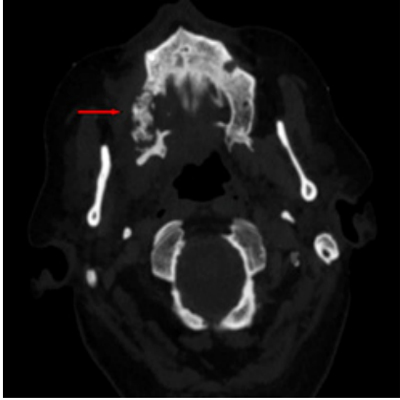 The development of an advanced BRONM was probably related to several factors as a prolonged use of BPs, and its high potency. It was decided to practice surgical treatment of the lesion, after treatment for three days with broad-spectrum antiobiotherapy. Under local anesthesia performing an excision of the bone sequestration, debridement of necrotic tissue and direct closure were done. The surgical piece of necrotic bone was removed (Figure 2). A local flap to help completely close the wound was unnecessary. After the surgical treatment the patient was submitted to conservative treatment according to our Unit guideline (oral amoxicillin/clavulanic acid 875/125 mg, 3 times a day, for 15 days, associated with chlorhexidine 0.12% mouthwash 2-3 times a day) during five days

In the last clinical examination on January 2018 the patient evolution was favourable, with resolution of her maxillary disease with complete healing of the mucous tissue and absence of suppuration.

Despite numerous studies, it is still unclear the most effective modality of surgical therapy in advanced BRONM. Most studies evaluating different treatment approaches have been limited by the heterogeneity of the study population with regard to the medical indication for BPs therapy or the BPs application form (oral vs IV) [6].

Therefore the aim of the present report was to evaluate the effectiveness of surgical therapy in a patient with specific characteristics: absence of risk factors that predispose to developing a BRONM, such as poor oral hygiene or oral surgical treatment (dental extractions) during treatment with BPs [7] or therapeutic use of BPs IV to prevent bone metastasis. A proportion of jaw risk of 2:1 with respect to upper maxilla was proposed [8]. On the other hand, it emphasizes the intensity of the BRONM in its first manifestation (stage III), which could be attributed to a prolonged use (over 10 years) of Zometa® (nitrogen BP with a greater power than others as Alendronate or Ibandronate). This fact is explained because though the half-life of Zometa® in the bloodstream is very short, ranging from 30 minutes to 2 hours, once absorbed by skeletal tissue it can persist for more than 10 years, which would explain its persistent long-term action on the bone [9].

In our experience, the adequate election of surgical treatment modality (more or less aggressive treatment) depends on numerous factors such the general status of the patient and grade of extension of the BRONM.

Note that the success of surgical therapy mainly depends on elimination of the entire necrotic bone secuestrum preventing the damage of around soft tissue and maxillary infectious. According to others authors, the success depends on the radical surgical treatment (maxillectomy) and the posterior reconstruction with local flaps (buccinator, temporal, buccal fat pad flap...) [10] or the employment of microvascular free flaps [11]. In selected cases, mostly for breast cancer or prostate cancer patients with continuity defects from intravenous bisphosphonate-induced osteonecrosis, standard cancellous marrow grafting with platelet-rich plasma growth factor supplementation has been successful. Maxillary resections are treated with prosthodontic obturators as they are in primary cancer surgery. Reconstruction of oral bisphosphonate-induced osteonecrosis defects usually takes the form of alveolar grafting and/or dental implant placements, and only rarely requires grafting of continuity defects [12].

In our experience, because the high complications, more aggressive surgical treatments only were indicated in refractory disease or when there is evidence that the totally of the maxillar is affected.

In conclusion, the surgical procedure depends on the patient status and lesion characteristics. In the present case the use of surgical debridement together with oral antibiotic therapy indicate positive results regarding the surgical treatment of BRONM.