Background: Diabetes is an emerging global health problem in Nepal. Currently there is dearth of nation-wide data regarding the prevalence of chronic complications and drug utilization pattern. This study will help health-care professionals approach management more aggressively to prevent complications.
Objectives: To assess the prevalence of chronic complications of type 2 diabetes and analyze drug utilization pattern at tertiary care health centers of Nepal.
Methods: This is a descriptive, prescription based, and retrospective study. A sample size of 98 was selected systematically. Data were collected from patient case records and Prescriptions. The obtained data were entered in the structured patient profile form, and the filled forms were analyzed.
Results: Out of the total 98 cases evaluated, 52 (53.06%) were males and 46(46.93%) were females. The mean age was 54.24±12.48. At least one chronic complication was found in 71(72.44%) of the study subjects. The prevalence of the associated diabetic complications were as follows viz. Hypertension (51.02%), IHD (23.46%), retinopathy (28.57%), nephropathy (24.48%) Neuropathy (15.30%), dyslipidemia (45.91%), diabetic foot (5.10%) and cerebrovascular conditions (1.02%). The overall utilization pattern of drugs were as follows viz. anti-diabetics ( 39.30%), anti-hypertensive ( 12.59%), antiplatelets( 9.6%), lipid lowering agents ( 10.2%), vitamins and minerals ( 10.58%),GI drugs( 7.29%), antimicrobials( 5.29%), others (5.10%). Among anti-diabetic drugs, metformin (39.30%) was the most preferred agent both as monotherapy and combination therapy. Likewise, preferred drugs for management of hypertension, IHD, dyslipidemia and neuropathy were ACEI (28.98%), Aspirin (75.47%), Atorvastatin (78.57%), and Amitriptyline (41.1%) respectively.
Conclusion:The prevalence of chronic complication among type 2 diabetic patients was found to be high. Although poly pharmacy was observed, drug utilization pattern can be rational owing to higher prevalence of complications. Early diagnosis, intensive blood glucose control and rational drug selections should be encouraged to minimize the occurrence of complications.

Diabetes is defined as “A metabolic disorder of multiple etiology characterized by chronic hyperglycemia with disturbances of carbohydrate, fat and protein metabolism resulting from defects in the insulin secretion, insulin action, or both” (WHO). High blood Sugar is the hallmark of diabetes that increases the risk of complications. Failure to control elevated blood sugar or inadequate treatment of diabetes could cause number of complications. Generally, the injurious effects of diabetes are separated into macro vascular complications (coronary artery disease, peripheral arterial disease, and stroke) and micro vascular complications (diabetic nephropathy, neuropathy, and retinopathy) [1]. A report on diabetes and its risk factors indicated that risk of myocardial infarction increased by 3-6 times. Similarly, it increases the risk of heart failure by 2-3 times, risk of amputation 45 times, blindness 10-25 times and Kidney failure 15-20 times [2].
Diabetes long considered a disease of minor significance to world health, is now taking its place as one of the main threats to human health in the 21st century. The global figure of people with diabetes is set to rise from the current estimate of 150 million to 220 million in 2010 and 300 million in 2025 [3]. According to International Diabetes Federation, Four out of every five people with diabetes now live in developing countries, with most affected men and women of working age.
Diabetes is an endemic disease in Nepal, and is bringing new challenges in connection with rapid urbanization and modernization. The Nepal Diabetes Association reported that diabetes affects approximately 15% of people = 20 years and 19% of people = 40 years of age in urban areas. According to WHO, diabetes affects more than 436,000 people in Nepal, and this number will rise to 1,328,000 by 2030. The study conducted by Chhetri [4] showed diabetes prevalence was 25.9% and higher proportion of diabetes was demonstrated in male (27.1%) than the females (24.8%) in Kathmandu valley of Nepal. Increased body weight due to high intake of fatty and other food and low physical activity are the main reasons for the diabetes epidemic in urban Nepal. The problem of diabetes is reflected by its increasing complications. Diabetes is reported to be leading cause of chronic renal failure in Nepal [5].

This was the multicentre, retrospective cross sectional study. All the patients who meet inclusion criteria were taken as study population.

The study population is of 98 patients.

Data was entered in Microsoft office Excel worksheet and was analyzed.

Approval for the study

The proposal for a project work was approved from the department of Pharmacy, KU. After that approval was taken from the hospitals where data collection was done.

Feasibility of the study (Pilot Study)

Pilot study was carried out for one week. Necessary changes in the data collection forms and methods were done accordingly. Data collected during pilot study are not included in data analysis. 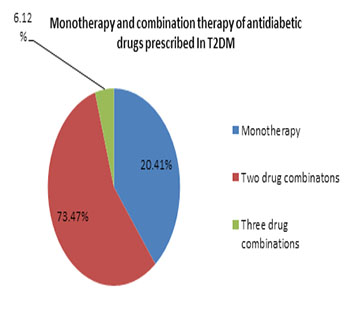 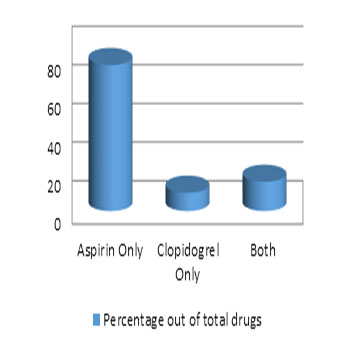 Out of total patients, 53 (54.08%) patients received one or more anti-platelet agents for ischemic heart disease or prevention of cardiovascular complications. From this study, it was discovered that aspirin was preferred agent (75.2% out of total anti-platelet agents) as mono-therapy used among Type II Diabetes Mellitues (T2DM) patients followed by a combination of aspirin and Clopidrogel. 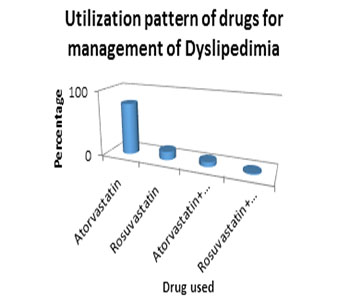 The drug use evaluation studies of hypolipidemic agents showed that 91.87 % of the patients received statins. Fenofibrate and Ezetimibe were used rarely (9%) in combination with statins in patients with severe dyslipidemia which could not be managed by statin monotherapy. Among statins, atorvastatin (78%) was most commonly used cumulating both monotherapy and combination therapy, followed by rosuvastatin (14%). 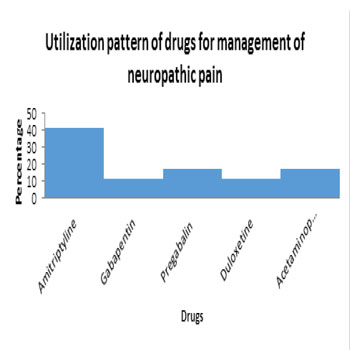 Figure 5: Utilization Pattern of Drugs for Management of Neuropathic Pain.

Anti-diabetic drugs accounted for almost 40% of the prescribed drugs followed by anti-hypertensive medications, which might be due to higher prevalence of hypertension (12.59%) among diabetic patients. The utilization of lipid lowering drug and anti-platelet drug was 10% and 9% respectively. Furthermore, the utilization patterns of drugs used in management of neuropathic pain was 3.10%.

As per the findings of the study, type II DM was more prominent among male gender and was highly prevalent on age group over 50 years of age. At least one chronic complication was found in 71 (72.44%) of the study population.
The prevalence of complications of diabetes was found to be substantial, with cardiovascular complications being the most prominent. The reasons for higher prevalence of complications might be longer duration of diabetes, poor glycemic control as observed in the study. The prevalence of the associated diabetic complications were as follows viz. Hypertension (51.02%), IHD (23.46%), retinopathy(28.57%), nephropathy (24.48%) neuropathy( 15.30%) , dyslipidemia (45.91%) , diabetic foot (5.10%) and cerebrovascular conditions (1.02%). The overall utilization pattern of drugs were as follows viz. anti- diabetics ( 39.30%), anti-hypertensive ( 12.59%), anti-platelets( 9.6%), lipid lowering agents ( 10.2%), vitamins and minerals ( 10.58%),GI drugs( 7.29%), antimicrobials( 5.29%), others (5.10%). Among anti-diabetic drugs, metformin (39.30%) was the most preferred agent both as monotherapy and combination therapy. Likewise, preferred drugs for management of hypertension, IHD, dylipidemia and neuropathy were ACEI (28.98%), Aspirin (75.47%), Atorvastain (78.57%), and Amitriptyline (41.1%) respectively.
Although poly pharmacy was observed, drug utilization pattern can be rational owing to higher prevalence of complications. Minimization of the occurrence of complications should be encouraged by early diagnosis, intensive blood glucose control and rational drug selections.