Objectives: The objective was to conduct a study of impedance to analyze the obtained values and establish relationships between body composition and physical activity in a population of students of varying ages in Extremadura.

There are many studies carried out on body composition in order to characterize the populations.

The index of Corporal mass (BMI) has become one of the main variables of measure used in different studies. The proportion of weight measured in kilograms divided by the square of the height measured in metres called Quetelet index and was subsequently renamed as BMI (BMI) [1].

Weight, height, the fat by weight (FM) and the percentage of fat mass (FM %) are some of the values that can be obtained from a study of impedance and through the evaluation of the results obtained can establish multiple correlations to evaluate the State of health and nutrition of individuals and populations.

The impedance is a method of non-invasive, cheap and easy to handle that it can be used to make an analysis of body composition and there has been using in recent decades as a fundamental tool in studies of public health, based his study on two parameters: the body electrical resistance and reactance [5].

Many studies have examined the relationship between body composition and bone mineral density, but little attention has been paid to how these relationships vary with age and sex [6]. Most of the studies which provide this kind of relationship focus at an early age as the children and adolescents, with emphasis on primary prevention of obesity.

It has been shown that the benefits of physical activity produce maintenance or prevention of an increase in the BMI which in turn is correlated with an increase of mass prevention grease for physically active subjects [7].

Normal weight adults participate in activities of moderate and strong intensity and longer duration than people with overweight or obesity [8].

The objective is to conduct a study of impedance to analyse the obtained values and establish relationships between body composition and physical activity in a population of students of varying ages in Extremadura.

The lack of uniformity in the relationship between BMI - FM % between populations and the many factors that influence obesity requires the realization of this type of study in different geographical points in order to be able to establish health programmes aimed at prevention and standard values as possible related to the reality in the future.

Preliminary research that aims to test and determine the validity of the instruments and techniques used to perform further large scale investigations. It is a descriptive, correlational, transversal study carried in the Nursery and Occupational Therapy School from the University of Extremadura (Spain) through the selection of a group of 14 students enrolled in the University Master on Health Science Investigation, given at such school with a median age of 27.5, 5 male and 9 female.

Previously was a sample of 15 subjects, but he had to exclude one of them by not having turned up properly to the data collection session. All the subjects expressed their consent.

The studied variables were anthropometric measures (weight and height), the percentage of body fat and the degree of activity of each of the subjects.

To evaluate anthropometric measures we use a digital scale and an estadiómetro, scoring data in kilograms and centimeters respectively. Measured them and weighed only once, removing only shoes.

Body fat percentage was determined by means of bioimpedance electrical using the OMROM BF300 instrument. This device is used to carry out a technique based on the resistance offered by the water and the body tissues to the passage of an electric current, the resistance is determined by the contents of water and electrolyte content. And as a result offers the fat mass in Kg and %.

We must consider the used bioimpedanciometro wasn't programmed to adjust the weight, making the corresponding subtraction of the weight of the clothes.

Each subject is explained previously on that was the test and should make. They should remove all metal objects which carry in their hands, placed in standing with the bioimpedanciómetro between the hands and arms stretched forward. This technique should be three consecutive times to obtain more precise results. However, it was only performed once, because the instrument was calibrated by an external company, showing results of very high precision with a single measurement.

As regards the assessment of physical activity of subjects used international questionnaire IPAQ, which provides 4 forms of physical activity: sedentary, moderately active and competitive. These qualitative data were converted to quantitative, values ranging from 1 through 4 respectively, to facilitate its handling in Excel tables.

All variables (weight, size, age, gender, mass, fat Kg and % and physical activity) were recorded in a table. The determination of each one of them was made in a single afternoon consecutively, without taking into account the nutritional status in the who were the subjects (fasting or recent intake) and without the knowledge of the pattern of recent elimination. The Excel was used for comparisons, taking P < 0,05 as the minimum level significance.

Table 1: Averages of the characteristics of the group and relationship with physical activity for each genus and the total sample.

N/D: No one can calculate regression of PA-BMI, PA - FM or PA-KgFM % because physical activity in women is the same (moderate). 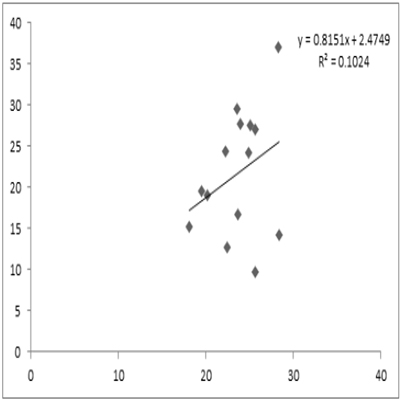 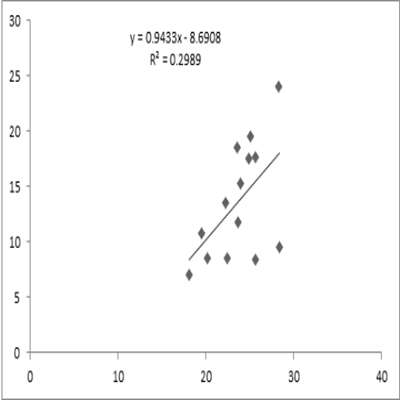 We have made a correlation between PA and different anthropometric data being the most relevant ones which are described below:

Figure 3 does not show significance between BMI and PA neither men nor women. 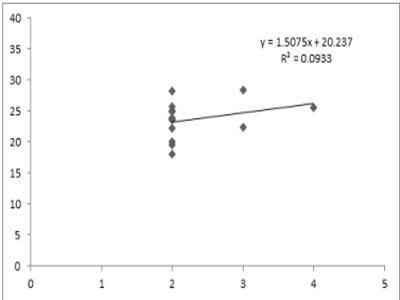 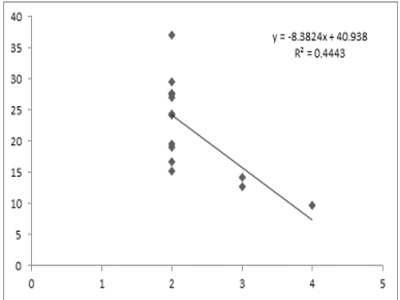 Finally the Figure 5 concerning the relationship between the PA and FM kg, determines that there is no correlation between two parameters in either of the two sexes. 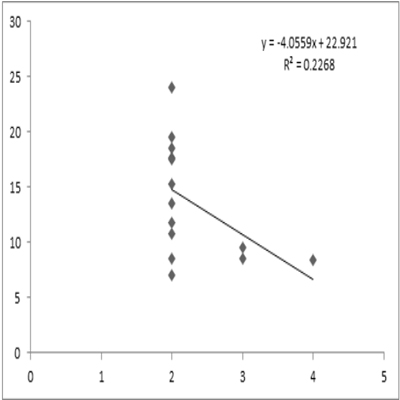 Another problem found was, little variability that showed the female subjects with respect to physical activity (100% of the cases n = 14, they expressed having moderate physical activity), which has not allowed us to obtain any valid correlation between the PA with the anthropometric parameters (BMI, % FM and FM kg) makes us ask ourselves if the homogeneity of the answers correspond to a selection bias or again has been the result of the low sample studied.

Other studies such as the one done by Kyle et to [7] in 2001, saying that the PA could limit the FM in women until the age of 45, which could have led us to think about the possibility of obtaining similar results to be counted with a sample that matches the results exposed by Kyle age et to the. Zamboni et al [11] also concludes in his study, physical sidability is related to the FM and BMI in older women.

In the case of males subject, we have only been able to establish correlation between the PA and FM % by having a sample more variable in which the PA is concerned (SEM ±SD = 2. 8±0. 84) but with fewer subjects under study. Within the constraints posed by the sample size, we have seen a correlation of r = 0. 951 between PA and FM %, propping up this result obtained by Kyle et to 7 that as women, States that the PA is a limiting factor of the FM in males over the age of 25.

In our study, we have seen a lower percentage of FM in males that in women with a significance of p < 0.0005, however there is no significance regarding the BMI among both genders. Tudor-Locke et al. to [12] carried out a study in which they relate the PA with the BMI and agree that women have one FM lower than that of men, both in Caucasian as AfricanAmerican, but observed no significance in the BMI between men and women of Caucasian or African-American.

In view of these data, one might ask the need to establish relations of BMI and FM according to the study populations and concluded Fern-ndez-Real et al. to [4] in 2001 in his study of the BMI and % FM in order to come closer to social reality.

In the light of the results obtained and the bibliography consulted arises us the need to elevate this study to one larger population to obtain applicable data to it.

Likewise, we should implement programs to increase physical activity among adults. Further researches with a bigger number of subjects would be necessary as well as a more specific assessment of physical activity level to obtain really robust conclusions.