Medical Adherence to Intranasal Corticosteroids in Children: Related Factors in a Developing Country

Aim: To evaluate the factors which may be related to non-adherence to intranasal corticosteroids (ICS) in the treatment of allergic rhinitis (AR) in children.
Materials and Methods: The study was conducted on children with diagnosis AR in a tertiary hospital. All participants were provided with mometasone furoat nasal sprays for 30 days after the diagnosis was made. Caregivers were all called back when the therapy was over and filled a questionnaire about the factors that may influence the adherence to the treatment. Afterwards each caregiver filled the Turkish language validated Morisky Medical Adherence Scale (MMAS-8) form. Each factor was evaluated according to MMAS-8 score and all variables were analyzed statistically.
Results: A total number of 76 children with a mean age of 7.82 years were included in the study. The mean overall MMAS-8 score was 2.80. There was only one factor significantly related to low adherence; the number of dependent children to the caregiver (p=0.011). Besides this, 71.51% of the answers to MMAS-8 scale were compatible with good adherence.
Conclusions: The clinician must consider the factors which may lead to non-adherence while setting up a treatment plan. The demographic and socio-cultural factors must be taken into consideration and treatment schedule should be made in respect of daily activities of the children. Moreover the father could be involved in the therapy plan and support the mother especially in countries like Turkey.

Medical adherence to prescribed medications is a neglected issue in the management of allergic rhinitis, therefore leading poor treatment results. Most of the physicians focus on the treatment protocol itself ignoring the reasons that may lead to non-adherence or discontinuity. However the critical role of adherence to medication is as important as the therapy.
Medical adherence was studied before in some diseases such as diabetes mellitus, asthma or hypertension [1, 2]. These are all chronic conditions requiring long-term therapies. In the daily practice of otorhinolaryngology (ORL), allergic rhinitis (AR) is one the most common diseases in which relatively long-term therapy is needed. Since AR affects up to 40% of pediatric population it is beyond doubt that ICS are one of the most prescribed medications in pediatric ORL. Although the therapeutic effect of ICS is well described in several studies, adherence to medication in AR is less well defined.
In 1986 Morisky et alproposed a 4-items scale assessing the adherence to medical treatment which was then updated in 2008 to an 8-items scale which is still the most commonly used system to evaluate the medical adherence (Table I) [3, 4].

This study was conducted on pediatric population in the outpatient setting of a tertiary hospital. Children aged 3-16 years with diagnosis of AR were included in the study. All patients were assessed according to the ARIA (The Global Allergic Rhinitis and its Impact on Asthma Guideline) guidelines [5]. Children who had any nasal surgery before, asthma and history of previous nasal spray use were excluded. AR is diagnosed by detailed history, examination of nasal cavity, throat, ears and chest backed up with nasal endoscopy. After the diagnosis is confirmed by skin-prick test and/or demonstration of serumspecific IgE regarding the evidence of specific IgE reactivity to allergens, mometasone furoate nasal sprays 256 μg per day, administered as one puff per nostril once daily in the morning for 30 days. All the children and caregivers were called for a control examination on the 30th day of treatment and caregivers were asked to fill a questionnaire assessing the possible factors regarding adherence to the treatment. Afterwards each participant were scored according to Turkish validated MMAS-8 scale and the scores were compared with questionnaire results. Institutional review board (IRB) approved this study (IRB No: 665) [6].

Statistical analysis was performed using statistical package for the social sciences version 15.0 (SPSS, Inc., Chicago, USA). Significance of the difference between groups in terms of median values were investigated by Kruskal-Wallis test. A p value less than 0.05 was considered significant.

In this study we aimed to evaluate the adherence rates to ICS in a children population and discuss the factors which may lead to non-adherence with the literature on the subject.

A total number of 76 children (41 female and 35 male) aged between 3-16 years (mean 7.82) were included in the study. The mean MMAS-8 score was 2.80. According to the scores number of dependent children, daily working hours, age of the child and multidrug use of the caregiver had an effect on the adherence to ICS. Among all the factors only the number of dependent children had a statistically significant effect (p=0.011). Parents who had more than 2 children were less likely to adhere the therapy. Table II demonstrates all the possible factors and their influence on the medical adherence. On the other hand marital status and the education level of the caregiver were the least likely factors to affect the adherence in our study group.

* Refers to the age of the child.
** Statistically significant.

When the answers given to the questions in MMAS-8 score were taken into consideration, most of the caregivers seemed to adhere the therapy and 71.51% of these answers were related to good adherence. Among all the questions; "Did you take all your medicine yesterday?" had the highest adherence score and "Taking medicine for everyday is a real inconvenience for some people. Do you ever fell hassled about sticking to your treatment plan?" had the lowest adherence score (Table III). 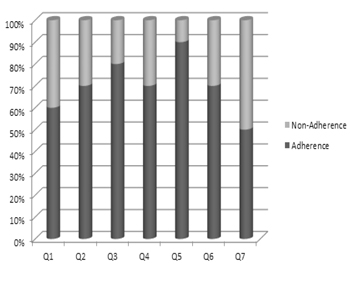 Adherence is an underestimated factor in the setting of a treatment plan which in fact is highly relevant to the outcomes. World Health Organization reported that more than half of the patients who had chronic diseases fail to continue prescribed medications [7]. In some reports non-adherence rates can be as high as 60% in chronic diseases, even 80% in preventive medicine [8]. Discontinuity to medical treatment has some consequences like extremely prolonged duration of treatment, unnecessarily prescribed drugs, low quality of life and loss in labor force. As well as this all these factors will result in budget loss. A standard 10 days treatment with medical adherence may string out to twice or three times duration causing unnecessary financial burdens to the governments.
In the last decade there have been a rise in the number of studies providing awareness on adherence. Focusing on AR, Hellings et al studied study on the patients perceived knowledge level for treatment of AR. Another study investigated the patients willingness to adhere to prescribed therapy for AR [9, 10]. In 2014 Sher et al indicated the role of patients satisfaction in medical adherence [11]. These are some of the limited numbers of studies relevant to this matter.
Yet the methodology of our study differs from those at some point. In this paper, we used to the MMAS-8 scale which is the most commonly used system regarding medical adherence. The possible factors in the cultural setting were investigated and results were compared to MMAS-8 scores.
As expected, adherence problems most likely to occur in chronic diseases and AR is one of the most common one worldwide. As summarized in the ISAAC study the prevalence of AR in children range from 15% to 37% [12]. In the treatment of AR, ICS proved to be the mainstay pharmacotherapeutics to control the symptoms. Mometasone furoate is a safe agent among ICS for clinical use particularly in children [13]. In this study adherence levels of children with diagnosis of AR and administered with mometasone furoate were investigated.
The mean MMAS-8 score was 2.80 which can be interpreted as highly adherent and 71.51% of the answers were compatible with adherence. The highest score for the non-adherent answers was for the question; "Taking medicine for everyday is a real inconvenience for some people. Do you ever fell hassled about sticking to your treatment plan?". This is meaning that even the caregivers feel difficulty about the treatment they still adhere to the plan. There were 9 possible factors in our questionnaire that may affect the adherence and according to the answers to those questions the caregivers rely on the medication and continue the treatment even they had side effects or did not seem to benefit from the therapy. When compared to the similar studies we can state that adults seem much more likely to adhere the therapy for their children than themselves.
The clinician must consider the demographic and socio-cultural factors. One of the noteworthy subjects in this respect is the position of the father in the treatment plan. In our results, the higher number of dependent children had a significantly negative effect on adherence scores. Associated with this statement it is important that the father should be involved in the therapy plan and back up the mother especially in countries like Turkey where the caregiver is usually the mother. Besides this we suggest to schedule the treatment plan in respect of daily activities of the children.
As a result the clinician must consider the factors which may lead to non-adherence while setting up a treatment plan. Thus, a few minutes with the patient regarding how important medical adherence will affect more than expected. Our study demonstrated some factors but larger study groups with longer follow-up periods are needed in further studies.