LBC versus Conventional Pap Smear in AGUS; Do we do any better with Liquid-Based Preparations?

A diagnosis of AGUS is given when glandular cells of endocervical or endometrial origin (if > 45 of age) display nuclear atypia that exceeds obvious reactive changes but lack unequivocal features of adenocarcinoma in situ (ACIS) or invasive adenocarcinoma. The percentage of this diagnostic category varies considerably. The mean percentage of AGUS diagnoses in cervical cytology in Norway is 0.18% with a range of 0.06-0.48%. At Akershus University hospital (Ahus) 0.09% of cervical cytology diagnoses were AGUS in 2016. Our department changed from conventional to liquid-based slides during 2013-2014. The aim of our study was to see if the introduction of LBC had had any impact on the diagnosis of AGUS. We compared two cohorts of cervical smears: a three years cohort (2011-2013) of conventional Pap smears and a three years cohort (2014-2016) of Sure Path LBC smears. There were 82 women in the conventional Pap smear cohort (0.08%) and 95 in the Sure Path LBC cohort (0.09%) and all had histologic follow-up. There was no statistically difference in the results of the two cohorts. In conclusion, our major challenge in the diagnosis of AGUS are the cytological criteria and not our preparation method. 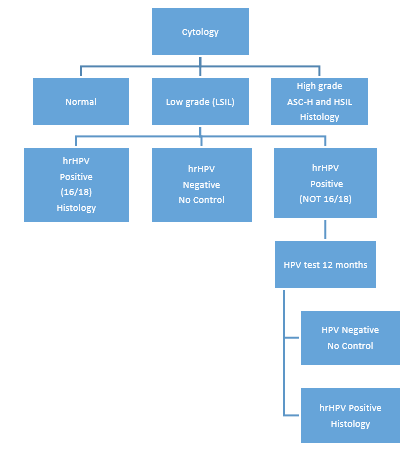 A diagnosis of AGUS is given when glandular cells of endocervical or endometrial origin (if > 45 of age) display nuclear atypia that exceeds obvious reactive changes but lack unequivocal features of adenocarcinoma in situ (ACIS) or invasive adenocarcinoma [2]. The diagnostic criteria might be considered vague and not very specific. Consequently, the percentage of this diagnostic category varies considerably, and the results of histologic follow up likewise. The international literature gives percentages of AGUS in cervical cytology ranging from 0.047% to 0.6% [4-7].  The reproducibility of the diagnosis is reported ranging from poor to moderate [8, 9].  Follow-up histology is reported to be benign in > 50 % of cases in most studies [5,6,10,11].

Liquid-based preparations (LBC) were introduced in Norway with the introduction of HPV testing and practically all cytology laboratories now use either Thin Prep (Hologic) or Sure Path (BD) LBC for cervical cytology diagnostics. Our department changed from conventional to liquid-based slides during 2013-2014. The aim of our study was to see if the introduction of LBC had had any impact on the diagnosis of AGUS. We wanted to compare two cohorts of cervical smears: a three years cohort (2011-2013) of conventional Pap smears and a three years cohort (2014-2016) of Sure Path smears.

Women with at cytological diagnosis of AGUS in the department’s computer system (Doculive Patologi) were identified according to topography/preparation code (conventional or LBC) and the morphology code for AGUS (M81401). There were 82 women in the conventional Pap smear cohort (2011-2013) (82/91983 = 0.08%) and 95 in the Sure Path LBC cohort (2014-2016) (95/99525 = 0.09%). Some had more than one cervical smear and the total number of smears was 214. Histological follow up had been done on all women within one year. The histological diagnoses were grouped as benign, premalignant and malignant. One biopsy with a non-specific diagnosis and two cases without representative tissue material were grouped together. As for AGUS cases, the first period represents cases diagnosed on conventional Pap smears and the latter on LBC slides. The percentages of cytological ACIS diagnoses in the two periods was calculated from the database for comparison, but ACIS was not within the scope of this study and thus not further examined.

For statistical calculations premalignant and malignant were grouped together. The benign and the “no diagnosis” categories were likewise grouped together as benign. Chi-square test with p-value was calculated for possible significant diagnostic differences between Pap smear and LBC preparations.

An overview of the diagnoses is given in Tables 1 & 2. Chi-square test did not show any significant differences between the two preparations methods. P-value for findings in the cervix in Pap smears versus LBC smears was 0.06 and for endometrial findings 0.88. Thus, there was no significant difference in premalignant/malignant findings in the cervix or the endometrium in Pap smears versus LBC slides. Histological diagnoses in cervical lesions were benign in 48% (38/78) of Pap smears and in 61% (38/78) in LBC slides. Histological follow up for endometrial lesions were benign in 61% and 65%, respectively, for Pap smears and LBC slides. The percentage of cells (thought to be) of endometrial origin was larger in LBC slides than in Pap smears 39% (46/118) versus 19% (18/96).

Table 1: Overview of cyto-histological correlation according to number of smears.

According to Table 2 this would apply to both benign and malignant lesions.

*AGUS cells presumed to be of endometrial origin, but turned out to be endocervical ACIS.

# including polyps, cilia and squamous metaplasia, inflammatory and hormonal changes.

LBC preparations have a superior morphology over Pap smears. In conventional Pap smears, we often struggled with technical artefacts as to smearing technique and suboptimal fixation as well as obscuring amounts of blood, granulocytes, debris and mucus. Despite that, our AGUS results show that we do not do significantly better with LBC slides. These findings are in accordance with Wang et al. [12].

As in the literature [5,6,10,11], the majority of our cases were histologically benign, and there was no significant difference between the two periods. We seem to see more endometrial cells, but the majority are benign on follow-up, and the differences are not significant. Could we have improved in other ways? The percentage of ACIS increased from the first to the second period, suggesting that we gave more specific diagnoses after converting to LBC. The absolute numbers were low, and random variations must be taken into consideration.

Other studies have found that subcategorization of AGUS may give a higher yield of significant lesions in specific subgroups [11,13-15], namely AGC (atypical glandular cells) favor neoplastic versus AGC NOS. Recommendations in Norway do not include this subcategorization and is not routine in most national laboratories. Lee et al. [13] demonstrated increased use of AGC favor atypical endocervical cells versus AGC NOS in LBC slides.

Our LBC material enable the investigation of adjunct analyses as HPV and immunocytochemistry (ICC) for selected markers, but none are in routine use or as general recommendations. Detection of high risk HPV [16] would underscore the need for histological work up, but a negative HPV would not obviate it. The same applies to ICC markers. Risse et al. [17] found that the additional use of cell blocks increased the yield of significant lesions to 61.5%, due to detecting benign columnar lesion mimics which might have obviated  histological work up in such cases.

Our material does not allow us to assess the long time risk of malignancy. Wang et al. [7] found a high and persistent risk of cervical cancer (especially cervical adenocarcinoma) for up to 15 years in a Swedish study. The demographics of the populations in Norway and Sweden are quite similar. We can assume that the risk of an underlying malignant or premalignant lesion is of the same magnitude in Norway, and our current practice of follow up is justified and in compliance with international studies [10,13,15].

In conclusion, our major challenge in the diagnosis of AGUS are the cytological criteria and not our preparation method. The enhanced morphology may allow us to diagnose more cases accurately as ACIS, but within the AGUS category the morphological abnormalities are often discrete and there is overlap of criteria of a number of benign columnar lesions and malignant or premalignant ones.