Traumatic hand injuries are an important aspect of reconstructive surgeon practice. Delayed recognition or improper management of hand injuries can have long-term consequences for patients’ quality of life, function, and work productivity [1]. The finger and especially the thumb, are the most important organs of tactile sensibility. Thumb defects with exposure of tendons, bone, or joints present a challenging reconstructive problem. The highest priority to preserve function, sensibility, and aesthetics is the immediate coverage of the wound. For reconstruction, a variety of flaps and the semiocclusive dressing technique are commonly used [2].

Among the numerous flaps described in the literature for thumb reconstruction, Littler’s heterodigital neurovascular flap and Foucher’ first dorsal metacarpal artery flap are particularly useful in resurfacing distal thumb volar defects [3]. We present the case of a 42-year-old male patient with a wound on the dorsal surface of the thumb managed with a first dorsal metacarpal artery flap after a thumb trauma.

It is a 42-year-old male patient who does not have an allergic history, no surgical history or a chronicodegenerative history. He begins his current condition two days before his admission to our unit, suffering right thumb trauma after being involved in a car accident presenting thumb crush, he suffers a wound on the dorsal surface of the first finger managed by primary closure in another institution. Then, he presents necrosis of the cutaneous flap, reason for which it comes to our service for valuation. Physical examination revealed a right hand with a necrosis on the dorsal surface of the thumb in the region of the distal phalanx, as well as ungueal hematoma. Palpation presents digital tip crepitation and pain, which it was also present at mobilization. The radiograph shows intraarticular fractures of the proximal and distal phalanx. The admission of the patient to hospitalization was decided and management was started with intravenous and analgesic antibiotics. 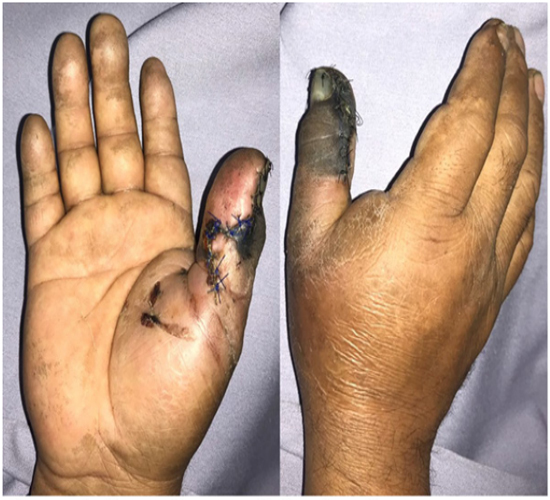 Figure 1: Necrotic area of the thumb.

Debridement of necrotic tissue was carried out in the operating room, leaving a wound area of 3 x 5 centimeters on the dorsal Surface of the thumb, then we proceed to perform internal fixation with open reduction of distal and proximal phalanx fractures by placing wire and 0.35mm Krischner nail. Subsequently we proceed to design the cutaneous island of the first dorsal metacarpal artery flap, posteriorly the pedicle of the flap was exposed by a curvilinear incision ranged from the radial border of metacarpophalangeal joint to the first webspace. Distally, the flap was elevated in a plane superficial to the paratenon to ensure a good recipient bed for skin grafting. Proximally, the neurovascular pedicle was elevated in a suprafascial mode over the first dorsal interosseous muscle. Dissection of the pedicle was continued more proximal, between the ulnar head of the first dorsal interosseous muscle and the second metacarpal bone allowing a generous arc of rotation, the flap was transferred through a skin tunnel to the dorsal thumb and then the donor area was covered with a fullthickness graft. A splint was placed on the volar surface of the first finger to limit flexion and abduction of the first finger to avoid elongation of the pedicle. Control radiography was performed showing adequate reduction of fractures of the distal and proximal phalanx. The patient presented adequate postsurgical evolution, leaving the hospital on the second postoperative day.

Thumb reconstruction goals include the restoration of thumb length, strength, position, stability, mobility, sensibility, and aesthetics. It is a rare event when all of these objectives can be achieved, and prioritization should be based on the goals and functional demands of the patient [4].

Small injuries without phalangeal exposure are best treated with dressing changes alone. Healing by secondary intention allows the self-recruitment of sensate soft tissue without any donor-site morbidity [5]. For injuries exceeding 1.5 cm2 without exposed bone or tendon, full-thickness skin grafting from the hypothenar eminence or wrist or groin crease may be advantageous. The Moberg flap is indicated for defects not exceeding 1.5 cm in diameter, whereas may be complicated by flexion contracture or joint stiffness [6]. 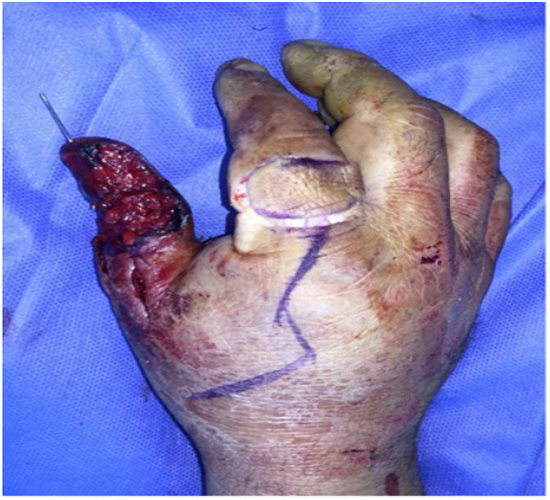 Figure 2: Wound area of the thumb and design of the first dorsal metacarpal artery flap.

For the situation of phalangeal bone exposure with a limited soft-tissue deficit, many homodigital tissue rearrangement strategies have been described. In cases of phalangeal exposure with volar soft-tissue loss exceeding 2 cm2, heterodigital reconstruction is often required. In the case of extensive dorsal or volar bone exposure, first or second dorsal metacarpal artery flaps are reliable options, with constant anatomy and minimal donor-site morbidity [7]. 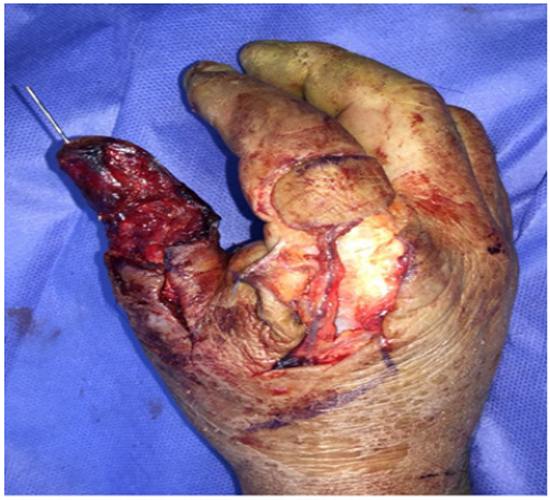 Figure 3: Disection of the flap. 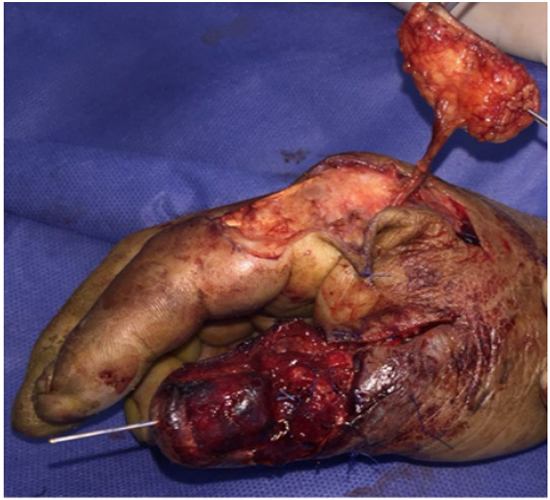 First dorsal metacarpal artery flap was first described in 1960 by Kuhn and Holevitch, who used the skin of the dorsum of the proximal phalanx of the index finger as a donor area for fasciocutaneous flaps [9]. The first dorsal metacarpal artery flap is a heterodigital flap, in which soft-tissue from the dorsum of the index finger proximal phalanx is transferred based on the first dorsal metacarpal artery. Sensation is permitted by including a branch of the superficial radial nerve [10]. Primarily intended for the coverage of dorsal defects, the kite flap today is frequently used to restore thumb sensibility in pulp loss. It provides immediate sensibility that is sufficient for most activities of daily living. It is particularly suited for older patients, in whom nerve coaptations, as they are performed in free pulp transfers, usually do not yield satisfactory results [11].

The disadvantage of these heterodigital technique is the violation of a normal digit for the reconstruction of the thumb [11]. 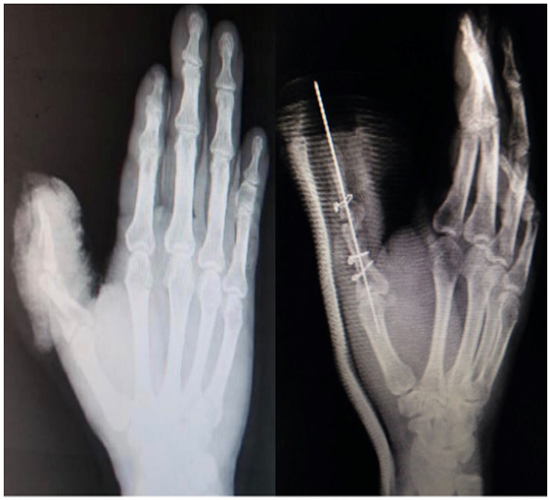 Figure 5: radiography showing fracture before and after open reduction with internal fixation. 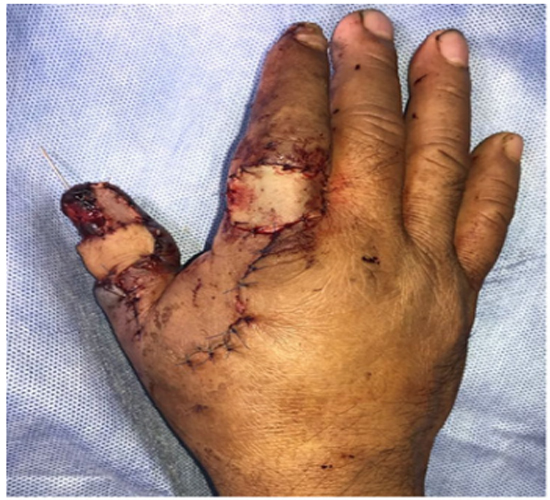 Reconstructive surgeons must take into account the First dorsal metacarpal artery flap, because it is a versatile flap that can be useful to solve problems of hand coverage, especially for the first finger. It is a flap that in addition to offering an island of skin with sensitivity, it offers the option of being used with anterograde flow and reverse flow according to the need of the defect to be covered.